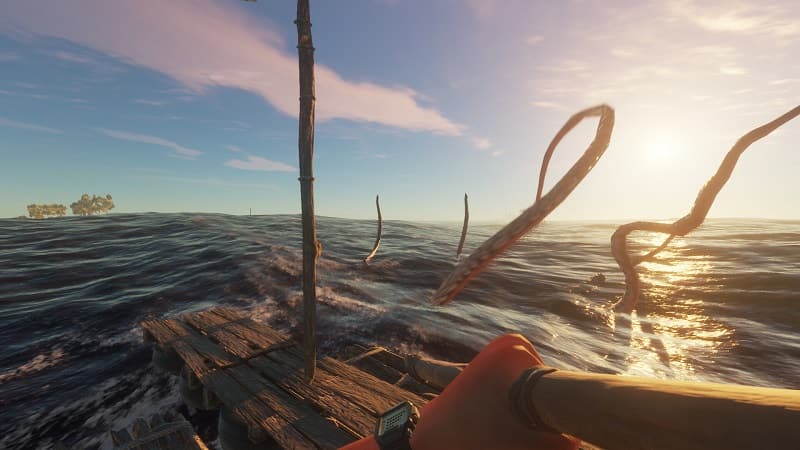 Despite being relegated to the darkness of PC early access for the better part of a half decade, interest in Stranded Deep’s survivalist sandbox beats has nonetheless remained unusually high. Certainly, after just a few hours with the survivalist focused title in its PlayStation 4 incarnation, it’s easy to see why – even if Stranded Deep on PS4 does suffer from some UI issues and a comparative lack of content compared to its older PC counterpart.

A Welcoming And Solid If Flawed Open World Survival Effort

Stranded Deep begins in a fashion that is hardly unlike other sandbox survival sim in so far as you find yourself on a commercial plane before said plane takes a nose dive into the drink and you must escape, securing a life raft in a bid to spirit yourself away to the safety of the nearest deserted island in order to eek out a new feral existence. If such a spectacle elicits memories of fellow sandbox survivalist effort I’d not blame you, but thankfully there are no multi-limbed mutant cannibals trying to tear you limb from limb here. A win!

Instead, Stranded Deep unfurls at something resembling a much more leisurely pace. As you take your first steps onto the procedurally generated island chain, there’s nothing trying to murder you in earnest which means that you can take things pretty slowly as you find your feet under Stranded Deep’s table of numerous survival mechanics.

On that topic and like other decent survivalist efforts worth their salt, Stranded Deep also recognizes that its survival sandbox and the tricks contained within it are sizable. So rather than dropping the player in the deep end so to speak, it instead manages to successfully acclimate the player to its nuances through a handy tutorial which provides an easy way to get to used the game’s exploration, progression and crafting systems.

Speaking of progression, Stranded Deep very much subscribes to the Skyrim school of such matters, meaning that the more you do something such as crafting, swimming and other activities, the better you get at doing them. Though it’s something of a shopworn mechanic at this point, it nonetheless makes a lot of sense in the context of Stranded Deep.

Ultimately, the main thrust of Stranded Deep’s appeal is that it does a good job of making you feel like you’ve not just been stranded on a desert island, but also in the sheer amount of other stuff that you have to do in order to surprise. Though Stranded Deep’s crafting and combat systems are all fairly standard for the genre, it’s really in the nuance of things that the game starts to stand out.

Even though Stranded Deep’s insistence that the player stay fed, rested and hydrated are hardly revelations for the genre, players must also deal with overexposure to sunlight too – as spending too long getting hammered UVs can result in sluggishness and, if left untreated for too long, death. Luckily, if you can find yourself some shade under a leafy tree or other such cover, you can recover fairly quickly.

In other games of similar ilk, the micro-management of such aspects of your well being can seem a touch tedious when you’re having to deal with aggressive enemies or other elements of the game that drag your attention away. In Stranded Deep however, such concerns are always front and center, as your handy smart watch allows you to keep track of your vitals.

Playing further into Stranded Deep’s bespoke desert island appeal is the fact that the encourages you to explore. Once you’ve reached a plateau of relative mastery when it comes to stabilizing your well being, there is quite simply a lot of fun to be had in diving down to ancient shipwrecks, uncovering lost artifacts and encountering little known aquatic species. Certainly in this sense then, once the satisfaction of improving your crafting skills starts to wear off, the procedurally generated islands of Stranded Deep always ensure that there is some fresh secret to discover or marvel to stare slack-jawed at.

Elsewhere, should you spend the hundreds upon hundreds of hours necessary to become bored with the game’s main campaign, Stranded Deep’s Cartographer mode has your back, as it allows you to create islands of your own complete with their own values, parameters, wrinkles and quirks. To say then that Stranded Deep will certainly keep you busy is something of an understatement.

From a visual standpoint, Stranded Deep certainly looks the part too. Leveraging the Unity engine, Stranded Deep does a grand job of showcasing its idyllic desert island setting with aplomb, as crystal blue coral waters lap lazily against sandy beaches, while the shadows cast trees slowly sweep over your head as the sun slowly sets, casting an explosion of blazing hot color across the horizon. Sure, there is some physics jank where limbs occasionally stick through solid objects and so forth, but for the most part, Stranded Deep is really quite easy on the eye – especially when played on PS4 Pro.

Sadly, as enjoyable as I found Stranded Deep to be, there are a few flaws embedded in the dusty sands of this desert island survival odyssey which detract from its overall offering. Though this is a minor thing, Stranded Deep will only let you save when you’ve fashioned yourself a shelter or a sleeping bag, and sure while it doesn’t take you too long to make the former, it essentially means that you’ll be forced to play at least for 2-3 hours before taking a break from the game entirely. For some folks this might be fine, but for others who might just want to dip in and out of the Stranded Deep experience, it might not seem quite so reasonable from a design standpoint.

Another issue with Stranded Deep is the loading times. Hopefully fully eradicated by the PlayStation 5’s SSD, loading times for Stranded Deep at the point of initial world creation on PS4 Pro is something approaching a minute in length, which, to be honest, isn’t really that great at all. Then again, that’s what smartphones and mucking about with the pets is for though, right?

Elsewhere, the inventory system is also frequently clumsy to the point of occasional red-faced rage. For example, if you have the materials to craft an item, but are at the capacity limit, the game won’t allow you to craft the item until you make an extra space in your inventory. Though this is pretty much the prime sort of thing that would get fixed in a patch – its presence in the day one release code is still aggravating all the same.

Arguably though, the biggest drawback of Stranded Deep’s PS4 debut is the pared back multiplayer functionality – in that it doesn’t have any. Disappointingly, the split-screen co-op and online multiplayer modes seen in the latest build of Stranded Deep on PC are both nowhere to be seen on PS4, which is something of a hugely egregious omission. Again, this functionality could (and should) feature in a future Stranded Deep patch update, but it’s really difficult not to be peeved at its omission in the release build of the game.

In the end, Stranded Deep does a commendable job of fulfilling its stranded desert island premise. It looks the part and the compulsion to seek out mysterious treasures and rare sea creatures is in turn, neatly balanced with surviving shark attacks, keeping yourself healthy and building your own private house on the island. Though a handful of flaws currently detract from the sum of its parts, Stranded Deep nonetheless scratches that desert island survival itch in the sort of blissfully relaxed way that no other game is able to right now.

Stranded Deep is out now on PlayStation 4.

Though not quite stellar, Stranded Deep does a decent enough job of enabling the player to live out their castaway fantasies. It's just something of a shame that the occasionally clumsy UI and lack of multiplayer functionality make the game a little less compelling than it needs to be. Nonetheless, those looking for island bound thrills of escaping deadly shark attacks, delving down into forgotten wrecks and living the life of an island castaway will find much to love in Stranded Deep on PS4.