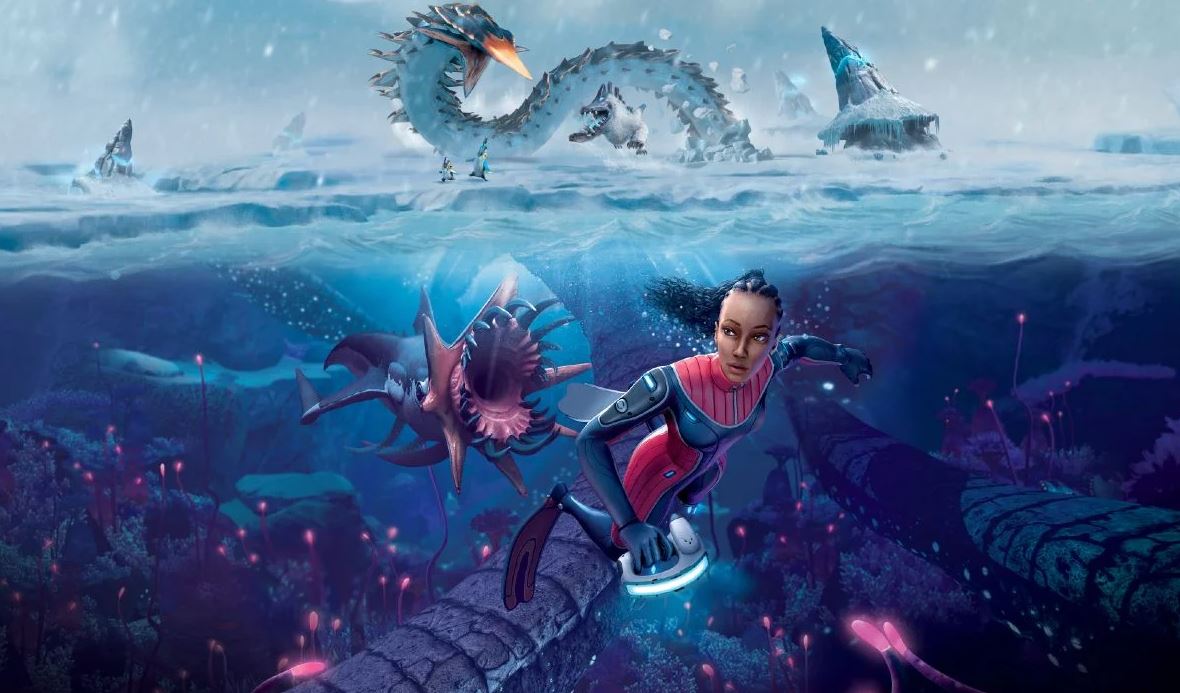 Subnautica: Below Zero PS5 Review – Off the back of 2018’s critically acclaimed Subnautica, Unknown Worlds Entertainment have seen fit we get another aqueous escapade with a successor, Subnautica: Below Zero. Much like the predecessor, Below Zero is a first-person survival adventure game of the same blueprint. However, there are new game mechanics and crafting options, as well as a greater emphasis on the story that makes this recent instalment somewhat distinguishable from the first game.

New features aside, Below Zero is not really an overhaul of the Subnautica formula. But as they say, if it isn’t broke, don’t fix it. Subnautica: Below Zero is a worthy and addictive successor that will have you sinking hours upon hours into what it offers.

Thrown In The Deep End

The beginning of Subnautica: Below Zero somehow manages to simultaneously overwhelm you, yet completely submerge you within its immersive grip. The player is thrown into an alien ocean with nothing and no direction. The boundless freedom this presents, considering the vastness of the world map, is actually very intimidating. The only limitations you suffer, are that of self-maintenance, as you constantly battle the elements and entropy. The combination of these factors makes for a gripping effect that lasts the duration of the game.

The world map features a rich variety of captivating environments, which is an impressive feat in of itself, considering the majority of the game is underwater. Subsequently, your explorative curiosity never ceases to be stoked. It always feels like there’s more worth exploring, with only fear of what lies in the abyss holding you back.

It is quite something to be held in perpetual intrigue, yet constantly daunted by a potent sense of vertigo you inescapably feel whilst hovering in the deep. The game also features some perilous over lands, which at times can evoke an even greater sense of insecurity. 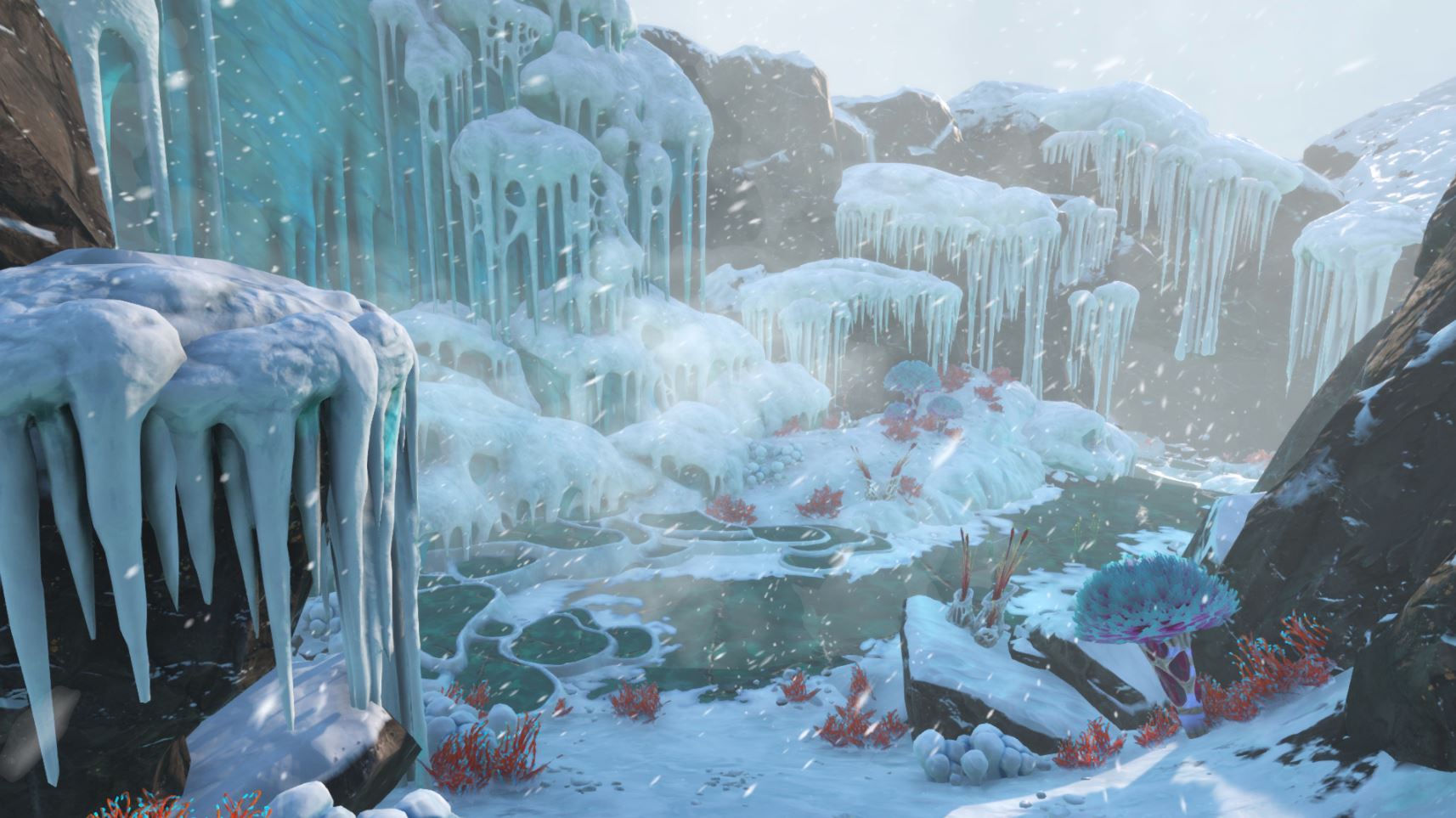 The overall graphical presentation hasn’t really been lifted from what we see on 2018’s Subnautica. In fact, a lot of the models look fairly dated for a Playstation 5 title. That being said, the quality mode does give a nice sparkle to the screen, and generally, this is a game that works acceptably well at 30 FPS. The framerate mode really relies on the games wonderful art style to inspire your awe, and by and large, that’s enough to keep you engaged.

At the face of it, the core loop of the game is incredibly simple. You swim, collect, and craft. Where Subnautica: Below Zero captures you, is with the stakes you face on every trip for resources. You must eat, hydrate, and keep yourself from getting hypothermia (the latter being a new feature to the franchise). Furthermore, you must also survive harsh weather, and the many predators that prowl whilst you’re enduring the anxiety of ever depleting oxygen underwater. In writing, it reads like a nightmare, but the reality is a true thrill ride from a game that does so much with so little.

The construction elements of the game can consume your attention to the point where you forget there’s even a story here. The process begins with finding a small research pod nearby ground zero, where you can fabricate devices from natural resources that you collect in the environment.

By crafting some initial items to improve your mobility and intel gathering (most notably the scanner), you can then go on to build your own base, as well as upgradeable transport vehicles. From here, Subnautica: Below Zero becomes an enormous timesink that you just can’t pull yourself away from. 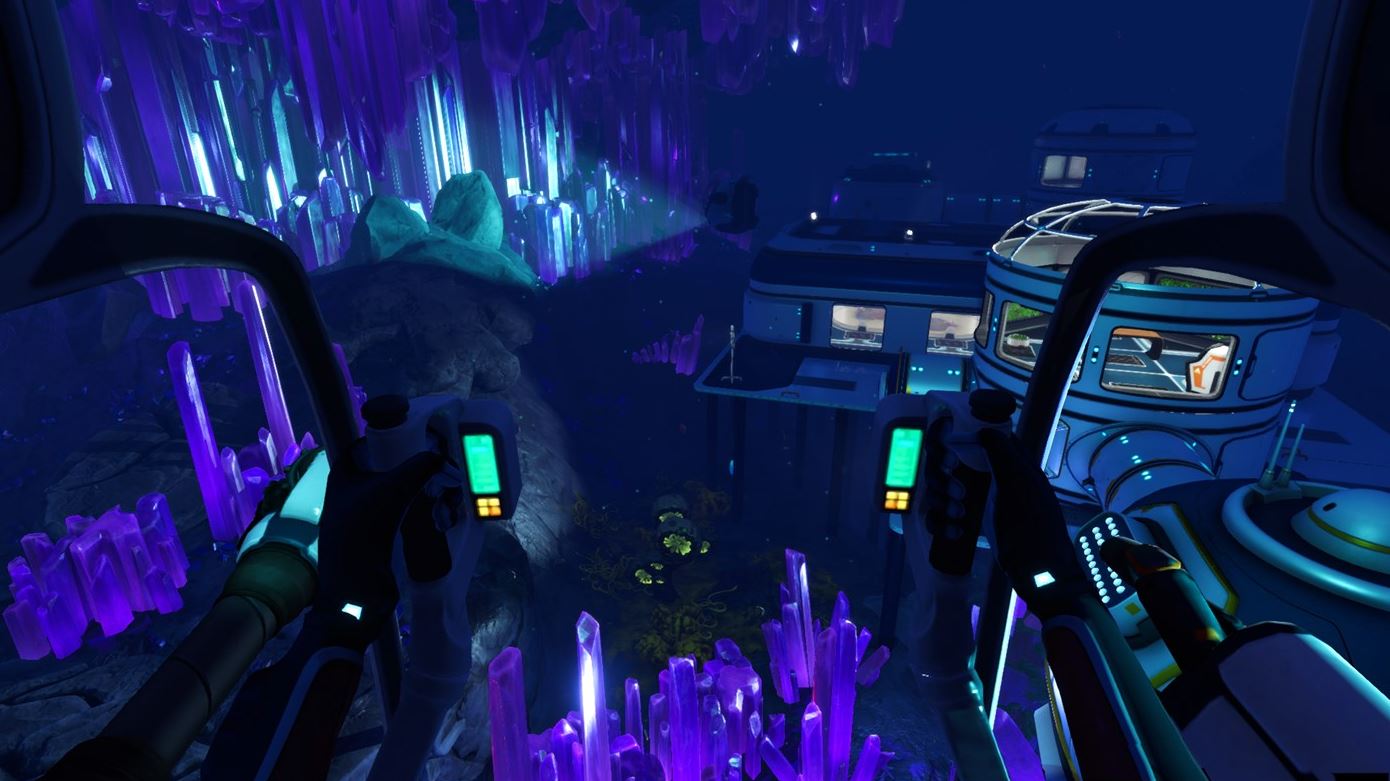 There’s something innately fun about building bases, but in the case of Below Zero, there is a bigger purpose to doing so. Everything you do costs something and constructing a means to make yourself resource-efficient is key to the game. New bases can hold more storage, fabricators, and can also perform more advanced functions, such as scanning for minerals and recharging power supplies.

Bases also can house and recharge your constructed vehicles, which are the necessary prerequisite for being able to properly explore deep areas. The Seabus can act as a portable base that braves the depths, and can even carry the Prawn Suit, which is ideal for scavenging the ocean floor in tight areas. All of these are made possible by scanning the debris of sunken tech, which in turn is used to craft items to access even more debris to scan. It is an impossibly addictive loop that could easily steal your whole day away from you.

PS5 features aren’t really being used to their potential in Below Zero, unfortunately. The DualSense speaker is used for audio logs, but the haptic feeback effect seems to be fairly basic. Activity Cards will load you into your last save only, but to be fair, there isn’t much opportunity for them to be used elsewhere.

There’s a constant balancing act that Subnautica: Below Zero manages to pull off with amazing success. The game includes a greater emphasis on the story than the predecessor, yet it never feels like the feeling of freedom, agency or creativity is never compromised. The game has an almost invisible hand that seems to guide you towards furthering the story, and possibly more excitingly, newly accessible resources for building. 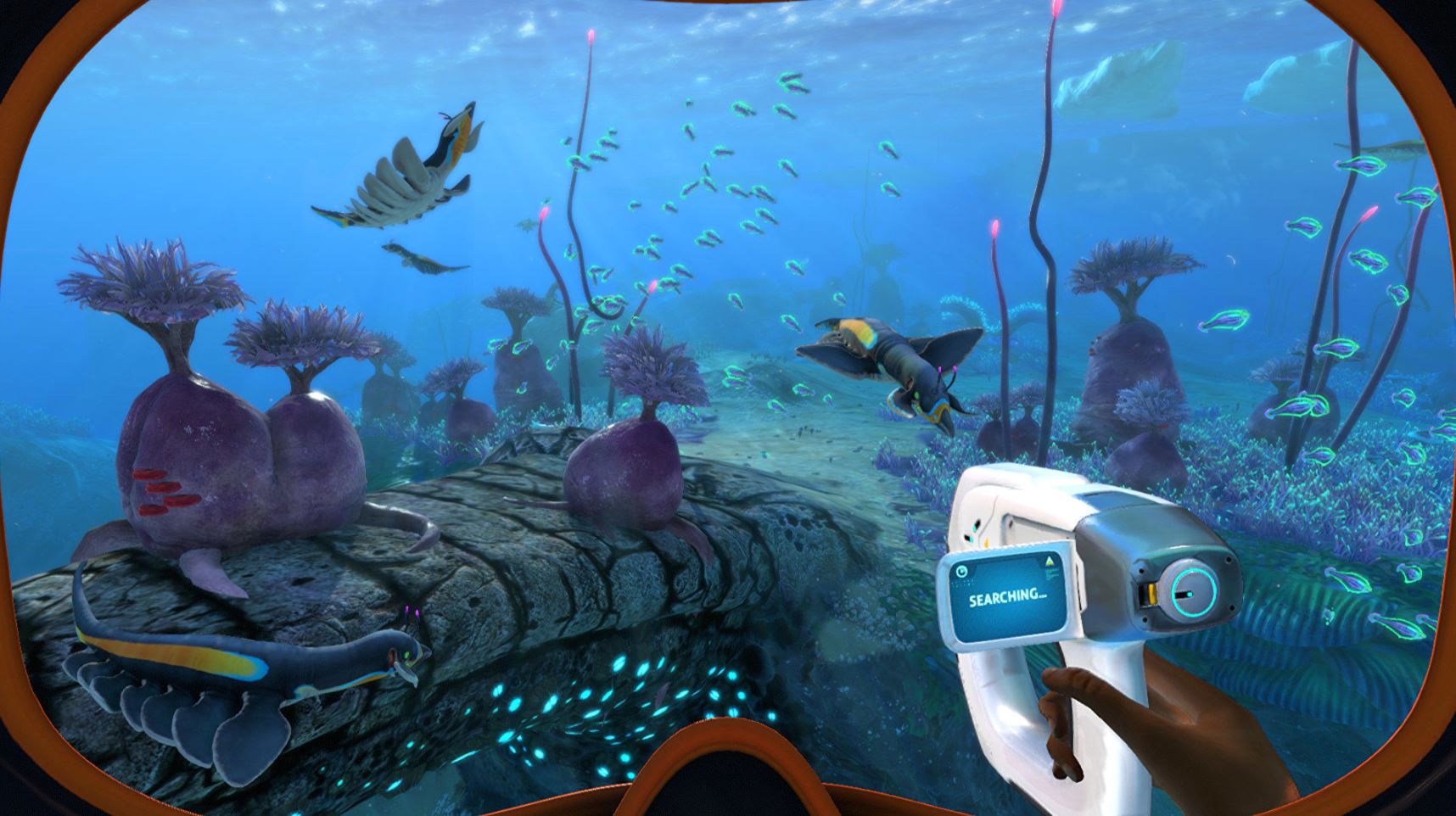 The story features a protagonist, Robin, who is investigating the fate of her sister that had previously landed on the alien planet, 4645B. In her investigation, she becomes entangled with an alien known as a Precursor, a species mentioned heavily in the original Subnautica game.

Their plots intertwine, and cross paths with other sentients in an unfolding mystery that explores the Subnautica lore, and provides a compelling incentive for your explorative efforts. However, that is if you even choose the story mode, to begin with.

The game features 4 modes; Survival, Freedom, Hardcore and Creative. Survival and Hardcore give the full range of parameters to the experience, with an added permadeath for Hardcore mode. Freedom works similarly but without food, water, or temperature to be concerned about. Creative mode gives you the full map, but with immortal agency and unlimited resources to build to your heart’s content. Unfortunately, the story is disabled in this mode, but that isn’t even the biggest casualty to the game’s structure.

The real driver of the game is the incremental complexity that you must contend with, in order to expand your utility. As the game progresses, the demand for upgrading your equipment becomes more challenging. Each successful upgrade then grants you the ability to venture into new areas, salvage an even greater variety of resource, and the cycle repeats.

Creative mode robs you of this sense of achievement you’re always chasing in other modes, although it does offer a nice way to experience the building and exploration of the game. In particular, it works well for those that don’t have the nerve to endure the perils of Survival mode. Ultimately it is good to have options, and there are certainly various ways Subnautica: Below Zero can be enjoyed for everyone. 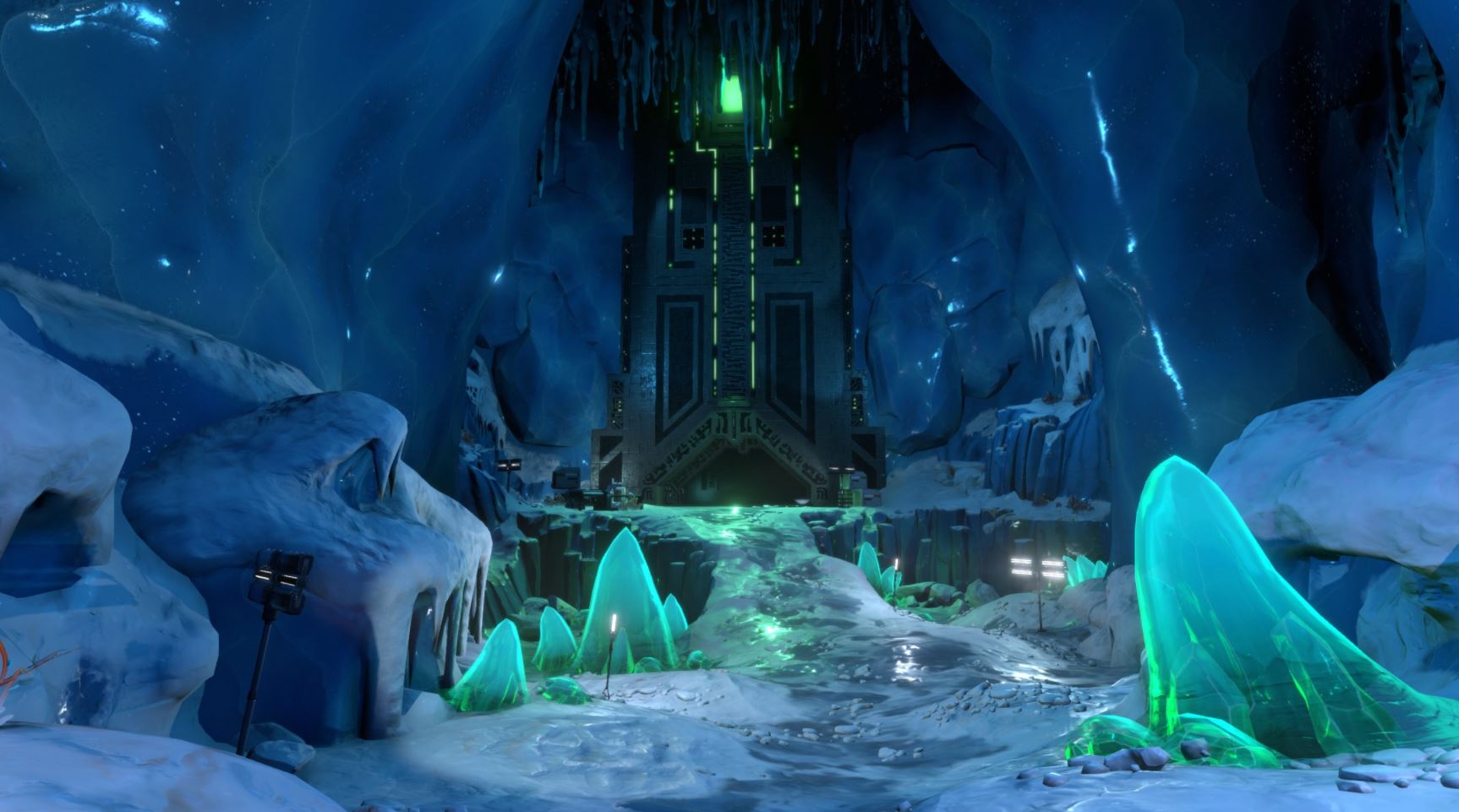 An Addictive Follow Up That Reaches The Heights Of The Original

When compared to the first Subnautica game, Below Zero is really a small, iterative improvement, and as a result, probably won’t have the same impact on returning players. However, especially for newcomers to the franchise, this is the perfect jumping-in point. Below Zero is a captivating, addictive and thrilling experience that hits every height of the original, and then some.

Despite being a fairly niche genre, Subnautica: Below Zero succeeds in borrowing elements from a variety of categories that broaden the appeal of the game. The creativity and agency of building bases, the wonder of exploration, and the sheer horror you experience escaping the pursuit of beastly leviathans in the dark of the ocean certainly caters to a broad palette of tastes.

It would be curious to see what could be achieved with this franchise if given a bigger budget, but even without, Subnautica: Below Zero is a substantially attractive offering that can hang with the titles out there.

Subnautica: Below Zero is a sublimely addictive timesink and an exemplary survival adventure game that transcends the genre. The improvements to the formula of the original game are minimal but impactful. Fans of the franchise will certainly have plenty to get into, and the appeal is broad enough to welcome many more newcomers to the experience. Whilst there is little ground broken in terms of visuals, Subnautica: Below Zero more than compensates with an all-round stellar experience that rivals that of bigger budget productions.