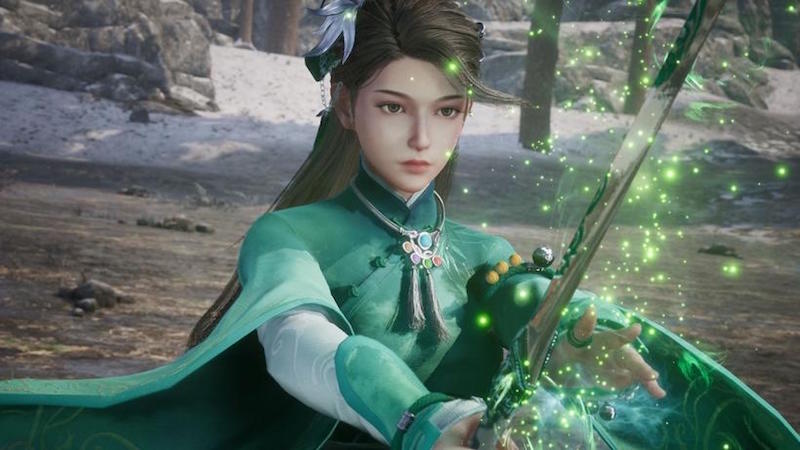 Sword and Fairy: Together Forever PS5 Review. In recent years, Chinese games have seen a boom in global exposure, providing new opportunities for different mythos to be explored and new outlooks to experience. Genshin Impact opened that door wide, and continues to remain popular. Unfortunately, games like Sword and Fantasy Together Forever don’t receive the same level of resources and, thus, suffer for it.

The story of Sword and Fantasy: Together Forever revolves around deity Xiu Wu and human swordswoman Yue Qingshu. During their journey, they bring in several party members that all wish to help bring peace to the realm.

However, the element deities of the realm are out of control, and the team must uncover why the deities aren’t themselves. Combine that with several different groups vying for control of the deities and the realm, and the drama quickly mounts. 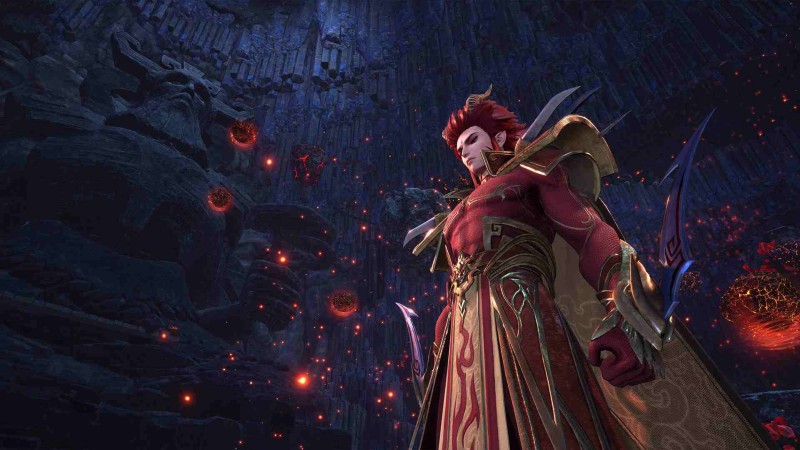 The story plays out mostly through cutscenes rather than gameplay. Most story beats delivered while actually playing the game occur when nothing happens. Considering the Chinese voice acting, this approach favors its use of subtitles.

Every once in a while, some line of dialogue pops up in the middle of an action-packed cutscene. Other times, characters speak during fights. I sometimes managed to catch what people said, and they sometimes gave you hints to handle a fight. The strategies to beat these foes never require much thought, but constantly missing information grows frustrating quickly.

One significant downfall to Sword and Fairy is its quality of writing. Some of it comes down to what I can only discern as a very literal translation job. Mostly, though, it comes down to dialogue that is presented in unnatural ways, particularly when trying to establish past events.

As an example, the game uses phrases that try to pack in tons of information with no natural flow or introduction to it. To get the idea, they say things like, “You obtained an item from this sacred land, which is where the [completely unrelated weather pattern] occurs.” 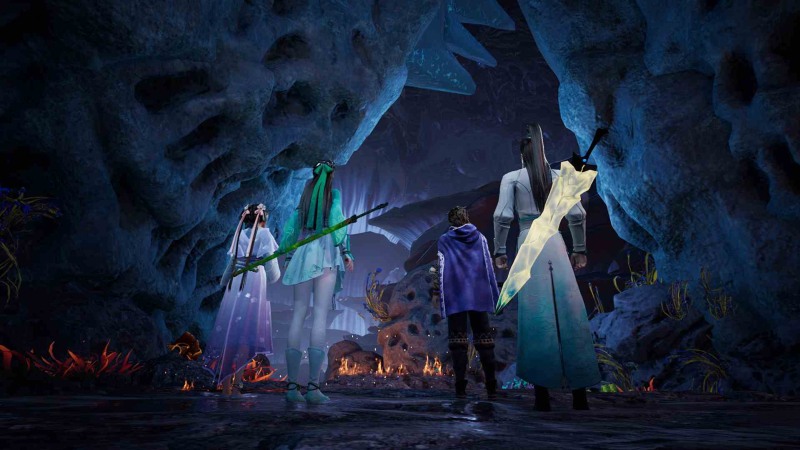 While this adds to the breadth of the world, indicating random tidbits deflects from the moment and breaks any established immersion. I see this type of writing far too often, and it adds to the lull that the game already creates.

Starting Off With A Whimper

Unfortunately, the opening hours create one of the biggest hurdles in Sword and Fantasy Together Forever: a start that drags at a snail’s pace. After a bombastic opening, your characters spend hours and hours between conversations around your starting zone and running back and forth on fetch quests.

Combine odd writing with long bouts of borderline redundant narrative development, and you need a ton of discipline to pursue the game further.

Sword and Fairy does little to hide its repetitive nature. At its core, the game asks you to follow quest giver directions between story beats all while numerous NPCs tell you all about the world and situation ad nauseum. To make things worse, the place or item you need to reach in order to complete those quests often sit across the entire map, making you run across eventless expanses. 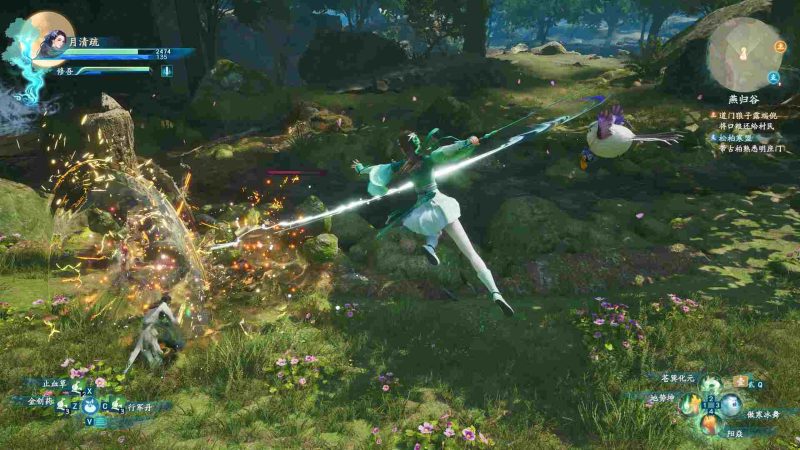 Fundamentally, Sword and Fairy plays like an MMORPG, right down to the simple combat mechanics. As the characters level, they gain new skills naturally. They don’t require manual levelling, and equipment is always upgraded and purchased from vendors. If there had been a way to thin out how much of this tedium you face early on, then the introduction wouldn’t have suffered so immensely.

Combat, In All Its Forms

Simplicity plays into this game on all fronts, but one part of the game benefits from that simplicity. Boss fights offer a great deal more than the rest of the game, with many of them asking you to approach it in a different way. One boss asks you to outdo its self-healing by corrupting it, and another demands that you destroy its roots before doing any damage to it.

Unfortunately, I faced several glaring issues when fighting bosses. Sometimes, they somehow go immune unnaturally and one shot me. I fought these bosses several times, so I got a feel for how the fight should go. 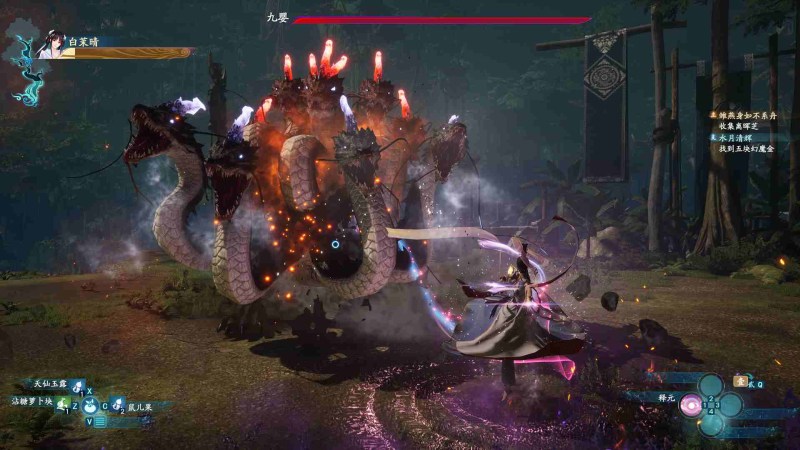 In a couple instances, some bosses have attacks that go through barriers while other attacks don’t. And other times, some of those attacks go through barriers anyway. Considering most of these fights last for ten minutes or more, constantly restarting due to cheap deaths doesn’t motivate you to keep playing.

Making The Best Of A Bad Situation

A few random points stick out as successes. In the sea of frustration I experienced, these points deserve recognition. For one, enemy designs absolutely rock. No two bosses look alike, and each zone features its own type of enemies. While most of the characters in the game look somewhat generic, the enemies stand out wonderfully.

The graphic fidelity of Sword and Fairy is pure eye candy. While nowhere near realism, the style features clean sprites and eye-popping spell effects. Colors and spells jump off the screen and are nothing short of gorgeous. The characters themselves don’t show facial expressions of any kind, but they sure do make some pretty spells. 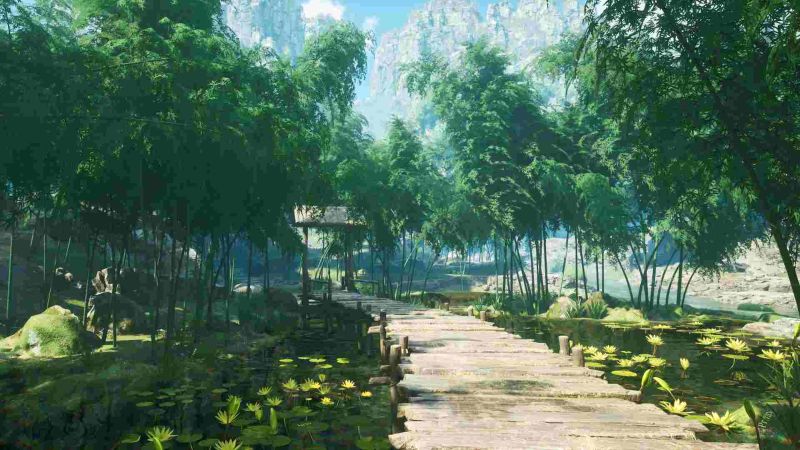 The game attempts to break up the monotony by presenting you with different scenarios along the way that change gameplay elements for a bit. One sees you sneaking around and throwing stun bombs at people, another asks you to manually hunt for chickens, and my personal favorite asks you to do a little bit of snowboarding. While the game lacks steady pace, it certainly offers fun breaks in the tedium along the way, even if they’re short-lived.

Only A Few Reasons To Test The Waters

Sword and Fairy Together Forever attempts to present an action-RPG with numerous unique experiences along the way. What we actually get is a few intriguing story and gameplay beats engulfed in a basic MMORPG formula, complete with incessant fetch quests and an unpolished narrative.

Hardcore RPG fans may want something like this to cleanse the palette, and they will find some things here that catch their eye. Unfortunately, the potential sitting just underneath the surface can’t break through the ice.

Despite its potential, Sword and Fairy: Together Forever gets bogged down by a slow start, odd writing, repetitious fetch quests, and unpolished boss mechanics. Occasional variety in gameplay and well put together segments can carry the day for some, but too many lulls and too much tedium get in the way of what could have been a solid experience.

Sword And Fairy: Together Forever