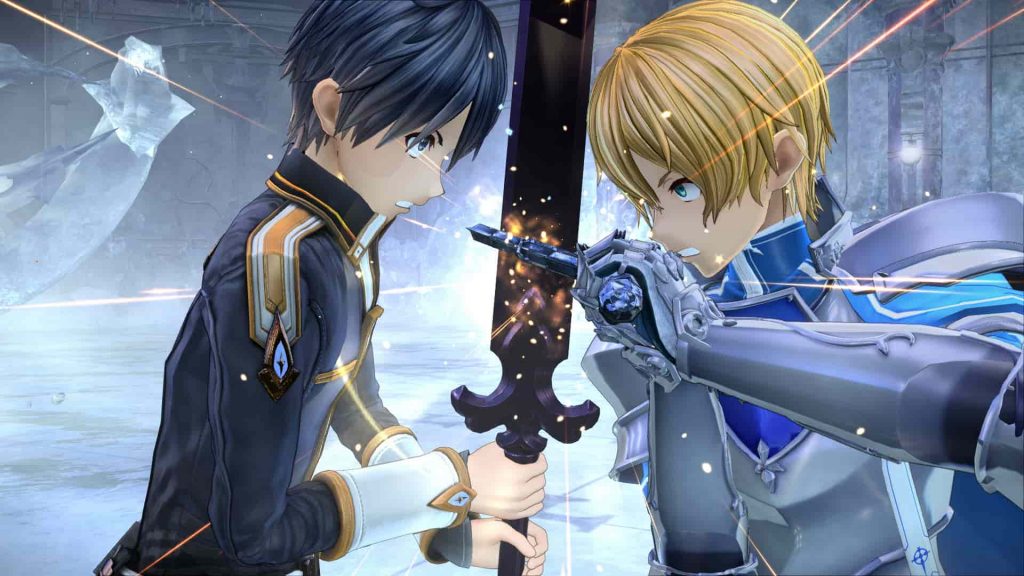 Alicization Lycoris takes place during the anime’s third season abandoning the second season Gun Gale Online and returning to the fantasy MMO setting. Kirito awakens in a brand new world and isn’t able to log out. He knows he’s in a virtual space and sets off to find out what’s keeping him trapped in this virtual world.

What makes the Alicization Lycoris story different then past titles is that it actually follows the anime story, at least for the first few chapters. This is a change, as past titles in the franchise just told their own stories in the already established worlds.

Although the Alicization story arc is actually pretty good you won’t spend to much time experiencing it as the game jumps six months into the story’s future. Sadly only the most hardcore and faithful fans will stick around long enough to actually enjoy the story as the game is actually quite long and can last you up to 70 hours to finish.

Boring and Slow Combat Is A Sooze Fest

Sword Art Online has always had a problem establishing what kind of game it wants to be. The franchise has gone through various battle systems and all of them have had serious issues. Alicization Lycoris looked to resolve those issues. As an action-RPG, it looked like the perfect fit for the franchise. After spending a serious amount of time with the title, I can say that it’s easily one of the worst and cumbersome combat systems to date.

What makes combat so disappointing is how slow it is. For an action-RPG, combat should be fast and fun. Here I sometimes have to wait longer to recover from an attack than it takes to perform said attack. Characters just linger there in an action pose after every special attack. I would have loved to avoid using some of these attacks but your regular attacks do virtually no damage.

To put it into perspective I can defeat foes in about one or two special attacks. If I didn’t use these special attacks it would probably take me over 50 normal strikes to defeat an enemy, begging the question: ‘What is the point of having a regular combo attack?

The combat is so slow at times that the game actually has passive skills you can unlock to make it faster. Skills that increase your attack speed, recovery speed, and many many more. I’ve never played a game where I had to use valuable skill points to make the game run better.

Build Your Character To Your Desire

There are a lot of skills in the game. Besides the various weapons and different skills you can unlock for each weapon class, you’ll also have access to passive skills and timed skills.

Passive skills you can equip to increase your defense and attack stats while timed skills will increase your speed, accuracy, or critical hit chance for a short amount of time.

This allows you to build the character you truly want. Make a purely defensive tank or a character that uses buffs and debuffs to gain the advantage in combat. I liked having the freedom to build the character I want but I simply found that most fights take so long to get through, simply out damaging your foes was the best course of action.

It also helps that as long as one of your party members survives combat long enough the others will revive after about 30 seconds. You can also run from a battle, regain your health and return to battle and the foes will have the same amount of health as they did when you ran away, giving you a big advantage.

Quest Design is Trapped In The Past

The virtual world dubbed “Underworld” is pretty big. There are a lot of locations to visit and explore and some hidden treasure chests to find. The game isn’t a fully open-world but features open zones to explore. Exploring will net you various ingredients you can use for cooking and crafting but more importantly, they feature numerous side quests.

One major fault is the inability to track quests. I was told in a tutorial that by going to the game map and pressing the X button I would be able to track the quest on the map.

Every quest I acquired and tried to track the game would tell me that the quest was not trackable leaving me wandering the map until I found what I needed with the limited knowledge I had. The weird thing is, if I came close to the location I needed to be the map would all of a sudden start tracking the quest.

Technical issues are the game’s, true devil. You name a technical problem Alicization Lycoris has it. Clipping issues, terrible framerate drops, pop-in issues, unresponsive controls, and a game-breaking bug. Most of these are self-explanatory but let me tell you about the game-breaking bug.

While exploring or in combat, you can switch party members. For whatever reason, you can only switch between two characters. If while in combat Kirito dies, you automatically switch to one of your other party members. When Kirito was eventually revived I couldn’t switch back to Kirito. The game would cycle between the other two characters. Kirito is the main character and the only one who can accept and complete quests. Since I couldn’t switch to him, I couldn’t progress.

Turning off the system and reloading a save didn’t fix the issue. Instead, I had to go into combat and get one of the other characters killed just so the game would force switch back to Kirito. This happened more than one time and this was the only solution I could find.

The game looks competent enough and some locations are pretty nice to explore but Alicilaztion Lycoris doesn’t really stand out graphically. The sound design is decent with plenty of dubbed dialogue and a fairly standard soundtrack.

No Fun And A Technical Disaster

Sword Art Online: Alicization Lycoris is not a fun game. It’s a technical mess in almost every way. Nothing works well and the things that do work well come with a handicap that most players will not forgive. With so many games in the franchise under its belt, I would have thought Bandai Namco would have finally figured out a formula that works. Instead, they found a way to truly bury the franchise to a point where it may never see the light of day again.

A broken mess in almost every way. Sword Art Online: Alicization Lycoris doesn't deliver on it's promised product. With so many technical issues it's hard to imagine anyone with the patience to get through the game. Alicization Lycoris should have been the crowning achievement in a beloved franchise but instead, it ends up being the worst title in the Sword Art Online franchise.