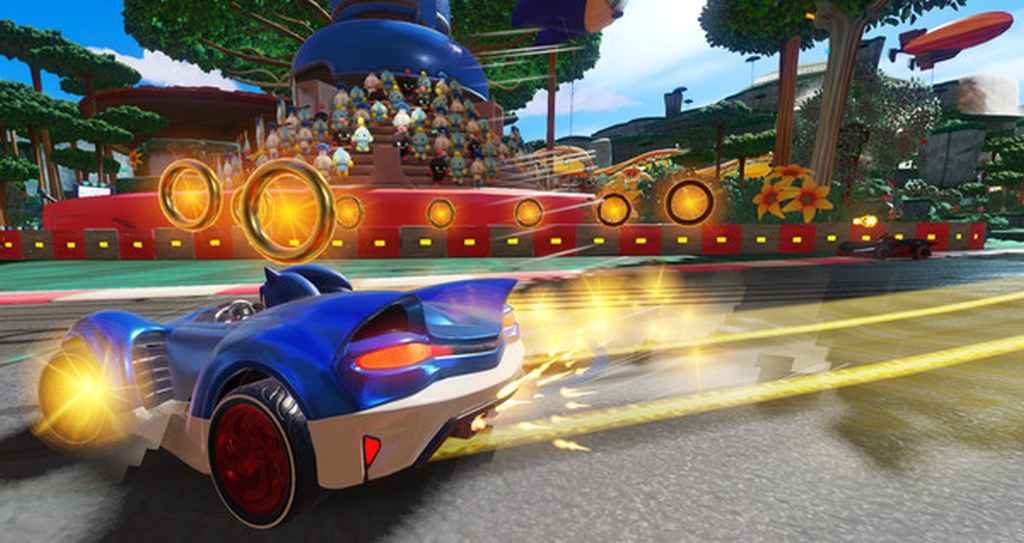 Team Sonic Racing has a story mode with dialogue and full voice overs but the narrative doesn’t really add much to the experience. In fact I ended up skipping most of the story sequences because I didn’t realize pressing the X button was skipping these story sequences and was just throwing me into the race. The story mode does have plenty of races and mini games to play through, so it’s well worth it for players to jump into.

Team Sonic Racing has plenty of content to keep you busy

Outside of your standard single races and grand prix races, Team Sonic Racing has plenty of mini games for players to tackle. I found these to be incredibly tough until I unlocked better modifications for my vehicles and even then they posed a great challenge. These mini games would have me shooting rockets at Dr. Eggman’s henchman karts to earn as many points until time run’s out. This is just one example of the mini games you’ll have to tackle, others include collecting rings and driving around pillars to earn points.

Team Sonic Racing focuses on teamwork rather then consistently winning each race. Though the game is still competitive between players it forces you to work as a team as you are ranked based on where all three members of the team place. If I placed in first and my teammates finished in 7th and 9th place while an opposing team finished second, third and forth, they would will be ahead in the standing’s as each member earned more combined points.

Teamwork is a must if you want to stay on top

The other unique feature is being able to share weapons with each other. When someone acquires a weapon they can share it with their teammates helping out those who are further behind with a simple press of a button. The item they get won’t always be the same one that you had, instead the game randomly selects one for them. Which means if they’re further behind they have a higher chance of getting one of the more powerful items.

There is one other reason that working as a team is essential in Team Sonic Racing and that’s the Ultimate Attack. As teammates work together sling shooting around each other and offering and accepting items, they build up a meter located behind their kart. Once this meter is full they’re able to launch their Ultimate Attack which makes them impervious to weapon attacks, gives them incredible speed, and perfect handling of their karts. It essentially works like the “Star” in the Mario Kart games.

It’s not a Kart racer if there aren’t crazy weapons to to use against your opponents and Team Sonic Racing isn’t any different. There are a variety of weapons that players can acquire ranging from rockets, bombs, and cubes to place all over the tracks. Most of these weapons we’ve seen in other kart racers and they mostly act the same way but in Team Sonic Racing they don’t stand out as anything especially groundbreaking.

After acquiring them enough times I was able to distinguish what each weapon was but at the start they all look like different colored wisps. The only way to really know what item you acquired was to look in the top right corner of the screen which displayed your item and its name. It’s not the most convenient way to inform players of what they’ve acquired in such a fast paced racer, that’s for sure.

The tracks themselves are a blast to race through. There are multiple worlds and each world has four tracks that you can choose from or take them on in a grand prix if you want. Each world is based off of locations you visit in the Sonic Universe and some of them are easily distinguishable such as the Green Hill Zone. Every track is filled with hidden paths and shortcuts and that go all over the place. Upside down, side ways, you name it and Team Sonic Racing probably has you doing it.

What’s great about the tracks is that they’re designed with the vehicles in mind. In Team Sonic Racing each character is assigned one of three different skill types – Speed, Technique, and Power. These different types have their individual strengths and weaknesses and each of those kart types play a pivotal role in the various tracks in the game.

Each kart type not only has different types of stats but they also come with a unique ability. Speed: This is your overall fast unite that focuses on top speed and acceleration. Technique: Allows the player to drive off track in mud and hazardous zone’s without loosing their speed. Power: Allows players to crash through barricades and walls revealing hidden paths without taking damage.

Each type is important for navigating the tracks especially when it comes to team play. Of course it wouldn’t be a modern kart racer without customization. Team Sonic Racing allows you to customize your vehicles with increases and decreases in stats. Each kart allows three different customizations on the front and back of the kart and the tires. You don’t just unlock these customization parts for winning races; instead you win credits. These credits are used to acquire car parts at random through loot boxes.

Team Sonic Racing does it’s best to distinguish itself in the kart racing genre and it does a damn good job separating itself from the competition with it’s unique team based racing. It’s fun and it will definitely have you raging out with your friends much like kart racers tend to do.

Team Sonic Racing is a blast to play. The unique team based racing puts a spin on an already successful formula that encourages players to work together while also feeling competitive enough to not keep those away who always want to prove they're the best.