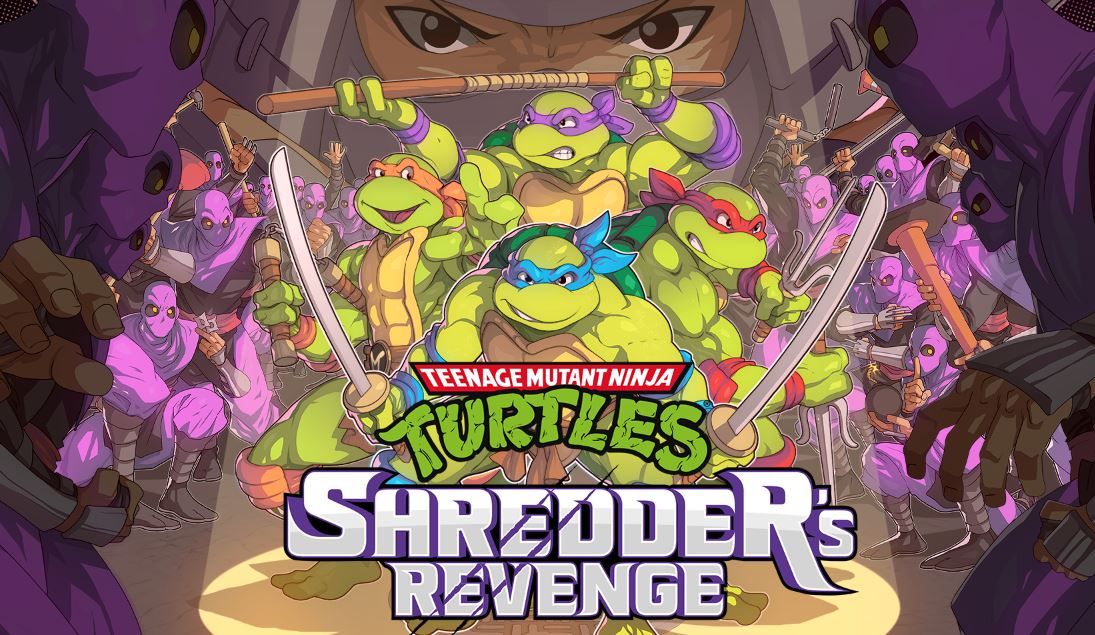 A Trip Down Memory Lane

Shredder’s Revenge sounds like a sequel, but it’s not actually a follow-up to any past Turtles title. Its art design resembles the old Turtles in Time arcade beat-’em-up from Konami, but this story has no connections. You may be asking yourself, “Is there a worthwhile story here?” The answer is no; there isn’t.

Shredder’s appearance is mainly kept for the last couple of stages. Instead, the Turtles spend the entirety of the game chasing Bebop and Rocksteady as they collect Krang’s android body parts. After completing each stage, you’re treated to an image with some voiceovers to move the story along, most of which are simply one-liners. 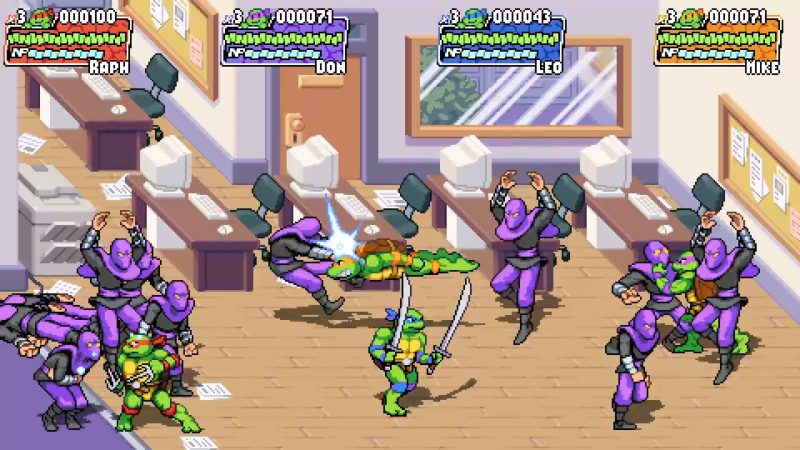 Shredder’s Revenge features only two game modes: Arcade and Story. Arcade mode is designed to replicate the feeling of playing in the arcade as you’d expect. You have a set amount of credits, and there aren’t any checkpoints or save points throughout the 16 stages. Once you’re out of lives, it’s game over. You can earn more credits by getting high scores in each level, but it’s the only way to keep going.

Story mode, on the other hand, provides many quality of life additions to help everyone enjoy Shredder’s Revenge. The first is selecting a difficulty option that is excellent for people who may not be that great at beat-’em-ups or find them too difficult.

The other additions include auto-saves between missions. This is achieved because of a cool map that you can travel across when selecting stages. It reminded me a lot of the map from Super Mario Bros. 3, moving around the map with a Turtle mobile.

Once you’ve finished the story mode, you can go back into it with any character and play through whatever mission you want. The story mode also provides other additions you’ll find in modern games; characters level up and unlock new abilities and earn extra health. 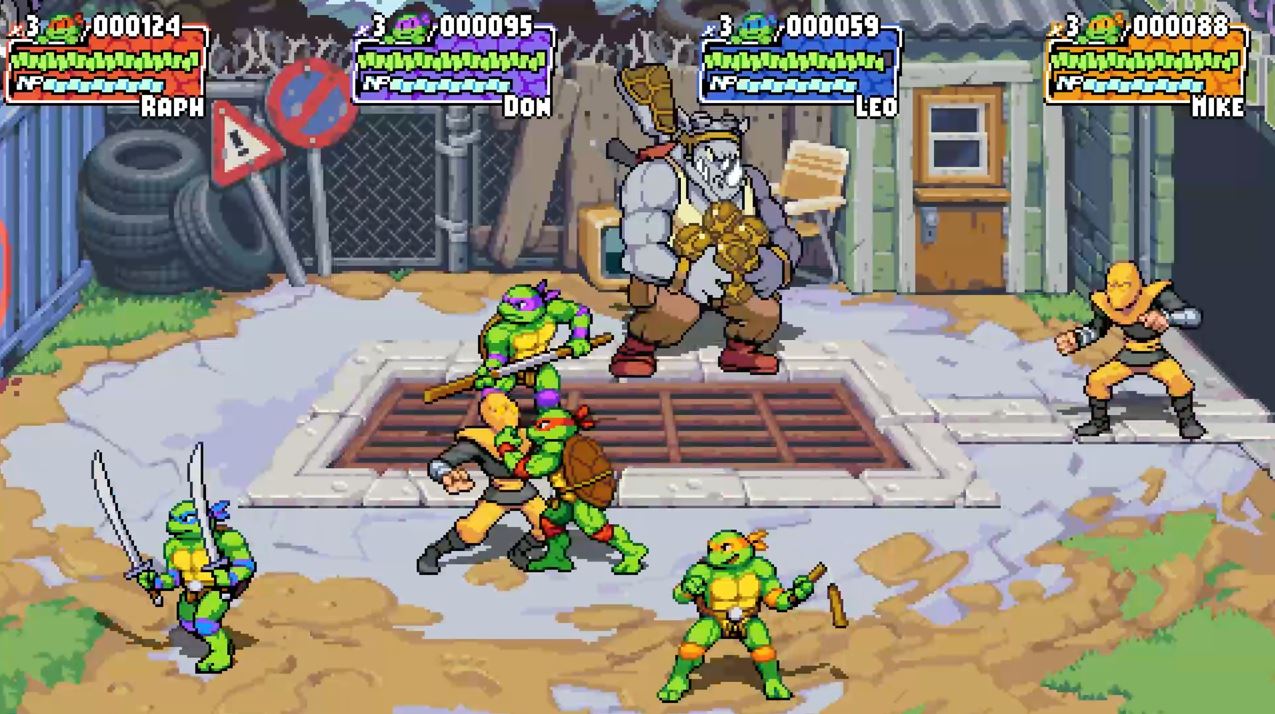 New abilities are mostly linked to super attacks; at first, you only get one super attack and one power bar that refills as you do battle. As you level up, you unlock up to three full power bars allowing you to perform three super attacks in a row. You’ll also unlock different variations, such as a jumping and dashing super attack.

My only issue with these supers is that they’re all identical in their execution. They may look different, but they do the same thing. A standing super hits all enemies around you, while a jumping one sees you dive at an enemy to do significant damage. It’s not an issue by any means, but it doesn’t make the characters unique to their individual skills.

Challenges And Secrets Add Goals To Aim For

Each level in story mode also provides secrets and challenges to complete. Challenges come in many forms. Each stage has three challenges, and some can be pretty difficult to unlock, such as completing an entire level without taking any damage. The secrets are a little nicer, especially if you know your Turtle history. A lot of the secrets feature obscure characters you can find throughout missions.

Those who remember the 80s cartoon show will recognise the Punk Frogs and even Vernen Fenwick. These surprise characters ask you to locate hidden items in missions like VHS tapes and Diary Books, which you can then turn in for extra points. Unfortunately, extra points are your only reward for completing challenges or finding secret items to help level up your characters faster.

I wish there were more to it, like alternative costumes or even concept art you can unlock and view but alas, there isn’t. What’s worse is you don’t need those extra points because you can max out a character at level 10 just by playing through the story mode on the easiest difficulty setting.

You can select from six different characters with the seventh, Casey Joans, unlocking after you finish the story. The combat itself is a treat. Much like Turtles in Time, battles can be simple, but enemies make things a challenge nonetheless.

Simply mashing the attack button won’t work on everything. Some enemies block your attacks and counterattack right as you strike them, while others throw projectiles to stun you constantly in the middle of combat.

Thankfully Shredder’s Revenge adds a dodge bottom. Something that isn’t found in many beat-’em-ups. Dodging is a life saver and got me out of plenty of sticky situations, especially against bosses. Each character has jump attacks, sprinting attacks and sliding attacks that help deal with specific enemies. 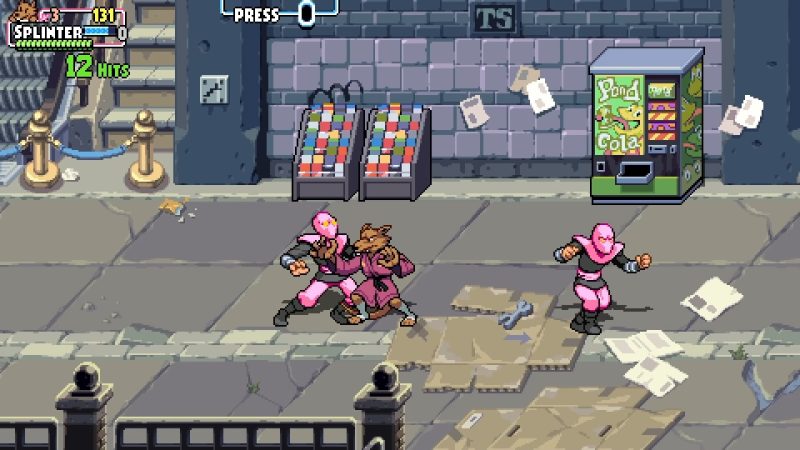 One enemy in particular will jump into the air the moment you land a strike on them and throw shurikens at you. The trick to beating them without much hassle is to quickly make a rising attack to jump into the air with them and strike them before they can throw their shuriken.

In co-op, you can even do cool tag team moves and help each other out by reviving other players and sacrificing some of your health to give to your friends through a high five animation. The tag team moves are pretty fun to pull off. My favourite is jumping up to one of your teammates and having them throw you at the enemies.

I should add that you can play with up to six people in both local and online multiplayer. The problem with this is the sheer chaos you experience, as enemies flood the screen and the action gets hectic and hard to follow. With everyone constantly jumping around and striking enemies, you’re guaranteed to lose track of your character. 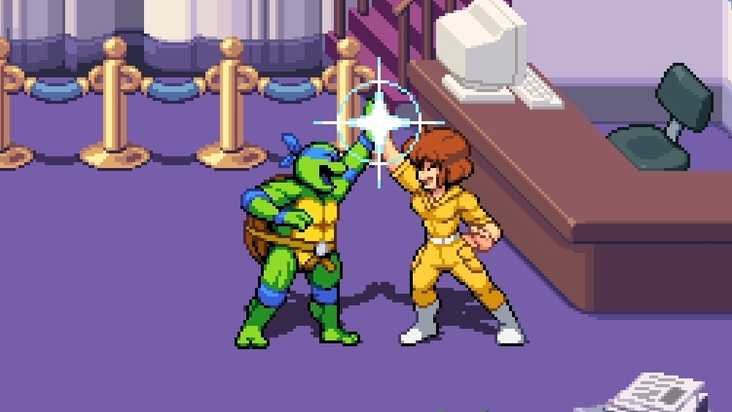 Environments have plenty of objects for you to use as weapons and many hazards to avoid. Missions have objects scattered around them like fire hydrants that you can hit to spray water at enemies sending them flying. The Foot also use various things for weapons, so you always have to be on your toes.

Making its return are the Turtle’s hoverboard missions. As they fly around on hoverboards, obstacles must be avoided while trying to take down numerous Foot Ninjas. These missions can prove to be quite difficult, but there aren’t many of them to worry about, but it’s an excellent addition for those looking for that nostalgia.

Boss Battles in Shredder’s Revenge are surprisingly some of the easiest ones. Outside of the final boss, whose attacks are so random, it’s almost impossible to avoid getting hit. Every boss has an easy-to-learn pattern and is easy to beat for a beat-’em-up. 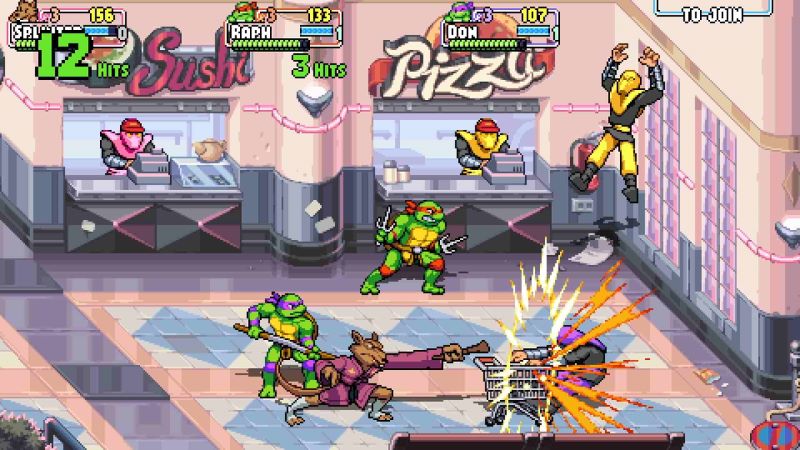 Animation-wise, Shredder’s Revenge is a treat. Each attack looks silky smooth, and the pixel animations pop. They even brought back many familiar comedic animations, last seen in Turtles in Time.

When getting run over by a vehicle, the turtles look smashed like a cartoon character, falling into a maintenance hole: Their eyes are left behind with a speech bubble appearing asking, “who turned out the lights?” My favourite, of course, are when the Mousers (small robotic dogs) grab onto your hand, and you try and shack them off by mashing all the buttons as your character flails about.

Meanwhile, the game’s soundtrack is also fairly nostalgic, especially when the 80s cartoon theme song plays. Some missions have originally created tracks by the various artist who, at times, I felt didn’t match the game’s overall score but wasn’t something that deterred me from the experience. Hearing the Wu-Tang Clan’s Ghostface Killer singing about Shredder is definitely a unique experience.

I adored my time with Shredder’s Revenge. Dotemu and Tribute games have single-handedly brought the beat-’em-up genre back into the spotlight.

Shredder’s Revenge is everything I was hoping it would be and then some. My only issue is the lack of content with any two game modes and almost no unlockable content like concept art or making-of featurettes.

Tribute Games and Dotemu have officially brought back the beat-'em-up genre into the spotlight. Shredder's Revenge channels the greatness of arcade beat-'em-ups from the 80s and 90s to create an exceptional experience. Teaming up with friends and taking on the Shredder and his ninja Foot army will definitely put a smile on your face. With plenty of quality-of-life additions like unlockable skills and mission-to-mission quick saves, the only thing holding the title back is the lack of any unlockables and only two game modes to play through.