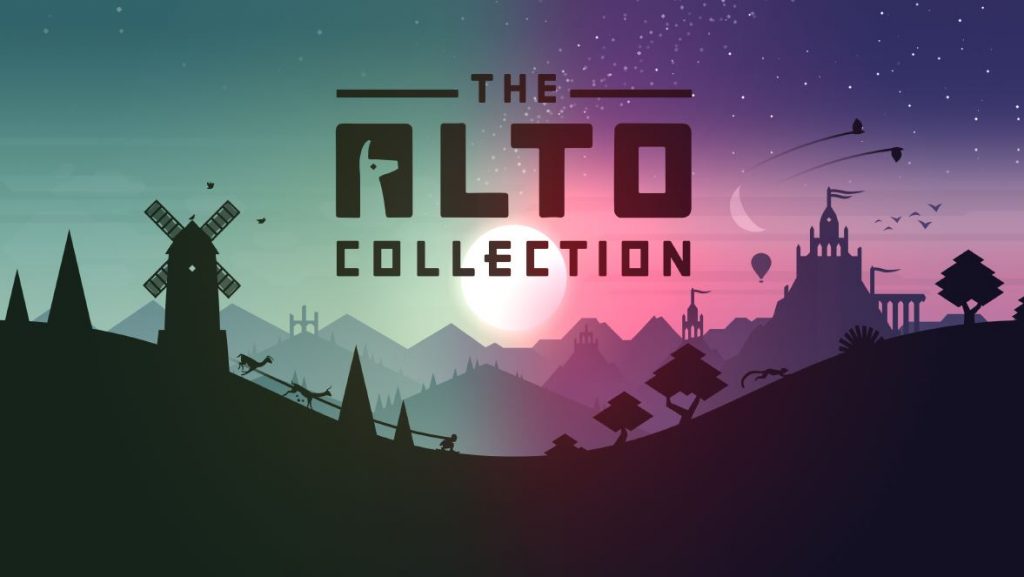 The Alto Collection PS4 Review – The Alto Collection is comprised of both Alto’s Adventure and Alto’s Odyssey. It is an endless runner, or endless snowboarder if you will. Team Alto‘s beloved mobile games that have made their move over to the PS4, but how well do these games translate to console and does it stand up on a bigger screen?

First and foremost, the Alto games are not particularly story-driven. Alto’s Adventure has you play as a mountain shepherd who is trying to rescue some llamas. Alto’s Odyssey, however, removes the escaping llamas and is instead more focused on refining its other gameplay elements.

Alto’s Adventure has you snowboarding down an endless, procedurally generated mountain, backflipping over chasms, grinding buntings, collecting llamas, and smashing through rocks. Chaining together variations of tricks will multiply your score and when you inevitably crash, you’ll start over. Pulling off those tricks will increase your momentum and build up speed which might be required to jump a chasm, or smash through a rock standing in your way.

The Alto Collection is very accessible, as both games can be entirely played with just one button. You press X to jump, and hold X to flip and that’s it. It is a rather simple gameplay hook, and that’s the beauty of it. Addictive, albeit repetitive, but so very satisfying to play. A thoroughly relaxing experience that has kept me hooked.

Respecting Your Elders And Collecting Coins

Whilst snowboarding, there will be items scattered throughout the level. A hover feather which briefly allows you to avoid rocks that will end your run, and a magnet that will pull all the coins towards your character instead of having to direct yourself into them. Coins that you collect as you play, can be spent in the games workshop. You can purchase upgrades to existing items to increase their duration, or other items such as the wingsuit which adds a new function to the gameplay, allowing you to glide.

Eventually, after you have travelled some distance without crashing, you will awaken an elder who is faster than you and they’ll attempt to catch you and bring an end to your run. What The Alto Collection calls levels, are essentially three objectives that you have to complete in order to unlock the next set of objectives which progressively increase in difficulty. After ten levels, you will unlock a new character.

Initially you begin the game as the titular character, Alto. As you progress you will unlock other characters such as Maya and Paz, who offer different attributes. Alto is an all-rounder, Paz is slow to start but can build unstoppable momentum, and Maya can pull off flips much faster than the other characters, but has trouble building speed. So far, I felt the game was most satisfying to play as Maya, as combining the tricks and picking up speed boosts feels great.

Alto’s Odyssey trades its snowboard for a sandboard, the endless mountain for the rolling sands of a desert, the hover feather for a lotus flower, and elders for lemurs. The principles of the sequel remain the same as it’s predecessor whilst fine-tuning the experience for an even more satisfying gameplay hook. Alto’s Odyssey tweaks the formulae of the first game by adding tornados to catch some air time, bouncing on hot air balloons, and most satisfyingly, wall riding.

Both games in The Alto Collection share the same aesthetic. Whilst being polar opposites in their environments, they’re equal in beauty. Alto’s Odyssey offers three biomes within the procedurally generated desert location, as opposed to just the one in Alto’s Adventure’s snowy mountainside. Both games have dynamic day/night and weather cycles which change the colour palette accordingly. For example, when the night falls over either location, the environment and characters become more of a silhouette. Sometimes a bird of paradise will fly alongside you, or perhaps you’ll see shooting stars off in the distance, adding to a sense of gracefulness.

A Welcome Change Of Pace

The art style assists greatly in making both games so relaxing to play. It successfully captures an ethereal feeling, that is reminiscent of Journey. The game offers a “Zen Mode” which allows you to appreciate the games art by removing the fail state. Not to mention, The Alto Collection has a photo mode which lets you pause and take in the game’s beauty, which is appreciated, as it does feel like an endless painting at times.

Much like the everything else in this collection, the sound design is minimalist but relaxing, be that thunderstorms, or the pitter-patter of rain. The soundtrack is just a few tracks, one for each game, that starts over every time you begin a new run which are quite upbeat, and something more chill for the zen modes, of course. Whilst this can also be repetitive, the music is delightful, and fits the accompanying art style perfectly.

The Alto Collection is beautifully simplistic in every aspect. Team Alto‘s collection is a relaxing break from those bigger titles that require so much of our time. Its transition from mobile to console only accentuates its aesthetically pleasing art style by letting us experience it on the big screen. Its repetitive nature may mean it is best experienced interstitially, but don’t let that deter you, as the Alto Collection is a very focused and enjoyable endless runner.

The Alto Collection is available now on PS4.

The Alto Collection whilst somewhat repetitive is a joy to play. It successfully captures an ethereal beauty, which makes for a relaxing and enjoyable experience. It combines being an addictive score chaser with accessibility, creating perhaps the best endless runner out there.