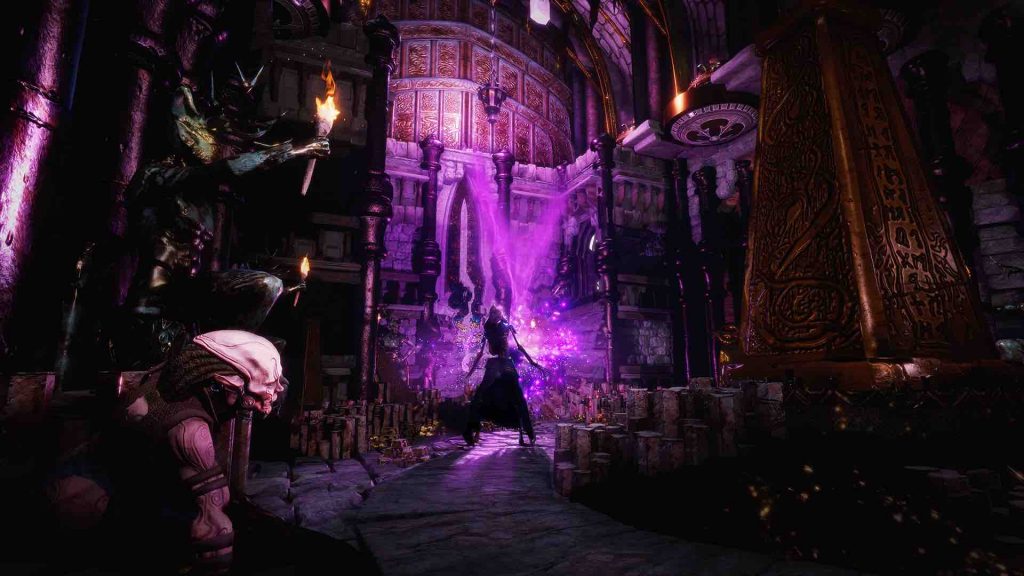 There’s a lot to be said for games, big games, like The Bard’s Tale IV that could take themselves absolutely, po-faced seriously but don’t. A massive, sprawling RPG, The Bard’s Tale IV instead feels like The Elder Scrolls by way of Neil Gaiman. There are sweary Scottish Elves, mentally unstable Dwarves and yet the stakes still feel appropriately large – adventurers everywhere are being cracked down upon by an ultra religious sect of zealots known as the Fatherites, while the city of Skara Brae begins to burn in the absence of heroes that are able to save it.

The Bard’s Tale IV then manages that rarest of feats, it’s silly and irreverent at times, but also epic and encompassing enough sweep and scope that it feels like a proper adventure, albeit one shored up by slightly janky presentation and a whole heap of turn-based combat and puzzle solving. Basically, if you’re looking for a refreshing change from the RPG status quo, then The Bard’s Tale IV is your ticket.

The ‘IV’ which finds itself suffixed to The Bard’s Tale title is not there by mere happenstance. Indeed, the developer is counting on the fact that at least some of the folks who play the game are familiar with the previous Bard’s Tale titles that were released on 16-bit systems back in the late 1980s, not least because of the manner in which this latest effort caters for old, crusty bastards like me.

A gargantuan RPG offering that is primary told from a first-person perspective, players are offered traditional free-form movement, or the ability to play the game akin to the games of old where movement is accomplished with four-way directional grid style navigation. Likewise, The Bard’s Tale IV provides ample latitude for those not especially predisposed to either puzzle solving or combat by allowing the toning down of each of those game aspects.

Once the necessary tweaks to your experience have been made, The Bard’s Tale IV allows you to either generate and tailor your own character, marrying together the sum of class and race to create a unique whole, or simply use one of the many pre-made characters that are available from the start. As one might expect all the usual classes and races are available for the choosing – Elves, Dwarves, Trow and numerous variations of Human, Warriors, Casters and more besides, each with their own racial advantages and traits, but it’s in the titular minstrels that The Bard’s Tale class system does its best work.

A jack of all trades to an extent, the Bard’s real strength lay in their ability to imbibe alcohol of all different kinds to create a wide variety of defensive and offensive buffs for members of the party, in addition to being able to replenish health of their allies, too. Brilliantly, the consumption of alcohol also provides the Bard with the ability to cast spells, reduce party wide cooldowns and much more besides. Be careful though – drink too much whereupon your drunkedness exceeds your intelligence and your Bard can get ‘smashed’, resulting in one turn’s worth of terrifying strength before being stunned for the next two. A risk and reward mechanic if there ever was.

More than just enthusiastic swiggers of liquid sin, Bards can also use musical instrumentals to play a variety of magical songs that each produce a different effect on the world at large. One song, when played next to the appropriate rune, can reveal hidden treasure, while another can smash down walls if played in close enough proximity to said obstacle.

More than just a gimmick, these songs (especially the aforementioned wall smashing one), succeed in lending The Bard’s Tale IV a dash of the Metroidvania template, as the player is greatly encouraged to return to previous areas to unearth previously undiscovered areas and loot in order to enhance and upgrade their character yet further still.

Structurally, The Bard’s Tale IV plays out pretty much like any other RPG you’ve played before. Set in the Celtic styled fantasy realm of Caith, players and their party of adventurers are free to walk around the numerous towns, cities and outlaying rural environments, chatting to NPCs, furthering the main story and of course, taking on a variety of experience and gear buffing side quests.

Likewise, though The Bard’s Tale IV has companions that you can take with your on your journey (tokens can be used to hire mercenaries from the local guide if you find yourself short a hand or two), you cannot quite interact with them to same the level that you would in say a Mass Effect or a Dragon Age, in terms of stopping and have a nice branching conversation about their backstory. Though that shouldn’t suggest that the companions in The Bard’s Tale IV are poor – far from it, they are well-written and mostly amusing characters for the most part; just don’t be expecting massive amounts of interactive exposition and you’ll be fine.

Combat In The Bard’s Tale IV Is Deep, Tactical And Satisfying

Where The Bard’s Tale IV arguably surprises the most however, is in its combat system. Admittedly, the last thing you expect to see in what seems like a Skyrim-esque affair is for the combat to segue, quite jarringly, from free roaming exploration into a gridlocked, turn-based combat system. Thankfully, the turn-based combat system that has been chosen here is more than up to the task, proving to be deep, tactical and satisfying to say the least.

Once the battle is joined players can position their party members on a friendly grid which directly faces and mirrors the enemy grid. Here, spellcasters and more rangy characters can lurk at the back, while hardier sorts can soak up the damage at the front as per every turn-based RPG battle that has ever been waged since the dawn of time.

In combat, The Bard’s Tale IV rewards players for showing creative flair. One character, a rogue type class, might drop damaging caltrops while another taunts enemies to charge over them, stunning them in the process and allowing extra damage to be dealt, while in another example, a player might miss a turn to do more damage in the next. Put simply, standing toe-to-toe with your foes in The Bard’s Tale IV just won’t get the job done.

Equally, the turn-based combat system feeds directly into the progression system too. Arguably somewhat by the numbers, The Bard’s Tale IV provides varying upgrade trees, such as attack, defense and so on for players to pile their level up points into as befitting their own playstyle, but all the same, seeing your party go from strength to strength still provides a thrill, albeit one that is somewhat tamed.

There’s No Shortage Of Charm And Amusement

Away from the tactical brutality of its turn-based scraps, The Bard’s Tale IV also prescribes a hefty dose of puzzle solving too. Mostly coming in the form of cog arrangement, symbol solving and block pushing conundrums, they initially appear easily overcome and simple to comprehend, though the difficulty soon ramps up as the game matures into its full duration (something that a quick adjustment of the puzzle difficulty slider can see addressed).

There’s no denying that The Bard’s Tale IV is a charming effort and it’s beguiling form is one which can be found in every part of the game, from the surprisingly endearing live action cutscenes that double as a loading screens and also as a recap the events of the story, to the fact that you can walk down just about any street in Skara Brae and hear the dulcet tones of bards and singers cheerfully imparting their melodies. The Bard’s Tale IV is an RPG with an effervescent personality, and it’s all the better for it.

The Director’s Cut suffix to the title of The Bard’s Tale IV is also there with good reason too. Featuring literally ‘thousands’ of fixes, improved visuals, additional dungeons and equipment and rebalancing of all aspects of the game, it’s clear that the Director’s Cut has come on a long way since its initial PC release a couple of years back, and certainly stakes a compelling claim as the definitive version of The Bard’s Tale IV.

Occasional jankyness and sometimes stuttering framerate aside, The Bard’s Tale IV is a sometimes awkward, often charming and never less than a thoroughly enjoyable RPG that with cheeky wink and a swig of Elven Wine presents itself as one of the most surprising adventures of the year.

The Bard’s Tale IV: Director’s Cut from InXile Entertainment is out now on PS4, Xbox One and PC.

The Bard's Tale IV is a sometimes awkward, often charming and never less than a thoroughly enjoyable RPG that with cheeky wink and a swig of Elven Wine presents itself as one of the most surprising adventures of the year.