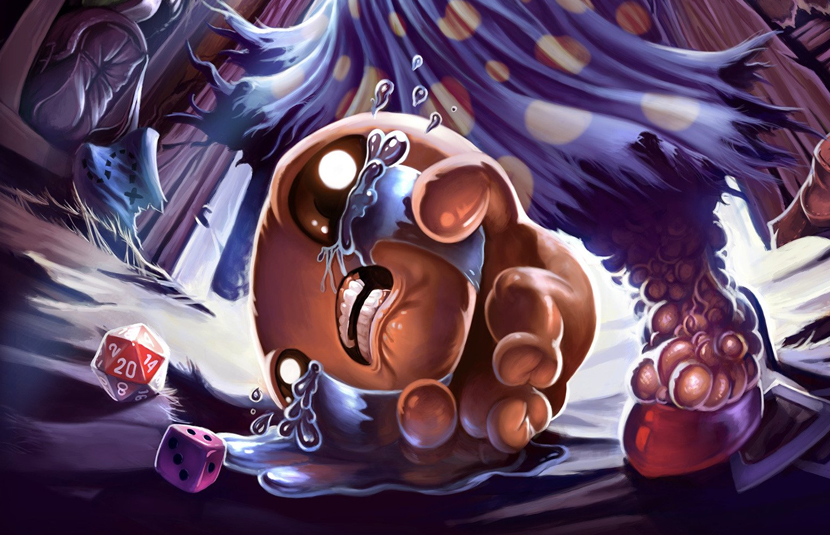 I’ve been playing The Binding of Isaac incessantly since Rebirth came to PlayStation Plus in November 2014. Firstly, The Binding of Isaac: Rebirth, then Afterbirth, and after that, Afterbirth+ on the Nintendo Switch. Repentance is the latest and probably last addition to this quirky roguelike.

The Binding of Isaac: Repentance (PS5) – Stop Crying Your Heart Out

If you have never played or even heard of Isaac before, firstly, you’re missing out on, in my opinion, the best roguelike ever made. Also, it’s a game that can be played for just about forever and still feel constantly fresh. It’s like old-school randomly-generated Zelda, with added poop, drugs and various sickening bodily fluids. It’s bloody awesome and I truly love it. Isaac is easy to play but hard to master and that’s a mix I can really get on board with. 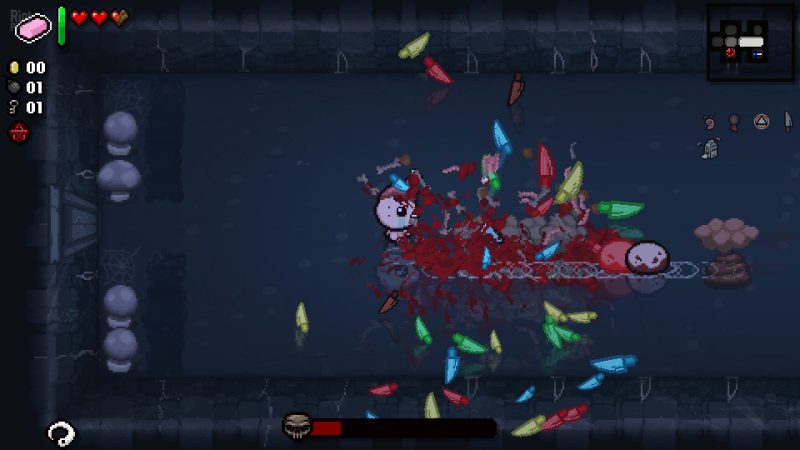 I have shown this game to so many colleagues, friends and acquaintances and the reaction is always the same. “What the hell is this?”, “Why should I be playing a game that looks so weird?” but some people, just some, get totally besotted by Isaac and its never-ending cacophony of items, power-ups and twin-stick shooting shenanigans.

Further Reading – All PS4 Games That Run Better on PS5

We have conversations on a daily basis at work about how items blend together, how we can break the game and how we scraped through runs by the skin of our teeth. Isaac has transcended being a game and has now not only become a regular talking point but an intrinsic part of our daily conversation. It’s so deep, so full of meta and it’s ridiculously brilliant.

This new DLC, Repentance, contains a re-worked co-op mode, 130+ new items, new paths with brand new chapters and numerous new enemies, bosses, characters, challenges and secrets to be found. There is so much content here, after thousands of hours put into Isaac so far, all this new stuff makes me tingly. For a game that already offers so much gameplay, this DLC gives you so much for your money with all its additions. 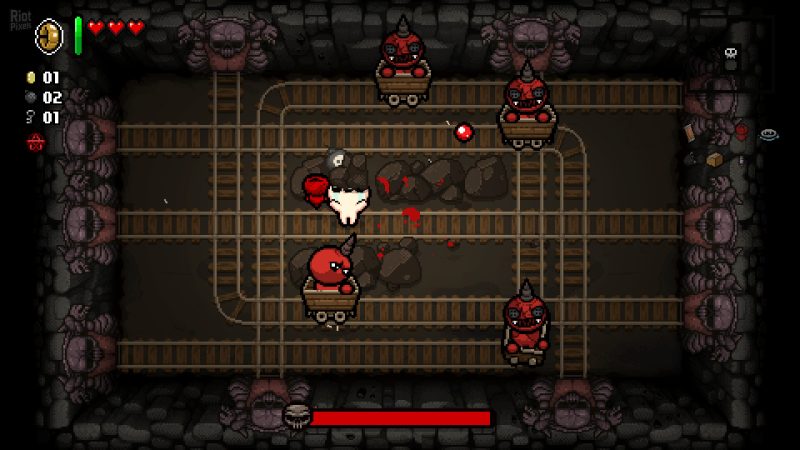 I would love to sit here and speak about how Isaac is one of my favourite games of all time but that is not what you are here for. In my opinion, the best thing about Repentance is the ‘proper’ multiplayer mode.

Previous versions have had multiplayer but it was a watered-down experience and that was not really in the spirit of the game. I played it with my boys but it was not a pleasurable event. You shared health, did not both have a full character and it just felt like a tacked-on afterthought.

Repentance brings with it a fully realized multiplayer mode, and it’s pure madness. Each player can pick their own character, each player has their own stats, items and upgrades and it’s a game within itself deciding who takes what power-up and how you each build your character.

The experience is a lot more hectic, especially when you both have a few powerful items and each screen is just full of chaos, projectiles and carnage.

The main difference is that after beating a floor and its associated boss is that you now get two items instead of one. The thing is, though, only one gets revealed at a time and it becomes a bit of a stand-off between the two players.

Do you take what power-up is revealed? Or do you wait for the possibility of something better or perhaps, much worse? It certainly adds something to the game, having a fully fleshed out local multiplayer mode. Me and my boys adore it and cannot stop playing.

Most of the other additions to the game are just more Isaac and that is by no means a bad thing. More items, bosses, rooms, floors and new campaign routes are massively welcomed. I was still seeing stuff I had not seen before this DLC was released after thousands of hours, but more variety is always appreciated. Learning new enemies, what items do and how to unlock the wealth of new goodies will last you another few hundred hours I am sure. 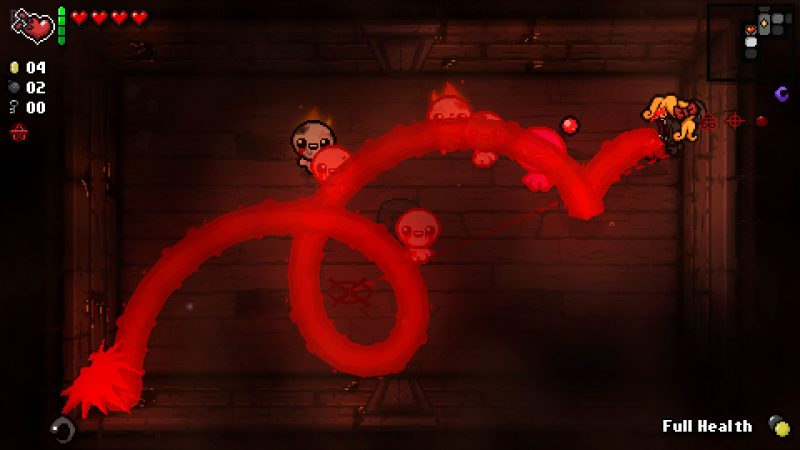 As mentioned, it’s fun talking to my colleagues at work and my boys about all the new items, bosses and enemies we are finding, how to beat them and what Issac based madness we had encountered the day before.

Every run in Isaac tells a tale. “Why have I had no keys and had to beat the game with just drops,” “I had a hundred keys but nothing to do with them” and “I had a game-breaking combination of items and broke the game!” are daily conversations at the moment and I really enjoy discovering the new stuff with friends and my boys.

I have also noticed some items have been re-worked. I would imagine a lot of ‘under the hood’ mechanics have been tweaked and I have seen various conversations on Twitter about that. Anything that makes the experience a better one is welcomed in my opinion and I have only good things to say about these additions. I also know further tweaks are in the pipeline, making the game a more balanced experience.

I do think perhaps the PS5 version is a bit pricey but it does contain every bit of Isaac released so far. Which is a lot of game to be fair. You get Rebirth, Afterbirth, Afterbith+ and Repentance which is a lot of game for your money. I have played it on both PS4 and PS5 and while I did not see too much on the PS5 to warrant the extra cash, the performance was better. I also notice a lack of Dualsense stuff, a bit more Adaptive Trigger and Haptic implementation would have been nice. 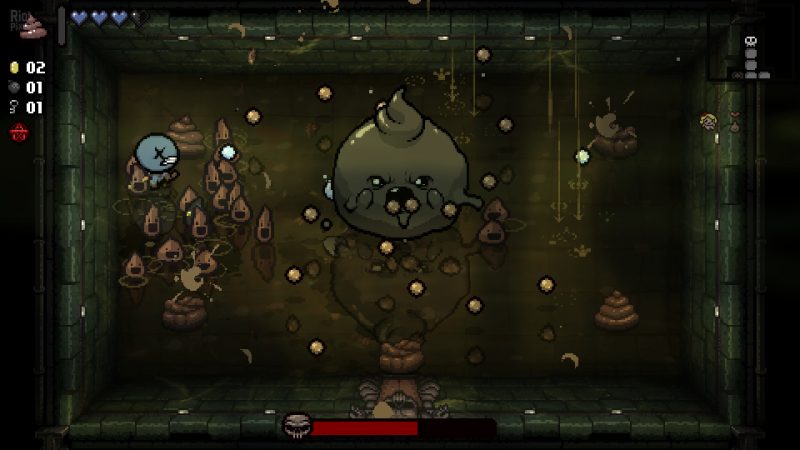 If you already have all the expansions so far then perhaps the cheaper PS4 upgrade is the way to go. If you are new to Isaac though then this package, on the PS5, will give you everything released so far with slightly better performance than on the older PS4 hardware.

On the presentation front, while not too much as changed, I have noticed some upgrades. Don’t get me wrong, if you don’t already like Isaac’s art style this update will not blow your mind. However, for a pixel-art junkie and Isaac lover like me, I welcome the small but noticeable upgrades. Blood effects, a higher resolution HUD and various effect upgrades give the game a much more up to date, improved look.

Isaac At His Tearful Best

I love Isaac, so my review was always going to be a favourable one. However, if you like Isaac, this is just more of what we love but with a better multiplayer mode. Not a lot needed fixing and it hasn’t been. We wanted more Isaac and we got more Isaac, too many changes would detract from what we all cherish. However, if this game was not your bag, Repentance will not change your mind.

As always, finding all the new items, discovering new secrets will take a long time but that is the attraction of this genre-defining roguelike. Every day has a new discovery, every day has a new death and the constant stream of surprises is beautiful.

I don’t think I will ever see everything this game has to offer and that, in itself, is glorious. I have played, beat and dissected nearly every roguelike available and I mean it when I say it, The Binding of Isaac is the pinnacle of the genre, no contest.

The Binding of Isaac: Repentance is now available on PS4 and PS5.

While not too much has changed, everything we love about Isaac has been expanded on. With a massively improved multiplayer mode, new bosses, items, paths and challenges, Isaac is at his tearful best. The PS5 version is the best console version of Isaac and contains everything ever made, and while it may be pricey, you get a hell-load of content for your money. If it sucks you in - and it probably will - you'll be treated to one of the best roguelikes ever made.