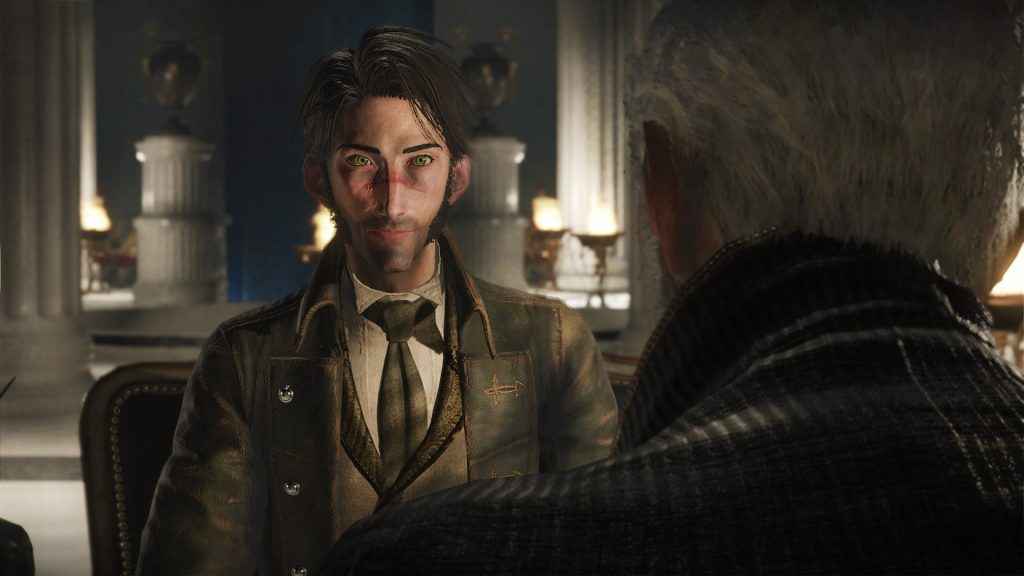 The Council Episode Two review code supplied by the publisher.

As one might expect, The Council Episode Two: Hide and Seek kicks off pretty much where the previous episode ended; main protagonist Louis De Richet is still trying to find the whereabouts of his mother Sarah De Richet, while a major complication is thrown into his search as Elizabeth Adams, daughter of John Adams, is found brutally murdered in her room of the cliffside manor that Louis and all manner of distinguished guests have been asked to stay. To say that the The Council Episode Two hits the ground running then, would be something of an understatement.

Indeed, the seeming murder of Elizabeth Adams serves as much of the focus for the start of The Council’s second episode with events taking on a distinctly whodunit theme as Louis goes from one guest to the next, questioning them for their alibis, circumstances and behaviours during the space of time that young Elizabeth met her untimely and grisly end. It’s a great bit of fun to be fair, because as you spend a great deal of time using your numerous abilities to divine the significance of clues, evidence and interview responses to work out who the killer is, The Council takes on a Sherlock Holmes style story which suits the game really well.

The problem however, is that the whole mystery just sort of ends abruptly and you’re left without any sort of real resolution to the case, though admittedly there is the chance it might be resolved in later episodes, the fact remains that it all feels too hastily brushed under the carpet from a narrative point of view to really feel properly satisfying.

As was very much the case with the first episode of The Council, it’s almost impossible to overstate just how refreshing it is to have a narrative adventure with puzzles that are actually challenging rather than being a hand-guided afterthought. From a neat statue puzzle that demands knowledge of Greek mythological tragedy, to tricky number combination conundrums that require mastery of Masonic dating conventions, The Council Episode Two treats its audience with respect and assumes a high level of intelligence, and much as its preceding instalment managed, it simply feels great to be treated as such.

Speaking of such intellectual leanings, with its in depth commentaries and monologues on art, history and geopolitics, it’s very difficult not to feel cultured while playing The Council; a fact that once again reinforces just how meaningfully different the series is when compared to its immediate peers in the narrative adventure genre. Likewise, the RPG style class system remains a highlight of The Council and as was very much the case with the first episode, the system serves to galvanise the replay value of the experience allowing players to experiment with different classes and specialisations to drive the narrative in totally different directions and thus provide substantial value as a result.

In addition to Louie himself (the voice actor now sounds much more comfortable in the role, it must be said), the other characters of The Council develop nicely in this second episode, in particular the brutal French soldier Peru shows off a whole other side to his personality that is revealed through his correspondence and by exploiting his weaknesses in conversation. Again, the ability to pinpoint and leverage the weaknesses and strengths of other characters during discourse in order to gain crucial insight into their motives remains one of The Council’s most compelling elements and does a great job in underscoring the aforementioned RPG style class based system that sits at the heart of the experience.

Where The Council Episode Two falters a tad however is when we take a look at its audiovisual presentation, which though perfectly acceptable broadly speaking, still finds itself occasionally lacking the level of polish that one might expect from a contemporary narrative adventure title on PS4. Somewhat disappointingly, the second episode of The Council not only still has the same awkward character animations and poor lip-synching that mildly blighted the previous episode, but it also reuses many of the same environments too – highlighting the obviously limited budget that the developer is clearly working with.

It’s not all bad news however; the fantastically composed orchestral soundtrack that so well backed the unfolding onscreen events of the first episode returns here in indomitable form. While the episode itself, despite not being quite as large as the five hour long first episode, is nonetheless significantly longer than episodes from other narrative adventure fare – clocking in at a good three and a half hours or so for a single playthrough.

Though not quite as fresh as the first episode, The Council’s sophomore entry nonetheless proves to be fiendishly compelling and emphasises the fact that there still isn’t another narrative adventure quite like this available right now, and given the finger-biting cliffhanger, I cannot wait to see where developer Big Bad Wolf takes this intriguing story rife with intrigue next.

If you missed them the first time round, you can catch our coverage of the previous episodes of The Council below:

The Council Episode One: The Mad Ones

Despite a small handful of flaws, The Council Episode Two: Hide and Seek places an exclamation point on one of the cleverest narrative adventure games on the market.