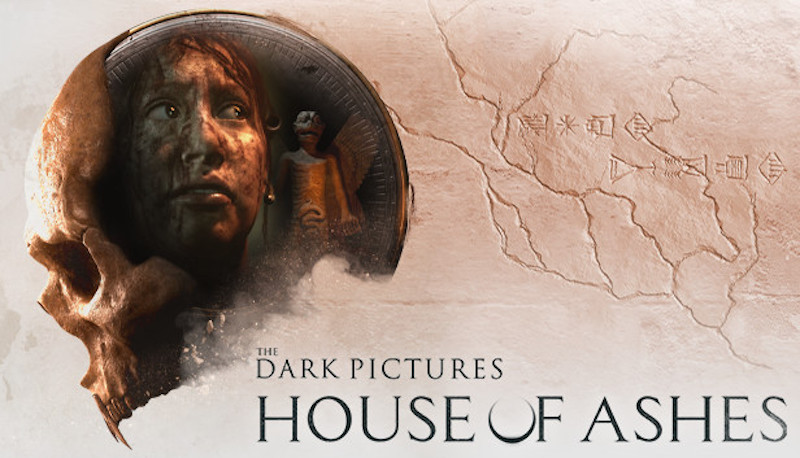 The Dark Pictures: House of Ashes PS5 Review – Supermassive Games‘ third entry in its hair-raising horror anthology, The Dark Pictures, is quite a marked departure from its predecessors.

Gone are the intrepid teenagers and spunky college students of Man of Medan and Little Hope, instead replaced by the testosterone-fuelled macho banter of US Marines set against the backdrop of the conclusion of the Iraq War in 2003.

This setting lends itself a more mature tone than previous entries, as sworn enemies find themselves having to band together to survive. Somehow, the team have managed to keep politics largely out of the equation, although the setting inherently lends itself to some nods here and there, which are thankfully handled well.

In a series like The Dark Pictures, which are essentially interactive movies, it’s also important to be able to incrementally advance the formula without straying from its roots. After all, while story is the core focus, if it’s no fun to play, the whole thing would fall flat on its arse.

A Varied Cast That Makes An Immediate Impression

With the Iraq War coming to a close, US marines are dispatched to locate Saddam Hussain’s Weapons of Mass Destruction (WMD). While intel appears reliable enough, it’s clear that some of the squad have reservations about how to approach the mission.

The aforementioned group of marines that make up House of Ashes’ principle cast are quite an eclectic bunch to say the least, although the game doesn’t shy away from leaning towards stereotypes from time to time. 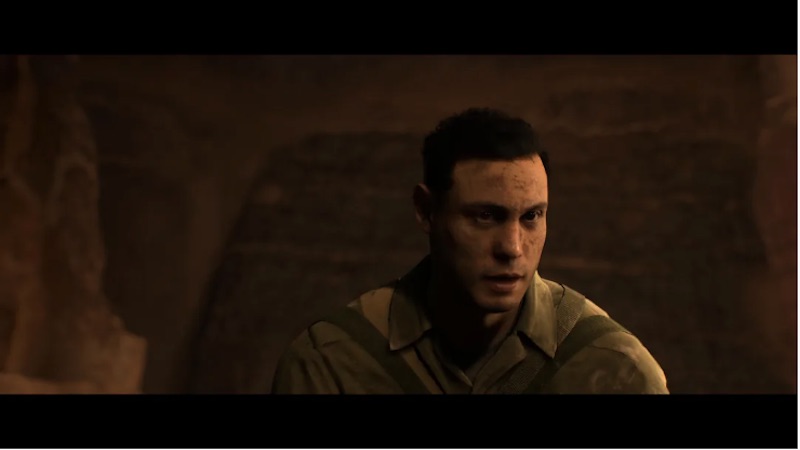 There’s enough ‘your mom’ jokes at the beginning of the game between its rambunctious Jar Heads that you could fill a book on toilet humor. That said, there’s an air of authenticity about it all, and a strike contrast in all personalities so that each character feels unique.

For example, while Joey and his pals are prone to irreverent banter – admittedly making you feel little towards their characters, at least initially – the likes of Eric, Rachel, and Jason are more cool-headed, professional types that feel instantly more likeable.

Salim, who is the main Iraqi survivor and someone who you’ll spend a lot of time with, is particularly strong. He’s the only playable non-marine in the cast, and as such I found his arc quite intriguing.

Underground, No One Can Hear You Scream

The meat of the action takes place in the remains of an underground temple, which the marines find themselves in after an earthquake results in the group being swallowed up by dirt and dust while engaged in a firefight.

Here, they find themselves stalked by an ancient, malevolent presence that has awakened – I’ll not say more than that for obvious reasons.

Mechanically, House of Ashes makes a few changes to the series. The camera, which previously adopted a classic survival horror fixed view, can now be manipulated using the analogue stick, giving you a free view of your surroundings.

It’s a small but welcome change, making it easier to navigate areas and spot collectibles, and works well combined with the new flashlight feature. 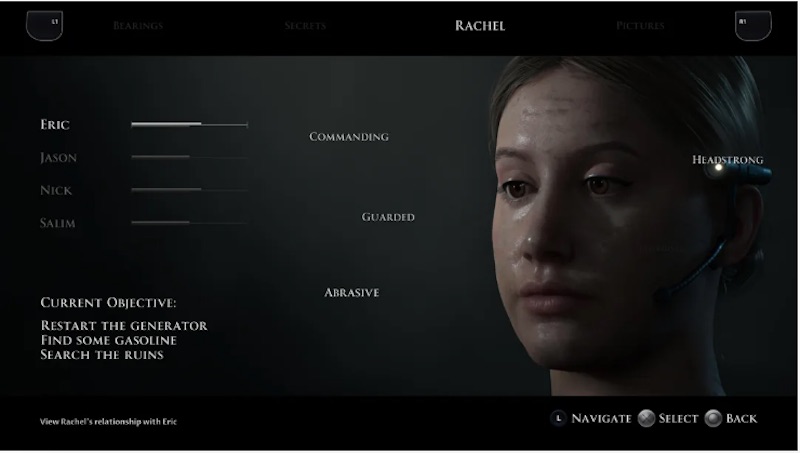 Quick-Time Events are just as plentiful as they were before, naturally, although they seem to strike a better balance between giving you enough time to react while still providing a challenge.

The heartbeat segments also make a comeback, where you are required to press X in time with ECG images to hide from foes. It’s nothing special, but breaks up the other interactive elements. As such, House of Ashes really ensures you are kept on your toes at all times; you never know when you’ll have to step in, and the tension and anticipation this creates is both palpable and welcome.

House of Ashes manages to weave a very human tale amidst its obvious supernaturally-charged trappings, which is a testament to Supermassive Games’ abilities as storytellers.

Yes, you’re being hunted by a seemingly inexorable foe, but there’s more depth to the proceedings than simply staying alive.

Whether it’s the underlying tension between US and Iraqi forces having to work together, to the surprisingly heartwarming relationship between estranged couple Eric and Rachel, House of Ashes gives you a rich tapestry for which to weave your influence.

One of House of Ashes’ biggest accomplishments is the ability to make you feel like you are making a difference. Choices rarely seem arbitrary; you’re the architect here, and whether you know it at the time or not, some decisions will come back to bite you in a major and surprising ways.

That brings me to another crucial point: I cared about the characters. I witnessed everything from gruesome deaths to relationships irrevocably strained – and it all struck a chord with me. 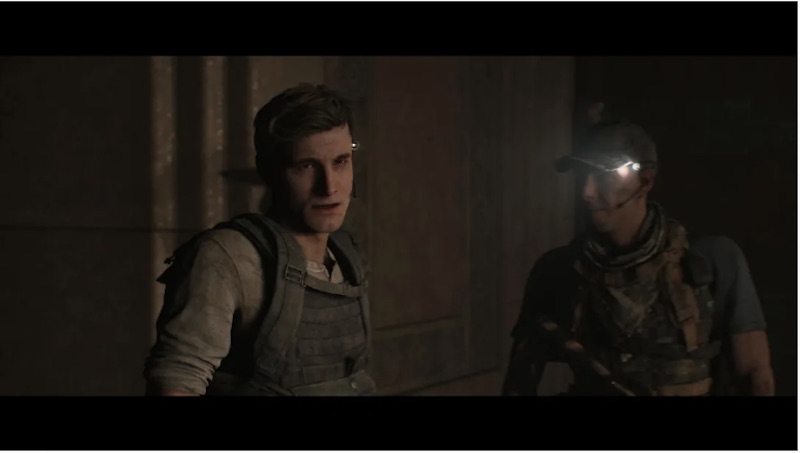 You can track your relationships and key narrative deviations in the menu, where you can essentially tell who thinks you’re a bit of an arse and who likes you. Major story choices are also tracked, allowing you to tell where you slipped up or made the right call – something to keep in mind for your next run.

Despite a few stereotypes, House of Ashes’ protagonists are not one-dimensional cardboard cutouts. No one really feels good or bad here; everyone has their own personal demons and beliefs, and I found it compelling to gradually uncover them, almost like peeling back the layers of an onion.

The nuances in the performances and animations really help to sell the stories, too – Ashley Tisdale in particular does a stellar job with Rachel.

Supermassive Games’ latest offering is stunning to look at. The character models are sumptuously rendered so that every wince of pain, smirk, and moment terror are captured in stunning detail, while the locations – from the baking heat of the combat zones to the claustrophobic temple corridors lit by faint torchlight – are oozing with atmosphere and character.

The team also does a bang-up job at pacing. There’s peaks and valleys, with explorative elements and exposition punctuated by moments of panic-inducing set pieces, usually involving multiple QTEs or crucial decision making. 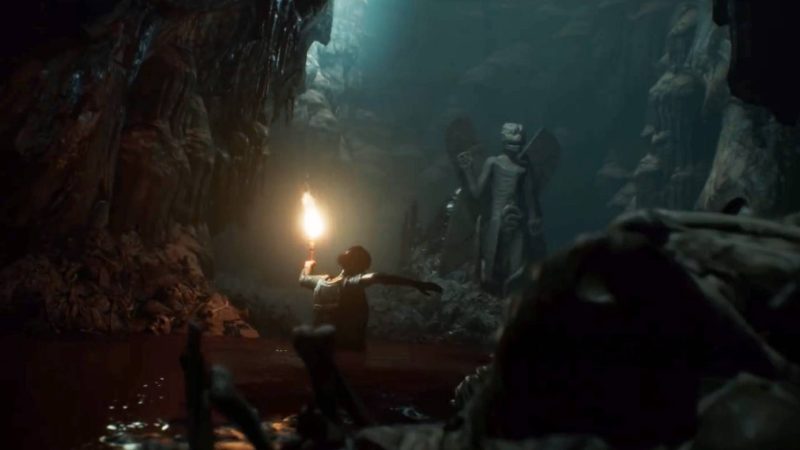 Furthermore, with five playable characters, House of Ashes finds a solid balance in juggling each protagonist. You’ll often switch characters just as something major happens to one group, leaving you chomping at the bit for more; this method of bouncing between different viewpoints keeps things fresh and ensures things don’t get too monotonous while playing as one particular character.

It’s at this stage I should probably point out the obvious: If you weren’t a fan of Man of Medan or Little Hope, then House of Ashes is not going to sway you. I wouldn’t class Supermassive Games’ output as esoteric by any stretch, but interactive horror is definitely an acquired taste.

Having said that, I felt that House of Ashes does offer more engagement from players. You feel more in control over what happens; sometimes you’re forced go on the offensive by aiming a weapon to shoot or stab your attackers, but you only have a small amount of time to react.

Like the previous Dark Pictures game, House of Ashes also gives you plenty of collectibles to hoover up, and replay value is intrinsically robust due to the very nature of unlocking multiple story paths (and deaths).

Yes, the core experience is linear, but some areas give you breathing room to explore. There’s diaries, premonition stones, artefacts, letters, and tons more to grab, helping to flesh out the backstory.

It also helps that the game’s performance is fantastic. Gone are the glitches and other technical misgivings seen in Man of Medan at launch, while the frame rate remained steady all throughout my playthroughs.

The Dark Pictures: House of Ashes is a stunning achievement that easily ranks as the best entry in the antholology to date. Its characters are believable, the performances solid, and the visuals and interactivity vastly improved over Man of Medan and Little Hope.

No, it won’t change your opinion if you disliked the previous games, but for everyone else, House of Ashes is a must-have horror fest.

The Dark Pictures: House of Ashes is the best entry in the series yet, packed with gripping storytelling, compelling characters, and solid performances. Your choices feel impactful, and seeing your relationships grow or fall apart based on your decisions carries a lot of weight. With tons of collectibles, an improved camera, and solid pacing, House of Ashes will keep you glued to the screen until the credits roll.