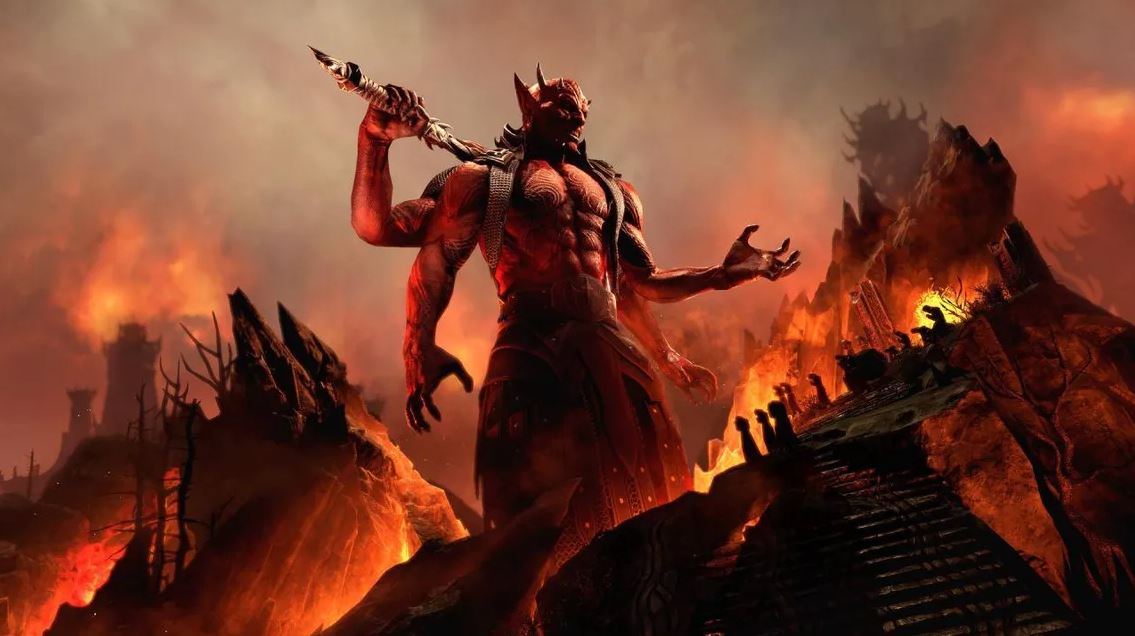 Coming in the midst of another year long tale being told within the online version of Tamriel, Blackwood follows on from the smaller Flames of Ambition chapter that kickstarted the Gates of Oblivion storyline a few months ago. That story focuses on events that occurred 800 years before those in Oblivion, and deals with the vile machinations of Deadric Prince Mehrunes Dagon and his followers.

In Blackwood, the player arrives in the titular region with a murky conspiracy to unravel that involves said Deadric Prince when a group of Longhouse Emperors make a pact with Dagon that threatens to bring the realm of Tamriel to its collective knees. So naturally, you’ll be trying to stop that. As with any significant expansion to ESO, Blackwood brings more than just a new story to Tamriel. As well as the brand new addition of Blackwood itself on the map, there’s new characters, world events, side-stories, challenges for solo and team play, and a new system.

Blackwood itself brings a variety of fresh fantasy places to explore. More than any other place in Tamriel, Blackwood is a cultural melting pot, with Cyrodill, Elsweyr, and the Black Marsh all surrounding it. As such, there’s people of all races living together in the cities of Gideon and Leyawiin, whilst beyond their walls lies mysterious wilds, long-untouched historic ruins, and the ever-encroaching threat of the Deadric realm.

While not as striking as some previous expansion’s locales, Blackwood brings a pleasing smorgasbord of new areas, each putting a slight spin on established scenery from other parts of Tamriel. It’s like a carefully constructed collage rather than someone smashing together several different Lego kits. The fact you can start a fresh adventure from Blackwood means it’s probably the best starting location for newcomers, even if they are already long-time Elder Scrolls fans. 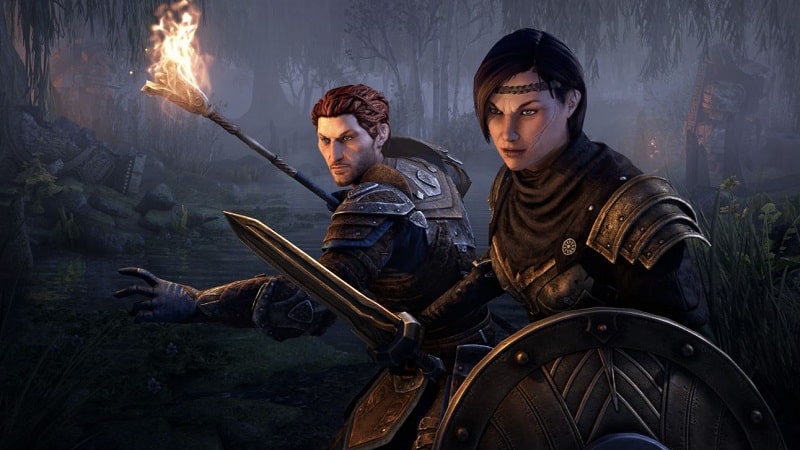 Roaming the swamps and cityscapes of Blackwood is nothing without things to see and do within it, and as I alluded to earlier, there’s plenty. For example, The Elder Scrolls IV’s Oblivion Portals return as in-game events scattered across the world, spitting out the demonic openings so you can head into the Deadlands and take the fight straight to Dagon’s realm. Other new foes lurk in the wilds, and some interesting quest-givers pop up in almost every location in Blackwood, with some genuinely fun twists and turns offered up from their quest’s stories.

The most captivating aspect of this ongoing story concerning the Daedric Prince is how it blends the warmth of nostalgia for Oblivion’s doom-laden tale and bright fantasy world with a brand new narrative and a more visually impressive Tamriel than the now 15 year old RPG could muster.

That has been ESO’s strength as it’s evolved from being ‘just another MMORPG’ to a mainstay with a healthy player base. While the weaving of the new and the nostalgic is handled more deftly in Final Fantasy XIV, the callbacks and connections between the Elder Scrolls games people loved are sufficient enough to make the MMO grind a more pleasant experience for those who care. 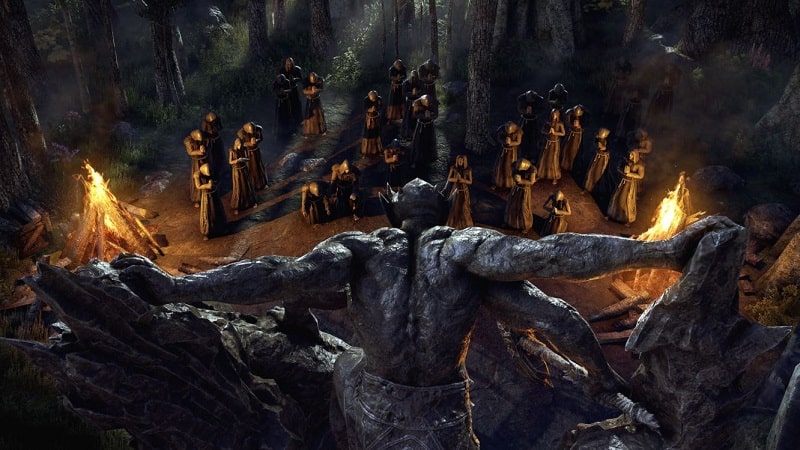 Beyond settings and stories, there’s another new piece of the solo Elder Scrolls experience that’s now been assimilated by the online equivalent. Fresh outta Blackwood is the inclusion of companions, A.I. controlled partners just like Momma Bethesda used to make. Companions can assist you as you flit about Tamriel, helping you crack some skulls and scoff some sweetrolls along the way. They have their own questlines and can level up just like you do.

As someone who generally plays ESO alone where possible, it’s nice to have a companion that (in true ESO form) melds something from the old-skool experience of Elder Scrolls with the MMO template. I’d understand if some fans of ESO are concerned about the increasingly solo-focused changes to the game robbing it of its unique selling point within the Elder Scrolls canon, but I believe it’s now an essential aspect of maintaining an MMO over time as long as you’re balancing it out with a steady stream of team-based content.

In that regard, Blackwood brings a brand new 12-player trial which feels suitably epic. It sees players team up to defend the city of Rockgrove against Daedric cultists and battle their way through to the Deadlands in the name of truth, justice, and sweet, sweet loot. It’s essentially a more elaborate iteration of the Oblivion Portal events, but that’s hardly a bad thing. 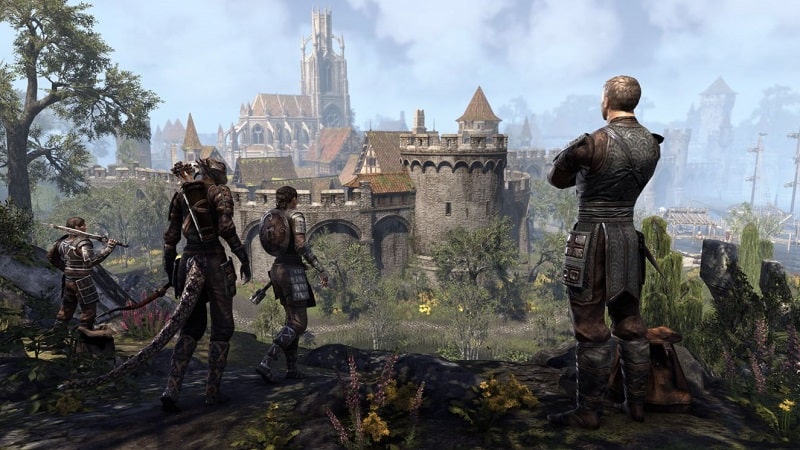 With ESO now having a PS5 upgrade, and a reshaping of the tutorial experience for newcomers, it’s once again repositioned itself into a good entry point for the curious whilst offering up fresh stories and quests via the Blackwood expansion for existing players.

Blackwood’s story, while nothing revolutionary, digs into the dark heart of Tamriel in a compelling manner with a real doom and gloom end of the world saga that will continue beyond the expansion itself. If Oblivion was something you wanted more of, this is about as close as you’ll get.

The Elder Scrolls Online: Blackwood is out now on PS4 and PS5.

Blackwood brings an intriguing new story full of conspiracy and demonic dangers to The Elder Scrolls Online, and while that’s good, it’s the addition of Oblivion Portals and A.I. Companions that really make the latest expansion a winner.