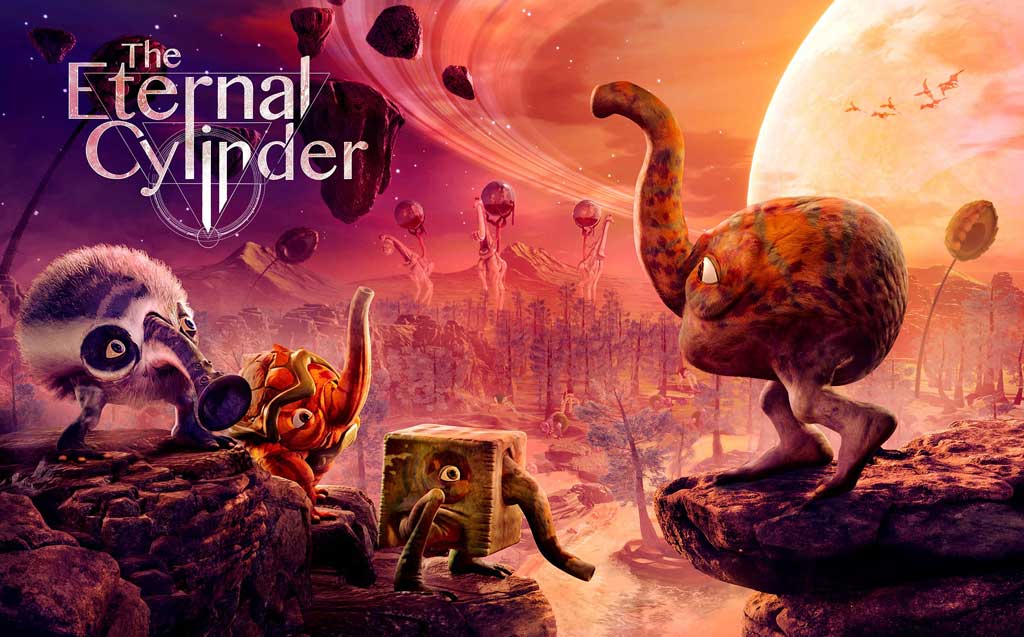 The Eternal Cylinder PS4 Review Throughout this innovative survival adventure, you control a cute posse of vacuum-trunked Trebhums who are in a constant state of threat from their harsh environment, monstrous ungainly creatures, and most of all from a huge rolling cylinder crushing everything in its path for as far as the eye can see.

The concept behind the game could be seen as an obtuse metaphor for paranoid nationalism, with the innocent but consanguineous Trebhums representing the hapless natives who are under a constant threat from a relentless horizon-wide tide of immigrants who are intent on either crushing them flat or at the very least stealing their jobs. Regardless of this prescient comment on the state of the first world today, does the game deliver a trunk full of fun or just a endless tube of tedium?

Chilean developers ACE Team have fashioned The Eternal Cylinder around a terrifying and original idea which makes for an edge of the seat experience, made all the more effective by the huge scale of the cylinder as you constantly look back over your shoulder. Respites are available by visiting towering monoliths which temporarily halt the progress of the cylinder, as do visits to ancient sanctuaries and caves which teach you and your Trebhums about why they are on this hostile world and where they are supposed to be going.

Controlling your Trebhum (think Q*bert with mods) is simple enough – a variety of walking, jumping and rolling gets you around the undulating landscape, while L2 enables you to ingest flora and small fauna, eggs and special plants or animals through your pendulous trunk. Choosing one of your inventory items with the d-pad and then pressing Circle enables you to eat, utilise any power-ups or activate a special move such as a trunk tornado or a call to ward off dangerous creatures.

Additional Trebhum team members can be hatched or released at designated plants or ovens and you can then switch between them to utilise their additional limited inventory or for a skill needed to reach an out of the way spot. Your basic Trebhum has very limited jumping and walking skills, but each has the ability to roll at a much faster pace, essential when the eponymous cylinder is released. 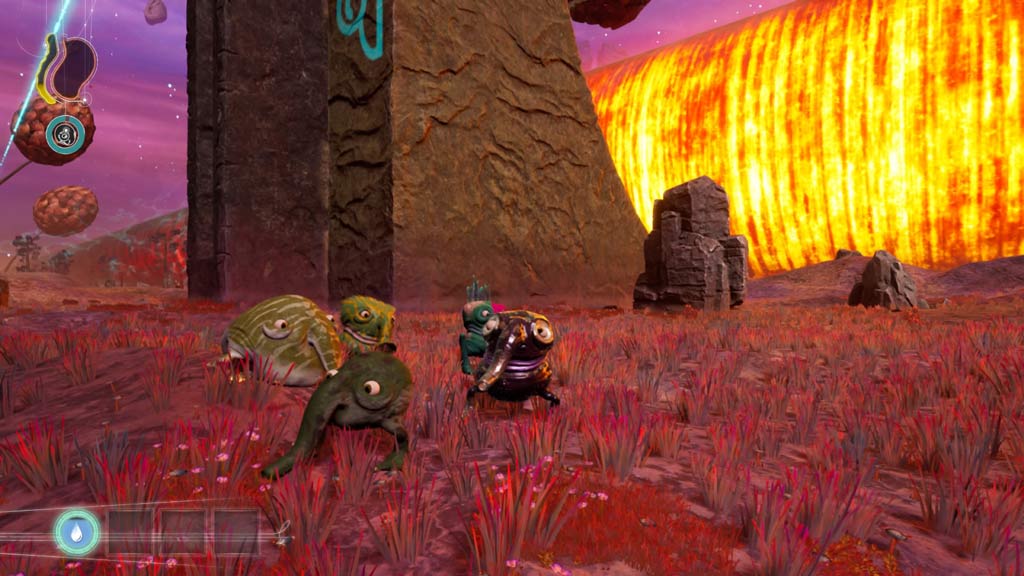 While the cylinder can be stopped by passing through the monoliths (essentially towering checkpoints regularly placed at distance across the landscape), the cylinder is set in motion again when your posse of Trebhums cross the shimmering curtains of light which separate each large horizontal area. Once this occurs, you’ll have no chance to explore the newly opened up landscape, as you’ll be rolling for your life to reach the next monolith as the cylinder crushes the previous play area to dust in your wake.

This means that you’ll only get one chance to explore each ‘band’ of landscape and once you’ve exhausted the options for exploration and switch the red curtain of light to blue by carrying out a task, you can then decide to move on and thus the cylinder rolls on. This staggered forward movement gives a real feeling of progress and as you are limited in your east-west exploration, it focuses your gameplay within the current ‘zone’.

As well as the collectable power ups found by ingesting specific animals, eggs and plants, there are also occasional Trebhum sanctums which allow you to purchase additional inventory, basic skills, health and stamina in exchange for sparkly lichen which you can hoover up from caves. Specific puzzle tasks such as opening a square shaped lock by transforming yourself into a cube are usually easily solved and the requisite power up isn’t usually too far away. 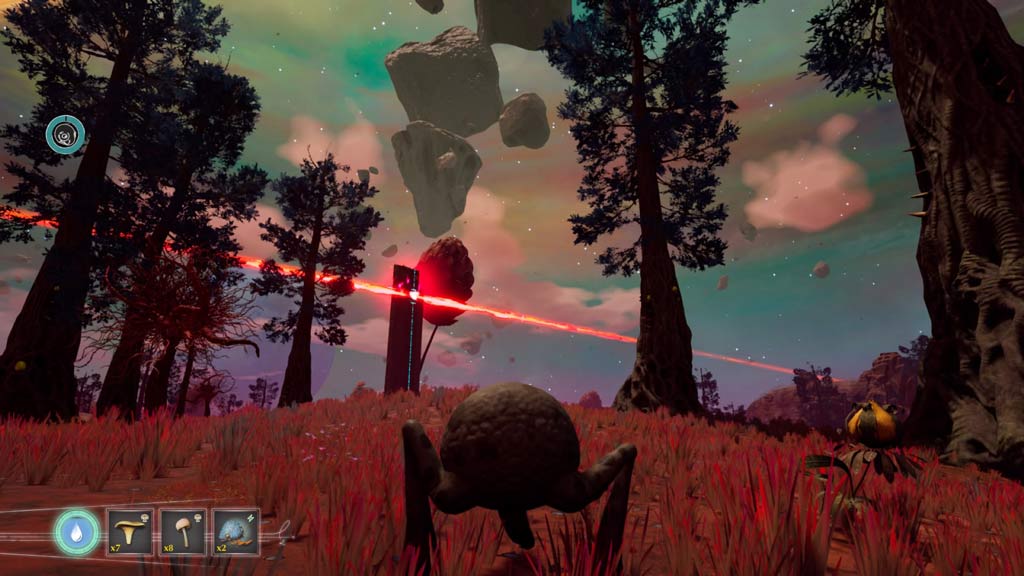 The wander of you

However, as you progress further into the game, it can become increasingly frustrating as to how to open up the next play area or to solve tasks which appear easy. You are frequently hampered either by a lack of direction from the game as to what you are supposed to be doing or simply by the struggle of controlling the two legged elephants with a camera which is often in the wrong place to achieve a simple leap or climb.

Meanwhile, your stomach meter is constantly depleting as you roll and jump around, so ingesting mushrooms, fish and birds is essential to maintain your stamina which can be a distracting and slightly time consuming chore. Fortunately this food is shared across all of your current Trebhums, with up to six available initially prior to expanding your group limits with a trip to the sanctum and an upgrade.

Ignoring the warnings to ingest food makes you and your team more susceptible to attacks from the brilliantly designed monsters roaming the landscape. The nightmarish and Dali-esque creature designs are another of The Eternal Cylinder’s highly commendable fonts of originality and each has a different attack which will need appropriate evasive measures. Initially the threat from the scant creatures is negligible, but as you progress, their attacks become more difficult to avoid and more deadly.

Often half of your team can be wiped out while you scramble to run or hide and combined with the constant need to forage food, the fight for survival becomes highly frenetic and ultimately quite frustrating. The meagre options for fighting back (shooting items from your trunk or unleashing a special power) are more often than not pointless leaving the only option of running away to avoid death.

Dead Trebhums can be revived at a sanctum later on and of course more can be added along the way and there’s always the regular autosave to return to along with manual saves which are highly recommended at key points on your journey.

The lore of your be-trunked race and the mystery of the cylinder slowly unravels as you move forward into increasingly harsher environments, and the drip feed of startling new creatures and mutations for your team are all commendable reasons for following the story through to its end. 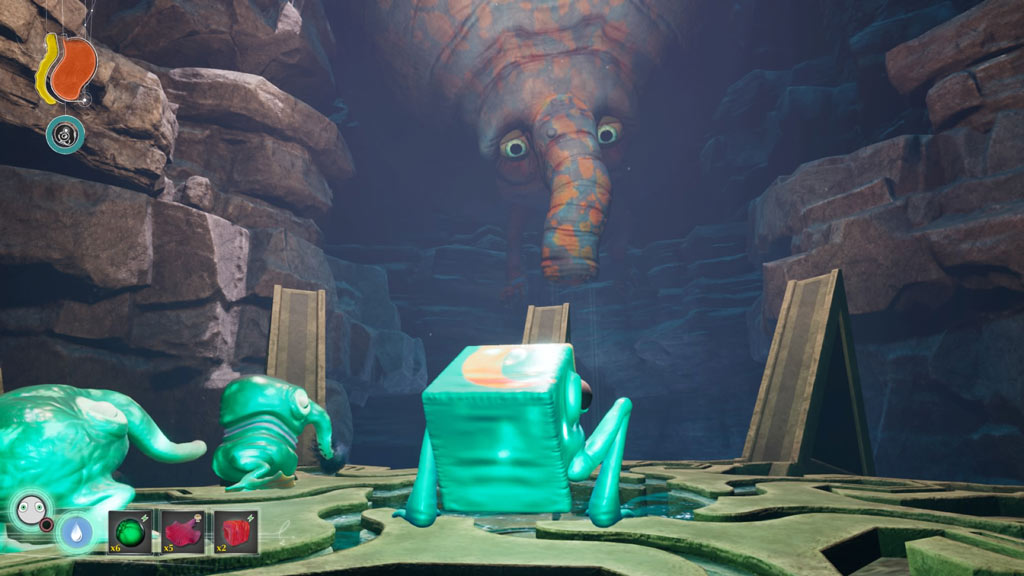 Its a shame then, that the combination of small niggles all begin to conspire to make the experience feel like a chore as the difficulty level increases. The lack of direction or clear goals along with unexplained landmarks which deny any interaction result in far too much wandering around aimlessly undermining the glorious concept and world created by Ace Team. When the excitement of playing the game dissipates as you either feel like you don’t have anything to do, or you’re missing out on discoveries as the cylinder crushes everything behind you, it’s genuinely upsetting when the potential is so great and there are so many original ideas.

There also seems like there is a little too much going on with meters, gauges, upgrades and special moves, none of which add a great deal to the progression or enjoyment of exploration. Merely an overabundance of detail when exploration and dexterity would have sufficed in servicing a fascinating and highly original story and a cast of great characters.

The visuals are splendid and beg for frequent screen saves, with tremendous lighting and a vast sense of scale enhanced by the draw distance and THAT cylinder stretching to the horizon. All the Trebhums look loveably dapper and are brilliantly animated as are the aforementioned nightmare creatures roaming the landscape which have to be seen to be believed.

So overall, I can’t recommend The Eternal Cylinder unconditionally, although I’d dearly love to. With a little less grind and fiddle, a more forgiving camera and a bit more direction to avoid aimless wandering, The Eternal Cylinder would be a truly wonderful and original world to dive into. As it stands, be prepared for a slightly stilted experience which will still impress you greatly, even if you have to muster the patience to return a bit less often than you’d really like.

The Eternal Cylinder is available now on PS4 / PS5

A unique and highly original survival adventure inhabited by a host of outlandish creatures in which you constantly struggle to guide your hapless Trebhums to safety and away from The Cylinder. While the design and concept can't be faulted, the lack of direction and excessive busywork bog down the gameplay and detract from the experience to the point of patience testing. If you can handle a fiddly challenge which rewards a great deal of patience with some outstanding originality, it's recommended.