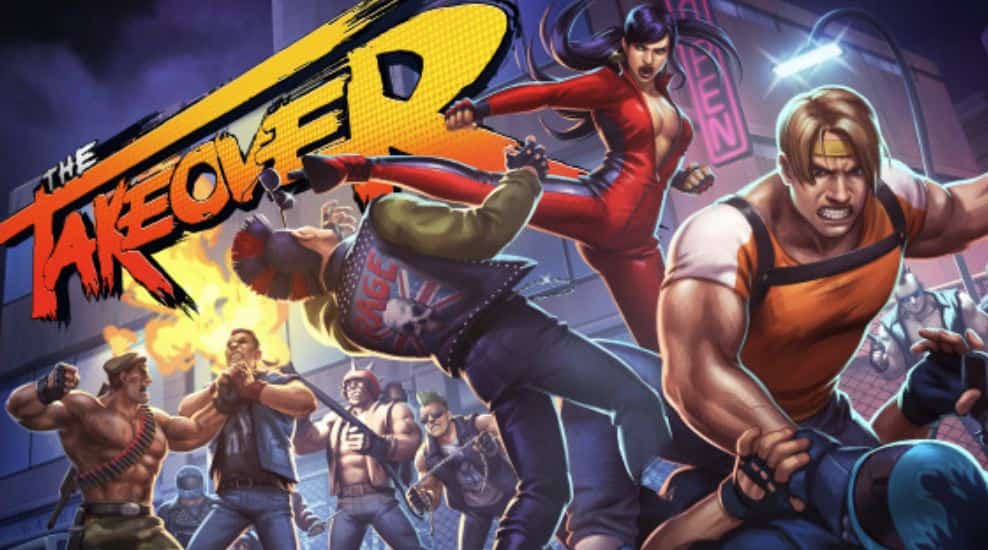 The Takeover PS4 review. Imitation is the sincerest form of flattery they say and in the case of The Takeover it would seem that the developer has taken this maxim to heart. A side-scrolling brawler that takes ample inspiration from Final Fight and Streets of Rage, though arguably Sega’s classic brawler appears to be the primary reference here, The Takeover is nothing less than an infatuated, ornately framed love letter to Sega’s face smashing series.

Quite simply, The Takeover doesn’t just want to be influenced by Streets of Rage, it wants to *be* Streets of Rage and this sort of slavish, besotted infatuation is evident in every pixel, from the first stage to the last.

Like its classical inspiration, the premise of The Takeover is simple to grasp. Our protagonists live in a shithole town and within that town a family member has been kidnapped which leads to, you guessed it, a street fighting (raging?) odyssey that takes you from one end of the city to the other (and beyond). So far, so every-urban-side-scrolling-brawler-under-the-sun, then. Though I will say that the comic book style cutscenes which link the story between stages are certainly quite well done to say the least. 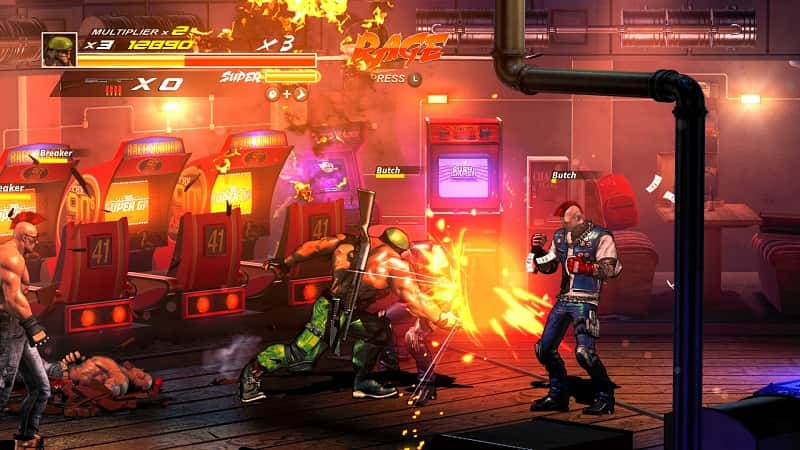 Once you’ve chosen a bruiser from the trio of different fighters that The Takeover offers (a gruff army dude, an Axel Stone lookalike and an ass-kicking lass in a tight, skin/tracksuit thing), off you go onto the streets in search of legs to break and faces to shatter.

From here, The Takeover absolutely becomes everything you expect – for both good and ill. Like every side scrolling fighting effort worth its salt, the objective is simply to proceed from left to right smashing up a small country’s worth of goons before reaching the boss at the end of each stage. Naturally, along the way you’ll pick up score items, health, weapons and more besides. Again, this is pretty much what you would get from just about any side-scrolling brawler that has been released since 1986.

Where things get a bit creepy, is in just how close The Takeover takes not so much a leaf, but the whole damn tree, out of the Streets of Rage playbook. Playing as the Axel Stone lookalike character Ethan, I was surprised to discover that some of his attacks were almost directly taken from Axel’s own arsenal of moves from Streets of Rage 2 and 3. Indeed, though stalwart players of those games will recognise Axel’s grapple head-butt attack in Ethan’s arsenal for example, the functional similarities stretch even further than that. 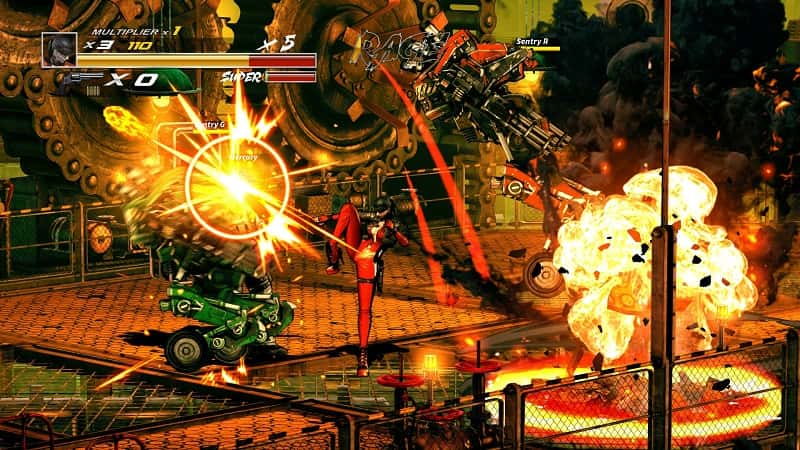 Seemingly using the much overlooked Streets of Rage 3 as a baseline, (it’s worth mentioning that when The Takeover debuted in PC Early Access back in 2016, Streets of Rage 4 was still merely a twinkle in Sega’s eye), The Takeover feels very much like that game to say the least. From the paused frames which occur when you toss one enemy into a group of their comrades, to the juggling system that allows skilled players to squeeze in a whole bunch of extra hits, it’s clear that the influence of Sega’s Streets of Rage is felt keenly throughout the gameplay bedrock of The Takeover.

Ultimately this is a good thing, not least because strikes feel crisp, throws feel hefty and grappling enemies and smashing your knees into their guts feels palpably satisfying. Though it’s certainly easy to poke fun at just how brazen The Takeover’s love for Streets of Rage is, the fact remains that underneath its obsessive veneer, a super satisfying scrolling brawler lurks that can give more than an ample account of itself. Sadly however, it’s not all roast chicken plates and score boosts.

The main drawback with The Takeover is that there just isn’t enough variety threaded throughout. Enemy types tend to repeat themselves much too often, while stages tend to lack much in the way of interactive elements and hazards that we haven’t already seen before (the dudes on bikes zooming from left to right and back again on the screen is horrendously overdone, as is the jump-over-the-flaming-barrels-trope that has also been done to death). 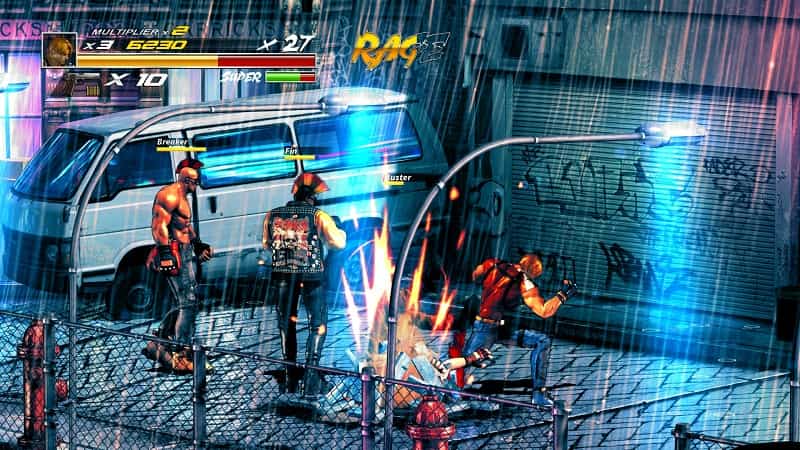 Compounding the lack of enemy variety is the fact that the goons that you’ll encounter throughout The Takeover aren’t particularly bright, and will largely wander straight into the range of your strikes rather than attempting any kind of evasion. Sadly, this lack of wherewithal also carries through to the boss scraps too, who outside of a few novelty attacks and a beefy health bar, don’t really pose too much challenge.

On that note, it’s also worth mentioning that your character also feels *ludicrously* powerful too. Whereas in Streets of Rage 4 you have to earn that feeling of superiority with getting your juggle combo timings down and working out how to best ration your special attacks, in The Takeover you not only have special moves but access to firearms from the get-go, a screen destroying super attack that charges pretty quickly and a ‘rage’ mode that makes you invulnerable for far too long while you dish out double damage to your hapless opponents.

As such and despite multiple difficulty levels, The Takeover simply feels too easy, though a strong case exists for it as a decent way to introduce new players to the delights of the side scrolling brawler genre. Elsewhere, the fact that The Takeover not only lacks a platinum trophy and online multiplayer support (co-op is limited to local play only), also disappoints. 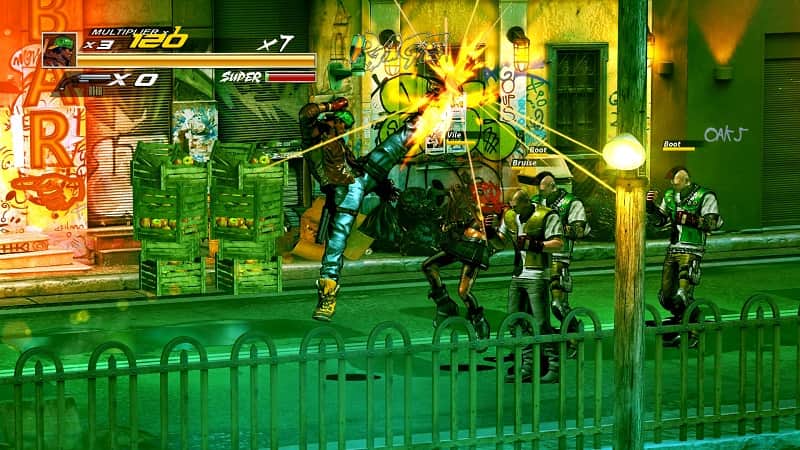 Then there are the non-fighting sections. Yep, you read that right – there are levels in The Takeover where you do no fighting at all. A retro driving section in which you open fire on enemy vehicles and jump over ramps seems super out of place, while an aircraft flying section that appears to be ripped right out of Sega’s classic 80s jet shooter Afterburner seems especially ill-judged, since quite honestly, I’d just want more stages where you’re smashing up bad dudes than doing anything else. If anything, these sections would seem to paper the cracks over what would appear to be a lack of real new ideas to push the brawler genre forward.

Visually, there’s no denying just how polished The Takeover looks. Appearing like Streets of Rage but being brought kicking and screaming into three dimensions with polygonal enemies and backgrounds, The Takeover cuts an impressive profile, with detailed character models, decent animations and retina-stroking lighting and shadow effects to boot. Also, the stages are impressively animated too. A fight in a street with parked cars will cause those cars to bounce when enemies are smashed into the ground next to them, while an elongated scrap through a packed arcade showcases a scene that is hugely busy with lighting and ambient effects.

Elsewhere, when it comes to the audio side of things it’s clear that the obsession with Streets of Rage runs yet deeper still, as famed series composer Yuzo Koshiro, among others, provides The Takeover with the sort of soundtrack beats that could easily be mistaken for those from Sega’s hallmark franchise, while the sounds of fists, feet and objects colliding with flesh and skulls all sound satisfyingly crunchy. 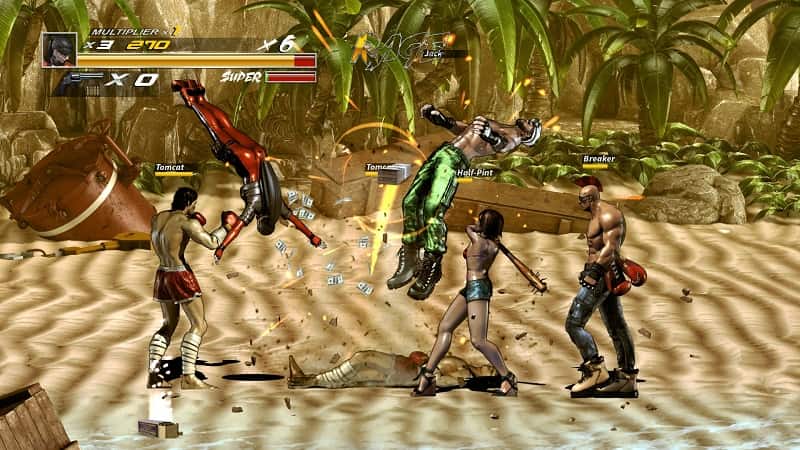 Against contemporary genre greats such as Streets of Rage 4 and River City Girls, The Takeover will invite comparisons that it cannot possibly survive thanks to how little it innovates. However, as an extremely easy on the eyes side-scrolling brawler that is perfect for a spot of single player shenanigans or co-op play, The Takeover does a grand job of filling in the gaps before the next genre defining entry makes its debut.

Though you’ll breeze through The Takeover in a single sitting, the additional challenge mode and unlockable character encourage repeat play – as does the evergreen temptation of taking to streets and putting boots in asses with a friend. Polished, easy to play and surprisingly satisfying, the Takeover might well struggle to strike out on its own and leave the shadow of its more accomplished genre peers, but it nonetheless provides a good few hours of polished, face-smashing brawling for folks looking for their next fix.

The Takeover is out now on PlayStation 4.

A gorgeously framed love letter to the Streets of Rage series, The Takeover is a surprisingly robust and attractive side-scrolling brawler that finds itself let down by poor AI, repetitive enemy types and completely unneeded non-fighting stages. Sadly, the upshot of such devoted love for Sega's series is that the developers behind The Takeover seemingly were concerned more with making the next Streets of Rage, rather than focusing on making the first Takeover.