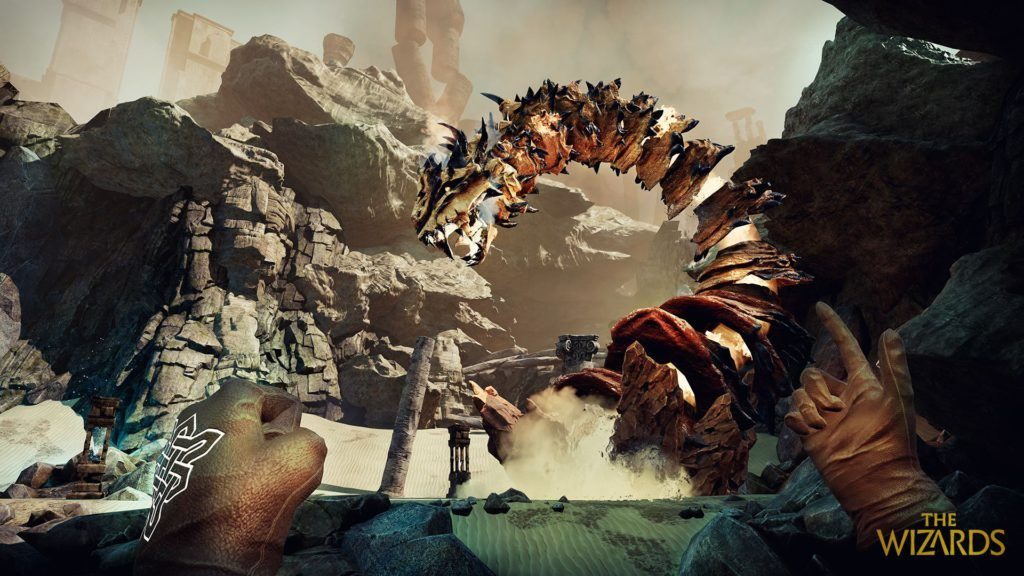 The Wizards: Enhanced Edition drops players into a fantasy world and sets them up as the only one standing between the innocents of the realm and the onslaught of invading orcs, goblins and trolls.

The Gesture-Based Magic System Is Great

As The Wizards opens, players are given access to a few basic spells. Initially, it is great fun just to fling these spells around the environment. Using the Move Controllers, players pull the trigger and move their hands in a few simple configurations to spawn the spell. Simply flipping your hand upside down will spawn a basic fireball. Bringing your off-hand forward (the game allows you to select your dominant hand – which is a great touch) will place a magical shield in your hand. Another simple motion will place an icy bow and arrow in your grip.

These spells all work great, and compared to other games in the VR space, activating them is fairly reliable. A nice aim-assist reticle appears in the distance when you have an offensive spell armed, and it lightly locks on enemies in the distance. Of course, you still have to aim and provide enough power for your fireball to reach its target. You can’t just lightly toss the thing and expect it to fly across the map to its target.

Before long, you will have unlocked the remaining spells. A powerful surge of flowing lighting (my – and probably everyone else’s – favorite), an expandable explosive ball of fiery plasma, and a ring of enemy-seeking magic missiles that fly off to do damage when you tap them. Each power is unique and interesting to use (though I did end up avoiding the plasma-thing; I could never quite get the feel for how to launch it).

Have Magic, Will Battle

There are two modes in The Wizards: Enhanced Edition – story mode and arena mode. Each of the arena modes are actually fairly unique (more on that in a bit). The story mode has the player wandering through a fairly linear fantasy world. This world is very nicely designed, and the graphics are crisp and clear. Basically, players are moved along a path towards various arena-style battlegrounds. Exits and entrances are sealed in these areas when you enter, signaling that it is time for some wave-based combat.

The combat in The Wizards is no joke. Though the first few battles are easily cheesed with some fireballs, do not be lulled into a false sense of security. Before long, you will be swarmed from all directions by enemies, and it will take more than a couple of fireballs to take them down. I found that the best bet was typically to put my back up against a wall, and then furiously fling spells at baddies as quickly as I could, only displacing when I was overwhelmed.

Motion is handled through a combination of teleportation and free-motion. One of the Move Controllers allows you to teleport about the level, whereas the other moves you steadily forward when you press the Move button.

Both methods of locomotion were smooth and intuitive, and neither caused me even the slightest discomfort. However, I did have some different troubles with the teleportation. In the heat of battle, the distance the player is able to teleport seems to arbitrarily vary. Just when it becomes necessary to zip out of danger’s way, the game kneecaps the player without explaining why, only allowing you to teleport a few feet. Weird.

Along with the battle areas, there are some nice environmental puzzles in place in story mode, and The Wizards VR is not afraid to kill players with environmental hazards. Secret items are carefully tucked away in every level, but are uncommon enough that it feels like an achievement to locate them. Every few levels there is a boss fight to overcome.

The story moves along at a rapid clip, with fun commentary by a faceless narrator/guide. Though you might occasionally be stumped briefly by a puzzle that is blocking your progress, you will at least always know where you should be heading.

Casting spells is fun, and the story mode is well designed. So what exactly kept me from fully enjoying The Wizards: Enhanced Edition? Well, a lot of stuff, in fact.

The “point-based gem system” that I referred to above works like this: Each level has a four gems that can be unlocked that can be used to enhance your spells. A few of these gems can be unlocked by finding collectibles, but the vast majority of them are unlocked by scoring specific numbers of points upon completing the level. The problem? The game gives zero indication as to how points are scored.

Do I get points for exploration? Strictly for combat? For killing guys within a specific timeframe? For dodging traps? Who knows! There must be some variables in there, because I fight the same number of bad guys every time I run through a level, but I get a different score. So what gives?

Players can find and equip certain enhancement cards before entering a level, which will affect the HP of enemies and in turn, alter the players score. For example, you can give enemies 60% more health, and this will allow your to earn double your score. But if you have no idea how the score is earned, then who cares?

Of course, not caring will lead directly to you not earning any gems for completing a level, which will in turn not allow you to enhance your spells. Which will send you into later levels woefully under-equipped to survive.

So, in a nutshell, the game is forcing players to replay levels to earn gems – based on some arbitrary point system – in order to gain better abilities. This is zero fun. The upside is that you will learn to speed-run early levels, just to get through them quicker because you are bored by the repetition.

The Arena Mode has three maps, each of which features unique gameplay mechanics. One of the maps features a simple tower defense dynamic, with the player as the only tower. Another has you running around a massive open area, defending three gemstones that periodically come under attack. The third has you navigating through an underground chamber, destroying gemstones as they spawn. Allow too many to appear, and you start taking damage.

Each of these arenas could be a great deal of fun (and might be even better with multiplayer capabilities, but I digress). But the unfortunate truth is that the game does not seem to be optimized to run well on the PS4. When too many enemies appear on the field, the animation frame-rate chugs to the point where you can see the characters blipping across the ground.

I want to be clear here. The actual VR frame rate is maintained. Moving your head around does not cause any sort of jittering, and moving across the arena does not cause nausea or discomfort. But in its stress to maintain that solid frame rate for the environment, the animations for the characters and spells go right out the window. PC VR players might encounter this from time to time due to the varying power of their rigs, but I’ve honestly never seen anything of the sort of PlayStation VR.

As a result, the Arena modes border on unplayable. To add insult to injury, the Arena mode has a completely separate spell-upgrading system. Don’t get me wrong, it’s the same point-based/gem nonsense, but any advances made in Arena mode do not carry over to Story mode. Frustrating.

It is difficult to put my finger on why exactly The Wizards did not fully work for me. This is a game that seemed primed to become an instant favorite. A fantasy-based game, with gesture-controlled magical combat. Beautiful graphics, featuring brilliant sparkling magic effects. Smart, well-designed puzzles, and a surprising level of difficulty. And yet, for all of that, I simply did not fully enjoy my time with The Wizards: Enhanced Edition.

There were too many minor irritants for me to focus on the things that I did enjoy. I constantly felt that I was fighting against the game design, the UI, and technical difficulties. I was too distracted by annoyances to settle in and enjoy the magical world that The Wizards has constructed. In the end, it was death by a thousand tiny cuts.

However, it must be noted that The Wizards: Enhanced Edition has a great deal to offer players, and is by no means a complete loss. Fans of RPG games and the fantasy genre will find some things here to enjoy, and the visuals are very well done indeed. But to me, some of the primary features of a game like this are having a sense of progression and the ability to customize my character. In those regards, The Wizards VR is a bit of a mess.

Beautiful visuals and a cool gesture-based magic system can’t save The Wizards: Enhanced Edition from an inscrutable progression system and some dire technical issues. Fantasy fans will find some enjoyment from the puzzles and the fun narrator, but some strange design decisions end up kneecapping the experience.