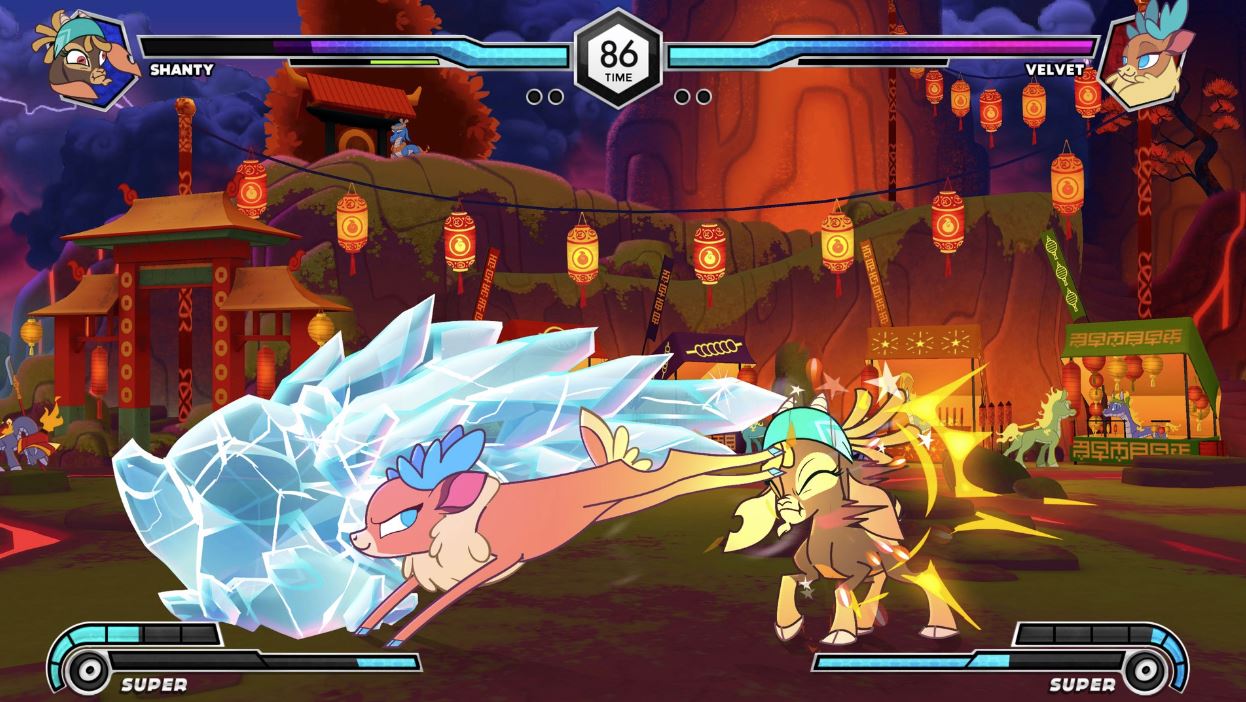 Them’s Fightin’ Herds PS5 review. I’m so happy that we all collectively live in a timeline where Them’s Fightin’ Herds exists. A two dimensional, one-on-one fighting game, you’d certainly be forgiven for taking one glance at Them’s Fightin’ Herds whimsical cartoon styled visuals infer that the underlying gameplay is overtly simplistic. Happily though, I can report that nothing could be further from the truth, as Them’s Fightin’ Herds conceals a Rollback Netcode powered, sophisticated scrapper beneath its cutesy presentation that makes a good shot at the standing shoulder to shoulder with the genre greats. Also, whomever thought of ‘Them’s Fightin’ Herds‘ as a game title deserves a raise. Just saying.

Right way the first thing that strikes you about Them’s Fightin’ Herds is the art style – there’s just nothing like it around right now with only the criminally underappreciated Skullgirls maybe coming close. Featuring character designs by Lauren Faust (My Little Pony: Friendship is Magic), the seven Ungulate fighters that you have access to are just animated beautifully, with every frame just dripping with the sort of charisma that just makes you want to spam the screenshot button like a crazy person. The only real drawback to the visual presentation in Them’s Fightin’ Herds are the backgrounds which seem sparsely detailed and rather basic, failing to survive comparisons with any recent entry in the genre as a result. It’s not a big issue certainly, but it is noticeable. 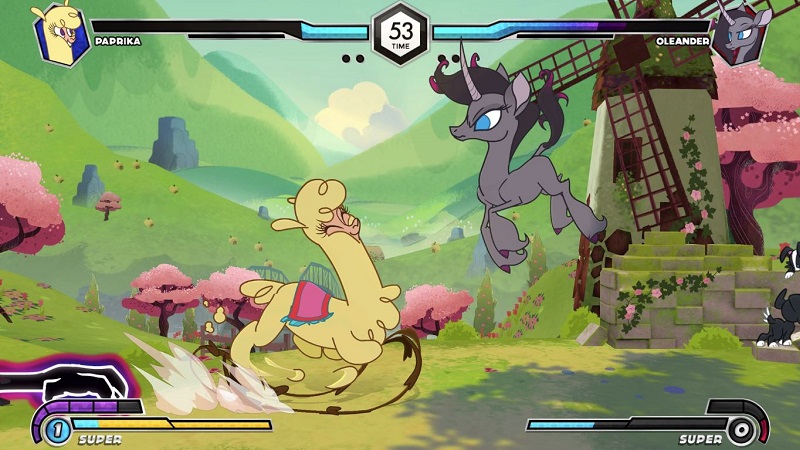 That said, the only real major flaw that Them’s Fightin’ Herds has is that there are just seven fighters in the game that you can choose from. Sure enough the incoming paid season pass brings that modest total up to eleven, but even then that is still woefully insufficient when compared to just about any other fighter on the market.

Thankfully, Them’s Fightin’ Herds also gets so much right that the topic of its diminutive roster feels less important than it probably should. Front and center of this is the core combat system which is up there with some of the genre’s best. Boasting an extraordinarily versatile combat system that is accessible to newcomers while still providing ample depth for fighting game aficionados, Them’s Fightin’ Herds has clearly been deeply thought out and the result in practice is a combat system that translates into hugely fun matches that are rife with the sort of depth and mastery that establishes it as a real contender within the fighting game genre.

First off, Them’s Fightin’ Herds embraces a blissfully straightforward four button layout where you have commands for light, medium, heavy and magic attacks. This essentially means that anyone who has put time into any recent one on one fighting game will immediately recognise what developer Mane6 has wrought here, while newcomers can pretty much leap in right away. There are other mechanics that Them’s Fightin’ Herds leverages that fighting fans will recognise too. The magic button essentially acts as the ‘EX’ action for Them’s Fightin’ Herds, allowing players to prepare highly devastating attacks and unleash them on their hapless foes once an EX bar has been charged during the fight. Elsewhere other traditional fighting mechanics such as dashes, air dashes, counters and more besides also feature. 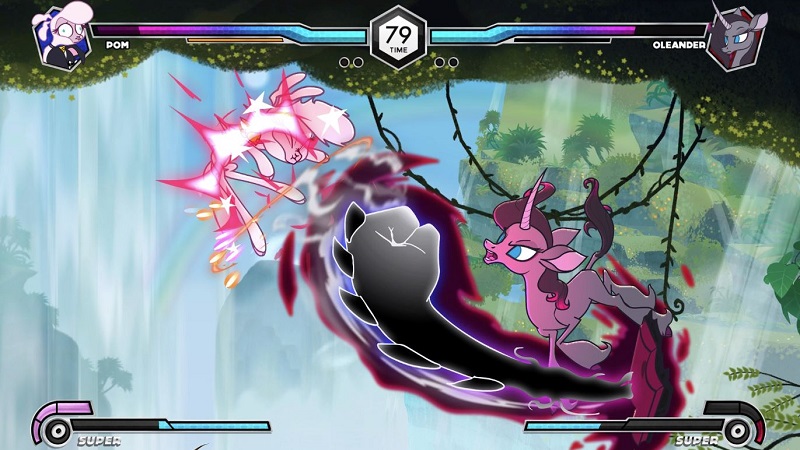 Beyond the basic robustness of Them’s Fightin’ Herds fighting system, developer Mane6 has also done a whole lot of work tightening up the nuances as well. Though Them’s Fightin’ Herds provides ample opportunities for players to juggle their enemies, a juggle decay system is in place which essentially makes it much more difficult and even impossible to juggle your opponent after a few hits, preventing the sort of infinite combo abuse that has plagued other fighting games in the process.

Another perhaps obvious difference that Them’s Fightin’ Herds brings to the table is the fighters themselves. A world away from the vertical bipeds that permeate just about every other one on one fighter since the beginning of the time, the various cows, reindeers, sheep and more that you’ll be scrapping with in the game present a very different (and more horizontally inclined) form that can make reading attacks a very different endeavour than it would be in something like Street Fighter V. This also results in a vastly flatter, though lengthier set of hitboxes too, meaning that your attacks need to be modified accordingly.

Of course any one on one fighting game essentially lives or dies by the quality of fighters on its roster and in this, though the array of fighters on offer is certainly far smaller than I would like it to be, each of the Ungulate scrappers in Them’s Fightin’ Herds feels uniquely great to play and seemingly tuned to within an inch of their digital life. From the mid-range lassoing abilities of Arizona the cow (voiced by Tara Strong, no less), to the furious short-hoof combos of Shanty, the pirate goat, each of the combatants in Them’s Fightin’ Herds isn’t just animated with their own bespoke charm and flair, but they also play completely differently too. This is how it should be – we just need *more* of it. 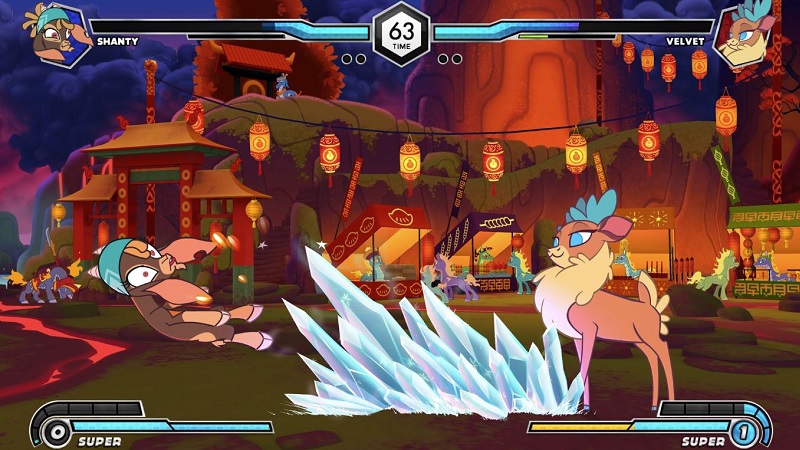 And then there’s the support for Rollback Netcode. As if Them’s Fightin’ Herds hasn’t proven its genre credentials sufficiently enough already, the implementation of the latency busting Rollback Netcode means that online matches tend to be buttery smooth and ultra-responsive affairs that underpin its sophisticated fighting engine wonderfully.

Further afield from the usual offline, arcade, practice and online game modes, Them’s Fightin’ Herds also boasts a super in-depth story mode that basically puts to shame similar efforts from other offerings in the fighting game genre. Viewed from a top-down, classic 16-bit style perspective, the story mode of Them’s Fightin’ Herds is an engagingly retro affair told through a wealth of static in-game art and text with fights, naturally, breaking up the proceedings as necessary. It’s actually a highly entertaining and well-written story too, as our hoofed fighters must seal away The Predators, an ancient evil, as they fight with each other and alliances are both made and broken with oddly dramatic aplomb. Colour me surprised with regards to how much I enjoyed this.

Don’t let the delightfully twee My Little Pony style aesthetic fool you, Them’s Fightin’ Herds is an ultra legitimate, one on one fighter with an abundance of charm and an unexpectedly compelling story mode. Though the diminutive roster is a concern, Them’s Fightin’ Herds is nonetheless a superb fighter that I fear owing to its decidedly cutesy presentation, not nearly enough folks will play.

Them’s Fightin’ Herds is out now on PS4 and PS5.

Don't let the delightfully twee My Little Pony style aesthetic fool you, Them's Fightin' Herds is an ultra legitimate, one on one fighter with an abundance of charm and an unexpectedly compelling story mode. Though the diminutive roster is a concern, Them's Fightin' Herds is nonetheless a superb fighter that I fear owing to its decidedly cutesy presentation, not nearly enough folks will play.