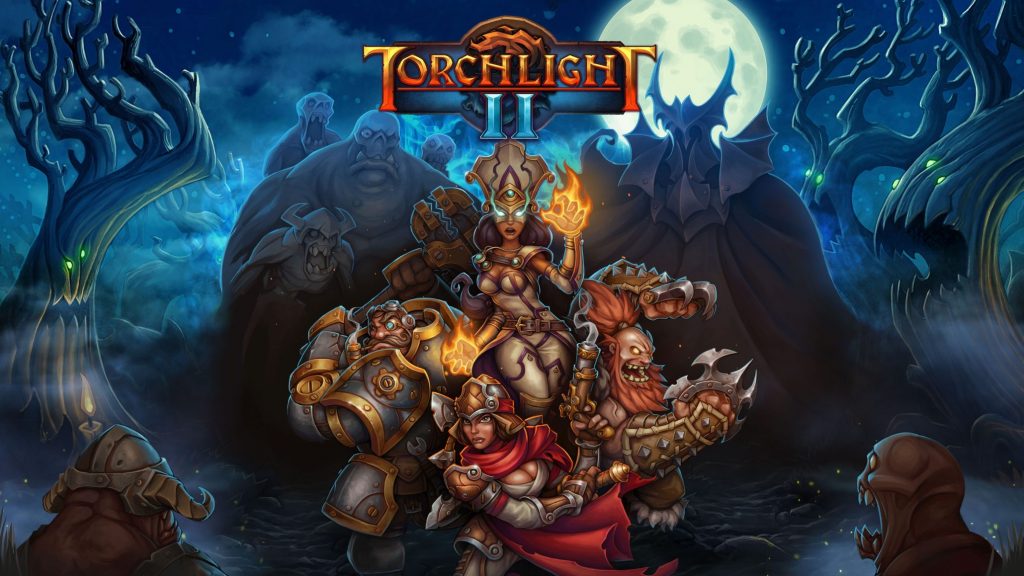 Torchlight 2’s story follows your character in hot pursuit of The Alchemist (The protagonist of the first game) as he’s become corrupted and basically not very nice. As you trail him you find out he has thrown the balance of things into chaos by corrupting the guardians of the world. It’s not a bad story, but it isn’t amazing and the presentation is somewhat dated, though the animated cutscenes are a treat to watch with some great hand-drawn animation.

Torchlight 2’s dungeon crawling and loot collecting make it so damn fun to play. Though the game was fun on a keyboard and mouse on PC, the game suits the PS4 controller so well it just feels natural. As with most dungeon crawlers you first pick a class, from your classic melee type like the Berserker to a magic-wielding Mage or a more inventive sort like the Engineer.

Each class has their own unique skills and abilities that players can upgrade and unlock between three different skill trees specific to each. These skills can be applied to different buttons on the controller and some of them will even give you passive bonuses that can make a world of difference. Passives include such skills as increasing your dodge chance by a certain percentage or increasing the range your long range weapons can hit an enemy from.

Although your skills are mapped to your class, weapons aren’t. For some classes, you don’t have to use specific weapons if you don’t want to. The Outlander, for example, is a gun-wielding class with low magic ability. If I so choose, I can equip melee weapons like swords to change up my class to play how I want to play and unlock specific skills that contribute to this style of play.

It’s not just about skills and abilities though. You can also buy or loot magic spells that allow you to pull off some cool spells like summoning zombies to your aid or even give yourself a healing spell. These spells will take up a slot on your ability menu so you must decide whether your skills or spells are more important according to the situation at hand.

Inventory Management Can be a Real Chore in Torchlight 2

Aside from your main character you also get to choose a pet. Pets vary from an awesome looking Bulldog to a dopey seeming Alpaca. Your pet is your companion throughout your adventure and each one possesses various skills of its own such as helping you fight in combat, and can also learn magic spells to aid you in your quest.

Your pet’s most important task is to handle the one big problem with Torchlight 2, inventory management. Every dungeon crawler has inventory management to deal with the massive amount of loot you find. With so much loot to collect, I was always running out of space in my inventory.

The reason this is so annoying compared to other dungeon crawlers is that everything you find counts toward your inventory maximum. Besides simple weapons and armor, fish you catch from fishing, spells you collect, and even gems you use to socket into your gear to enhance it are all counted part of your inventory.

It’s annoying because there is so much of it you won’t use most of it and save most of it for better gear. Your pet can take things in your inventory and run off to sell it at the local shop but that’s all they can do. If you want to save something instead of selling it, you must store it in a storage box back in town, by traveling all the way back there, but even these storage spaces have inventory caps too.

As a dungeon crawler, the gameplay is self-explanatory. Explore a massive region, find some dungeons, kill and loot hundreds of enemies. It’s simple, and it’s fun. The action can get frantic with dozens of enemies on screen but thanks to the super smooth 60 frames per second screen update, slowdown never rears its ugly head. I never once ran into any technical glitches or any performance issues which is great given how so many games suffer from problems at launch.

Torchlight 2 is also a great-looking game. Because of the colorful art style, it helps the game age without looking like it’s an older game. In fact, the art style even helps to set Torchlight 2 apart from the competition, allowing the developers to really optimize the game without having to worry about dated textures that might need to be improved. Don’t mistake this for a kid’s game though because Torchlight 2 is filled with blood and gore which again works surprising well for the art style it employs.

Torchlight 2 is out now on PlayStation 4

Seven years after its initial release, Torchlight 2 finally graces the console generation and proves that you don't have to have Diablo in your title to make an impact. Torchlight 2 is a near-perfect dungeon crawler that no fan of the genre can afford to miss.