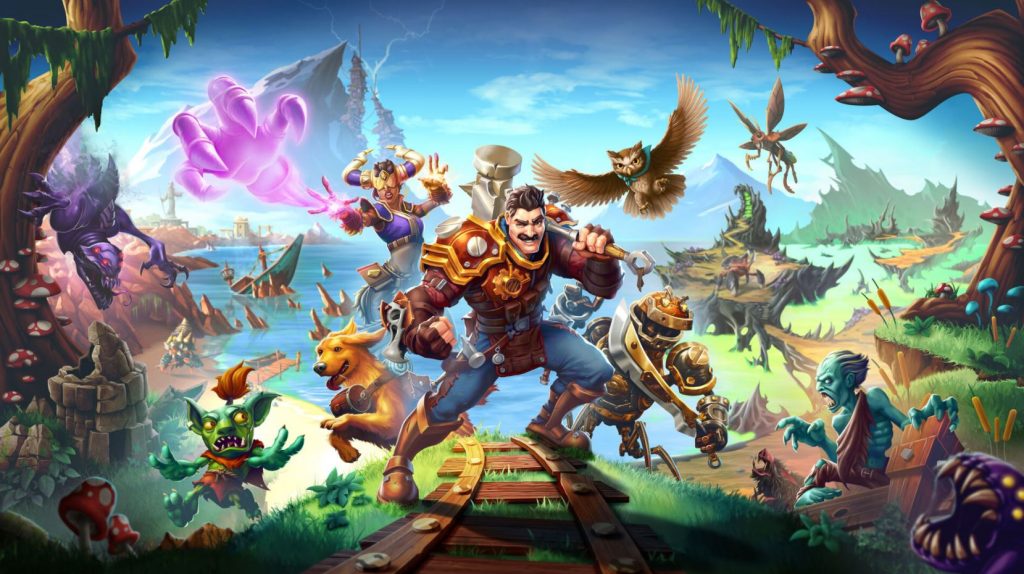 Torchlight 3 PS4 Review – I’ve had some pretty good times playing Torchlight 3. I’ve also spent a lot of time slogging through repetitive maps for hours, waiting for something interesting to happen. Torchlight 3 isn’t a bad game, per se, but spending too much time playing it makes me sleepy. A strange sense of ennui sets in, making me wonder why I spend so much of my life playing video games.

Don’t get me wrong, there are stretches of Torchlight 3 that are interesting and exciting. But the ebb and flow of progression in the game seem strangely tuned, resulting in long periods of gameplay that leave the player running on autopilot. After the initial “getting to know you” excitement wears off, the game takes far too long to get to the good stuff, with uninspiring loot drops and same-y dungeons leaving the player somewhat adrift in a tranquil sea of mindless slaughter.

The Opening Hours Of Torchlight 3 Are Pretty Good

I have played through the first couple of hours of Torchlight 3 several times. The first was just to get a feel for how the game worked. On that run, I selected the game’s weirdo Railmaster class – simply because I had never seen anything like it in a game before (the other three classes are Sharpshooter – a ranged archer type, Dusk Mage – who specializes in balancing light and dark magic, and Forged – which is a fun steampunk robot guy).

The Railmaster wields a giant hammer, and as you progress, he lays down track behind him for a train that follows him through the level blasting bad guys. As the Railmaster levels up and invests points into his two skill trees, more cars can be added to the train with additional abilities. Torchlight 3 definitely gets points for creativity. When it came time to create the classes for the game. I strongly suspect the involvement of Weed.

“And then (deep inhale)…the train follows him everywhere he goes.”

“Through the whole game?”

(Nods sagely) “Through the whole game.”

After selecting a class, the player then gets to add a relic – which essentially adds a third, elemental skill tree to explore. The options are poison, ice, fire, electricity, and (deep inhale) blood drinker. Whoa. I took a look at the Railmaster’s other skill trees, saw that they seemed somewhat fire-based, so I figured that the fire relic would be a good fit.

Launching myself into the first area, I had a pretty good time getting a handle on the controls. I spent a bit of time perusing my skill tree options and added a few fun abilities to my train. I was shocked when I picked up a rifle and found that Torchlight 3 was perfectly okay with me equipping any old weapon I wanted – I wasn’t married to the hammer, and it was fun to experiment around. I enjoyed the novelty of my little train following me around, firing grenades at the baddies.

But when I decided that I was ready to jump into multiplayer, my Railmaster couldn’t make the leap. It turns out that the two modes are completely separate – so my single-player character could not make the jump onto the multiplayer servers. Slightly bummed out, I rolled a Blood Drinking Forged to jump into multiplayer with PSU Editor Garri Bagdararov, and found that I liked the robot even better than the train guy.

Torchlight 3 Is Fun In Multiplayer – But Why The Separation?

I’m not a huge multiplayer guy, but I have to admit that Garri and I had a pretty good time running around the first few levels of Torchlight 3. The servers were going to be wiped before release, so neither of us were willing to put a huge time investment in our characters that would disappear in 24 hours, but we still enjoyed spending a couple of hours getting to know how the game handled things like loot and bosses when more than one person is running through its maps.

Loot is kept completely separate for all players. So when a boss exploded into a fountain of gold and gear, Garri would get stuff appropriate for his Dusk Mage, and I would get sweet new parts for my Forged robot. Even stuff like environmental boxes, treasure chests, or lootable pieces of scenery is kept separate between players, allowing for the cry to go out that “there’s a chest over here!”.

While we didn’t progress more than a couple of hours down the road, it was immediately apparent that the content is identical between multiplayer and single player. This left me pondering the reasons for why the single-player is kept siloed from the rest of the game. I know that this game began as an online-only MMO-style multiplayer extravaganza before morphing into its current state, which likely led to the single-player being quickly spun up. But keeping the two modes separate seems odd…like exploring parallel universes that are identical except for the fact that one is very lonely.

The game carries other vestigial remnants from its days as an early access title. The fort building mechanic, for example, was a vaguely amusing diversion that I never found much use for. I enjoyed the small pieces of functionality that allowed me to slowly build stat boosts for all of my characters, but most of the features in the fort just seemed pointless. And, why am I unable to clear all of these trees and bushes out of the way? If there is a way to do it, Torchlight 3 isn’t showing me, which is just as irritating.

Why Am I So Weak? Where Is All My Loot?

After our multiplayer experiment, I decided that I like the Forged better than my train guy, so I started over for the third time, this time with an ice-based robot. I soon discovered that I had been playing the class all wrong; the Forged class is all about building up steam by using skill attacks, then blowing the steam out in one big damage burst. If you are using your weapon for anything beyond breaking boxes, you are probably doing it wrong.

My main issue with Torchlight 3 is simply that it doesn’t quite feel tuned correctly. I started off feeling pretty strong. I soon added an ice goliath to my skills (he pops in for 60 seconds and tanks for me), and got into the rhythm of building steam up with my chest gun and then blowing it out all over the faces of neighborhood goblins. But then suddenly – and continuing for most of the first act – everything kind of stopped.

My loot drops stopped being interesting. Beyond incremental improvements, I could go an hour and not see a single piece of loot that was worth changing. My level increases slowed to a crawl. Enemies caught up with my progression, and suddenly I was fighting for every inch of progression. I popped up to Hard mode to see if that would improve my drops, but after a couple of dry hours I got frustrated and dropped back down.

I slogged through the rest of the first act, mirthlessly battling endless waves of goblins and skeletons. I autopiloted through endless spongey boss battles, dodging their attacks mindlessly and shooting at them for ten minutes straight until they died and dropped a pile of worthless crap. All of my gold went to health potions to keep me alive. Torchlight 3 was feeling decidedly unfun.

Things Pick Up, Then Slow Down, Then Pick Up Again

I play ARPGs for one thing: to mow down waves of baddies. I enjoy becoming vastly overpowered, then wrecking shop on all that stand in my path. For large chunks of the game, Torchlight III felt like it was actively foiling me in that goal.

It took me almost until the end of the first act (out of three) until I started feeling powerful again. After one of the last boss battles in the act, I was rewarded with my first legendary piece of equipment and a powerful chest gun. Five or six hours into the game, this was the first time that I saw a true bump in power level. I raged into the second act, one-shotting baddies and mowing down bosses. But then the game slowed down again. I hit another invisible line, and the loot drops turned into crap again.

Up and down, up and down, the entire game. When everything is working, I have a great time with Torchlight III, but it feels like the game has been padded in an attempt to lengthen the experience. In this case, I would rather have a shorter, tighter game than a longer one with extended spells of boredom.

It is important to note that games like Torchlight III are living games. They change over time in response to player feedback. Progression can be tuned, and loot drops can be improved. There is the core of a pretty entertaining game here – good looking and cheerful – that could be easily built into a real winner. But for now, it would be best to approach Torchlight III as the sort of game that you can play with your mind turned off. (Deep inhale).

Torchlight 3 is now available on PlayStation 4.

Torchlight 3 offers a solid foundation of ARPG goodness, but the balance of loot drops and progression feel off to the point where long sections of the game feel interminable. When everything is clicking, players can destroy waves of bad guys with the best of them – but expect an ebb and flow to the good times.