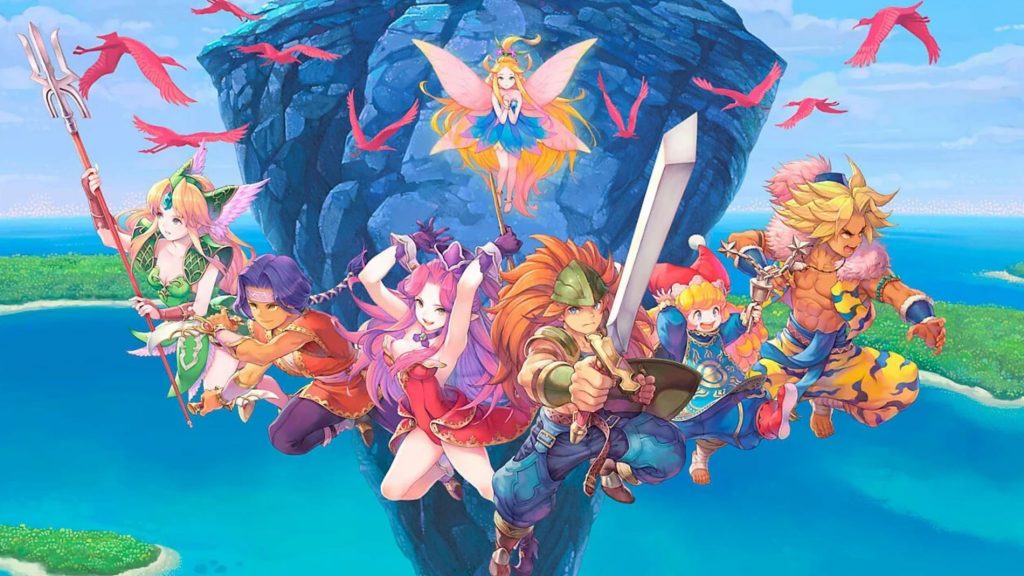 “This game looks neat, Dad,” my seven-year-old daughter commented, after watching me play Trials of Mana for a few minutes. “Do you think I could play?”

“Yeah,” I said, saving my game. “I think that you could handle this one. In fact, I think we can play together. Let me back out to the menu and figure it out.”

If you have read any of the early press for the Trials of Mana remake (unlike me), you probably know where this is going. I backed out of my game and fumbled around on the start screen for a few minutes, before finally giving up and checking Google. Sure enough, I found that the team behind Trials of Mana made an announcement early on that local multiplayer – pretty much the defining characteristic of the franchise – would be eliminated.

Sure, Square-Enix announced that they were skipping the ability to play with friends and I didn’t notice. Maybe that’s on me. But I’m not sure how much weight that announcement carries. I mean, I could announce that I was going to run around and hit everybody in my neighborhood with a hammer – that doesn’t make it right. Bad decisions are announced every day right now. Announcing them doesn’t make the repercussions vanish.

Some nonsense about “focusing on the single-player experience” was spouted as the reason to not include multiplayer (local or online), which doesn’t carry a lot of weight, seeing as how the Secret of Mana remake came out last year and included the feature. So, really, what the hell? Why on earth would you create a Mana game without the one feature that differentiates it from a thousand other entry-level RPGs?

To compensate for the lack of multiplayer, Trials of Mana does a decent enough job of allowing players to switch between characters in their team of three, and you can set some basic instructions for the AI to follow. We’re not talking Gambit-system-level instructions, just a couple of general “concentrate on healing” or “kill the same dude I’m killing” directives. It doesn’t prevent your teammates from killing themselves in later boss fights like a gaggle of idiots, but it does help a bit in battles with trash mobs.

What Is Trials Of Mana?

Trials of Mana is a remake of a Japanese SNES RPG from the early nineties, and it shows. Don’t expect a Final Fantasy VII Remake-level of production value here. This is not that. Instead of thinking of Trials of Mana as a remake, perhaps contextualizing it as an “update” might bring expectations more in line with reality.

It doesn’t seem as though any scenes or dialogue have been added or changed from the original port released earlier this year in Collection of Mana. Indeed, most townspeople and characters you encounter spout exactly one line of dialogue, just like any old school RPG. The “remake” moniker is accurate only in the sense that the visuals have changed.

This is basically a 16-bit game that has been rendered in 3D with shiny new PS3-era graphics. Trials of Mana isn’t an ugly game precisely, but anyone that is expecting a modern-looking RPG should look elsewhere. “Basic” seems to be the word of the day. And “basic” describes everything in Trials of Mana, from the gameplay to the storyline.

The Story In Trial of Mana Is Swamped By Awful Characters

The story is sketched out quickly at the beginning of the game. The Tree of Mana is withering, and it is up to our small band of heroes to gather a bunch of stuff from all over the globe and bring it back to life. They need stones. Or maybe the creatures living in the stones? Or were the creatures living in boss monsters? I honestly wasn’t paying that much attention. I was too busy wishing death on Charlotte.

Let me elaborate: Players get to choose from one of six characters to serve as their lead protagonist. This will alter the beginning of the game, as each character gets drawn into the quest in their own unique way. I chose Kevin, the beast-boy. I immediately regretted this choice, as the opening scene for Kevin involves him being tricked into murdering his only friend, a cute little wolf cub name Karl. Nice.

Kevin also speaks in broken sentences, typically without a subject. Stuff like “Go to see king! Find out next mission!” This would be okay if the dialogue didn’t have vocal accompaniment. Whoever had to read this stuff out loud must’ve been drinking pretty early to get through their recording sessions.

In addition to your lead, you can pick two support characters. And here, I really went off the rails. I chose Reisz, a nice Valkyrie princess who attacks with a trident and helps the party with buffs. I also chose Charlotte, a healer who is quite possibly the worst video game character ever created.

There is no earthly explanation for the decisions that Square-Enix made when designing Charlotte. It was almost as though they sat in a room and brainstormed ways they could make people hate videogames.

Charlotte is supposedly fifteen years old, but she looks and behaves like she is six. She talks like Elmer Fudd would speak if someone bashed him in the mouth with a brick. Every “L” and “R” is replaced in the script with a “W”. So she says shit like “My gwandpa is weawy weawy angwy with me!”. This pretty much makes me want to die. Sure, you could choose other characters, but Charlotte is the only dedicated healer available – which pretty much means you are stuck with her unless you want to burn through healing items.

I spent most of my time with Trials of Mana wishing that I could throw Charlotte off a cliff and watch her tiny body float face down in the surf below. I have honestly never hated a video game character as much as I hate Charlotte. During my playthrough, she never once said anything even remotely interesting. Every time she opened her mouth I wanted to kick my cat. I hate, hate, hate Charlotte.

It would be different if there were side characters that might serve as distractions from your primary party. But, this being an old-school RPG, everyone you come across is completely one-note. They spout a couple of lines of dialogue, just enough to mosey the story along, and then disappear from the narrative. For the most part, it is up to your party to push things forward, which means that you get a face full of Charlotte every few minutes.

The Systems In Trials Of Mana Are Simple, But Not Unpleasant

Setting aside the lack of multiplayer (and the shrieking nightmare Charlotte), playing Trials of Mana is fairly pleasant. There is not much challenging to the game, which allows players to zone out and set their brains on cruise control. I’m not the sort of player to smoke a bong before playing videogames, but those folks might find a lot to love in Trials of Mana. Not a lot of brainpower is required.

Combat is basically relegated to four functions: light attack, heavy attack, dodge, and jump. Each character has some basic combos (light, light, heavy), and occasionally you have to jump to reach a flying foe (a heavy attack will usually knock them to the dirt). Holding L1 and pressing a face button will unleash a special attack, but I didn’t find myself using that much. Spamming the light attack often does the trick.

Enemies telegraph their attacks with an MMORPG-style red area that shows up on the ground. Dodge out of the way, and you are usually golden. The strange ring-shaped menu returns from the original Mana game, pausing the action to let you administer heals and buffs. The game supplies more than enough items in treasure chests and the like; you will rarely have to buy anything beyond the next weapon or armor.

Boss fights do spike in difficulty a little bit towards the ten-hour mark, but I found that grinding a bit to stay a few levels above whatever enemies I was facing generally did the trick. During the most difficult confrontations, you might find yourself sitting up and paying attention, as the dodging gets a little hairy. But overall, Trials of Mana is nothing that a kid couldn’t handle.

And maybe that’s the point. There is a possibility that I’m judging a kid’s game too harshly. Indeed, everything about Trials of Mana seems to be geared towards beginners. The game never allows you to get lost, even for a moment (your next destination is always clearly marked with a big star on your minimap). Menus are clean and navigable. Monsters are cute and relatable. You never have any equipment options beyond a single upgrade per character.

Indeed, my own children got over the fact that they could not play quicker than I did and rather enjoyed watching me play (although the seven-year-old did show some evil delight in joining me in my Charlotte bashing). There is a crisp cartoonish aspect to Trials of Mana that allows you to cruise through it on autopilot, without a lot of obstacles. I suppose for some players, that might be just what the doctor ordered. Turning off your brain is a little bit welcome right about now.

Trials of Mana isn’t an awful game, but it isn’t a particularly good one either. It might have been a bit improved by different character work, but in the end, it is a basic RPG that would be good for newcomers to the genre. Though its release is something of an event in the US, players should be aware that this is not an epic retelling of a classic story. Rather, it is a serviceable game that is lightly enjoyable. Proceed accordingly.

Trials of Mana is available for PS4 on April 24.

Beyond the bewildering decision to exclude multiplayer (and some truly awful characters), Trials of Mana is a very basic action RPG that might be good for kids or newcomers to the genre. Playing the game isn’t unpleasant, though it puts up very little fight for experienced players. Know what you are getting into, turn your brain off (and the character voices down), and you may enjoy cruising through its very surface-level gameplay for a weekend.