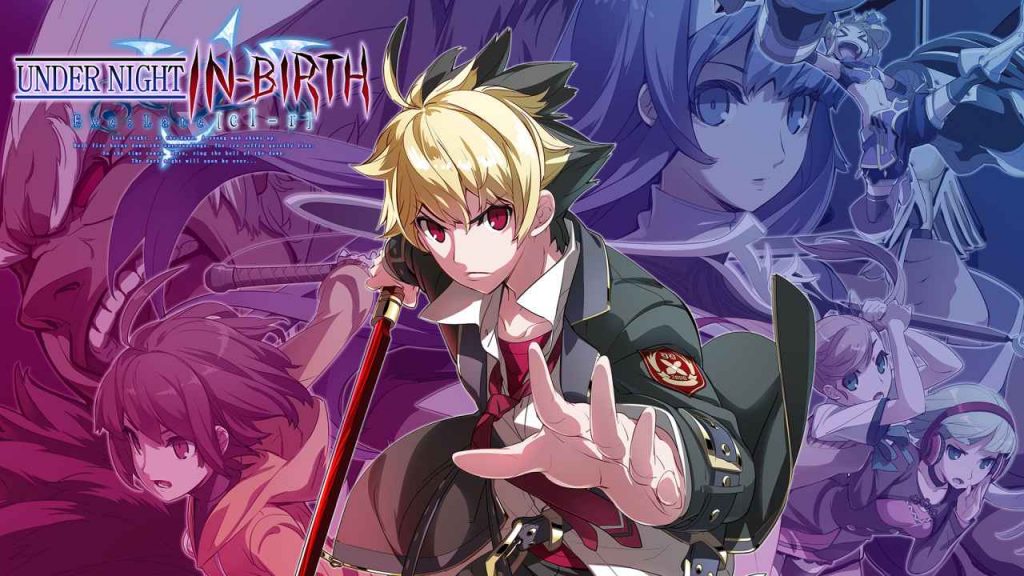 Under Night In-Birth Exe: Late [cl-r] – A Game With a Menu as Long as its Title

What makes Under Night In-Birth Exe: Late [cl-r] such a unique title is that it is multi-faceted. With its ambitions to be part visual novel and part 2D fast-paced brawler, the game boasts a plethora of content sure to keep players, veteran and amateur, coming back for a more.

Chronicle mode is a great place to begin for players interested in the detailed backstory the game is based upon. Here, the lengthy tale of the Hollow Night unfolds over the course of 23 chapters in the style of a visual novel. The story is deep and does a commendable job explaining how everything, including some less important characters, are intertwined within and around the realm of the Hollow Night as the story leads up to the events inside the Arcade mode.

If jumping straight into combat is more your predilection, there is an absolute abundance of game modes to dive into and keep you coming back. Seriously, this game has twelve modes (including Replay and Gallery modes) with an impressive nine modes surrounding combat. These game modes include arcade, chronicles, versus, network (online ranked and non-ranked matches), score attack, time attack, survival, and mission.

The game’s tutorial mode is noteworthy in its own right as it is among the most comprehensive I’ve seen in a fighting game. You’re not relegated to having to spend time in training or practice mode or reading the move list in the pause menu to get a hang of the game. Rather, you are thoughtfully and efficiently walked through every aspect of the game from its user interface, to its combat mechanics and right down to strategic advice from the game’s developers.

My only gripe is that the button icons displayed throughout are the arcade version’s A, B, and C buttons as opposed to their PS4 equivalents. Nonetheless, I would recommend anyone new to series start here after running through the Chronicle mode.

Network play is surprisingly fast and fluid. I did not notice any lag while playing matches and searching for them was also quite quick. There are ranked matches and non-ranked matches called Player matches. The former is pretty straightforward, with ranks being attributed to players based on their performance following 1-on-1 matches with other players. Player matches, however, can be pretty fun as the lobbies or rooms can be set up to allow up to 8 people to join in a tournament-style-winner-continues manner, similar to what you’d get if you had a bunch of your friends come over to play.

A Solid Roster With Some Depth

Circling back to the characters in the game, the entire lineup is back for another bout with the notable addition of Londrekia and his new frosty set of moves. The now 21-character lineup is still lofty, diverse and well-balanced.

French Bread claims its team made approximately 1000 balance-improving tweaks to nearly every character, which appears to be true as you can have an absolute nail-biter between the beast of a man that is Waldstein with his mechanized claws that take no less than 60% of the screen, and the tiny 4-foot Mika sporting her oversized mechanical hand-canons.

Speaking of diversity in a different sense, I appreciate the fact that, prior to the addition of Londrekia, the character lineup was equal parts male and female. It’s not something you see very often in the male dominated, hyper aggressive fighting game scene.

What’s Different About This Hollow Night?

In addition to the inclusion of Londrekia in the roster, and the 1000+ balancing adjustments introduced, there are a few other notable additions in this version of the Under Night In-Birth saga.

For starters, every character has been shown love with five new color schemes and, more importantly, each have been given new moves which are sure to excite fans returning to the series. Also noteworthy is the expansion of Gallery Mode to include new content which includes concept art and Arcade Cabinet versions of various voices in the game.

Graphics Are the Chink in This Game’s Armour

From a technical perspective, I was a bit underwhelmed by the game in the graphics department. Under Night In-Birth Exe: Late [cl-r] doesn’t seem to make much of an attempt to harness the raw horsepower of the PlayStation 4, perhaps since the game was also released on Nintendo Switch and a decision was made to share assets between the arcade, PS4 and Switch versions of the game.

Virtually anywhere you look while in a match, aliasing (see “jaggies”) on both the characters and the environmental elements is prevalent. I further suspect the use of lower-resolution assets because loading was virtually non-existent at any point during my time with the game which was a positive byproduct to an otherwise unfortunate shortcoming.

All this is a shame, because the anime-style character artwork is so fantastically illustrated and the beautiful level design offers good-looking, vibrant environments that are well-suited for unleashing devastating 25-hit combos on opponents. There is a slight disconnect in artistic style between the 3D background and 2D characters, but I personally think they still compliment each other rather well.

The soundtrack for the game is upbeat and energetic and has a classic 90’s Japanese pop-rock feel that fits right in with the visuals and will keep your toes tapping as you work those combos.

The game’s default difficulty setting on level three won’t provide too much of a challenge for players proficient in fighting games, but bump it up to four or five in the game settings menu and prepare to throw your controller. This game has no chill on difficulty five, which should be music to the ears of players looking for a serious challenge.

This Hollow Night is Worth The Trouble

Overall, despite a few technical shortcomings, Under Night In-Birth Exe: Late [cl-r] is a superb fighting game that offers plenty for players to sink their teeth into. Whether you’re new to the series and looking for a solid brawler with a meaty story, or you’re a veteran of the Hollow Night, you won’t be disappointed.

UNDER NIGHT IN-BIRTH Exe:Late[cl-r] was released February 20, 2020 in North America, Japan, and Europe.

If you’re looking for a solid fighting game with tons of content, replay value and a deep story, Under Night In-Birth Exe: Late [cl-r] is a must-have whether you’re a newcomer to the saga or a seasoned veteran.