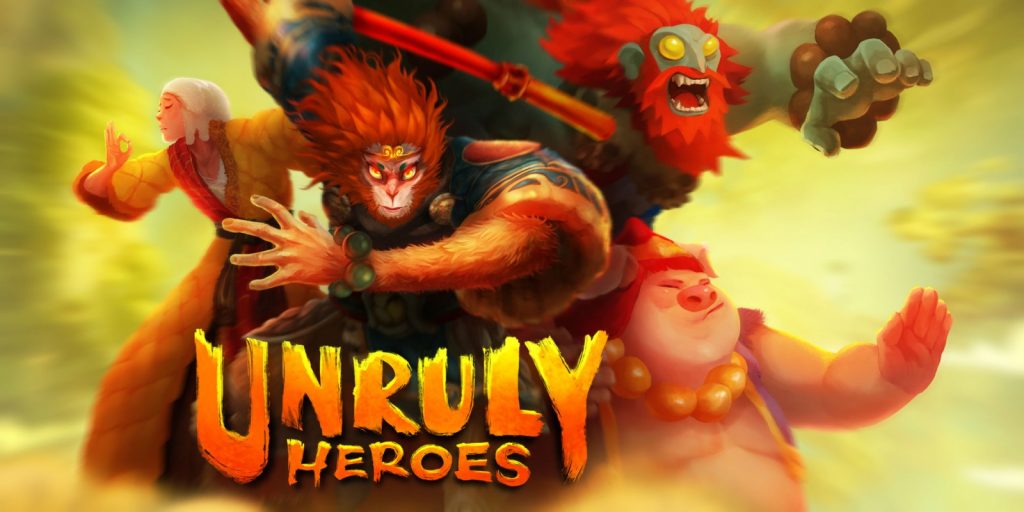 Unruly Heroes is a 2D action platformer developed by the talented team at Magic Design Studios. Journey to the West is the inspiration to Unruly Heroes, a story that I hold very dear to my heart. Unruly Heroes takes the fantastical approach but it’s one that I truly enjoyed. That’s at least up until I got to the later portions of the game.

The sacred scrolls keeping the darkness at bay and preserving peace and harmony in the world have been torn up and scattered across the land. It’s up to the Monkey King and his companions to retrieve the pieces of scrolls and return balance to the land. The story is nothing amazing, and the comedic dialog contradicts the game’s darker art style which really annoyed me, as it just didn’t blend very well together. It also doesn’t help that the voice work sounds pretty boring, as if someone is just reading with a monotone voice.

Unruly Heroes has some great combat for a 2D platformer

Unlike other platformers, Unruly Heroes allows you to switch characters on the fly. Sanzang, Wukong, Kihong and Sandmonk. Each character is unique with their own fighting style and special abilities. I never once felt like one character was better than the others, as each one was useful in different situations. The Sandmonk, for example, fights with magical orbs, making him a great mid-range fighter, while Sanzang is a big close range, hand-to-hand fighter.

Combat is quite enjoyable, as you can mix up combos and even juggle your enemies. Even switching characters mid combo presents a lot of possibilities. I never really had a problem with combat. It flows quite well, especially when an exclamation mark appears every time an enemy was about to attack. These exclamations give you plenty of warning to dodge out of the way.

Boss battles are also a highlight. The old school puzzle solution to the boss fights brings back some great nostalgia. Learning each boss’ attack patterns and having to platform around the environment to reach and attack some of them is just exhilarating. All except the final boss whose difficulty compared to the others is on another level.

If you do happen to die or fail a jump along the way, you won’t have to restart from a checkpoint all the time. Since you have four characters, you’ll just spawn as one of the other three.

In order to get your lost character back, you’ll have to wait for a small bubble to expand, which you can then pop to revive your fallen comrade. I did learn the hard way that this bubble can be destroyed by enemies. If that happens, that character is lost to you until you reach the next checkpoint. I also found the bubbles to be very difficult to see due to their light yellow color blending into the light backgrounds.

Solving puzzles in the vast array of levels requires you to use each character’s unique abilities. Throughout the levels, you encounter statues which depict the different team members. These statues indicate which character is needed at that time for that specific obstacle.

The Monkey King’s statue, for example, will have him place down his pole weapon across a large gab so you can get across. You just have to make sure not to attack with the Monkey King while moving on this created platform, as the pole will return to his hand and you’ll fall to your doom.

These situations become more and more complex as the game goes on. Environmental hazards start to play a big role, making a lot of these puzzles very difficult to get through as they required some precision timing. Later levels will also give you a unique ability shared between characters, like a giant fan that’s used to cool down lava rocks to use as platforms. It’s all well and good, but in the later stages the situations the game asks you to get through become absolutely nuts. The later stages will definitely test your patience, some of which may even drive some players to quit the game.

The level design in general is brilliant. Each world you visit is vastly different, and each stage has you progressing in different ways. One world won’t allow you to attack with your physical abilities, forcing you to progress through the level with just platforming. Another level sees you possess enemies and use their unique abilities to progress. The level design is definitely a major highlight in Unruly Heroes.

Magic Design Studios has really outdone themselves with their amazing animations. Having helped in developing Rayman Legends, it’s easy to see the amazing art design behind it. Unruly Heroes looks amazing, from the backgrounds to the great character animations. Every attack and every jump is animated masterfully. But with something that looks so great, it has a small problem that pokes its head out in the later stages of the game.

As great as the animation is, it comes with a flaw that can plague a lot of 2D platformers. During a lot of the sequences in the game, especially in regards to the platforming, the game can feel unresponsive. This is due to the amount of frames animations have before the next action is registered. The worst of these situations comes when moving left to right. There are a few frames of animation that show the character actually turning. This animation lead to a lot of deaths because the jump was never registered when time I tried to jump during this animation.

The unresponsiveness wasn’t that much of a problem until the last few stages of the game. The final few stages require a lot of perfectly timed jumps, and having to pull off three different maneuvers in quick successions isn’t fun when you have to do it with unresponsive actions due to waiting for an animation to finish.

Unruly Heroes has a lot going for it. Great combat, great platforming, an amazing art style, and some great level design. It’s just a shame that the late game content beings to show some of the game’s flaws, especially when it comes to precision platforming.

A great 2D Acton Platformer with some impressive art design and animation. With plenty of collectibles to find and some strong level design, Magic Design Studios has a winner on their hands.