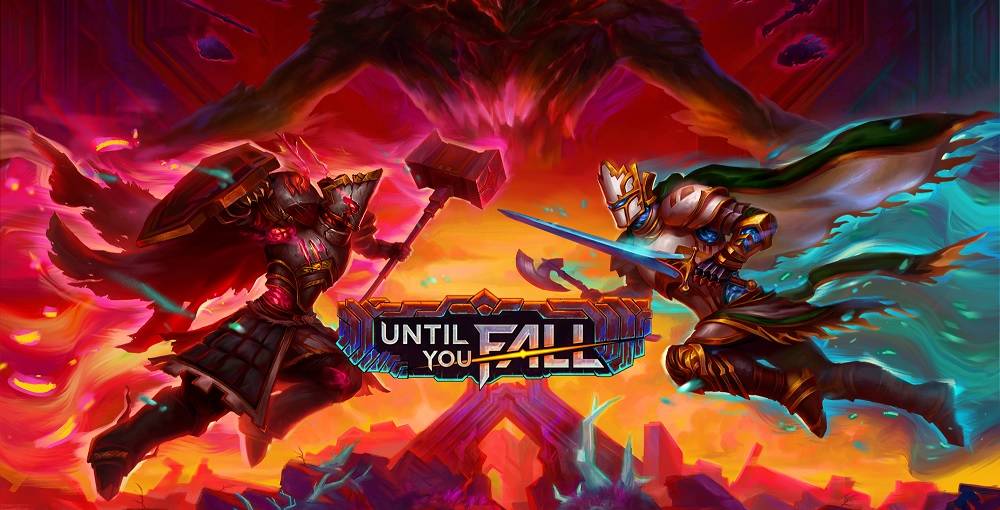 Until You Fall PSVR Review – I had heard very little about Schell Games’ Until You Fall but a quick glance over the hectic and bombastic trailer left me wanting to know and experience more of what it had to offer. It has all the hallmarks of a game I would like; roguelike, dungeon crawler, sword-play. It sounds too good to be true, it sounds right up my street and you could say I was very excited to see what it had to offer.

Until You Fall PSVR Review

Now bear with me, the story this title is quite thin and in my opinion, the narrative is a mere vessel that surrounds your never-ending exploits into this neon-filled, monster-ridden hellhole. Rokar has fallen and the Rokari have been wiped out and you, the last Rune Knight must drive back the horrors remaining with the help of a mysterious Runesmith. As I say, I do not think in any way anyone plays this game for its story as it’s the gameplay that truly shines.

Until You Fall is essentially a room based dungeon crawler. Each room has a varying amount of randomly generated enemies for you to battle through. If you succeed in your jaunts then you will be presented with a choice of three rewards for your troubles. These can range from more health points to increased max health and from better weapon specials to improved stats. You know – standard roguelike stuff so far. It is the combat system and how brilliantly this works in VR that is this game’s real charm.

The combat system is purely melee based with layers and layers of depth and strategy that I really enjoyed. As you are fighting your enemies you can swing either hand to damage them, but be careful though as these enemies are no mere dummies and will swing back. You can block incoming attacks by lining up either of your melee weapons in accordance with on-screen prompts. It’s brilliantly simple, amazingly visceral and completely immersive.

The first few rooms are elementary. It’s all going a bit too swimmingly at this point and that’s when you hit your first ‘real’ enemy. I approached this knight bloke and his swings were so fast I was dead before I even knew what was happening. I think the game lured me into a false sense of security then handed my ass back to me in hilarious fashion. At this point, I was returned to the game’s hub and left to think about what went awry.

At the game’s hub, you are able to use your persistent currency, Ether, to unlock and upgrade your weapons. You can also modify your difficulty settings and try out your new, shiny tools of death on a dummy before you leave. As with most roguelikes, it’s the small incremental upgrades between runs that make or break the enjoyment of the game. This game does it well, it seemed every time I returned I could tweak a weapon or unlock something new to help further my progress within the game.

I once again made it to my nemesis, except this time I was under no illusions of his difficulty. I had also learned a few new tricks like dashing into enemies and had a few new upgrades under my belt. This time, it was still tough but I stood my ground and emerged victorious, it was splendid. I really like the dash mechanic, as you can propel yourself into enemies, stopping them in their tracks and taking off a small bit of their health in the process. Also if you are fighting multiple enemies, it sometimes helps by dashing backwards to regain your footing.

As well as the dash each enemy has a shield, of sorts. You must whittle down this shield by blocking and hitting them, once this shield breaks you go into a critical hit mini-game where you must slash in the correct direction to heavily damage your opponent. Think of Fruit Ninja or Severed and you get the idea. Both your critical hit attempts and dashing damage can be upgraded during each run but do reset each time. As such, it is up to you at the end of each room how you want your character to progress.

The Pinnacle of VR Melee Combat

Further into the game, things get even more hectic, with body movement, big bosses, magic throwing mages and more but I will leave you to discover this for yourself. I will say one thing though. When you are in the heat of the battle, attacking, dashing, blocking, swaying and smashing your enemies, it’s a massive amount of fun. The combat system is superb, I have been waiting for a decent melee VR game for ages and have seen flashes in other games but this game is by far the pinnacle of VR melee combat.

Every battle with each new foe becomes a dance of blades, a ballet of slicing and it is all about blocking correctly and staying on your toes. It’s relentless too, with foe after foe after foe, there’s no let-up, no break, just an avalanche of melee encounters that leaves you breathless. While the story may be a bit generic, the brisk combat and breakneck speed in which you plough through stages more than makes up for it. By the time I wrote this review, I could use my specials, parries and Matrix-like abilities to take on rooms of foes with ease. It felt transcendent.

If I did have a little negative thing to say, it would be that the I would have perhaps liked a bit more enemy variety. yes the rooms are procedurally generated, yes the enemies are random but for the first ten stages you only really get a mixture of four or so enemies. Luckily they are given you in random formations and mixed together so it’s not too bad really. Especially when you have a room full and you are in deep, the enemy types don’t really matter as you are too busy trying not to die and flailing around like a loon.

The VR implementation is just about perfect. I had no tracking issues or any VR ‘messiness’ at all. Everything ran great and was implemented to perfection. You can walk or teleport to move and there are numerous comfort options to suit most players. I also really like the way that Schell Games have made some of the bigger weapons feel heavy. A slight delay when moving them makes them feel weighty and hefty. The load times between each room are nearly non-existent too. Awesome work all round!

The world you are battling through in When You Fall is also very well realized. It’s a neon-soaked fantasy world that looks crisp, is well designed and a joy to kill enemy after enemy in. The adversary models are great and it’s all set to a crunchy synth soundtrack that had me bobbing my head while I sliced through more and more pixel-based victims. Seriously, the music is epic. It perfectly fits the style of gameplay, the music is brisk and so is the combat it is a marriage made in VR heaven. It’s an excellent fit.

I have just come back from a run through Until You Fall to write this conclusion and my heart is still pumping, I am sweating and it’s brilliant. While the story may be bland and generic, the dance-like combat, the energetic nature of the game and the pumping soundtrack more than makeup for it. I love roguelikes and have been itching for a decent melee VR game for ages, this game is definitely both of those things and a game I will keep playing into the future. It’s simply brilliant and one of my favourite VR games of the year.

Until You Fall is out now on PSVR.

Fast, fluid and fun. Until You Fall came out of nowhere and blew me away. The combat system is so moreish and addictive, rewarding and well designed you will not want it to stop. While the story is lacking and the enemies can get repetitive, everything else more than makes up for it. Great VR implementation, amazing music and super-fast load times create a really enjoyable VR experience and one of my favourites this year.