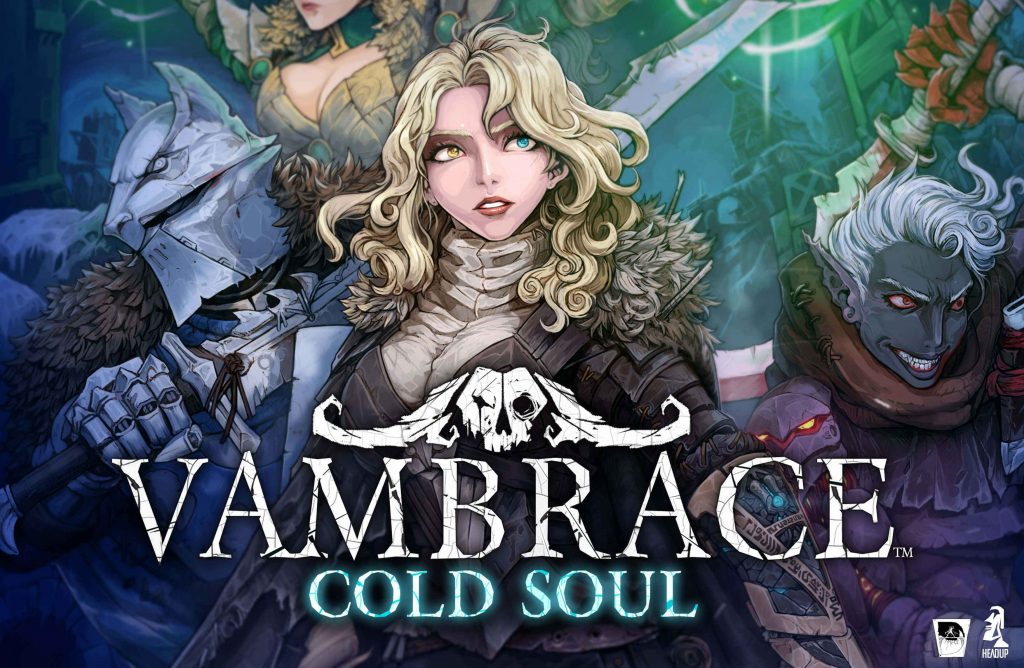 A few years have passed since Devespresso Games released its last title, The Coma. That game, Vambrace: Cold Soul, takes inspiration from challenging games like Darkest Dungeon. Does it have what it takes to stand alongside such a formidable comparison however?

You take on the role of Lyric, a woman who was found frozen out in the cold. Unlike everyone else in the same situation, you are still alive, an anomaly that perplexes the locals early on. Still in the early moments of the game, you learn that your vambrace has the power to thwart the influences of the frost, specifically large frost barriers that have the town blocked in. This fact alone moves Lyric from prisoner to new military recruit pretty quickly.

The early beats in the story fill themselves with heavy exposition and world building, detracting from Lyric herself, the main protagonist. This leaves the beginning of the game feeling equal parts underwhelming and overwhelming, as explanations and tutorials overload your short-term memory. You also meet a lot of different characters that hold very little premise to the overall storyline, and they tell you their life stories in between these thick waves of tutorials. There’s a lot of information thrown at you right away, making it hard to discern what’s important and what’s negligible.

Certain points in the story work better than others. When you can go out into a zone and explore, finding points of interest along the way, is when the game feels immersive. Coupling this with a perma-death combat, and you have the recipe for a tantalizing risk-reward formula. However, the risks involved are quite minimal, as you can always escape combat and return to base with the push of a button. You don’t lose any items this way either.

Perma-death still remains a threat for your party, but Lyric is immune to this. While in town, you recruit three characters to accompany you on your journey, and they will be permanently gone if they fall in combat. If Lyric dies, then your recruits just disappear after they return you to town. Losing party members may feel inconvenient at first, but as you progress, they feel more like husks with necessary stats rather than a party in the truest sense.

On that note, having the proper party makeup is essential to success. You for sure need someone who can detect traps, since they’re everywhere, and someone who can regenerate party health at campfires. The latter point is especially important, because campfires are the only places you can heal your party. This necessity makes exploration more interesting, but it also bottlenecks what you can do with your team.

Since you have all these risks involved with exploration, your party must have characters with certain traits at all times. This means that you must stick with a standard party setup or risk failure. When the game works, it feels like you’re playing a video game representation of a Dungeons & Dragons session, as each action requires a roll to see if you succeeded or failed. This aspect of Vambrace feels really cool, but the repetitiveness of the game waters down that charming nerdy element rather quickly.

Where Vambrace truly excels is its visual presentation. The hand-drawn style works so well in tandem with the overall pace of the game. Combat animations lack much bombast, though, but they get the job done regardless. Even the UI has a simplistic look, fitting nicely at the bottom of the screen.

Vambrace: Cold Soul attempts a fair few different concepts, pushing for a perma-death side-scrolling RPG. While all those elements are present, the greater whole lacks a true sense of immersion as well as execution. Challenge can be overlooked through exploitation, and the few risks involved, like your fellow party members, don’t hold much significance when they die. Consider Vambrace: Cold Soul an effective beginner’s introduction to the perma-death formula.

Vambrace: Cold Soul is out now on PS4.

Vambrace: Cold Soul lacks the kind of depth that more appealing RPG and perma-death titles offer. Regardless, Vambrace looks gorgeous and does offer that first step into the challenging world of perma-death games.