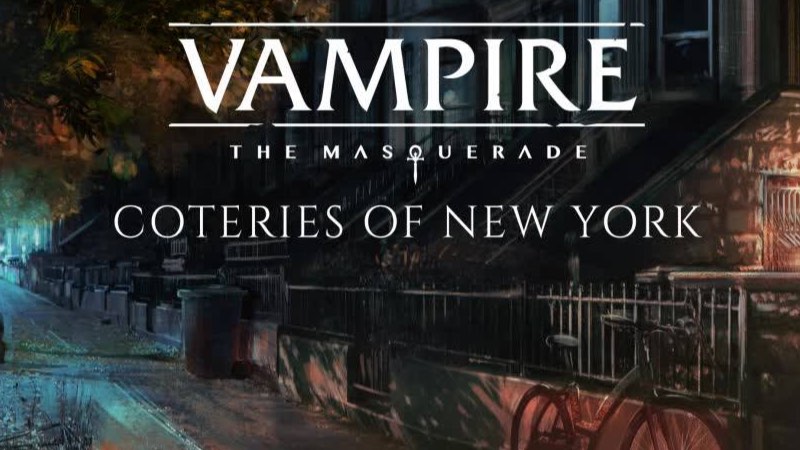 The concept of the Masquerade, a sophisticated collaboration between various vampire clans to conceal their existence from human society through a heady combination of power, influence and economics, hardly seems like a fresh idea. Indeed, for decades in print, media and video games, vampires generally are more about clandestine operations and pulling strings behind the scenes than they are about indulging in a spot of rip and tear on the regular.

Vampire: The Masquerade – Coteries of New York explores this concept to the fullest, casting the player as newly sired vampire, attempting to find their way through the myriad power struggles of the various vampire clans which often spill out onto the seedy streets of the Big Apple’s seedy underbelly.

A Great Introduction To Vampire: The Masquerade

At the beginning of the game you must choose from a trio of different characters which each represent three of the major vampire clans in the Masquerade – the rebellious Brujah, aristocratic Ventrue and the hedonistic Toreador. More than that, each character also represents a fair chunk of replay value too as while the majority of the game is similar regardless of the character you play, each of the trio nonetheless have a decent chunk of their own story and unique dialogue to make repeat playthroughs worthwhile.

The great thing about Vampire: The Masquerade – Coteries Of New York though, is that it attempts to interject a fair amount of interactivity into the visual novel format by providing ample opportunity for the player to make key decisions. Perhaps the biggest and best example of this is how the player decides to work (or not) within the confines of the Masquerade.

A Commendably Compelling Visual Novel In Its Own Right

Being a vampire means that you are subject to the Hunger – a thrumming lust for blood that is simultaneously the source of your power and also the enabler for you to do some very bad things if you overindulge. Thus, in Coteries of New York, balance is a good thing to have but it won’t always get you what you need. For example, drinking the blood from someone without covering your tracks will get you noticed and threaten the Masquerade – causing the more senior vampires to come down on you like a ton of vampire-shaped bricks.

Equally, while not drinking enough can cause negative effects, taking too much blood can unleash the ‘Beast’ that exists within every vampire – an almost primal, insatiable manifestation of their thirst for claret that turns them into inconsolable monsters. Here’s the thing though – whilst you can drink too little, too much or just the right amount – each of those three states unlocks options in various situations that you would not normally have access to otherwise.

Additionally, being a vampire, you soon gain access to special dark ‘gifts’ and talents that allow you to influence situations in various ways, such as dominating the mind of a potential foe or employing deception to get something you need from a character who might be holding out some information. Much like the character choice at the beginning of the game then, this system of unlocking new options and outcomes in situations also adds a fair chunk of replay value, but developer Draw Distance didn’t stop there.

Further into the game you are given the choice to essentially buddy up with one of four different vampire companions – each representing a different clan operating under the Masquerade. With each companion boasting their own unique quirks, identities and stories, this again piles on even more incentive for the player to go back once the credits roll, which sadly, doesn’t take very long at all as Coteries of New York can be completed fairly handily in a single sitting.

As mentioned at the beginning of the review, Coteries of New York serves as a fantastic introduction to the sprawling Vampire: The Masquerade scenario. With its handy dictionary of terms, Coteries of New York does a good job of building the World of Darkness and introducing newcomers to it – handily deconstructing many of the more obscure relationships and complex norms along the way into easily digestible chunks.

Key to any visual novel is the quality of the writing and here, Coteries of New York gives a more than commendable account of itself, deftly interspersing highly descriptive and witty prose with a smattering pop culture references that all help to pull you into the world of the Masquerade. And then finally there’s the audiovisual presentation of the whole thing too.

Like the decadent vampires that serve as its subject matter, it’s often difficult to pull your eyes away from the screen. Though very little is fully animated in Coteries of New York, the various impeccably drawn backgrounds all do a fantastic job of immersing you fully into this unseen belly of New York where dark figures control the every whim of an oblivious and decadent society. One of the better visual novels I’ve played in a while, Vampire: The Masquerade – Coteries of New York serves both as a highly compelling doorway into the Masquerade setting while also being a good (if a little too short) visual novel in its own right.

Vampire: The Masquerade – Coteries Of New York is out now on PS4, Xbox One, PC and Nintendo Switch.