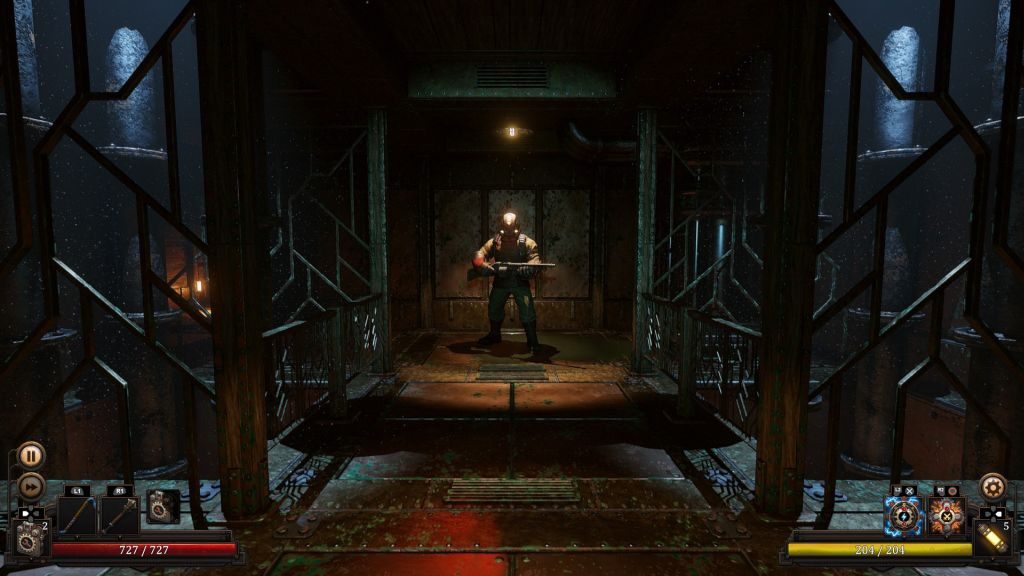 Vaporum – Fatbot Games’ new grid-based dungeon crawler – has extremely high production values for an indie game. The voice acting is well above average, the visuals are extremely well-rendered, the sprawling maps are well-designed, and I didn’t encounter anything that could even remotely be considered a bug. Vaporum also has one of the worst control schemes I’ve ever encountered in a game – an unbelievably complex attempt to wedge PC functionality onto a console controller.

The Core Of Vaporum Is Really Awesome

Before I get to the crazed controls, I want to talk a bit about how cool Vaporum really is. Then I’m going to tell you about the ridiculous mess that Vaporum pukes all over the DualShock 4 controller. Then I’m going to say that you should play Vaporum anyhow. Everybody cool with that?

About five minutes after I booted up Vaporum for the first time, I realized that I was totally in love with this game. At the outset, an amnesiac wakes up outside of a mysterious structure in the middle of the sea (how did this complicated scenario get to become a videogame trope?). Not knowing who he is or why he is there, he heads inside to get some answers.

Vaporum is a Steampunk dungeon-crawler, meaning that the genre’s usual goblins and dragons have been replaced with robot spiders and erector-set constructs. Dank caves have been converted to industrial tunnels, complete with hissing pipes and clanking machinery.

Experience is known in Vaporum as “Fumium”, magic spells are now “Gadgets” and skill points are translated as “Circuits”. And instead of armor, swords, and magic, the player character immediately straps himself into a super-cool Rig (a sort of exo-skeleton), and starts slapping all sorts of mods and updates on it.

Right out of the gate, Vaporum starts players customizing their experience by allowing them to select from several different specialized rigs. Do you want a fast rig, capable of surgically striking enemies with damage and skittering away? Or might you prefer a slower, more powerful brute of a rig, lumbering around smacking baddies with a sledge hammer? Perhaps you just want a rig with a lot of hip points, because you are a coward and are afraid of getting hurt (that’s me).

After you select your starting gear, into the monolith you go. Being a grid-based dungeon crawler, there are plenty of logic puzzles laying about that block your progress. You can expect to pull a lot of levers, push a lot of boxes, and press a lot of buttons. Along the way, you will find letters, logs, and audio recordings, all of which help deliver the story in a fairly natural way.

Players make their way through the bowels of the citadel one square at a time – using the left stick to move forward, backwards and strafe, and the right stick to turn left and right. Anyone that has played modern video games ought to find the method of movement immediately familiar. Vaporum kindly creates a map for players as they play (though there is an option to turn it off for the hardcore pencil and paper crowd).

Exploration and discovery is emphasized, and though combat is a significant part of the game there are fair stretches of the game where players simply focus on puzzle-solving with little concern about battle. Be warned though, that sometimes solving a puzzle results in a suddenly-opened door with hostile robots behind it.

Combat is dynamic and fun. Getting the timing down of when to strike and when to retreat is difficult, but finding the rhythm of the game is half of the fun. The game also employs a cool pause-and-play mechanic that can allow the player to freeze time to decide what their next move should be. This allows even the most timid players (that’s me) to eventually overcome difficult battles by removing twitch elements and making them more strategic affairs.

After picking your initial rig, there are plenty more opportunities to customize your experience. A simple skill tree is implemented, and the player is able to add up to five “circuits” (skill points) to various aspects of their rigs. Players generally earn one circuit per level gained, but can also pick up occasional extra circuits by finding them in lockers and chests.

Each circuit deposited delivers a highly noticeable boost to gameplay. For example, if you enjoy melee combat, planting a couple of circuits into melee weaponry at the outset of the game will boost the damage you do with crowbars and sledge hammers tremendously. As such, some of the higher tiered circuits are level-locked, preventing you from becoming a powerhouse too quickly.

The top of the circuit tree is filled with stuff like melee weapons, pistols, and other weapon types. But further down, the player can really influence the stats that are “under the hood” of the game. As such, I would strongly encourage players to plan a build ahead of time and plant circuits in pursuit of that build specifically. This is not the sort of game you want to go dropping skill points into willy-nilly. You need a strong, focused build if you want to reach the end of the game without a lot of struggle.

Vaporum’s Control Scheme – Why So Complicated?

I often wonder about the decisions that get made when converting a game from PC to console. Condensing a complex keyboard and mouse control scheme down onto a gamepad must be a deep technical challenge. Some games come out of the process feeling as though they were designed for console all along. Others struggle to find a control system that feels natural. Vaporum falls into the latter category.

In the case of Vaporum, it is my theory that the entire crazed control scheme sprung from the dev team’s need to preserve their secret passages when porting the game over from PC. What do I mean by that?

Well, it goes like this: In the PC version of Vaporum, Fatbot hid the very best weapons and gear behind secret doors. The only way to detect these doors in the PC version of Vaporum is to roll your mouse over secret buttons hidden on walls throughout the environment. Being a PC game, you would be controlling your movement with WASD, and using your mouse to interact with the environment.

Now, when converting the game over from PC to console, Fatbot wants to preserve the fun and delight of discovering all these cool goodies, right? But being a console game, players are controlling movement with twin sticks, and typically no cursor is on the screen. No one will ever find the secret buttons unless they have a cursor. What to do?

Well, if you are porting Vaporum, you force the player to hold down the right trigger on the controller to make a cursor appear, then have the player ever so slowly roll that cursor around whatever is on the screen in hopes of coming across the hidden button. What could be done with a mouse in about 1.5 seconds is now expended to a clunky process that takes about 45 seconds.

Vaporum is a grid-based dungeon crawler, so each of the 12 or so maps has literally hundreds of blank walls that players cruise past in their quest to solve puzzles and fight enemies. It is my belief that Fatbot seriously expects players to comb each of these walls for secret buttons.

Obviously, this simply is not going to happen in most cases. Players will either completely ignore the presence of the secret buttons in the game, or they will immediately jump online and seek out maps and walkthroughs. Because the solution that the PS4 version of Vaporum presents them is no solution at all. It may have been better just having secret buttons highlight as players go by them, or giving the player some other visual cue to alert them to the presence of secrets.

The result of this decision cascades down onto the rest of the control system. Suddenly, you are pressing obscure button combinations for the simplest actions. Want to pull an item off of a stack in your inventory and throw it across a chasm to push down a pressure plate? I hope you’ve done finger yoga, because you are in for some wild contortions. Even towards the end of the game, I had to pause occasionally to look up how to perform certain actions.

Vaporum Is Worth Wrestling With The Controls

But even with this wild control scheme, Vaporum is a winner. You just don’t see this type of game that often anymore, especially on console. Not with this level of polish and shine. Wandering the halls and soaking in the atmosphere of Vaporum took me back to my days playing similar games on early PCs, and that is no small praise.

Taking a trip into the monolith at the center of Vaporum is a treat in many ways, and hey, no one ever promised that controlling a rig would be easy.

Vaporum slaps a fun Steampunk skin on an old-school grid-based dungeon crawler, and the results are engaging and fun. With plenty of customization for players to dig into, numerous puzzles to solve, and winning real-time (but pause-able) combat, Vaporum hums along on all cylinders. Though the overly complex control system could be substantially streamlined, the charms of the game overcome the struggle to control it.