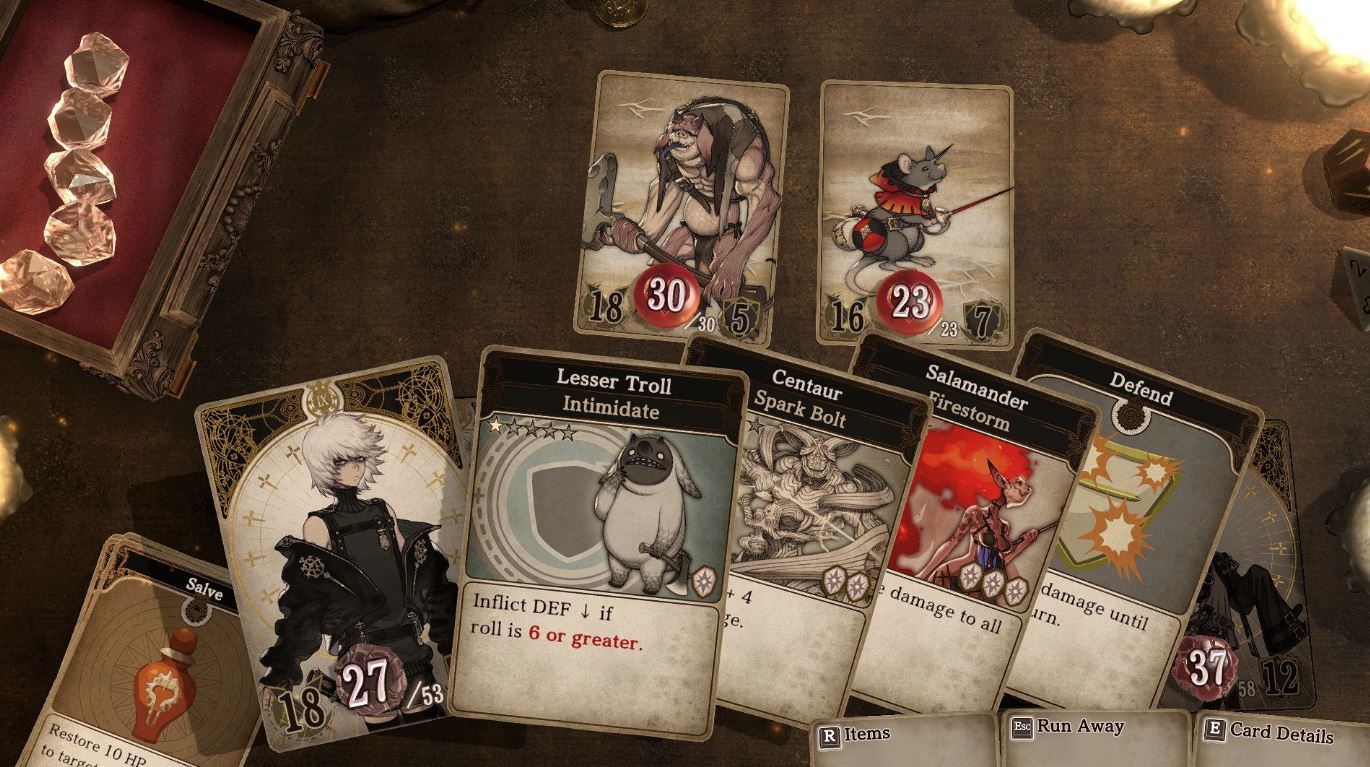 Voice of Cards: The Beasts of Burden PS4 Review 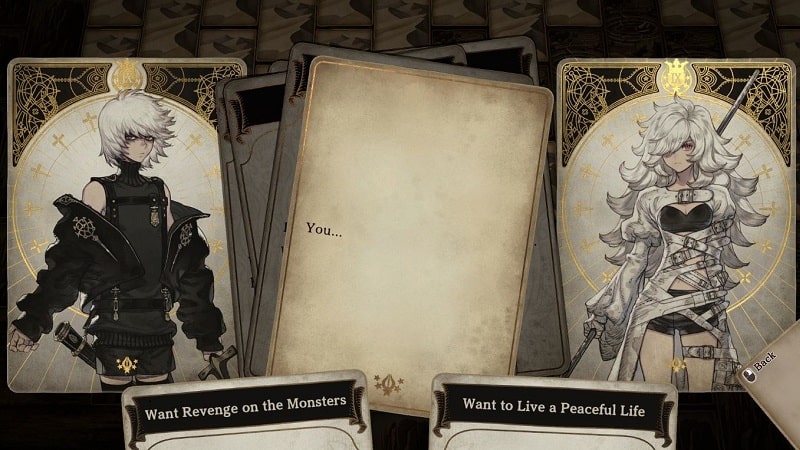 Certainly the most tragic of the three games in the Voice of Cards saga, The Beasts of Burden kicks off with something of a heart-breaking opening act. The central protagonist, a skilled guard that helps to protect a subterranean realm which is constantly under siege by monsters, she soon finds that her world is torn asunder by tragedy. On her knees and praying that death will come swiftly, a mysterious boy appears and represents not only her chance to secure her survival, but also set about wreaking vengeance on the monsters that have destroyed everything she has ever known.

Again, it’s worth noting that The Beasts of Burden plays and looks largely the same as the two other entries in the Voice of Cards series. With its very literal tabletop aesthetic that has a massive table that is strewn with cards which is then swapped out for a wooden table and dice when the battles kick off, The Beasts of Burden continues the ongoing love letter of the Voice of Cards saga to the very much analogue tabletop and table card gaming of old.

As with the other offerings in the Voice of Cards series this aesthetic represents a large part of The Beasts of Burden’s appeal, as the tabletop surface, cards, dice and so on all make Square-Enix’s latest JRPG venture feel much more relaxing and, well, more chilled out than many of its genre peers. It’s also worth noting too, that a great deal of effort has clearly gone into the visual presentation of this tabletop aesthetic, with every card boasting routinely beautiful art and the tabletop environment itself playing host to stylish dice-rolling animations, deck shuffles and more. 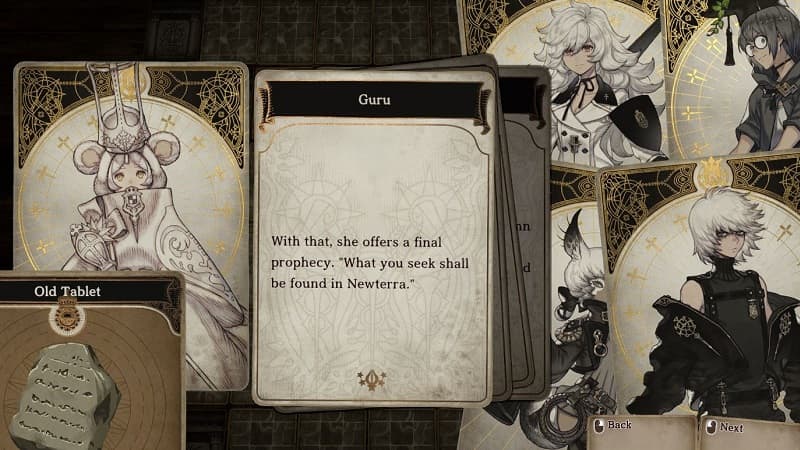 Underscoring this palpable feeling of relaxation is the narrator. Clearly acknowledging the fact that the entirety of this adventure takes place within the confines of this somewhat limited tabletop world of cards, dice and text, the narrator fills in the gaps that exist in the absence of a fully-fleshed out three-dimensional world. Enthusiastically and emotively describing both dialogue between characters and the world that surrounds our protagonist, the excellent narrator is as much a key element of the audiovisual presentation as The Beasts of Burden’s tabletop aesthetic.

Beyond the veneer of its unique style, it’s certainly worth remembering that The Beasts of Burden plays things largely straight as a JRPG offering. Navigating around a map is done by simply moving in one of four directions which causes your play piece to hop onto one card at a time, flipping up adjacent cards in the process to mimic the concept of exploration. Naturally, the exploration that exists in the The Beasts of Burden rewards those who are willing to put the time in as not only can treasure chests be discovered and random battles stumbled upon to grind precious experience points, but so too can special encounters that hark back to the sort of tabletop gaming that Dungeons & Dragons stalwarts will fondly recall.

Usually taking in a specific scenario such as having to evade some sort of trap or some other hazard, these special encounters require players to roll a number that is equal or greater than a required number in order to get past the encounter unscathed. While such encounters certainly do a commendable job in more closely aligning The Beasts of Burden with the tabletop experiences of yore, so too can these events seem repetitive with the same event being ‘discovered’ sometimes two or three times in a row. 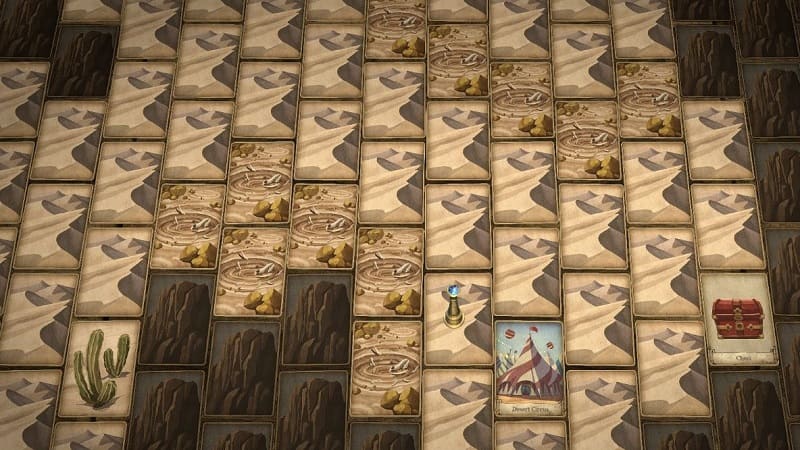 Battles meanwhile unfold in a turn-based fashion with a number of cards at your disposal from which one can be used during each turn. From attack and defence cards, to more sophisticated cards that provide buffs, debuffs, spells and more, it’s fair to say that combat is also nicely straightforward and easy to get to stuck into. Elsewhere in seemingly further compliance to JRPG 101, there are all the usual towns and outposts that one might expect scattered around the world, allowing players to trade piles of precious gold for new equipment, items and even pets. Ah yes, pets.

While The Beasts of Burden is largely the same game as the two other titles in the Voice of Cards series, it does boast a unique hook that helps to separate it from the other two offerings. Leaning into its suffix somewhat, The Beasts of Burden now allows wannabe heroes to either collect defeated monsters on the battlefield, or purchase them from pet shops with a view to levelling them up and deploying them back into battle against their enemies. 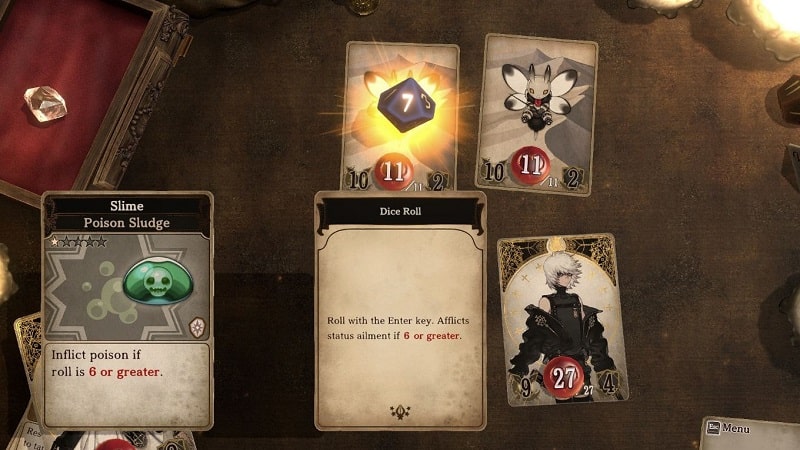 All things told, this whole monster collecting lark represents a great addition to the Voice of Cards series which provides battles not only with an extra dimension, but it also provides more than ample incentive to explore the world and seek out rare beasties for you to re-purpose for your own crusade. The only slight downside to this mechanic is that the monsters you can get are ranked from between one and five levels in rarity and certain side-quests require specific monsters in order to be completed. This can prove to be something of a chore, not least because you find yourself at the mercy of some fairly cruel RNG later on in the game, as you spend hours just trying to get a single, very specific monster to spawn exactly when you need it to.

By maintaining its easily accessible JRPG mechanics, gorgeous tabletop aesthetic and engrossing narration, Voice of Cards: The Beasts of Burden manages to elevate itself above its Voice of Cards brethren thanks to a neat, Pokémon style monster collection mechanic. Much more than just a token inclusion, this new monster collecting mechanic not only expands the player’s arsenal in battle, but provides ample additional incentive to explore The Beasts of Burden’s painterly, card-flipped lands far and wide in search of rare monsters to recruit.

Voice of Cards: The Beasts of Burden is out now on PS4.

By maintaining its easily accessible JRPG mechanics, gorgeous tabletop aesthetic and engrossing narration, Voice of Cards: The Beasts of Burden manages to elevate itself above its Voice of Cards brethren thanks to a neat, Pokémon style monster collection mechanic. Much more than just a token inclusion, this new monster collecting mechanic not only expands the player's arsenal in battle, but provides ample additional incentive to explore The Beasts of Burden's painterly, card-flipped lands far and wide in search of rare monsters to recruit.

Voice of Cards: The Beasts of Burden