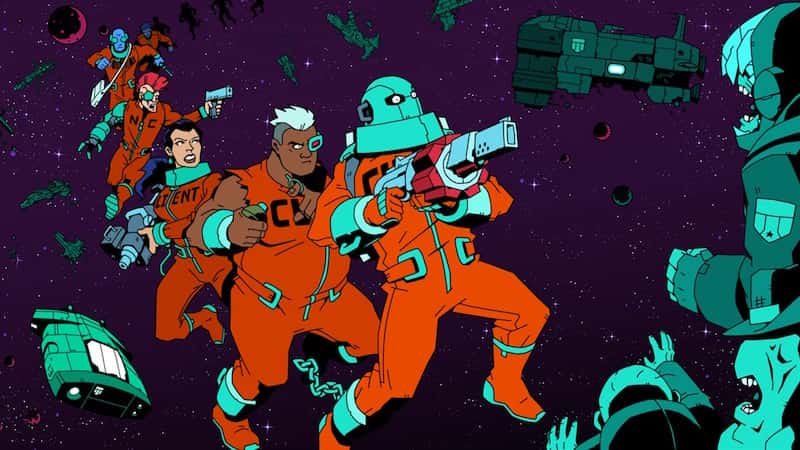 Void Bastards PS4 Review – Amusingly enough Void Bastards from developer Blue Manchu Games is, by the very virtue of its title, all about a bunch of folk being bastards in the void of space – who’d have thought, eh? Drill a little deeper however and something representing an eccentric marriage of Irrational’s BioShock (Blue Manchu Games employs former Irrational staffers) with a comic book aesthetic and roguelike design sensibilities soon emerges, which is to say nothing of Void Bastards cheeky and often bleak sense of humor – though I’m getting somewhat ahead of myself here.

As the titular Void Bastards, a rag-tag group of indentured intergalactic corporate servants/prisoners, you must fight across the ridiculously dangerous Sargasso Nebula as you seek to grasp your freedom with both hands and get the heck outta dodge. Part shooter and part strategy effort, Void Bastards permits survival only if your grey matter can match your trigger finger and it’s here, at the bedrock of its design, that Void Bastards does a remarkable job of ensnaring the player.

Once you’ve been sufficiently interned in Void Bastards neatly put together tutorial – one that does teaches players its first-person shooter ropes whilst also conveying its grimly comical sense of humor with equal aplomb, you find yourself presented with a galactic map in which a number of derelict space craft can be seen. From here, you are tasked with picking out one of these abandoned craft, boarding it and robbing it of pretty much anything and everything that isn’t nailed down. As you might expect though, there are more wrinkles to this endeavor than an old folks home.

For a start, basic survival elements need to be observed. This means that each journey to one of these wrecks costs one day’s worth of food and fuel, forcing you to scavenge plenty of each from both the wrecks themselves and the numerous floating cargo debris that exist in the void. Such considerations are just the first of many that you’ll need to make before you even set foot on one of these abandoned wrecks, too.

You see, overall ‘success’ in Void Bastards is predicated on you being able to secure the necessary components and items to make your way through the nebula and secure your freedom. However, while the pursuit of such things is arguably Void Bastards primary objective, there are a variety of other goodies that you are also incentivised to scoop along the way that dovetail into Void Bastard’s extraordinarily compelling crafting system.

Chiefly, such raw materials that can be combined to fashion new gear that provides upgrades to the health of your current Void Bastard, provide bonuses in the chance to find specific pieces of loot and so on and so forth. Brilliantly, there are a whole number of other factors that can utterly disrupt your planning too. Derelict ships can, for example, be devoured by massive Void Whales (don’t ask), meaning that a ship with precious cargo that you have your eye on could be destroyed before you even get there.

Equally, pirates that are inhabiting the same derelict ship as you present a substantial threat – hounding you with lethal force and changing a loot run into a furious escape as you seek to frantically unlock the exits in order to flee. If Void Bastards demands a hefty amount of tactical acumen on the part of the player, then so too does it ask something similar during the face shooting part of its overarching design equation.

Once you find yourself on board a derelict wreck, it’s here that Void Bastards first-person shooter sections begin to unfurl with confidence. Before you get started with all that blasting and looting, Void Bastards impresses one last tactical concern upon you. Presented with a map that identifies the procedurally generated layout of the ship, you must work out the order in which you’ll have to tackle each of the rooms. Do you tackle the helm and nab the map plans that show you where loot can be found, or do you hit the security room to disable the surveillance turrets?

Once into the first-person shooter portion of Void Bastards – which for the record takes up the massive bulk of your time, its strong comic book stylings manifest in earnest. Though the heavily cel-shaded environments and character models do a commendable job of evoking that template, there are other neat odes to that format too, such as visual text cues to represent sound effects such as ‘squelch’, ‘bloomph’ and other comic book influenced oddities. It works though! The comic book aesthetic that Void Bastards embraces bleeds through every aspect of its presentation and lends the whole experience quite a unique look to say the least.

Winding your way through each procedurally generated derelict is a joy as your foes – a variety of misshapen and oddly chatty creatures of the void each present a unique challenge. The ‘Tourist’ for example, is essentially a great big blob of veiny jelly with a hat that squelches around the place but will explode if you get too close and is something you can use to your advantage in order to clear a room of them pretty quickly.

They’re a comical bunch too – often uttering such phrases as “you’re not my 5 o’ clock!” if they spot you, or, “oh do shut up, Barbra!” in tremendous English and Aussie accents, it all ties into the overall dark comedy that oozes out Void Bastard’s pixellated pores.

Of course, the truth is that you will die and die often, thanks in no small part to all manner of turrets and other hazards can stymie your attempt to rob a ship of its precious bits and escape with your face intact. Here’s the thing though, like BioShock, the amount of creative latitude that you have when it comes to combat is significant to say the least.

The most important thing to consider in Void Bastards is that every bullet, grenade and gadget you take with you onto a mission is yours and won’t be magically replenished as soon as the mission ends (unless you’re lucky enough to loot such items mid-mission). As such, there’s an economy of violence at play where because every bullet counts, the way you approach combat in Void Bastards is markedly different as a result – to the point that more often than not it’s often much more prudent to avoid confrontation and simply stealth your way through to where you need to go.

There are other things you can do in order to tip things in your favor. While turrets can be deactivated (or disabled entirely if you have the necessary credits/skill), you can make use of crawl spaces and broken windows to speed your ingress or egress in or from various rooms on the ship.

Also, you can do other fiendish things too, such as using a ‘kittybot’ to distract enemies before blowing up in their collective faces, or the handy rift gun that allows you to suck up an enemy, store them in the gun and put them down somewhere of your choosing, like, I don’t know… an airlock before you hit the release button and blast them out into the frigid void of space. Other less violent means to deal with your enemies are at your disposal too – such as upgrading your own capabilities with a buff from the local canteen of the ship, or, just the simple ability to lock the doors behind you to prevent unwanted enemies from busting on through.

It’s not just the layouts of these derelicts that are procedurally generated either, as each one also comes with unique modifiers which help make the experience feel that much more bespoke. Whether these quirks that work in your favor, such as all turrets and surveillance equipment being disabled, or don’t, such as continual power outages (which prevent you from accessing the mechanized lockers containing precious loot) or reduced oxygen supply, each new derelict feels like a fresh new challenge all the same.

Combat in Void Bastards then, much like the other aspects of its design, requires a keenly focused mind and it’s refreshing to have such an effort as this which taxes you in this way. Even failure ties neatly into this whole overarching design too, as each time you die, you return as an all new Void Bastard that has a set of unique traits that will either help or aggravate you depending on how lucky (or unlucky) you happen to be. Having the ‘smoker’ trait for instance makes you cough, potentially alerting enemies to your presence, while on the flip side, you might have a trait that lets you unlock locked doors and chests quicker, for instance.

In addition to the unique traits that each new Void Bastard brings to the table, the game also takes care of you from a resource perspective too. Each time you die, the next Void Bastard that you take control of kicks off things with a special care package of health and ammo, always ensuring that you can never kill yourself into a dead end, as it were. Void Bastards then, is no slouch when it comes to the finer elements of its roguelike design.

All in all then, Void Bastards is a hugely fresh mixture of BioShock style FPS shooter mechanics, strategy and roguelike design, but there are a couple of blemishes to its overall offering that sadly detract somewhat. Though the procedurally generated ships with their unique characteristics help to keep things fresh, the level design is almost entirely flat, with an emphasis on claustrophobic corridors, vertically challenged architecture and repeated room layouts rather than anything grander than that. Once you’ve seen one dining suite, you’ve seen them all.

Another issue is that sometimes, when the screen gets busy with all sorts of enemies and visual effects, the framerate can take a dive – and this is on PlayStation 4 Pro no less. So hopefully, some sort of performance patch will be coming down the pipe to address that issue. Ultimately though, Void Bastards is a ruthlessly compelling tactical shooter that blends in a wicked sense of humor and elements of roguelike design in a way that is hugely enjoyable. Honestly, you can do much worse than spending some time with these Bastards of the Void for a good 15 or 20 hours.

Void Bastards is out now on PlayStation 4, Xbox One and PC.

An intricate and entertaining amalgam of BioShock, comic book visuals and roguelike design with a hefty dose of dark comedy to boot, Void Bastards is one of the most refreshing shooters to come along in a good long while.