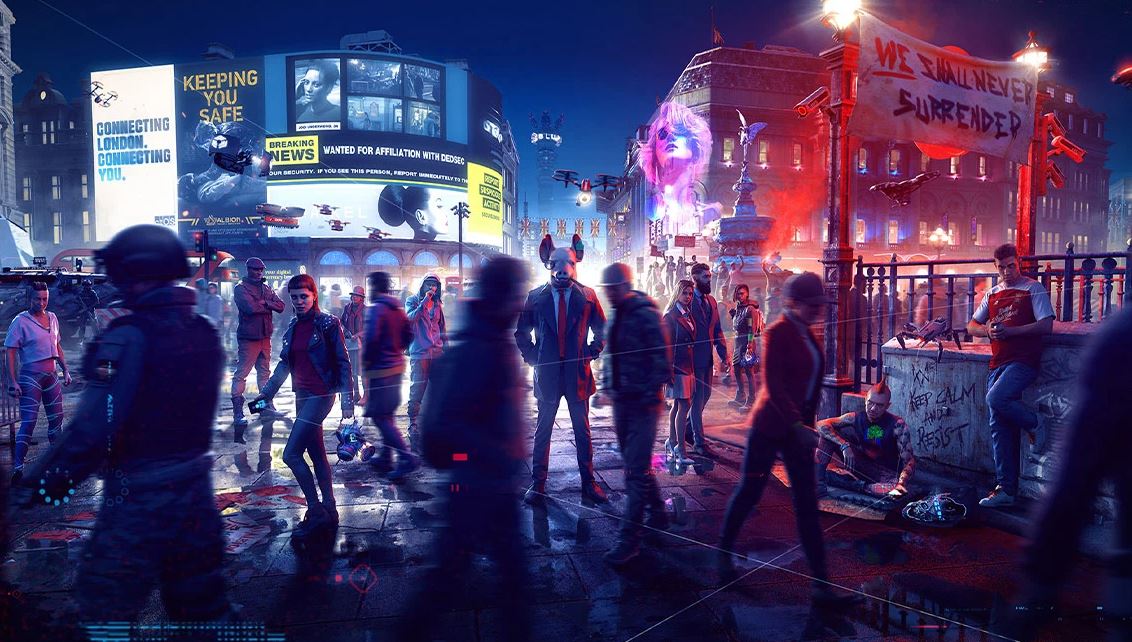 Watch Dogs Legion PS4 Review – It’s fair to say that Watch Dogs Legion faces an uphill struggle. One of three Ubisoft open-world games released in the next month or so. The first significant Ubisoft game to arrive in the wake of a slew of controversies surrounding the company. The last big game before the start of a new console generation, and the third entry in a series plagued by overhyping and tonal inconsistencies. Even a great Watch Dogs game would struggle with this much baggage. Unfortunately for Watch Dogs: Legion, greatness is not wholly forthcoming.

A New City And A New Resistance To Form

Continuing in the same world as the first two games where tech revolutionary group DedSec fights the power via hacking-based shenanigans. Legion heads across the pond to less-than-jolly old England to continue that fight in a new story set in a large portion of London.

While in reality, we currently live in a world on the brink of Brexit fulfilled, Legion takes us past that dystopian reality and into an even more dystopian (because who doesn’t want an extra dollop of dystopia?) future that’s looking slightly less far-fetched by the day. A private military group known as Albion have seized power after a terrorist bombing cripples the Capital. DedSec is framed for the bombing and is hunted for the crime as a result. The story concerns the rebirth of DedSec, just as the population really needs it. So begins one long quest to enlist the help of the citizens of London, rebuild DedSec, and taking back control of the city.

Doing so requires people from all sorts of backgrounds and Legion’s big draw is its recruitment system. It essentially allows you to employ, and thus play as, any NPC in the game. Each has a set of traits that makes them somewhat unique (though, naturally, there’s a lot of repetition given the sheer size of the population). Abilities that can crop up include specialized drones, gun kata, improved hacking skills, personal vehicles, and passive ‘skills’ such as untimely flatulence. As you collect tech points, you can acquire new weapons, technology, and skills that can be used with any character. By the time you get deeper into the game, a fully upgraded squad of deadly hacktivists is at your disposal and the fact they could end up being anyone, from a hipster assassin to a doddering grandad is perhaps the best part of the whole gimmick.

It’s something that should be mind-blowing. A city full of varied NPCs for you to be and I’m not sure if it’s just because it’s so well implemented that it doesn’t feel that mind-blowing or if it’s just the underlying game is so wedded to the template set out in many a Ubisoft title of the last five years that it dilutes the wonder somewhat. Maybe it’s because it takes away one of Watch Dogs 2’s greatest strengths in a singular, likeable protagonist.

Watch Dogs 2‘s Marcus was a splendid upgrade from the dire and trope-ridden Aiden of the original Watch Dogs, so in making you be anyone, you feel less connected to the story. There’s no denying that the multi-protagonist angle provides some mirth, merriment, and variety, but not one of the thousands of possible heroes of this story are close to being as fleshed out and human as Marcus was. It doesn’t help that the default voice options appear to be stereotypical Cockney, Northerner, or Posh Toff, all of whom say at least one ‘fuck’ in every three words spoken.

On the upside, the option to have them permanently die adds a bit of spice to your battles. You may not connect with them on a storytelling level, but the old XCOM Ironman Mode feeling of forever losing a character you’ve upgraded and improved due to one chaotic moment is morbidly enticing.

A Mixed Bag Of Characters

The permanent fixtures in the story, the bad guys, and the player’s support team are generally better, but still, very hit and miss. The talkative DedSec AI, Bagsley, is an insufferable interpretation of the sarky British tech guy. Not only has it been done to death (even by Ubisoft itself, most notably with Danny Wallace in Assassin’s Creed II), it’s been done better. Here it’s a painfully unfunny, almost detestable presence that adds another layer of disconnect to a story that feels a bit off.

The takedown of a totalitarian leadership, grounded in the grim reality of Brexit, could be a message of hope, a welcome virtual catharsis for the frustratingly bleak picture outside the window. It does give you little shreds of that here and there, but the reality bites far harder than the often aimless fiction presented here. Legion swims around the point of its tech uprising without a real focus on it. The sight of jackbooted thugs pushing innocent civilians, aggressive checkpoints set up around the city, and the alarmingly high drone presence certainly gives the idea of oppression, but it’s an uninspired idea when we know that’s just surface-level stuff, not the true signs of cruelty and oppression.

It’s a bit naive and an overly simplistic way of presenting it, and perhaps speaks to the constant struggle between Ubisoft making games based on political issues, but not actually wanting to deal with the politics themselves.

A By-The-Numbers Open World To Fight Through

I didn’t really care about liberating London because I was invested in the plight of the people, cathartic as that might be sometimes, I did it because the game laid it out for me to do in pretty much the same way most open-world games do. You take over areas, collect things, and tick off checklists. Those things are fine, and Watch Dogs: Legion’s tech tools make it a very good game to just mess about in, it’s just that like it did back during the early years of this console generation, Ubisoft has once again got caught in that negative spiral of overused ideas, and if the things behind it don’t stand out enough, it becomes glaringly obvious.

There are some bright sparks to the story though. Not much touches the zanier moments of Watch Dogs 2, but there’s some Black Mirror-esque tech horror that works really well. It’s in moments like these that I would have preferred a more streamlined storytelling experience with a singular protagonist. A sprawling open-world may be the Ubisoft staple at this point, but there are times it serves to undermine the impact of its storytelling. Which is unfortunate, as London is one of the company’s better open-world maps.

It’s so rare we get a modern European city to play around in, so Legion’s setting is a refreshing treat. I’ve visited the Capital a fair bit in my life, and it’s genuinely cool to recognize places I’ve visited and streets I’ve walked down. The brightly-lit near-future tech overlaying the familiar dismal grey of the city ensures it’s got some vibrancy missing from real life, and at night there are examples of beauty to be found while wandering the boroughs, listening to the buzz of traffic, and chatter of pedestrians. Nothing gives an incentive to complete tasks quite like a bit of exploration, and Legion captures the atmosphere of London so well. Whilst general job-to-job journeys are quite enjoyable they do become routine and the combat becomes increasingly monotonous.

The story and setting are obviously key parts of Legion’s package, but the action is what’s ultimately going to keep you engaged and it’s not much of an improvement on Watch Dogs 2’s solid, but flighty setup. Non-lethal play is once again the focus, and there’s plenty of stun-based weaponry and tools to keep things as murder-free as possible. Hand-to-hand combat involves a simple combo-based system and has some stylish final flourishes, but fisticuffs get troublesome when more than one foe is involved thanks to iffy targeting. Guns, stun or otherwise, lack the necessary oomph to really sell their effectiveness, which is something the previous games suffered from. Wherever possible, it’s preferable to avoid direct confrontation.

The real satisfaction comes from using your gadgets and hacking tools as you sneak about. The spiderbot is probably my favourite tool. When upgraded, it can cloak itself, knock out baddies, and even cloak their unconscious bodies, as well as doing its bit in unlocking doors, accessing otherwise unreachable computer systems, and the like. Again, the Ubisoft model of stealth in its games is not an especially groundbreaking formula, but it is still one that scratches a particular itch very well.

It’d be very easy to say ‘well, forget the story and this is fine’, but because of the reality behind the story, not to mention the reality behind the company making the game, it’s a lot more aggravating than it would normally be. Yes, Legion is a solid, enjoyable future-tech romp around Old London Town despite its storytelling and character woes, nothing changes that.

The problem doesn’t vanish though, and much of the negativity that brewed up when thinking about this game comes from annoyance at how those things have been handled and how much they expose the fundamental flaws of Ubisoft’s increasingly tired open-world formula as a result. The same old collectables, mission structure, and liberating of areas to progress that are found in countless titles, Ubisoft ones especially, crop up time and again. Not to mention the same old routines in how it plays. As seen in successful Ubisoft titles, this isn’t necessarily a huge problem if the parts click together in the right order, but this is definitely another instance of the weaker parts debilitating the overall structure. It’s not as wrong-headed as last year’s Ghost Recon: Breakpoint, but it’s definitely not starting any revolutions either.

While Watch Dogs: Legion does the basics well and has a refreshing change of scenery, it moves backwards from Watch Dogs 2 in terms of characters and storytelling. It’s still quite enjoyable to get up to tech-based naughtiness in London despite that, but the underlying open-world template Ubisoft keeps using ends up feeling overexposed here.