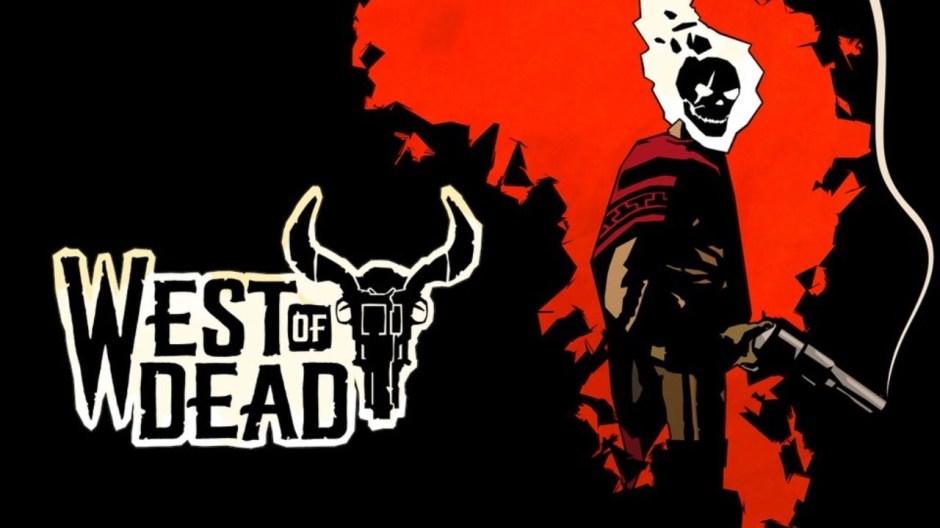 West of Dead PS4 Review – With games that embrace roguelike design, finding a way to keep the randomised repetitive levels and content fresh is something of an omnipresent bugbear that many developers have simply not been able to overcome with any degree of consistent success. West of Dead however, from Upstream Arcade, fares better than most on this front to say the least – invigorating the roguelike formula in a way that makes every playthrough feel utterly irrestible.

At its core, West of Dead is an isometric, twin-stick cover shooter in which players find themselves cast as a one William Mason, a soul damned to Purgatory with a flaming skull where their head would normally be. Your job, as you may have already guessed, is to blast your way out of Purgatory in an effort to discover who sent you down there in the first place. The fact that Purgatory serves as the setting for West of Dead also ties in neatly with the roguelike design that is used, as each death simply returns you to some kind of ethereal saloon where you dust yourself off and go it at again in hope of a better result.

When you are alive (well, dead) and kicking, West of Dead’s cover shooter fundamentals are handled extremely well. Getting into cover is done automatically – your flame-headed character will naturally ‘stick’ to any piece of cover that he is close to. Thankfully, the magnetic range on this mechanic is appropriately close, so you won’t find yourself unceremoniously yanked into cover when you least expect it. Getting into cover though, is just the start of things.

You then have to deal with the idea that most of the cover you decide to hide behind is not terribly durable. This means that you cannot stay in the same spot indefinitely and so you need to think of creative ways to come out on top during each battle. Whether that’s darting from cover to cover, vaulting over cover to get up close and personal with a shotgun, or taking advantage of West of Dead’s precision evasion mechanic, whereupon a last second dodge roll slows down the action momentarily and allows you to escape with no damage, there’s no shortage of ways for players to end just about any given fight.

When it comes to popping off with your firearms, West of Dead offers little assistance when it comes to automatic aim. As such, squeezing down and holding either the L2 or R2 trigger, depending on the gun that you wish to use, will create an aiming reticle which will thin the longer you hold it down and thus, creates a much more accurate shot. The kicker here though, is that rather than just rendering a straight line from you to the your target, West of Dead instead relies much more on player judgement and skill, making the whole endeavour feel a lot more satisfying as a result when you pull off the perfect kill-shot.

Neatly, as you can only equip and use two guns at any one time, you have to be extraordinarily conscious of the properties of whatever boom-stick it is that you’re currently using. As each weapon has its own damage rating, optimal range and reload times (reloading is done automatically as soon as you run out of ammo), there will be some situations where it isn’t always advisable to just use whatever weapon comes to hand and again, this is just one more way that West of Dead impresses the need for a unique approach to combat on the part of the player.

Beyond the use of firearms, players can also leverage a number of gadgets to help them in combat too. Also restricted to no more than two being in use at any one time, West of Dead provides players with all manner of explosives, smoke bombs, molotov cocktails and lanterns as a means of complimenting the guns which are so readily available as a means of inflicting damage upon the enemy. Ah yes. The lanterns.

As well as bullets, bombs and fire, light is also a key weapon in your fight against the ethereal denizens of Purgatory. If you’re able to create an explosion of light around an enemy by either igniting a lamp or throwing a lantern towards your enemies, they will be stunned, allowing you to deal a wealth of extra damage or even destroy them outright. Oh and, if you’re wondering about melee weapons, West of Dead has them but somewhat oddly they fall under the category of a ‘gadget’ and so can only be used sparingly as they operate on a cooldown. Weird, I know.

Of course, the gunplay and combat in any shooter worth its salt is only ever as good as the enemies that you’re tangling with and in this, West of Dead certainly doesn’t disappoint. Whether you’re dealing with ghoulish sharpshooters, giant swamp trappers, bloated plague monsters or horrific hellbats that have a ragged, flapping abyss where their faces would normally be, the sheer selection of baddies that you’ll tangle with in West of Dead are a resolutely challenging and interesting bunch that always keep you on your dead toes.

It’s a credit to the depth of West of Dead’s excellent combat that I haven’t even really touched on how the roguelike side of things work, and yet this is another area in which developer Upstream Arcade shows a distinctly practised hand. While iron collected from fallen foes can be used to purchase new weapons and gadgets from the shopkeeper that you occasionally find on your travels, it’s the quantities of Sin that you can also scoop up from fallen enemies and bosses that provide a direct throughline into West of Dead’s roguelike sensibilities.

Between each level, our protagonist William Mason can consult with a mysterious seer who can trade in his hard-won sin against permanent upgrades that persist through each playthrough. As such, this makes each playthrough feel completely worthwhile – because even if you don’t get everything done that you might like, you can still put leftover sin against these upgrades. Notably, this effectively allows players to save up for these items in much the same way that Dead Cells also permits players to chisel away at more expensive items over a series of playthroughs.

Brilliantly, these upgrades can be obtained by defeating especially difficult enemies or looting them from treasure chest, both of which provide ample incentive for our flame-headed gunslinger to wander off the beaten path.

Speaking of the beaten path, West of Dead also provides players with no shortage of risk/reward scenarios to consider too. One such example are the damned souls that you’ll occasionally encounter. Often cloaked in shadow and cowering in the corner of a room, these poor souls ask our protagonist to take on their burden so that they might get rest at last. In practice, this means that you must kill a number of enemies while a single hit will kill you outright – mechanic that bares great similarity to the curse mechanic that fellow roguelike Dead Cells leverages to great effect. Hey, there are far worse games to be inspired by.

Sometimes however, death in West of Dead can be thrust upon the player unfairly. While the well-designed bosses that conclude each chapter of the story and provide us with increasing insight into William Mason’s life are challengingly enjoyable encounters, the outlaws that you’ll randomly come across are a different matter entirely. Massively damaging enemies that attack extremely quickly, their most insidious trick is how they just appear out of nowhere and shut the door behind you – the end result usually being an untimely death and often spelling the abrupt conclusion to an otherwise successful run.

Nonetheless, West of Dead carries itself extraordinarily well not just in how it exercises its cover shooter mechanics, but in how it cohesively melds those aspects with a roguelike design bedrock in such an edifying way that wanting to play just one more session proves an almost impossible impulse to resist. Decked out with stylish cel-shaded visuals and with Hollywood actor lending his distinct, gravelly cadence to the main protagonist, West of Dead makes a compelling case for itself as not only an excellent roguelike effort, but easily as one of the most stylish too.

West of Dead is out now on PS4.

A furiously stylish roguelike gothic western that blends genres with deft and aplomb, West of Dead is a resoundingly enjoyable offering that makes picking yourself up and dusting yourself off after every death a ravenously compelling proposition.