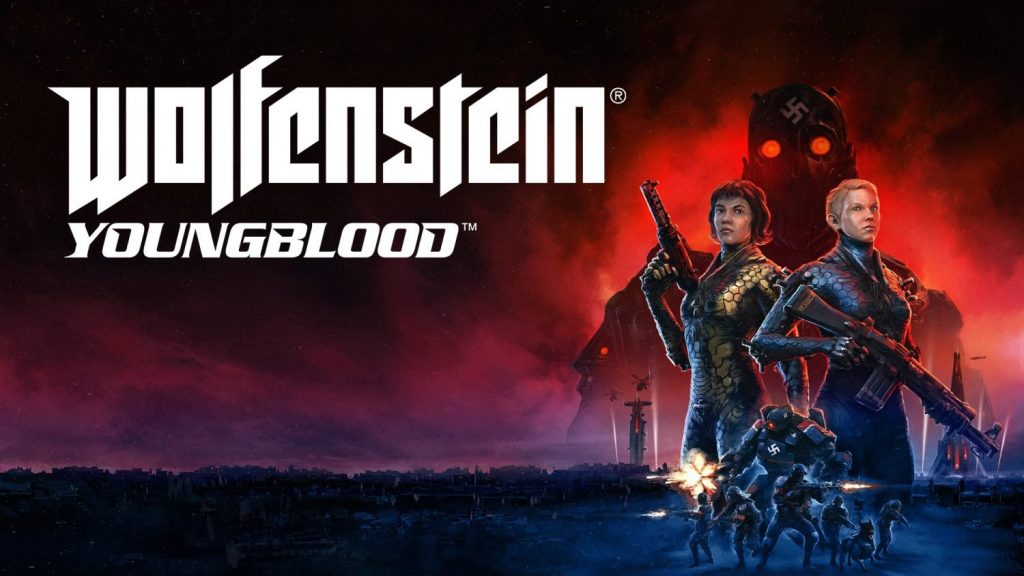 The first thing to know about Wolfenstein: Youngblood is that this game doesn’t follow the formula of The New Order or its sequel The New Colossus. MachineGames and Arkane Studios have focused on creating the best combat experience in the franchise with enhanced movement abilities and a bunch of unlockable weapons and abilities, creating arena-style combat rather than linear, long-corridor combat. That shift of focus has meant that the narrative and the supporting cast of characters are the most forgettable in the series.

Youngblood skips forward 19 years from the conclusion of The New Colossus. BJ and Anna’s twin daughters (Soph and Jess) are now young adults and being taught how to survive against the Nazis by their two parents. The whole family has lived a happy life in Texas since the liberation of America at the conclusion of the last game.

At least, that was true up until BJ left America under a false identity. Anna, Soph, and Jess don’t know why he disappeared. So, Soph and Jess, along with Grace’s daughter Abby, impromptu take Grace’s helicopter and Power Suits and make their way to Paris to find BJ, eventually joining up with the French resistance along the way.

Once they meet the Resistance, Jess and Soph brave the streets of Paris to take on a variety of missions for the Resistance, with Abby providing intelligence over the radio. This trio is by far the best part of the narrative side of Youngblood. Jess and Soph are delightfully quirky, behaving and making jokes exactly how siblings would. The banter between them is some of the best dialogue in a game this year and the Wolfenstein series overall. There are countless memorable moments between them, such as when they approach their first Nazi and realize just how woefully nervous and unprepared they are, leading to one of the multiple genuine laugh-out-loud moments throughout the game.

Their personality even comes through when you are in an elevator with the game taking you to a third-person perspective as you watch both of them muck around as they wait for the elevator to stop, adding a dash of exuberance to a series that has previously been restricted to the long, thoughtful, contemplative monologues of BJ.

Abby is a great counterpoint to Soph and Jess as she is a little more serious and often gets a little weirded out by just how much the twins are in their own worlds at times. Being 19 myself, MachineGames have done a great job of capturing the teenage spirit and just how much we find humor in a variety of things that older adults do not.

The supporting cast of characters nowhere near match the loveable nature of Jess, Soph, and Abby (or the supporting cast from The New Order or The New Colossus) as most of them are relegated to mission givers, with the side missions they give you being forgettable, filler fetch quests. Similarly, the overall narrative of the game is forgettable with the story not offering anything of substance until the final hour or so of the game, where a discovery is made paving the way for a very exciting and somehow even wackier Wolfenstein 3. It isn’t bad by any means, just inconsequential.

So, without that compelling narrative or supporting cast of characters, the combat would have to make up for that loss. And, well, it does! Multiple additions to the combat in Wolfenstein: Youngblood makes it the most dynamic and fun in the series.

The first change comes in the form of the additional movement abilities that have been added to the Power Suit in the 19 years since we last used once in The New Colossus. You now have the ability to double jump to a second story or balcony, allowing you to get the drop on a Panzerhound or a group of soldiers, hailing grenades from above. You can also dash from side to side to quickly dodge bullets and combining both of these techniques allows you to escape combat and recover or frantically duck into a building to find some health and armor.

Secondly, new ammunition types encourage you to diversify your playstyle and the weapons you use by matching the ammo type of the weapon you use to the armor of an enemy. There are two types of ammunition and two armor types. Not matching them will significantly decrease the amount of damage you do leading to many painful and quick deaths. It is a fundamental part of combat in Youngblood.

The combination of these two changes transitions the combat of Wolfenstein away from a corridor-shooter and into an arena-shooter. That change is for the better. Switching weapons, dashing, and jumping around as you mow down Nazis, drones, and mechs left and right is incredibly fun and encourages a more aggressive playstyle. Weapons reload quickly, guns pop with every bullet fired, and enemies and robots gib and break apart like they are made out of plasticine. The combat reminds me so much of DOOM, with how much you are encouraged to move and switch weapons.

As this aggressive style of combat is encouraged, stealth is almost entirely thrown out of the window. It is possible; but, the levels (which were made by Arkane) are far more open with enemies able to see one another and opportunities for takedowns incredibly rare. The new cloak ability does help slightly, but I never found it worth the hassle, as my attempts almost always ended up in enemies spotting me and a fight breaking out. That isn’t the way to play either, Youngblood shines when engaging in open combat for the reasons mentioned above.

This is all encased within a progression system based around light-RPG elements with you levelling up as you gain XP from killing Nazis and completing missions. Gaining levels allows you to buy more than 40 abilities, which are mostly stat upgrades like more health and armor or passive buffs like being able to move faster with heavy weapons. There are a few active abilities such as Crush and the aforementioned cloak. The former allows you to break certain metal walls to access new areas and loot caches.

Yes, you heard that right. This game has loot you can pick up beyond health and armor. Youngblood adds a new currency called Coins that allows you to purchase weapon upgrades and new skins for those weapons and your Power Suit. These coins are littered throughout the environment, just resting on shelves and boxes or inside caches which can be opened. Some of those caches are locked and require you to first find a Floppy Disk and decode it on a computer to discover the code to open it. Which can get a little tiresome, as you have to remember the location of the computer as you are exploring.

I found that this additional focus on exploring the environment complimented the arcadey-feel and combat focus of Youngblood really well. I loved exploring every nook and cranny of the environments that Arkane had created, not only because they were interesting and varied across the five explorable districts of Paris, but gorgeous to look at as well.

Skins and a few XP boosters can be brought with microtransactions; however, they are not invasive at all as I always had plenty of coins and the skins just change the color of your weapon and suit and add a slight shine to it. There are no fancy camos or animated patterns.

Wolfenstein: Youngblood ups its focus on combat even more by allowing you to play with a friend, who will take control of the other sister. Playing with another person doubles the carnage and enjoyment of combat by having you face more Nazis and pummel them with even more bullets. All coins, ammo, and weapons are client-based meaning that if you pick up a stash of ten coins, your friend will have to pick it up to add it to their own inventory. Loot isn’t shared which I presume was done to keep you and your buddy fighting alongside one another, rather than exploring different sections of the map. However, shared loot, especially for coins would have been nice to save a lot of backtracking.

I played through about a third of the seven-to-eight hour main story with our Senior Editor, Tim Nunes, and both of us had a blast just mindlessly shooting things. Wolfenstein: Youngblood really feels like a “Switch your brain off” type of game. It doesn’t ask you to think too hard or listen to an abundance of dialogue; it only asks you to shoot every Nazi you see and it is a blast to do so Solo or with a friend.

If you do opt to play Solo the A.I. works well enough. It’s level scales with yours and will always output the same amount of damage you are able to do. When down but not dead, you can call for help to signal the A.I. to come over to you and revive you, which it will always do forgetting what it was previously doing. However, the A.I. will sometimes just stand out in the open and get shot, which can be a bit of a pain as you are forced to go and revive them, as lives are shared between both sisters.

Wolfenstein: Youngblood is a pretty big departure for the series. It places its bets on the dynamic and thrilling combat changes and hopes that makes up for its lack of a meaningful narrative and compelling side characters. And, that bet was worth it. The gameplay loop of killing Nazis and looting the environments you revisit over and over during the main story, numerous side quests, daily and weekly challenges is incredibly gratifying as it all contributes to you being able to do more damage, perform new abilities, and survive longer.

Whilst the entire package isn’t as good as The New Order, Wolfenstein: Youngblood is the most fun I have had with a Wolfenstein game. The experience is brief enough that the combat doesn’t become stale, yet long enough to allow Soph, Jess, and Abby’s personalities to shine and make me want to see more of them in the future. I wish there was a meatier story here, but I was more than happy to have a new Wolfenstein game to play.

Those looking to experience the combat of the series before Wolfenstein 3 will have more than enough to sink their teeth into. But, if you were looking for a progression of the overall Wolfenstein narrative and a new batch of characters to fall in love with, you aren’t going to find it in Youngblood.

Wolfenstein: Youngblood is an excellent stopgap before the inevitable Wolfenstein 3. You can dip your toes back into the world and the new combat changes come together to create the best combat in the series. Light RPG elements help add a new flavour to the franchise as well. Jess and Soph are the standout stars of Youngblood and help lift up the underwhelming and largely inconsequential main narrative. The overall package isn't as good as The New Order, but Youngblood is a silly, fun, and gory romp worth experiencing.