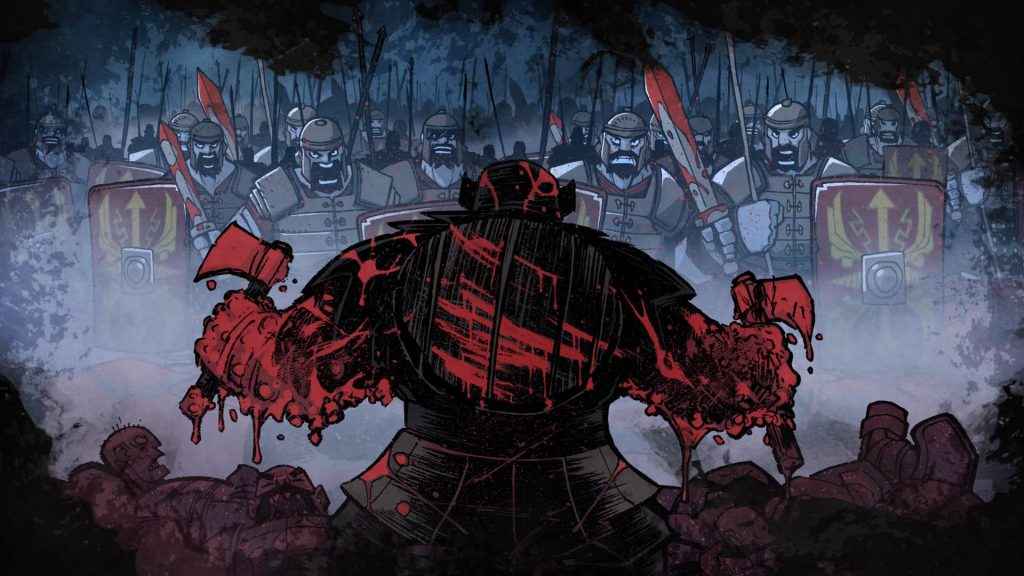 The side scrolling brawler, as popularised and pioneered by such classics as Golden Axe, Streets of Rage and Final Fight, have always proved to be satisfying affairs; that glorious feedback loop of smashing a goon into the floor before wandering off a little down the road and doing the same thing again is one that has endured for decades. The thing is, despite the fact that such evergreen thrills haven't lost their luster, the traditional side-scrolling brawler has (with the notable exception of the excellent Dragon's Crown) rarely sought to amount to anything more than that; a dispenser of satisfying moments that simply occur one after another in predictable fashion. Enter then Wulverblade, a genre effort from British developer Fully Illustrated which goes to great lengths to show that side-scrolling brawlers can be much more than they initially appear.

Set against the chaotic backdrop of the British invasion by the Roman Ninth Legion in 120 A.D., Wulverblade plonks players into the ragged boots of one of three siblings belonging to the Northern Tribes who must stab, smash, dismember and decapitate their way to freedom. Naturally, each of the characters fall into the typical categories that one might expect from a scrolling brawler too; the sword and shield wielding Caradoc is the all-rounder, the hulking giant Brennus does the most damage but is the slowest, while Guinevere is the fastest of the trio, but also the weakest.

Let's not beat about the bush here, the developer is clearly an avid student of the side scrolling genre and in Wulverblade it really shows as the game staunchly embraces many of the recognisable conventions that have defined those earlier aforementioned classics. So for the uninitiated, in Wulverblade, you and up to one other human player will be spending your time proceeding through each of the game's eight maps, carving up foes, picking up score boosting loot, collecting powerful weapons and vanquishing impossibly proportioned bosses. So far, so Golden Axe then.

There are however, a number of wrinkles that developer Fully Illustrated has woven into the fabric of Wulverblade's design to help separate it from both genre luminaries and contemporaries alike. The first of these is the rage mechanic which is essential to getting through the game because without it, you'll likely end up face down on the ground in a world where everything is red and tastes of blood. Simply put, being enraged makes you both attack much faster and become totally resistant to damage, however the effect only stays active for a very limited time and so it must employed frugally in order to be leveraged to its fullest effect. Luckily, rage can be built up by killing enemies, drinking potions and eating mushrooms, so there are plenty of opportunities to keep the ol' anger bar topped up.

You'll be needing to make the most of your rage too, as the various Roman soldiers and enemy allied tribalists that you'll come across in Wulverblade present a varied and challenging gallery of rogues for you to tangle with. From the basic sword wielding tribesman, to Roman archers, stealthy assassins and fully armoured centurions whose towering shields act as an effective bulwark to most of your attacks, each of the enemies you'll scrap with in Wulverblade demand their own sort of micro-stratagem in order for you to emerge from each encounter unscathed. It's a welcome change certainly to have to think about your attacks in an affair like this, rather than just absentmindedly bulldozing through your opponents as Wulverblade's genre peers would otherwise have you do.

Another trick available to our painted warriors is the ability to call a pack of wolves to savage their enemies. Acting as a screen clearing smart bomb of sorts (and thusly broadly similar to how the potion mechanic works in Golden Axe, or the ‘special strike' functions in Streets of Rage), these slavering beasts will leap into action and outright kill most enemies. As a result, their jugular tearing talents are best used when you find yourself getting overwhelmed by enemies since your furry friends can only be summoned once per level.

Elsewhere, there are plenty of opportunities for violent environmental kills too. Though Wulverblade lacks the bottomless pits that so often act as a convenient dumping ground for troublesome enemies in similar games from the past, it more than makes up for it by allowing players to knock enemies back onto wooden spikes or into a nearby fire for a satisfyingly quick kill.

And speaking of kills, if you haven't guessed already, combat in Wulverblade is both steeped in viscera and grim satisfaction; you can lop off arms, heads and legs, and rather than such grim spectacle serving merely as added visual flair, those dearly departed limbs and body parts can be picked up and thrown at oncoming enemies for a burst of extra damage. Ultimately then, the creative latitude for violence is wonderfully substantial (especially in the game-changing, legend embracing final act) and as such, being able to off your adversaries in any number of ways keeps Wulverblade feeling fresh rather than repetitious as less accomplished side scrolling brawlers so often do.

In truth, the resoundingly robust genre mechanics are just one side of the coin when it comes to Wulverblade's appeal. More than just happenstance, the historical setting that has been chosen for Wulverblade was done so deliberately on the part of the game's creative director, Michael Heald. You see, Michael is a bit of history buff when it comes to all things to do with British ancient history and spent some six(!) years prior to the release of Wulverblade, painstakingly researching the people, places and events that shaped that period of history when Roman boots landed on British shores many years after Julius Caesar’s initial ill-fated attempt.

From within Wulverblade itself this fantastic attention to detail manifests itself not just in the levels, friends and foes that you'll come across throughout its duration, but also in the numerous notes and diaries that can be found scattered around each stage, with each one providing more detail to the story, additional background to the characters and fascinating historical facts on the areas and events of the era. Building further upon this, there are also secret areas that you can discover too, with each containing bountiful loot and of course, additional historical facts pertinent to the area you find yourself in, while slickly produced videos can be watched in-between levels with each one detailing the various real-life locations that Heald made many a painful trek to reach for his research.

A real passion project and labour of love, the sheer amount of research and craft that has gone into the era that Wulverblade depicts is frequently breathtaking. From the marching formations and recreational habits of Roman legionaries to the forts, houses and structures that they built which can still be found in the English countryside today, Wulverblade is steeped in a sense of history and place that no other side scrolling battler can presently lay claim to.

Perhaps in the hands of a less capable creative, the multitude of facts and historical exposition contained with Wulverblade would come across as uninteresting, lifeless and worse still, act as a real detriment to the game's otherwise blistering pace. As it is however, Heald's exuberant and enthusiastic writing (especially his annotations) succeeds in drawing you in and perhaps better still, actually kindles your own curiosity to pursue the subject matter outside of his creation.

Another, more obvious aspect to Wulverblade's appeal is just how starkly attractive the entire experience is. With its massive detailed character sprites that each possess their own smooth and flourish steeped animations, through to the beautifully detailed environments that wield color and detail with equal aplomb, Wulverblade confidently stakes it claim as one of the best looking side-scrolling brawlers on the market.

No aesthetic commentary is complete however without a mention of the eye-opening cutscenes which link up the various levels and acts of Wulverblade's story. Brought to such vivid life by talented artist Jon Sommariva, these gorgeously framed interludes are so rich in flair and style that they appear to have leapt from the pages of a graphic novel and nestled onto your screen, serving to yet further underscore the premium polish that has been applied to Wulverblade.

As it is, the only real shortcomings that Wulverblade really has is that it ends and the variety of additional modes leaves a little to be desired. Though the game is a riot to play cooperatively with friend and though some additional longevity is provided by the old school arcade mode (three lives and three continues), arena modes and the need to hunt out every secret across its eight levels, extra story based content would still be welcome even if such additions pushed up Wulverblade's modest budget price point.

Horrendously entertaining, boundlessly violent and with one eye on ancient history, Wulverblade provides an exceptionally thoughtful and enticing roadmap for the growth of the side-scrolling brawler. Pick up your controller and prepare for war; the North beckons.