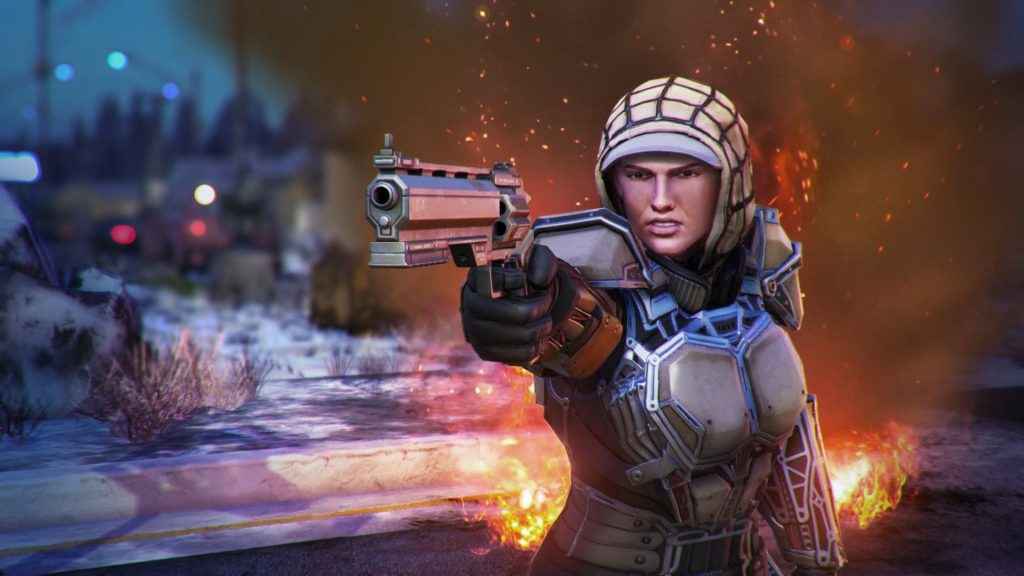 Remember that barren period at the start of the PS4's lifecycle? You know it. It's where the great indie whinge began, and folk started asking the eternal question of when Knack was going to be on Plus. That first year found me diving between old and new gen fairly consistently, catching up on the last dregs of the PS3's glorious winter whilst sampling the brief nuggets of new that showed up on PS4.

Mainly though, I was playing XCOM: Enemy Within a lot because lordy, that's a hell of a game. Ever since I longed for a sequel for the current gen, had hopes briefly raised, dashed, and raised again when XCOM 2 was teased, then announced as a PC-exclusive (which irony of ironies for a PC exclusive, ran terribly at launch), then finally revealed to be headed to consoles after all just six or so months after said PC release. Was the wait worth it? Oh very much so, but not without some caveats.

For the uninitiated, XCOM is the rebooted version of the original Julian Gollop series UFO/X-COM, a turn-based tactical series that sees you command an elite unit of soldiers in a military program known as XCOM against an alien invasion. This sees you managing the guys n' gals on the ground, negotiating with countries for support, as well as the production of upgrades to weapons, armor, and gadgets that will aid you in the near-thankless task of keeping the alien menace at bay.

And it is near-thankless because despite your best efforts, XCOM, and especially XCOM 2, loves nothing more than to pat you on the head for a good job before slamming it onto a marble floor and robbing you. What's remarkable is that you'll get right back up, cancel your cards, and do it all over again for another pat on the head. You see, while XCOM 2 is a punishing game, it's a mostly fair one, and besting it, no matter how insignificant your victory may be in the long run, is an unrelenting joy.

Even the lore carried over from Enemy Unknown and Enemy Within paints a gloomy picture of failure as it ignores the previously established ending completely and retcons it to end around the point you lost a campaign and Earth succumbed to the invaders. Now twenty years after XCOM failed, man and xeno live in perfect harmony (read: shady and sinister), but XCOM lives on as a resistance force, constantly on the move and working in the shadows. Basically speaking, your role from Enemy Unknown/Within has been reversed.

You are the outsiders, you are the ones outnumbered and underpowered. This plays into how you operate now as well, with many missions having you slinking around a level, trying to avoid detection until you can execute the perfect ambush or smash n' grab, while others pit you against a limited number of turns before something dreadful happens, ensuring you are on edge as you deliberate whether to edge ahead sensibly, but slowly, or push forward a few extra tiles and risk being left out in the open and vulnerable. One wrong move usually ends up triggering a complete collapse of the tactical structure, and the extinguishing of your soldier's lives. As such, each decision in XCOM 2 has to be considered far more than in previous games.

It's advisable to do so because the alien forces, known now as Advent, are a very different, very dangerous new beast this time around, subverting and rejigging known enemy types from the previous games, which will catch fans of Enemy Unknown/Within off guard more than once. The basic Sectoid, for instance, has now been fused with human D.N.A. to become taller, more aggressive, and not without a few new mind-manipulating tricks such as reanimating the dead. There are similar upgrades for the gigantic pain in the arse Sectopod, the thuggish Muton, and somehow, developer Firaxis even found a way to make players dread the bloody Chrysalids even more.

The aliens are joined by the genetically modified human Advent soldiers, who show up in various classes, including Officers that are best to get rid off quickly as they organize the more limited grunts. With such a large roster of enemy types, tactical-thinking gains an extra level. You just about get wise to one foes patterns by the time another is introduced, keeping you on your toes and often keeping you stocked up with toe tags as well. It's not like XCOM 2 ever gets easy, but it does provide a continuous learning experience as you go.

It can feel a touch overwhelming at times, even with the sedate pace a turn-based game provides, XCOM 2 is masterful in the way it manages to keep up intensity and panic, not just in missions, but in maintaining and building up XCOM H.Q. (a modified alien ship that travels the globe this time around), and in dealing with the numerous objectives and crises found on the world map.

You never quite have the time to do all of it, and that can be more stress-inducing for completionists. Decisions have to be made that benefit your overall mission, but letting the aliens advance their anti-XCOM measure, called Project Avatar, is a big no-no (game over basically if they finish it, represented by a segmented red bar that fills up periodically), so you must halt progress as long as possible while you try to build up a squad worthy of taking down Advent.

To do that means getting research, building, and engineering done in your H.Q. that tools you up the best way, but you also need to use these resources to launch assaults on enemy bases that prevent the Project Avatar meter advancing.

Simple enough, right? Yet the world map throws up obstacles such as alien attacks on civilian retreats, lucrative supply drops and rescue missions that can boost you to a degree, but take valuable days away from your overall goal, and most devious of all, Dark Events. Dark Events are, what I lovingly dubbed, bastard cards. Every now and then the world map throws up three possible scenarios based on your negligence of certain areas. You will usually get a couple to attempt a counter move on at once, but you can only deal with one of those events, meaning you'll be hit with a penalty of some kind.

It ranges from more alert enemy forces to a cut in precious supplies, to the opposing force getting poison-tipped ammo and so many things beyond. It's an addition that brings XCOM 2 closer to a board game style (which is a pleasant thing by the way), and really peps up the challenge level considerably.

So essentially, XCOM 2 becomes a strategy game on three fronts. The politics of the world map, the tactical action of procedurally-generated missions, and the upkeep and development of XCOM's base. That trio of modes rolled into one makes XCOM 2 feel much fresher and more intense than its predecessor, the reversal of roles with you striking from the shadows instead of crashing through the front door certainly goes a long way to making that work, but it’s the constant pressure of juggling responsibilities that makes XCOM 2 such a satisfying challenge to face.

So it's a crying shame that all my wholehearted delight over what could well be my favorite game of the year is marred by some really major bugbears that stifle Firaxis' vision like an Advent Viper soldier.

XCOM 2 Review: XCOM Gonna Give It To Ya

First, and least troublesome of the issues is the frame rate. It was choppy on PS3 with Enemy Unknown, but it did little to hamper enjoyment personally, it's almost identical here in terms of why it pops up, and sure it is disappointing, but I can live with that. The second problem comes in the form of some weird texture glitching and pop up, but again, it is a rare, if annoying aside. The gripe that really damages XCOM 2's reputation right now is the loading times.

The load times stretch anywhere from sixty seconds to four minutes, even if you're just reloading a save from moments before it takes a couple of minutes. Now some of this is disguised well with interior shots of your squad aboard the dropship pre and post-mission, and these are greatly effective at portraying the elation, devastation, and fatigue of your men and women of honor, but it's not enough to stop you noticing just how long you are waiting. Firaxis may well patch this to become more agreeable, but so far, it's a massive minus point on an otherwise exemplary game.

XCOM 2 Review: Like a Nice Coffee With a Scorpion Swimming in It

XCOM 2 is absolutely splendid on so many levels. It's a tough challenge, but it is not without fairness and learning. The way the core ideals of modern XCOM have been expanded, modified and revitalized is incredibly smart, and slipping into the world of XCOM again feels both warmly comfortable and brutally intimidating, like a nice mug of coffee with a scorpion swimming in it. This just makes the issues it does have all the more frustrating because this is a game touching greatness but is anchored by some irritating, yet fixable problems.

XCOM 2’s PS4 port is hobbled by some turgid technical issues, but it’s a testament to how magnificent a game it is that it still rises above them. Outstanding, brutally challenging and endlessly enjoyable, XCOM 2 is a legitimate triumph.