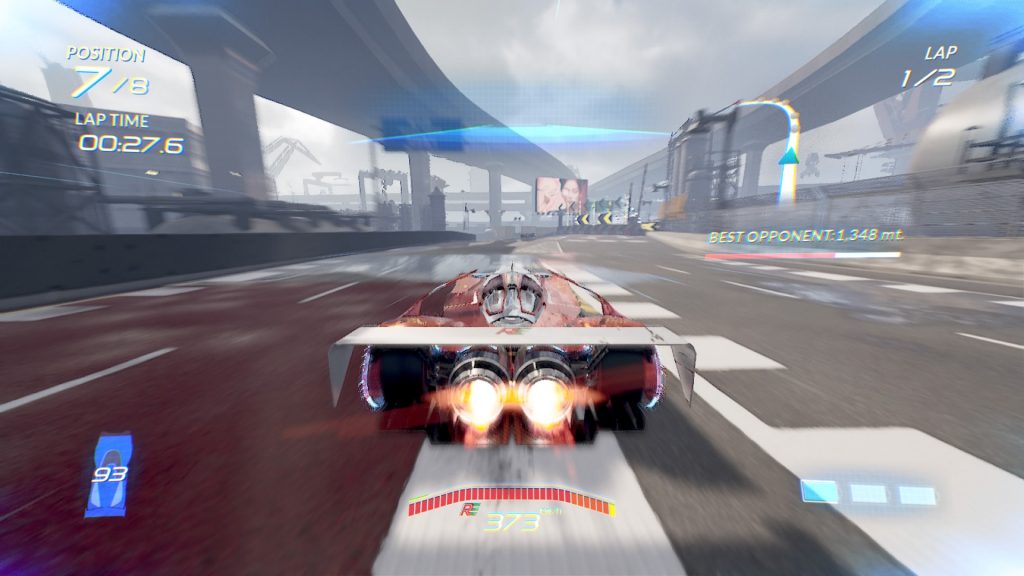 At first glance Xenon Racer seems like it follows the digital skidmarks of other futuristic racers such as Rollcage, Extreme G, and of course Wipeout, but despite the Blade Runner-esque aesthetics, it actually has more in common with the PlayStation classic Ridge Racer.

Italian indie-developer 3DClouds released their first title in 2017, the vibrant and fun kart racer All-Star Fruit Racing. This, their second release, substitutes the psychedelic toy-town tracks for sleek high-rise cityscapes from the year 2030 populated by a host of electric race cars, whose stunning designs are reminiscent of Italian concept designers Bertone.

On booting up, the menu offers a single player championship, a (rare and hugely welcome) split screen option, online racing, quick race and a garage where you can upgrade and beautify your vehicles as you unlock them.

The championship option seems like a good place to start, with various race events accessible through a branching system. A handy tutorial acquaints one with the basics, basic being the operative word as it’s apparent from the off that this is an old skool arcade racer wearing a shiny new pair of space trousers.

The main crux of the races involve clawing your way through the pack of seven other AI cars over 3 laps, with most tracks adhering to a normal street circuit layout and length. There are some eliminator and time trial races sprinkled along the way, and the car class soon switches from Normal to Performance, with the difficulty level ramping up at the same time.

After you pull away on the first race, it comes as a bit of a shock that steering cleanly around most corners is problematic. This problem can be alleviated by drifting, a tap of the brake/accelerator sending the back end out and the front end in the right direction. This becomes an essential part of your driving style, and once mastered, it gives the same satisfaction gleaned from Ridge Racer all those moons ago.

The learning curve is harsh, and you’ll spend the first bunch of races grinding against the sides of the track until your car sustains 100% damage and you reset a long way behind the competitors. Persevere and you’ll start to get into the swing of anticipating the corners with beautiful smooth drifts, boosting your ERS batteries at the same time allowing you a scenery-blurring boost on each of the three batteries. Your ERS can also be charged by running over boost pads on the tracks.

Once you get the feel for the twitchy arcade handling, you realise that each car does handle quite differently, with various upgrades unlocking as the championship progresses. There may not be a whole lot to do other than accelerate, steer/drift and boost (you’ll rarely use the brake), but it won’t matter as the sense of speed is mesmerisingly compulsive.

The visuals in the main are pretty brilliant, more so considering the budgetary limitations of a small indie developer. 3DClouds in Milan have done wonders in producing such a graphically impressive racer, although there are occasions when tracks look cheap and last-gen and no doubt with a bit more cash, these and some of the basic front-end presentation could have been improved. The 30fps achieved on a normal PS4 was perfectly adequate in representing a frightening sense of speed, so any PS4 Pro owners out there will be in for a treat with 60fps available for them.

The large range of international circuits unlock during the single player career, with visits to Boston, Shanghai, Tokyo, Dubai, Canada and the wonderful Cote D’Azur along the way. Each track has the option to be played during the day (sunny/cloudy) or at night and they’re well worth unlocking so you can host races online.

Online races were somewhat thin on the ground, but with some patience, I managed some great races which were lag free and, with the presence of AI racers on track, didn’t seem sparse despite the dearth of players.

Drifting into the 21st century

Not only does Xenon Racer scratch an itch left by a Ridge Racer-shaped hole (enough already with these mixed metaphors), it slots in nicely with the roster of PS4 racing games. There’s nothing new here other than the shiny presentation, but a simple pedal to the metal arcade racer is a refreshing change to the simulations and weapon-based racers already out there.

The cornering will be the main sticking point for some, hence some scathing reviews where the reviewers clearly had problems mastering the controls. For racing fans, I’d recommend sticking at it until you get in the zone as it’s a deeply satisfying feeling when you can lap cleanly at eye-watering speeds around the circuits.

Xenon Racer was developed by 3DCLouds and published by Soedesco and is available from March 26th 2019 via the PS Store.

An old skool arcade racer wearing a brand new pair of breeches - get past the tough learning curve and get into the zone and you'll be a happy futuristic drifter.