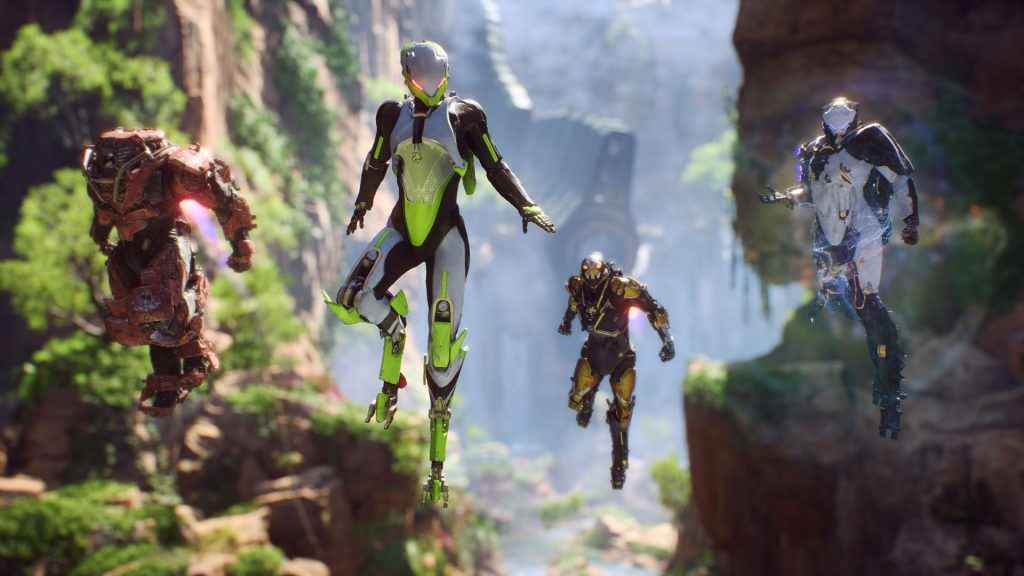 Anthem at E3 2018 was, without a doubt, the highlight of EA's largely lacklustre showcase.

As BioWare general manager Casey Hudson took to the stage, flanked by lead writer Cathleen Rootstaert and executive producer Mark Darrah, I think it's fair to say most Mass Effect and Dragon Age fans in attendance and watching online were eager to learn more about this intriguing mix of narrative-driven RPG and Destiny-style MMO shooter. And, on the whole, they didn't disappoint.

During the 30-odd minute presentation, the trio provided plenty of tantalising details on everything from the setting and character classes, to microtransactions and the potential for post-release expansions.

Everything Rootstaert said about the world building and the plot of Anthem, specifically how they're incorporated into the framework of a shared-world shooter, sounded extremely promising.

The way the hub world - known as Fort Tarsis - is separate for each player, with a melange of NPCs serving as both quest-givers and set dressing to make up for the lack of other players, is a great idea; helping BioWare live up to its promise that, despite being a primarily cooperative gameplay experience, each and every player will feel their character and experiences are at the heart of the game. “Our world, my story” as Darrah put it.

Similarly, RootStaert's brief rundown of Anthem's rich setting left me keen to learn more. About the player's role as a ‘Freelancer' uniquely skilled to pilot the game's quartet of Javelin exosuits, the exact nature of Anthem's beautiful world and the mutated flora and fauna that calls it home, the dynamic environments, the form the proposed future story content could take, and the identity and motivations of Anthem's antagonists: The Dominion.

In fact, when combined with GameInformer's massive info blowout, I'm confident Anthem will be every bit as politically, socially, and culturally rich as Mass Effect and Dragon Age when it release on 22nd February. Anthem Has Some Negatives

As someone who absolutely adores BioWare's traditional single-player titles, I have to say, not everything we were told was all positive.

I was far from enthusiastic when BioWare revealed that, while it is possible to play the entire game solo, the difficulty inherent in this approach would be much higher due to the absence of AI-controlled companions. The only way to fill a squad in Anthem is with other, human players.

Not that I was surprised by this news. In the intervening months since the initial reveal, BioWare has made it abundantly clear Anthem is closer in style to Destiny than any of its previous titles.

The problem is, not everyone is lucky enough to have a group of friends who can be relied upon to stick together over the weeks, months, even years it'll take to experience everything the game has to offer. Yes, there's matchmaking and, as such, there should be plenty of like-minded individuals stuck in the same boat. However, we all know how rife the gaming community is with obnoxious, irascible guys and girls who seem to think the relative anonymity afforded by voice chat gives them the right to launch a stream of invective at anyone who doesn't perform to their lofty standards.

So, there's a reasonable chance you'll find yourself lumped together with at least one profoundly unpleasant troll if you're forced to rely on matchmaking for the majority of your time with Anthem.

Moreover, while I'm certainly excited about the prospect of ongoing support in the form of numerous story expansions in theory, the question remains: how is BioWare going to publish this additional content? Most likely, it'll be via various Destiny-esque season passes rather than free updates or an ongoing subscription a la World of Warcraft.

But if that is the case, this will inevitably lead to a fractured player base, split between those that can afford to enjoy each new chunk of story as and when they drop, and those that can't. The latter forced to watch in envy as their fellow players delve ever deeper into Anthem's fascinating sci-fi world. Much More To Learn About Anthem

All the same, it'd be foolish to form a firm judgement at this stage. There's still plenty we don't know about Anthem's story, mechanics, systems, and release model - hell, at the time of writing, we don't even know what the Storm and Interceptor classes do.

Besides, like I said earlier, aside from the emphasis on co-op and potential for expensive, player-dividing season passes, what we saw of Anthem at E3 2018 looks pretty damn promising.