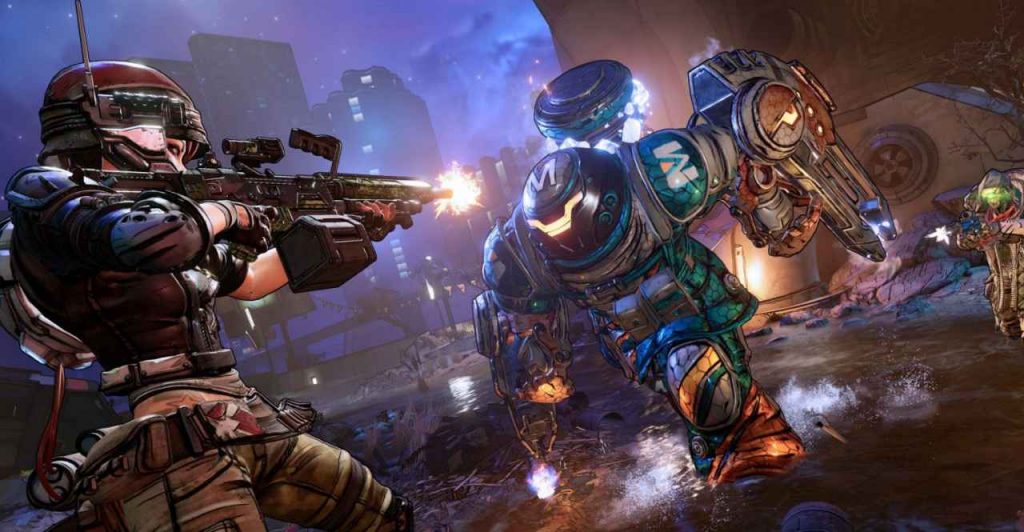 The Borderlands 3 Gameplay Reveal Live Stream has just concluded and we got a nice, chunky look at Borderlands 3 for the first time. There was a lot shown off, meaning you likely missed a lot. Luckily, we have compiled every single detail worth noting from the stream in this article.

A gameplay trailer has also been released which you can find at the bottom of the article.

Borderlands 3 is running in Unreal Engine 4 and the gameplay shown off was from the beginning of the game. Borderlands 3 will once again kick off with an introduction from Claptrap – A brand new cult has appeared on Pandora; The Children of the Vault (CoV) are a mysterious group with even more mysterious leaders who must be taken down.

Borderlands 3 gives us four new Vault Hunters: Moze The Gunner, F4AK the Beastmaster, Zane the Operative, and Amara the Siren. In the gameplay video today, Amara was being shown off primarily.

The Quick Change Station has returned and now it allows you to customize the heads, skins, colors, emotes, and ECHO Skins. It can also allow you to ReSpec your skill tree, too. The writing and dialogue aim to match that of the previous Borderlands games, both in its irreverence and how genuine it is depending on the context; so expect a fair amount of tonal shifting.

A new feature was shown off shortly after. You can now slide whilst sprinting and mantle to ledges, allowing you to reach new areas. Weapons now have multiple firing modes. In the demo, we got a look at the Vladof pistol switching from semi-auto fire to a flurry of micro-missiles. Some elemental weapons can also switch element, with some heavy weapons able to switch types entirely, from mini-guns to grenade launchers for example.

The demo then takes us to Shiv, the leader of the CoV in this area. This combat sequence shows off Borderlands 1 levels of dismemberment, as well as a visual death system which was also present in the first Borderlands game. Enemies who catch fire will burn to ashes instead of dying normally, too.

As combat concludes, Lilith contacts Amara telepathically. She is currently the commander of the Crimson Raiders and then we then get a look at our first chest. Opening it grants us two different firearms; one offers superior accuracy and handling, while the other offers greater damage and a higher rate of fire.

We enter another combat sequence, this time getting a look at the destructible cover the game offers. Explosive barrels can be melee attacked into enemies and oil and water reacts with certain elements (oil will catch fire and water will conduct electricity). We also see the return of the ground-pound ability from Borderlands: The Pre-Sequel as well.

The next fight is against the first mini-boss, Shiv himself. Prepping for the fight, Amara finds a shield in the world. Shiv is a melee boss, meaning that the key to defeating him is to dodge attacks and unload a bunch of damage onto him. Larger bosses in the full game will have multiple phases each with a set of mechanics to be learned and overcome and will require more coordination to defeat.

Upon defeating Shiv and instantly equipping his loot we head upstairs to rescue Claptrap. Upon release from the crane, Claptrap gets knocked out pretty much right away. We then see that NPC’s can revive you and you can revive them in turn. Lilith arrives and welcomes Amara to the Crimson Raiders and from here we now learn that she is looking to acquire a key that will allow her to open vaults on other worlds.

Finally, the demonstration concludes with a colossal fight alongside Lilith. We get a glimpse at her Firehawking explosively into her enemies, sending various body parts flying across the map.

We were then treated to a co-op demonstration.

The hunt for the key Lilith wants will eventually take you the CoV Holy Recruitment Center while a fearsome bandit boss named Mouthpiece broadcasts the CoV propaganda to all of Pandora. Randy and Paul dive into Amara’s Skill Trees. A new feature for Borderlands 3 are action skills. Each Vault Hunter has three different Action Skills to choose from. You can choose these once you hit Level 3. You can only equip one at a time, although Zane can equip two at the cost of grenades as an option.

Amara’s three Action Skills are the AOE-based Phaseslam, Phasegrip, and Phasecast. Progressing further in these skill trees will now unlock passive skills as well as augments and modifiers for them to diversify them further. For example, Phaseslam was modified in the demonstration with an electric element – making it an especially useful attack against robotic foes.

From there, we get our first look at the drop-in co-op functionality. A level 25, player-controlled Zane joins in on the fight and it’s here that we were given some details on how the loot is balanced in co-op. Everyone receives their own stream of loot in Borderlands 3, and it’s being dubbed ‘loot-instancing’. Higher and lower level players can still fight alongside each other and be effective, receiving their own loot. As a note, these features are optional and you can return to a classic Borderlands co-op experience should you so wish.

Next, Zane’s Action Skills are shown off. Digiclone is an ability that allows him to make a copy of himself to confuse and distract enemies. He can swap places with that clone multiple times as well. The Sentinel skill meanwhile, calls in an autonomous combat drone that can be modified with the ability to freeze, attack, weaken, or bomb enemies. Finally, the Barrier skill calls up a defensive energy shield that deflects enemy fire and provides unique bonuses for Zane and his allies when they interact with the barrier.

Speaking of guns, some of the Tediore manufactured guns have the ability to walk around on legs, while some can also bounce around and act like grenades, whilst others will split into rockets. Vending Machines will also make a return in Borderlands 3, allowing you to auto-refill ammo easily.

Of particular note is the fact that Borderlands 3 includes the most boss fights in any Borderlands game and Mouthpiece is one of them. His arsenal includes a shield and the ability to damage the Vault Hunters with the speakers located around the environment. Upon his death, Mouthpiece drops a CoV firearm that yields Borderlands 3 next interesting feature – all CoV weapons do not need to be reloaded; instead, they overheat and you have to wait for them to cool down.

Sanctuary 3 is Borderlands 3’s new central hub location while the ship is where you can collect your lost loot from your trips out on Pandora. Here, you can hang up your favorite guns in your quarters, open Gold Key Chests, buy storage deck upgrades, gamble in Moxxi’s bar, interact with characters like Sir Hammerlock and Ellie, purchase new wears, and jump into light speed to different planets.

In short, Borderlands 3 looks to be absolutely stuffed for players to do (and shoot).

That covers everything Gearbox showed off at their Borderlands 3 Gameplay Reveal. You can catch up and watch the stream for yourself over on our livestream page.

Thanks to 2K for inviting us to the Borderlands 3 Gameplay Reveal in LA. Travel and Accommodation were paid for by 2K.