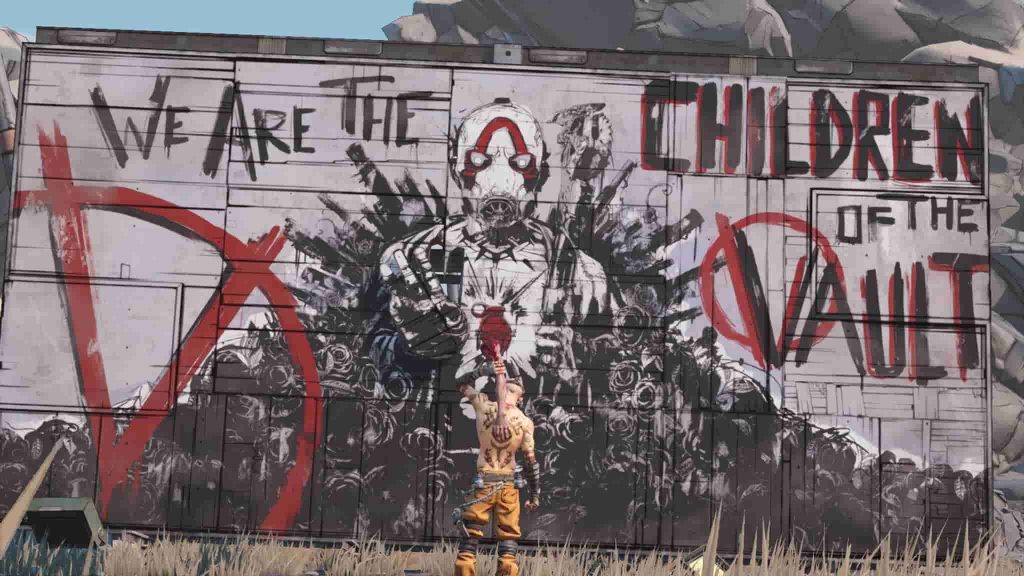 Like all the games in the series that have preceded it, Borderlands 3 is a loot shooter with RPG style progression aspirations that trades on blunt force satire to elicit chuckles and laughs. The thing is, Borderlands brand of comedy was hit and miss even a decade ago when the first game released, and now it’s certainly no exaggeration to say the humor is more miss than hit – akin to a crusty relative that recycles the same cringe jokes over and over.

From riffs on millennial ‘caffeine culture’ that include a desperately unfunny Barista Bot that insists on organic produce and reusable cups, to rummaging around the landscape for a pair of underwear and Borderlands perennial robotic pain in the rear, Claptrap, being incandescently annoying to the point of distraction (even when you’re trying to build him a soulmate in a rare moment of softness), it’s clear that the Borderlands sense of humor just hasn’t aged that well at all.

The story has players once more stepping to the shoes of a Vault Hunter who must, you guessed it, reach the fabled Vault before the baddies do, which in this case are the Calypso Twins – a pair of extremely powerful assholes who.. nah, we’ll leave it at that. Suffice to say that with a fairly hefty cast of characters which spans the entirety of the Borderlands franchise (and I do mean the entirety) and some fairly interesting twists, turns and cameos, Borderlands 3 overall story arc surprised me more than I thought it would.

Another intriguing element of Borderlands 3 campaign is where the central hub takes place. No longer routed to a planet, in Borderlands 3 hub area (amusingly called Sanctuary III) is actually aboard a spaceship from where you’ll launch story missions and side missions onto a wide variety of different planets and locations. As such, Borderlands 3 feels much larger in scope than any of the games before it which, y’know, is a good thing.

Happily, faring much better than both the story and the humor that is employed within it is the gunplay which has seen a welcome improvement over previous games. Immediately apparent in this regard is how the guns feel – arguably one of the truest measures of any shooter. Simply, just about any gun in Borderlands 3 feels like a joy to handle; the satisfying rattle of a Jakobs six-shooter firing off the contents of its chamber being perfectly accompanied by the punchy and audible barrel explosion that one would expect, being one example. Heck, even the melee attack feels great now too which is saying something.

If anything, the feeling of the gunplay actually feels similar to Respawn’s Apex Legends, so snappy and rewarding are the deathly and loud wagers made in each encounter. Reinforcing that point of comparison is how player movement is handled. Again much like Apex Legends, there is a fresh focus on kinetic physicality (though not quite to the same extent, as there is no wall-running), as players can now slide effortlessly along the ground, while improved mantling and climbing abilities lends Borderlands 3 a sense of agility that the series has never really had.

When taken in tandem with the much improved gunslinging, this newfound spryness helps Borderlands 3 to confidently stake its claim as not only boasting the finest gunplay in the series to date, but also, at last, at a level that can allow it to enter peerage with some of the genre greats such as Destiny 2 and the aforementioned Respawn standout product.

Likewise, the guns that feature in Borderlands 3 are also drastically different in function depending on the manufacturer, helping to make each firearm look and feel unique. Atlas made firearms can, for example, fire homing bullets that are useful for flushing enemies out of cover, while Hyperion guns very often boast a shield effect that serves to buff your character – lending itself well to a support play style in the process.

As much improved as the gunplay is in Borderlands 3 however, it still isn’t quite as great as it should be. Annoyingly, this is down to one single, albeit surprisingly frustrating flaw relating to collision detection. Essentially, the collision detection in Borderlands 3 proves to be somewhat uneven in that you can be aiming at an enemy through a gap in a barricade, but the game doesn’t register that being a space that you can shoot through.

Or another example would be being trying to snipe an enemy over a ridge, where your aim is mere pixels above the edge of it and yet, your bullets still hit some invisible wall. Though hardly a problem during Borderlands 3 more fast and furious encounters, it can really take the steam out of its more leisurely moments when you’re stalking the enemy (especially when the failed shot alerts them by accident). A shame, then.

Back on the goodness trail, another feather that Borderlands 3 has in its colorful cap are the quartet of new Vault Hunters that Gearbox’s threequel brings into the fold – and what a varied bunch they are too. Moze is your ‘gunner’ a firearms focused class whose special ability allows her to summon the ‘Iron Bear’ a towering mech that can unleash huge devastation on her foes before its fuel reserves run out.

Amara meanwhile is the Siren of the group, capable of summoning massive ethereal arms and fists to grapple and pummel her foes into a fine red mist. Zane is your gadgets guy, an ‘operative’ that can employ all manner of traps and decoys to get the job done, whereas FL4K is an android Beastmaster that can summon all manner of, well, beasts to support him and his friends during battle. The upshot of these four misfits is that each one ascribes to a different style of play that allows players to find a protagonist that best mirrors their approach to Borderlands 3 brand of first-person loot murder.

Beyond it’s cast of characters, Borderlands 3, much like its predecessors before it, prides itself on a gameplay loop of murdering stuff, looting stuff, upgrading stuff and then rinse and repeat. It’s the same formula that has kept fans of the series feverishly engaged for a decade and in Borderlands 3, this core tenet remains as strong as ever.

In addition to the potentially billions of different gear types enabled by Borderlands procedural generated loot, which ensures that the same lootbox will never give you the same thing twice, the third game in the series honors its heritage by not only providing would be Vault Hunters with shiny gear to collect, but also with deep character progression too.

Each of the Vault Hunters have three very different skill trees which, again, emphasizes the notion that players really can make each character their own, while the inclusion of numerous weapon mods and additional unlocks all permit the sort of low-level tinkering and theorycrafting that series veterans have enjoyed for such a long time.

Though the campaign for Borderlands 3 clocks in at a hardly slim 30-35 hour completion time, it’s really in the endgame that Gearbox’s latest entry in the franchise truly shines. For a start, the Badass Rank system which was used in previous games to provide incremental persistent stat bonuses in return for completing specific challenges has been overhauled. Now known as the Guardian Rank System, rather than accruing those incremental upgrades throughout the game, you now receive them at the endgame, which to be honest makes a lot more sense since the leap in difficultly is quite something.

One of these new post campaign challenges are the ‘Circles of Slaughter’ which can be found on a number of different planets. Essentially a horde based mode, a group of players must carve/blast/explode their way through rushing legions of double hard bastards to win piles of higher quality loot. Of course there’s a neat risk/reward dynamic at play here too, since you can opt to leave with your winnings at the end of each wave, but if all players are dead then all rewards go with them too. Though hardly groundbreaking, these horde scenarios do still reliably provide hours of extra fun all the same, as you and your mates test your mettle against these elite foes.

Another part of Borderlands 3 endgame is the ‘Proving Grounds’, which is the closest the game gets to a true raid encounter. Here, once players have uncovered and deciphered secret markings across the various planets, they are tasked with defeating a range of extremely high level enemies across a number of areas in order to obtain some ridiculously powerful gear. The kicker? the whole thing must be wrapped up within 30 minutes, which means that having a group with high level gear isn’t enough – you need them to be high level players too.

Finally, once you beat Borderlands 3 for the first time, you’ll unlock ‘Mayhem Mode’ which essentially makes things tougher and introduces a number of game mods for better loot. Though not quite as essential as the Proving Grounds and Circles of Slaughter, Mayhem Mode still manages to provide even more longevity to a game which is already overflowing with it. You’re not going to get bored with Borderlands 3, let’s just say that.

A constant that has been true since that very first Borderlands title is that these games are always much more enjoyable with friends and Borderlands 3 embraces this with glee, providing frequent bellyfuls of merriment as you and up to three friends blast your way through the game, either sharing loot or making it a first come, first served situation – the latter of which seeming to be instrumental in creating hilarious high drama.

Technically, though Borderlands 3 is not on the same tier as some of the more game engine-obsessed shooters, it’s still something of a looker in its own right with much larger worlds, improved lighting and detailed character models all proving to be pleasing to the eye. Where things come slightly unstuck is in the performance side of the equation.

On the base PS4, Borderlands 3 sticks rigidly to 30FPS at 1080p and it’s a figure that while not ideal, is at least consistent and still makes the game feel eminently playable. When we come to the PS4 Pro however, there are two choices – a ‘Resolution’ mode and a ‘Performance’ mode. In the case of the former, a higher 1800p resolution is the target which, sadly, makes the framerate fall through the floor into the 15-20fps range during busy scenes in split-screen (something the developer is already aware of).

Conversely, Performance mode is the best option for PS4 Pro folks, but the framerate tends to frequently drop below 60FPS during heavy split-screen play, resulting in an experience that is very often riddled with minor stuttering. Not great then, but certainly the better of the two scenarios for PS4 Pro users and something that we hope will be resolved pretty quickly via the magic of patching.

If you expected a lot more from Borderlands 3 however, or at least something more innovative that what we have here, do feel free to take a hatchet to that score below to the tune of a point or two. For the rest of you, be happy that the Borderlands franchise appears to be in such fine fettle. As it is, I really, really enjoyed Borderlands 3; the gunplay is the most satisfying the series has ever seen, the loop of kill, loot, upgrade still doesn’t feel overexposed and the whole thing is just a great hoot to play with friends – dodgy attempts at LOLs be damned.

Borderlands 3 is out now on PS4, Xbox One and PC.

Though the humor frequently misses the mark, the much improved gunplay of Borderlands 3 and stupendously generous endgame easily wins out in the end, creating arguably the best entry in the series to date.