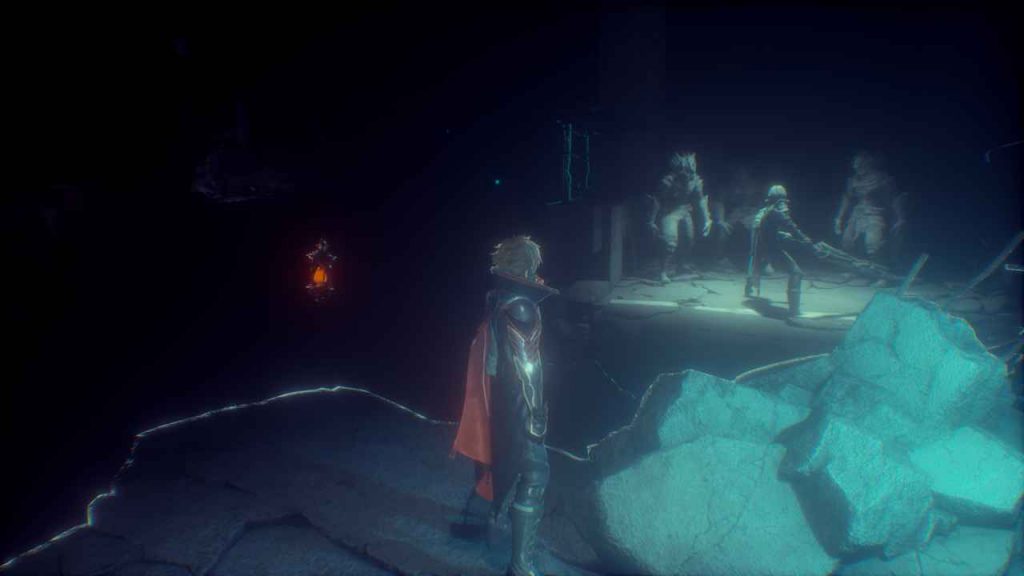 A couple of weeks ago, I had the opportunity to go hands-on with Code Vein for the first time since its delay last July. And, I came away with a lot of varied opinions about what I played, which you can check out in our hands-on impressions of the game. However, this time Bandai Namco showed off some new features that haven’t been seen yet.

Here are five new features that I discovered whilst playing Code Vein.

You Can Customise The Protagonist A Lot

The team behind Code Vein have spent a lot of time adding new ways to customise your own personal vampire. You can change the gender, hairstyle, face, eye colour and shape, skin colour, as well as add features to him/her, like face paint.

However, what really makes Code Vein’s character creator stand out is some of the unique designs and colour schemes you can equip. For example, you can alter the colour and material of different parts of clothing, such as having parts made of metal and other areas made of plaid. On top of that, you can give your own vampire some originality with unique face paint designs, ranging from small tattoos on their cheek to full shapes covering parts of their face, like a spider’s web or a sequence of cracks emerging from their eye.

This allows you to shape your character in interesting and distinctive ways, beyond what we have seen in similar titles.

We have known about Blood Codes for a while now – They act as a character class or specialisation that you can choose and switch between. Each one grants you new Gifts (abilities) to use during combat. However, something that surprised me when I played the game was just how influential they were in terms of what you are able to do.

I was expecting them to only change your character’s stats slightly, ensuring you can do everything no matter what Blood Codes you have equipped. Turns out, I was wrong – Blood Codes will drastically affect what you can do.

For example, I found the Berserker Code during my demo that was geared towards heavy, weapon-based attacks. This resulted in my health, defense, and stamina being buffed, but came at the cost of reducing my Ichor Stock (Mana) by two thirds. This change meant that I couldn’t use my Gifts very often and when I could I had to make them count in order not to waste the Ichor.

These drastic changes appear to give you a lot of freedom in terms of how you want to play Code Vein, especially when it comes to playing with other people, which leads to my next point.

Acquiring Blood Codes Takes You On A Trip

Acquiring Blood Codes doesn’t just come from stumbling upon them out in the world. Instead, the only way we currently know of how you can acquire them is by defeating bosses. Additionally, once you defeat a boss you can interact with their vestige to learn about their backstory. This is done by transporting your conscience to an area where you follow snapshots of the boss’ life and what made them turn into one of the Lost.

I walked around and watched the boss I fought, Oliver, slowly become a bloodthirsty murderer who would kill anyone for some more Blood Beads, a substitute for human blood.

The team behind Code Vein seem to be adding a new context behind who you are killing, more explicitly than other souls-like games.

Beyond Blood Codes, Code Vein has a lot of different ways you can play it. The game offers multiple different weapon types on top of the wide variety of Gifts you can unlock with each Blood Code. You also can find Consumables throughout the world that can provide temporary buffs or add to your arsenal, such as equipping throwing knives.

Therefore, if you want a game where you can truly customize your playstyle, then Code Vein is for you.

Playing With Friends Looks To Be A Lot Of Fun

The effectiveness of and variation between Blood Codes could make playing with your friends in Code Vein a lot of fun. Each of you can run Codes that compliment each other allowing you to pass benefits onto each other.

Player 1 running the Berserker code can stay up close and keep the enemy’s attention on them, whilst player 2 is running the Caster code which provides Gifts that can deal long range damage and shoot projectiles. I wouldn’t be surprised if in the full game we see Blood Codes that offer more substantial benefits, such as increasing damage at the cost of health or boosting the health of you and your partner.

Each of you can choose a specialization you want to run with, and after beating the game, play through it again experiencing a completely different playstyle.

That covers the features I noticed in my recent hands-on with the game that you may not know about. You can check out our full hands-on impressions of Code Vein right here.

Code Vein launches in 2019 for PlayStation 4.