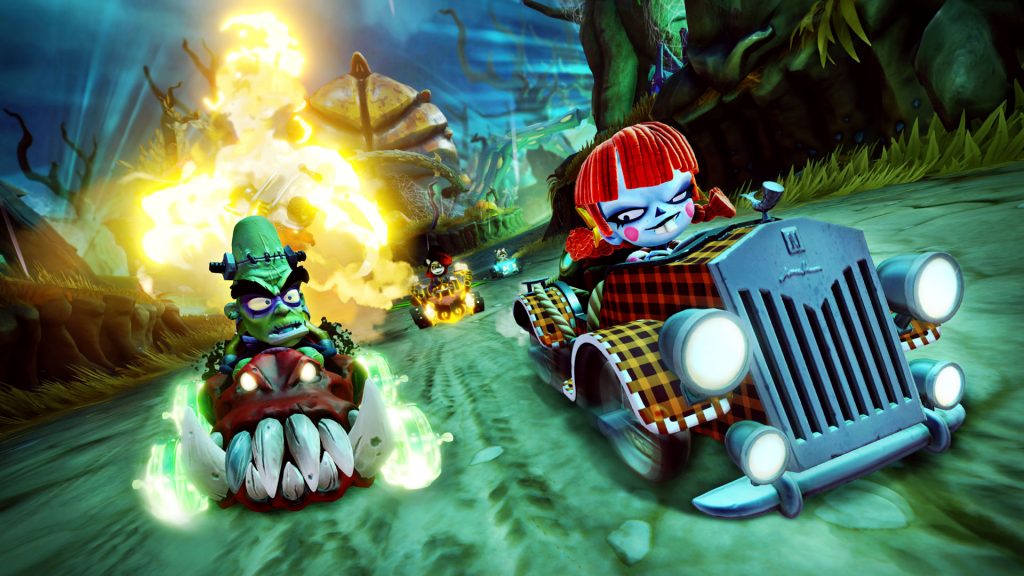 Developer Beenox has lifted the lid on the Crash Team Racing: Nitro-Fueled Spooky Grand Prix, which is set to kick off tomorrow and sees the crate-smashing marsupial’s kart racing embrace the spirit of Halloween. It’s the latest in a long line of post-release content for Crash Team Racing following the game’s launch earlier this year.

As with most new Grand Prix events, this spine-chilling edition will include a new track, new characters, fresh items to unlock, and a new challenge type.

First up is Ghost Hunt, which sees players releasing mischievous ghosts by smashing certain crates on the track. All you have to do is catch up to the speedy spirit to capture and it and lets you complete Grand Prix challenges. Meanwhile, the nefarious Nina Cortex, Dr. N. Brio, and Komodo Moe are joining Crash Team Racing with this latest Grand Prix series.

Players will also be able to race on a new track in the shape of Nina’s Nightmare. This sees players ploughing through misty crashes, eerie gardens, and twisted hallways of a haunted house, featuring various hazards such as ooze-spitting pumpkins and a spider-pumpkin.

Elsewhere, Beenox is offering up new rides in the form of the Nautilus, the Skull Rider, and the Phantom, the latter of which was inspired by the Organ Grinder from Crash Tag Team Racing.

Driving Styles have also been renamed to the following:

Those of you who fancy climbing the leaderboards will be chuffed to learn that the Championship and Nitro leaderboards are back and fully revamped for the Spooky Grand Prix. If that wasn’t enough, fresh Pit Stop items have also been added:

The Pit Stop will be stocked with tons of new items, themed perfectly for the season. Give your kart some ethereal flair with Spectral wheels and paint jobs or the spooky new stickers and decals. Then get some of your favorite characters ready for the season with wicked new skins.

Also, for those that missed them the first time around, select characters and items from the first Grand Prix, the Nitro Tour, are making their return to the Pit Stop in this Grand Prix season. Be sure to stop by to see what’s new and what has returned!