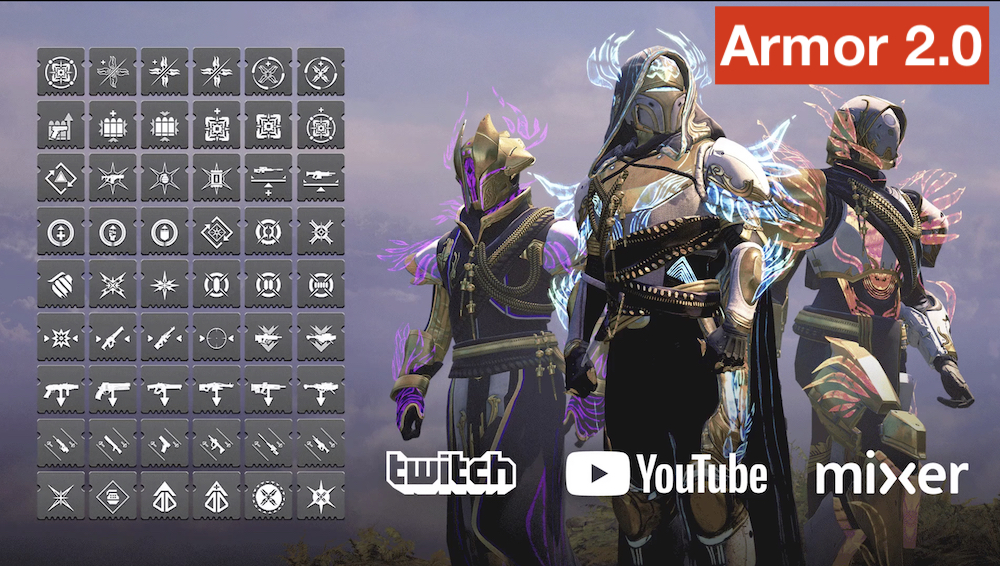 The Armor 2.0 Destiny 2 stream just ended, and we learned a great deal about the new gear options coming in Shadowkeep. A lot of the information wasn’t new, however. It was more of a detailed look at what was already announced. We will be breaking down all the information given, as well as talk about what new information is still to come between now and October 1. This is Armor 2.0.

If you are a veteran Destiny player like myself, then you remember Intellect, Discipline, and Strength. These stats decrease the cooldowns of your grenade, class ability, and super. With the launch of Destiny 2, these stats were replaced with Mobility, Resilience, and Recovery. These increase movement speed, shield strength, and health recovery. Now, we will be combining both worlds and will have six stat abilities.

These abilities will continue to function as they have in the past, although they will be altered slightly. Instead of continuing with a tier system of 10, these stats will now increase to 100. Each incremental change of 10 will bring you into or out of a tier of benefits. These benefits, in tandem with the new mod system, will give you greater control over your Guardian. As far as we know, all six of these stats will be random rolled, so a bit of grinding will still be required to get the stats you want.

Unfortunately, we are still unsure of how exactly to acquire these mods. What is clear is that once a mod is unlocked, it can be infinitely used. Mods are no longer consumables but unlockables. You will need materials to equip them, of course, but you can equip the same mod to multiple pieces of armor. This not only allows players to not be stingy with their mods but also gives them more grinding opportunities.

To equip mods, you will need to spend energy. This energy is tied to the specific piece of gear that you are equipping the mod to. The piece of gear will also be aligned to a certain archetype. This means that some mods will become locked out, or available, depending on if your gear is one of Solar, Arc, or Void. From what we can tell, the gear itself has no connection to the subclass your Guardian has equipped. However, we can almost guarantee the mods will benefit the same archetype subclass.

When you acquire a piece of Armor 2.0 gear, it will have a number tied to it. This number will determine how many mods can be attached as well as how strong those mods can be. This energy can be increased by upgrading and Masterworkering your armor. For instance, if you wanted to use two mods that cost five energy, then you will need to upgrade your armor piece to Masterwork level in order to use both of them together.

Along with using the most amount of powerful mods you can, Bungie also informed us that they have locked out certain mods if they don’t synergize well together. For instance, if one mod increases grenade cooldown but decreases melee cooldown, you won’t also be able to equip a mod that does the opposite because these mods will cancel each other out.

Another piece of information Bungie shared is that you will be able to stack mods abilities; although you can’t stack mods themselves. You won’t be able to equip three Hand Cannon reloaders together, as we previously thought in our “Why Armor 2.0 will be better than Transmogrification” article. However, even though you cant equip multiples of the same mod, you can stack effects. For example, if you have Hand Cannon Loader equipped to speed up Hand Cannon reloads, and you have a Hand Cannon in your Primary slot, then you can equip a mod that increases reload speed for Primary Weapons.

Not all of the information Bungie shared today was just about Armor 2.0. Some more information was shared on quality-of-life changes as well. We don’t have too many details, and frankly, some details don’t need any more explanation. Nevertheless, we will still touch on them, and most are very exciting.

As you can see from the image above, a lot will be changing with Shadowkeep. Some things we expected to see change, such as Power level and the newly announced Artifacts. These things weren’t talked about on stream, but more details will come at a later date.

Nevertheless, some things, like your Sparrow and Ghost, are now shown off on your inspection page. This will add even more diversity to Guardians. Even if two Guardians are running the same armor, they can be separated by their vehicles and Ghosts.

Finally, the one last thing that we didn’t expect to see is the increase to Glimmer. This in-game currency has been capped at 100,000 since the launch of Destiny 2, with fans regularly complaining it was not enough. Finally, with the launch of Shadowkeep, the cap will be increased to 250,000. This isn’t a huge jump, but it is something.

Destiny 2: Shadowkeep now launches on October 1, and we will increasingly get more information on Shadowkeep’s new features as the months go on. For now, the information we have just received will hold us over until the floodgates break and we learn everything we can about the newest expansion to Destiny.

Remember for all the information on Shadowkeep and beyond keep your eyes up to PSU, Guardian.