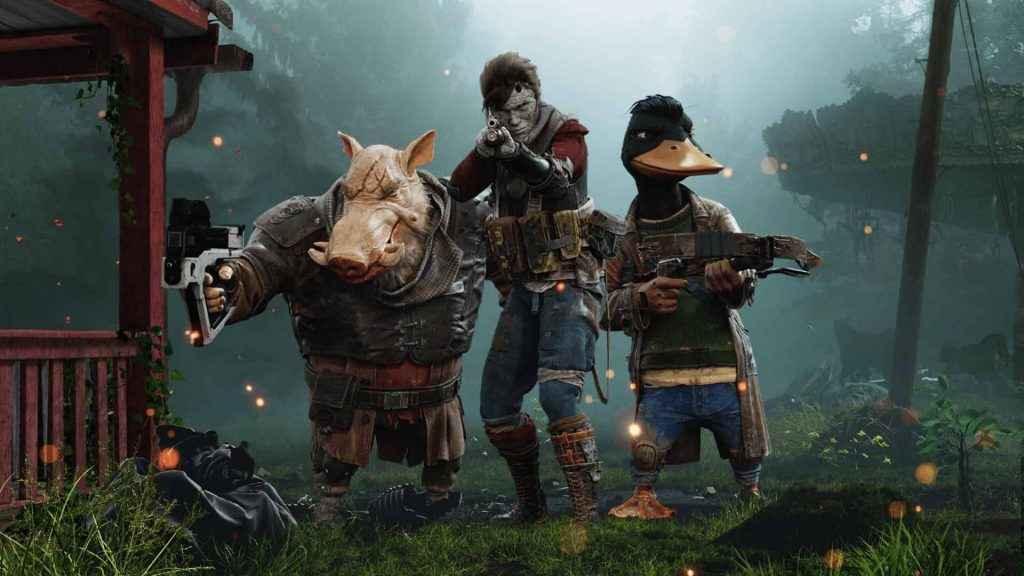 Time to be straight up with you lot. If you thumb your way through the review history of PlayStation Universe you’ll notice that my name appears precisely not once against any PS4 game that involves turn-based strategy. The reason? I suck at them. Hard.

Another and obviously more preferable reason is that quite simply I’ve just not found the setting or the mechanics in many of those genre efforts to be particularly engrossing – a state of affairs that has since ground to a halt with the release of Mutant Year Zero: Road To Eden.

An adaptation of the tabletop game of the same name, Mutant Year Zero chucks out all the usual aliens and po-faced soldier types and instead replaces them with a glitteringly charismatic ensemble of mutated ducks, pigs and foxes, as players take control of motley crew of said folks to scavenge and survive in a devastated world that has largely left humanity behind.

What’s especially charming and inviting about Mutant Year Zero’s setting is how its denizens struggle to acclimate to the relics of the past. With humans as we know them now essentially gone, and posthumously referred to as ‘Ancients’, all the trinkets, items and locations that these folk discover all carry with it an analysis that is often hilariously wide of the mark.

The discovery of a defibrillator kit for example, has members of your squad waxing quizzical about its relaxation possibilities, with one individual piping up to say how much he’s looking forward to using it when he returns home after a stressful day killing enemies and stealing their shit. It’s routinely funny stuff and in general the interactions between not just your squad, but other folks in the world (including your enemies who also frequently muse comically to one another), proves to be quite the feather in the cap for Mutant Year Zero.

I suppose if you wanted to be almost catastrophically reductive, you might say that Mutant Year Zero: Road to Eden is basically XCOM meets Animal Farm, and in all fairness you’d be not be totally off the mark. As with anything that’s worth investigating beyond an initial glance however, there is much more to Mutant Year Zero: Road to Eden than what appears to be on the surface.

As a self-confessed turn-based tactical rookie I was apprehensive about playing Mutant Year Zero to say the least. My previous experience with the XCOM games did not end well – everybody in my squad died in quick fashion and I felt like I had just wasted two hours of my life with no worthwhile result. With Mutant Year Zero however, the developer has done done a few neat little things to keep things both reasonable and welcoming to those folk who, like me, clearly need a helping hand with this sort of thing.

The first thing you’ll notice is that you can literally opt to engage in turn-based combat whenever you like – a quick tap of the square button brings up a neat grid overlay that shows spaces where your squad can move, take cover and so on. Everything is clearly marked; chances to hit your enemies are clearly shown (cover and elevated positions figure into this too), as is the amount of damage you can do and any other status effects (stun and so on) which might come into play. Mutant Year Zero is nothing if not presented well and generously accessible.

Equally there are other concessions for genre outsiders in play, too. When joined, battles do not have a turn limit by which they must be resolved (as in the XCOM games), but instead players can keep on fighting until the enemy drops dead or they do. It’s a relaxing way of doing things quite frankly, and one that makes the numerous scraps in Mutant Year Zero feel far less stress-filled than they otherwise might.

Another nod to those who might find themselves typically overwhelmed by turn-based strategy games is the fact that at any one time, you’ll never have more than a trio of squad members to look after (though you can swap out members of the group as you meet new characters during the game). Now, while tactical armchair generals might well scoff at the reduced unit count, for the rest of us this is great news simply because by having just three units to manage, the scope and execution of your strategies always feels manageable as a result.

Peer beyond the invitingly simple machinations of its turn-based tactical beats however, and other, unexpected facets of Mutant Year Zero soon begin to reveal themselves. Most pressingly, Mutant Year Zero schools players in how to cripple and reduce the effectiveness of their enemies. In practice, this means singling out wandering enemies to reduce their numbers and focusing on handicapping stronger foes wherever possible.

Speaking of which, stealth plays a huge role in Mutant Year Zero. Whole encounters can be avoided simply by sneaking past foes – which is something you’ll be doing a lot in the earlier levels where the enemies outgun and outnumber you with initially alarming regularity, while stealth when coupled with silenced firearms, also allows you to whittle down enemy forces before the opposition even realizes what’s going on.

Again, some of this will hardly seem revelatory to stalwarts of the genre, but for those who find themselves overeager or arrogantly saturated with their level of skill, Mutant Year Zero doesn’t hesitate to teach such lessons, often painfully, if its maxims of enemy attrition and considered strategy are not adhered to.

Rather than the Road to Eden, it feels like Mutant Year Zero has provided me with a road into a genre I’d thought I would never explore and for that certainly, it deserves recognition above and beyond what an ordinary review score might typically imply. And while I eagerly await the next stop on Mutant Year Zero’s train ride through PlayStation Town, in the meantime I can get back to playing the likes of XCOM with renewed vigor and confidence. Or at least, that’s the plan anyway.

Developed by The Bearded Ladies and published by Funcom, Mutant Year Zero: Road to Eden is out now on PS4, Xbox One and PC.