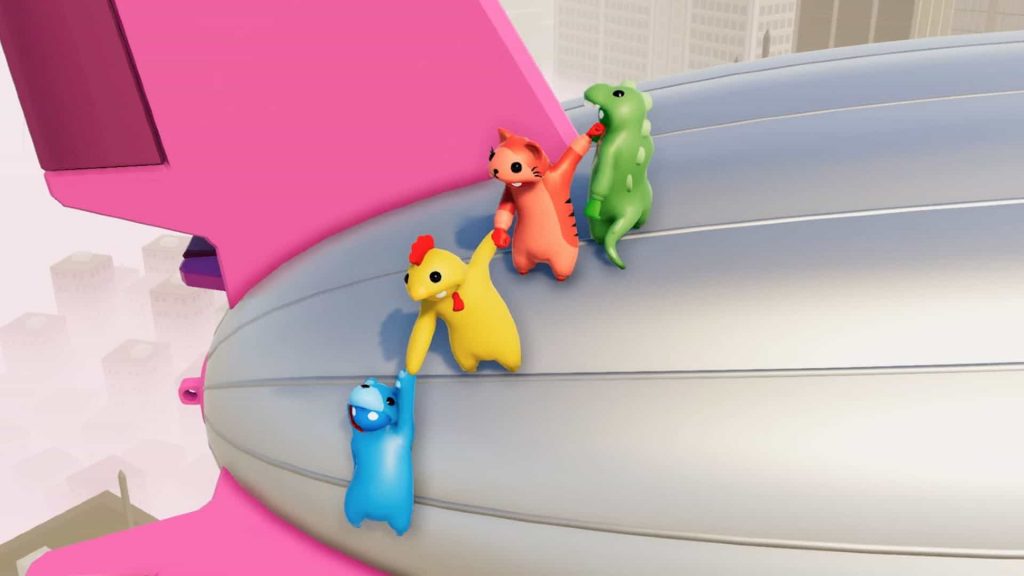 Look, we get it – the holidays can *suck*. However, one way that you can mitigate that suckitude is by playing a whole bunch of local multiplayer games on your PS4 with the friends and family who simply cannot summon up the energy for the annual holiday brain-drain. And guess what – we’ve got a whole bunch of those games for you to try below.

The Best Multiplayer PS4 Games To Get You Through The Holidays

A Way Out sees you (and a friend) taking on the roles of two prisoners. The methodical, mildly sensible Vincent, and the hot-headed and quick-witted Leo. The game begins with an establishing chapter for the pair’s incarceration. Leo is already in prison for armed robbery and assault when Vincent arrives (he’s in for fraud and a murder). A Way Out gently eases players in during this opening. It lets you do things at your own pace if you so wish, but there’s a certain satisfaction to syncing up story beats.

And in case you hadn’t picked up on it yet, that co-op play is absolutely magnificent. Players have a bit of freedom of interpretation. Yet the story also smartly forces choices that create discussion in real life about how best to proceed. No matter how significant or trivial the manner of cooperative play, it all feels so very meaningful. There’s an unprecedented level of player connection to something as simple as playing a game of Connect 4, so you can imagine how joyful pulling off more explosive set piece moments must feel.

What keeps things interesting in this co-op play is the sheer amount of variety to what A Way Out throws at you. One moment it’s catching fish from a river. The next it’s a daring car chase complete with a gunfight out of the window. The pace and mechanics shift and change without ever really becoming jarring. Bar the odd part of the intro, no gameplay section ever feels like it outstays its welcome. More importantly, every segment is a perfect fit for the co-op ethos of A Way Out – an essential title to be played with friends and family this Thanksgiving.

Death Road to Canada is insane in the absolute best way a videogame can be. A Canadian bound roadtrip set during a zombie apocalypse, Death Road to Canada has players mashing the shambling dead, scavenging supplies, meeting fellow survivors along the way and generally trying to do their utmost to survive. Where Death Road to Canada really excels though, is that its permadeath roguelike leanings mean that every playthrough is almost entirely different to the last. Then of course, there’s the mood of your party that must be managed too, as some members will agree with some decisions that you make whereas will not and thus affect the morale of the party.

In one playthrough for example, you could find yourself befriending a dog and assuming you have someone in your group who can talk to animals, that dog can then start contributing to the group by killing zombies, collecting gear or even driving your vehicle. Indeed, take that scenario to its natural end and its quite possible that you could end up with four, super-intelligent dogs driving a car with no human survivors remaining. Absurdly funny, great to play and stuffed full of value, Death Road to Canada is easily one of the most entertaining games of the year and a must for fans of zombie movies and well-constructed survival horror efforts.

And the best thing? The whole, entire game can be played with friends – allowing you to embark on your very own zombie apocalyptic roadtrip from the safety of your own home while your older relatives bang on about a whole lot of uninteresting stuff this Thanksgiving.

An initial glance at Extreme Exorcism yields a familiar impression; the game looks rather similar to the likes of fellow arena battler games such as Towerfall: Ascension and, to a lesser degree, the lesser known Paperbound. Where the two-man developed Extreme Exorcism differs from its supposed peers however, is in the ghoulishly gratifying ghost mimicking system which represents that crux of its appeal. The fact that the game has enough local mulitiplayer customisation to refloat the Titanic (or rather, whatever’s left of it), also doesn’t hurt.

Where the multiplayer offering really comes into its own though, is in how the whole ghost routine is handled. Here, the person who kills the other player gets a ghost of their own which mimics their movements much like the ghosts in the regular game do. The upshot of this is if a player falls behind on the kills it can be quite difficult to pull themselves back as the undead army of the opposing player grows, yet the flip-side is that you can actually be killed by your own ghost, creating a huge amount of unintentional hilarity as a result.

Extreme Exorcism invigorates the arena battler with its brilliant ghost mimicking mechanics, proving to be a highly entertaining proposition for either a group of friends or the lone player to stuck into. In short, Extreme Exorcism is *perfect* for some Thanksgiving multiplayer shenanigans.

A chaotic explosion of colour and simple, yet deceptively tactical gameplay, Gang Beasts is a party game like no other. Supporting up to four players via local or online co-op, the point of Gang Beasts is straightforward enough: eject your opponents from whichever of the game’s compact, hazardous arenas you happen to find yourself in and be the last person standing.

The problem is the commands, while basic, are intentionally awkward to execute. Ensuring each round devolves into a frenzied brawl full of grappling, punching, comically visceral headbutting, and last-ditch bids for survival.

Yet, as anyone who’s played it before will know, it’s this wonderful mixture of skill and random chance that makes Gang Beasts such an entertaining and genuinely hilarious party game. That and the indefinable pleasure of watching plasticine models do battle above an industrial meat grinder in what can best be described as a dystopian episode of claymation kids show Morph. Next time your friends come to visit, crack open a couple of beers and load this up. You’ll have an absolute blast.

A top down procedurally generated blaster, Helldivers has one to four players travelling across the galaxy to rid the universe of three different races of bugs, machines and, well, something else. Much more than a straightforward shooter, Helldivers has a real tactical component to it whereupon players can call down automated turrets, supplies, mech suits and more to aid in their struggle against the alien menace.

Where Helldivers really succeeds however, is in how it leverages its co-operative multiplayer beats. Quite simply, with additional players Helldivers becomes an absolute riot as you and your friends cover each others backs, take down bosses together, rush toward extraction points and *accidentally* teamkill one another.

Chuck in oodles of Starship Troopers style humor, upgrade trees for days and some of the most responsive and satisfying twin-stick shooter action this side of Nex Machina, and it’s clear that Helldivers is one blaster you can’t afford to pass up.

It’s fair to say that Overcooked! and its sequel brings out a certain… side in people that you might not usually see. Indeed, extended Overcooked sessions tend to turn Mild-mannered friends into whip-cracking kitchen dictators while meek acquaintances undergo an horrific transformation into a Gordon Ramsey style creature right before your very eyes.

The reason for this lay in Overcooked’s insanely tuned structure that is built around a simple concept; you (and your fellow chefs) are given a dish to create and you must co-ordinate everything from the ingredients, to the cooking of those ingredients and then finally the serving of the complete dish to proceed onto the next stage.

Crucially, one of the things that the Overcooked games get so perfectly right is how, in co-op, it gives everyone a role and makes them feel important. Whether you’re in charge of chopping up the vegetables, cooking the meat or even cleaning the dishes, everything you can do in Overcooked feels properly rewarding and part of a much larger plan.

Where the madness comes in is how you must not only do all of this against an ever ticking timer, but also against the environment itself as you and your team of chefs furiously aim to serve up a range of dishes in kitchens separated by two moving vehicles, earthquakes, on slippery glaciers and many more perilous locations besides. Tense, fun and rewarding, Overcooked is one of the best local co-op games money can buy; just make sure everyone has a nice chilled out beer (or ten) afterward.

What are some of your favourite PS4 games to play during the holidays? Let is know in the comments below!