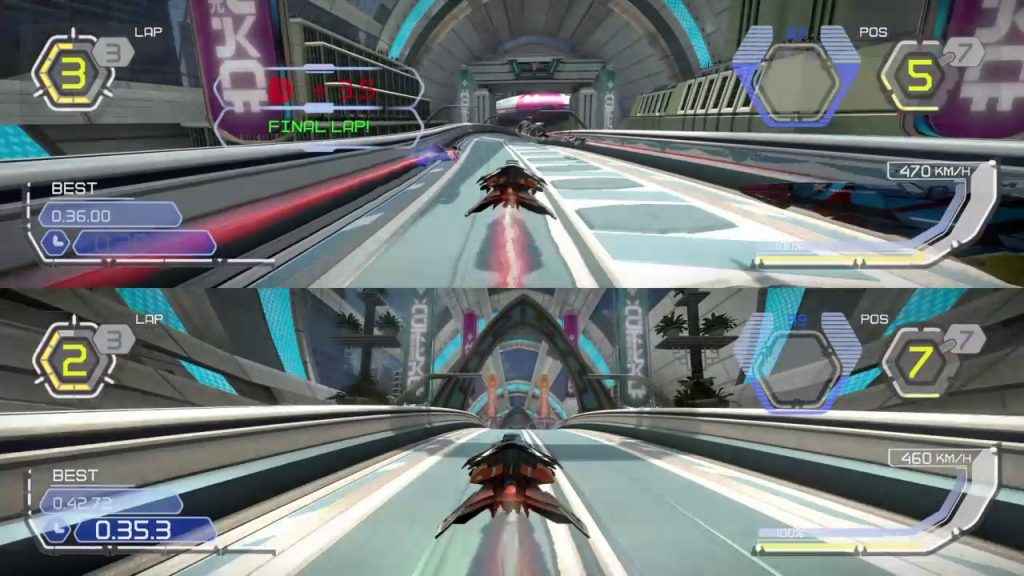 In split screen video games, two to four players can race on a single screen. This means that you can have fun with family and friends while gaming in the same room. Good time guaranteed!

On PS4, the screen is split vertically into two equal halves and lucky PS4 Pro owners get to experience all the split-screen, kart racing goodness in full 4K resolution too. Take a look at the video below and see for yourself:

Next up is PS4 exclusive racer, Gran Turismo Sport. Split screen racing is limited to just two players, but it means you can drive side-by-side in the offline multiplayer mode.

The screen is split vertically into two equal halves. Check out the video below which shows the Lexus taking on the Mercedes in a race to the finishing line.

In this fun racing game for PS4, there’s a split screen multiplayer mode for up to four players. This can be played offline only.

This sci-fi racer supports up to two players on split screen in HD, Fury and 2048. It’s an absolute blast as you whizz around the tight race track competing against a friend.

Just check out this footage of the PlayStation Access team having a blast with the WipEout Omega Collection.

Local split screen multiplayer is supported in this rally video game. Race against a friend or a loved one on the same screen in this offline mode.

Enjoy some extreme rally stages in WRC 7 as you compete for the best times across some challenging environments.

Featuring horizontal 2-player split screen, and four player, you can even play online multiplayer with Beach Buggy Racing. Powerslide around 15 tracks, picking up power-ups and destroying your rivals!

Get ready for some serious couch multiplayer fun!

So, these are the best PS4 split screen racing games that we recommend. You may also want to try out Riptide GP Renegade. If you’re looking for something a little different – a video game that involves cars but isn’t exactly racing – then try Rocket League.

Stay tuned as we add more split-screen racers to this feature, and also keep an eye on the horizon as we start thinking about PS5 racing games that would support split-screen multiplayer when Sony’s next-gen console launches in 2020.

If you know any more top games, especially multiplayer games online, let us know in the comments below!