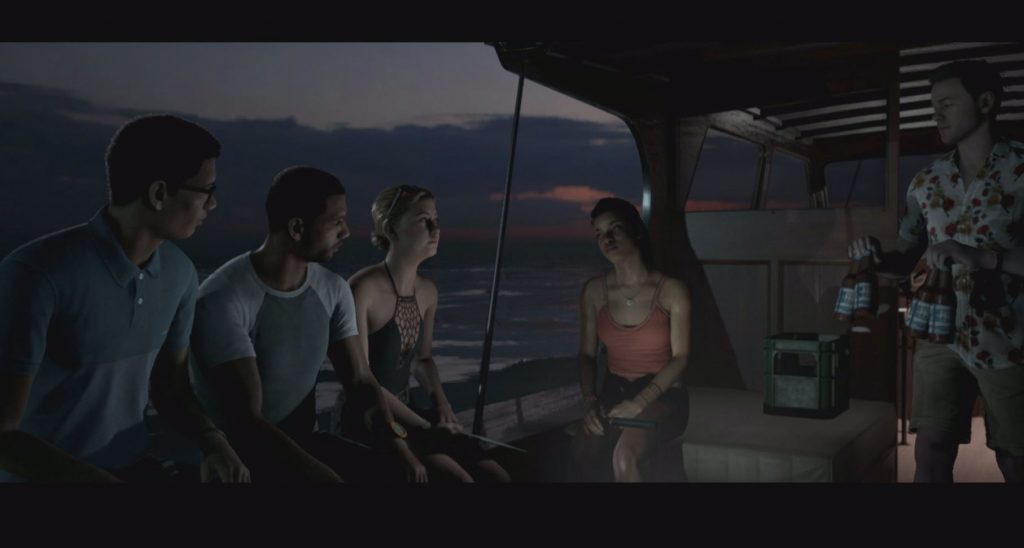 You’d be forgiven for thinking that The Dark Pictures: Man of Medan is quite similar to Until Dawn. And, whilst the core concept and the way the games play out are very similar, there are a lot of small changes and alterations that have been made by Supermassive Games that help to differentiate Man of Medan from their previous works.

And, I am going to highlight those below, so that you can go in fully prepared when the game releases on Friday.

Man Of Medan’s Horror Is A Lot More Subdued

Without going into spoilers, the horror in Man of Medan is more subdued and atmospheric than the horror found in Until Dawn. Overall, there is less of a focus on in-your-face jump scares, with more of the scares coming from sounds or mysterious and spooky things happening in the background.

In the same way, even though the five main characters in Man of Medan are young, the tone of the game is a lot more serious than the playful teen antics found in Until Dawn. You aren’t going to find them pranking each other when they have a spare moment.

Man Of Medan Is A Lot More Unforgiving With Character Deaths

I discovered this fairly early into the game, but it is a lot easier for characters to die in Man of Medan compared to Until Dawn. Out of the five main characters, I completed my first playthrough with only three of them alive. And, one of those deaths came within the first hour of the game when I missed one button prompt, leading to that character exiting the story a lot earlier than I had wanted. The second death came when I only had one path to take and that path lead to nothing but death. The point is, sometimes decisions you make a minute or so before a character’s death can lead to that said death. Your decisions have to be made much faster than in Until Dawn. The time to hit a button is noticeably shorter than in Until Dawn.

You have to be constantly on top of your game in Man of Medan and aware of what is happening. This isn’t a game that allows you to idly look through Twitter as you wait for the next action to appear. Every second needs to be spent gazing at the screen in preparation for the next button prompt. And that isn’t a bad thing.

Interactive Objects Are Worth Looking At In Man Of Medan

Man Of Medan is filled with interactive objects in the various rooms, corridors, and basements of the haunted ship the game takes place on. And, they are worth looking for and reading during your first playthrough of the game. There is a lot more lore and world-building in Man of Medan, compared to Until Dawn. And, these notes, journals, and items hold a lot of secrets about what is happening on the ship currently and what had happened in the past.

These secrets are all stored in a database under the label “Secrets” in the pause menu, allowing you to revisit them at any time to piece clues together, discover someone’s story through various notes, or just remind yourself of a detail from earlier in your playthrough. On a similar note, these secrets and objects will be updated as you find new ones, allowing you to easily picture which pieces of the puzzle connect to each other. So, be sure to check back and keep your eyes peeled for new objects to look at and pick up.

Man Of Medan Is Not Split Up Into Chapters

One of the biggest differences in Man of Medan is that the game is not split into chapters, like Until Dawn was. Whilst, you still play through chunks of the game as one character before switching to the next, the game will transition between those sections more abruptly.

Therefore, it can be a little jarring when you move from one section of the ship to another, without it being clearly illustrated to you. This does make it hard to map out the ship as well, as during a ten-minute session with the character you can move from the top level to the lower cargo decks, meeting up with characters that you thought were somewhere completely different.

As a note though, you can still replay through different sections of the game again via the menu. You are not required to start the game again from the beginning.

That covers the ways Man of Medan differs from Until Dawn. I enjoyed the game and these differences make it clear that Supermassive know what they are doing. If you want to see what we thought about the game in more detail, check out our review of Man of Medan, which praises the game heavily.

The Dark Pictures: Man Of Medan is available now on PS4, Xbox One, and PC.