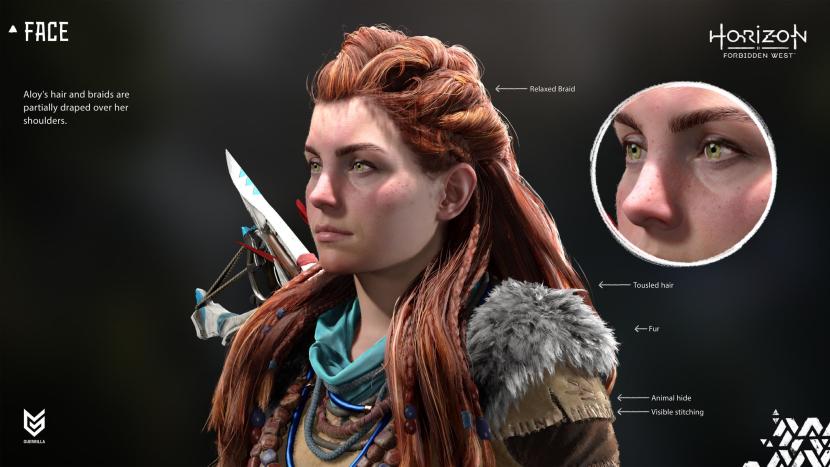 Guerrilla Games has offered a closer look at Aloy’s sumptuously-detailed character model in the forthcoming Horizon: Forbidden West, which benefits greatly from the added technical hores power of the PS5.

Having said that, the studio was quick to make note that the PS4 version of Horizon: Forbidden West won’t be compromised in any way. In fact, Guerrilla Games revealed that the game was developed and tested simultaneously on PS4 and PS5.

We actually developed and tested the game simultaneously on both PlayStation 4 and PlayStation 5, because it’s very important to us as a studio to ensure PlayStation 4 players get an equally immersive experience. With our knowledge from Horizon Zero Dawn, we knew that we still had some unexplored resources that could push the realism and quality of our character assets forward; it’s great to now be able to tap into that knowledge and experience for the sequel.

From an artistic point of view, Horizon Forbidden West really stands on the shoulders of a successfully established design foundation in Horizon Zero Dawn. The most noticeable differences and improvements for Aloy in terms of technology is the push of facial and body capture accuracy, allowing more realistic shapes and surface details on characters as well as the careful increase of polygon density to capture handmade and used outfits.

Horizon: Forbidden West is scheduled for release on PS4 and PS5 on February 18, 2022. Initially Sony did not allow users to freely upgrade from PS4 to PS5 – dual entitlement was offered, but only for the more expensive version of the game – but this quickly changed following fan backlash.