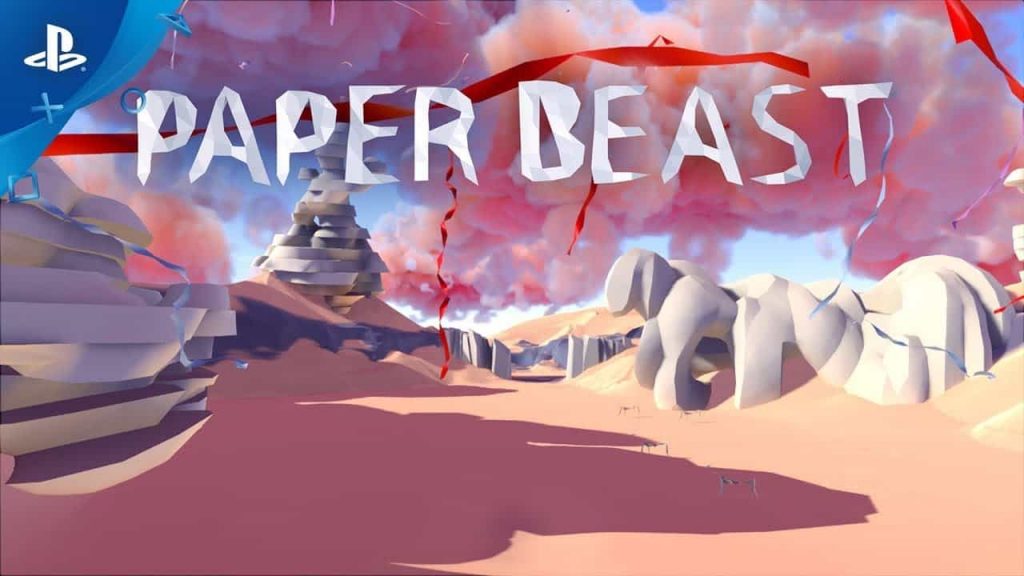 Check out the new gameplay below.

In Paper Beast, I want the player to feel like they are the first explorer of a virgin land. This is how we created the game: as a journey through a unique wilderness where no human being has ever set foot.

The game leads you to discover fauna and flora made from origami paper, folded metal, coral… Some elements seem familiar, such as water and sand, while others are more surreal, such as the creatures.

As you go through the game, you solve puzzles and obstacles, discovering a lot of surprises. The creatures help the player progress through their journey intuitively, without a word, since the game’s narrative is non-verbal.

You share a common goal with these animals: to progress and evolve in this world. You’ll create a strong bond as you interact and travel together.

This is also how we designed levels: as a journey, a migration.

The challenge was to create a credible wilderness. Thanks to our physical simulation of locomotion, the animals move as if they had muscles and bones.

This technology is the core of the gameplay: the engine calculates the creatures’ movement in real time to allow them to react to all the player’s actions. Creatures will also adapt their movements to the terrain and the obstacles on their path.

In this trailer we present how the player can manipulate the terrain to solve certain puzzles, like the creature you attract to help build a dam out of sand over the water. The ground and the various elements adapt automatically to the player’s actions. Everything is calculated in real time by the game’s engine. One of the things you can see in the video is that when you move a ball of sand, it leaves a trail on the ground.

The video focuses on a part of the game where the player helps metal creatures climb a slippery slope. The player enlists the help of the sand and nearby plants to move them. They manipulate their environment to help them progress. Once they reach their destination, the creatures use the fruit from the tree to fly away, tipping the player off as to how to continue the adventure.

The adventure you’re about to live is unique, full of surprising and unexpected events. That’s why Paper Beast is a true VR odyssey.

Paper Beast is the creation of Eric Chahi, who you probably know best as the creator of Another World and Heart of Darkness. The game was announced for PSVR earlier this year, although at the time it was slated for release in late 2019.