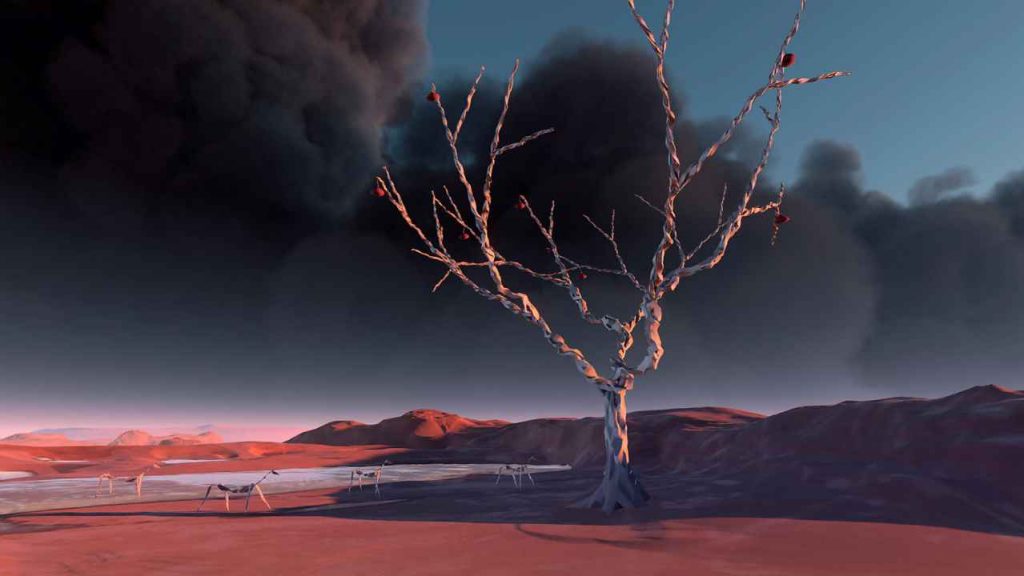 Not the sort of glory that you feel when you win a sporting event, or the glory you reap after a particularly strong performance. The glory that Paper Beast made me feel was the glory that accompanies a sense of peace and wonder at natural beauty. The sort of feeling you get when you stand on a cliff in Tennessee and look down on a sun-drenched valley. That a completely artificial construct could give me this feeling is a bit of a miracle. And maybe that’s the point.

The Spirit Of Exploration Is Strong In Paper Beast

David Scott, the seventh man to walk on the moon, was known for two Apollo missions to the moon. On his second mission as the commander of the Apollo 15 mission, Scott was quoted as saying, “”As I stand out here in the wonders of the unknown at Hadley, I sort of realize there’s a fundamental truth to our nature, Man must explore . . . and this is exploration at its greatest.”

Paper Beast embraces this sort of exploration. Much like those moon explorers, the player is delivered into the world of Paper Beast by science fiction technology made real – in this case a VR rig, which just ten years ago was definitely sci-fi. And while Paper Beast may seem at first glance like a meditative trip across a living wasteland – ala Journey – it is instead a visionary science fiction tale.

But don’t expect a story that neatly ties your adventure up in a bow. Paper Beast is wild and unexpected, but other words also apply. Lyrical. Obtuse. Metaphorical. Deliberate. And at times, inscrutable. This is a work for fans of open-ended science fiction like Under the Skin, or Annihilation. Expect beauty, but also expect weirdness. Don’t expect simple answers to your many questions.

Paper Beast drops the player into a science fiction world created by a runaway AI, a byproduct of reams upon reams of data. Somewhere, hidden like a ghost in the machine, this strange ecosystem has emerged, full of bizarre creatures and plants.

Be Patient. You Must Be Patient

Paper Beast does not tell the player how to interact with the lifeforms in this world. Only the most basic controls are available at the start of the game, and none get added later. Teleport and turn. Grab an item. Pick it up, pull it close, push it away. That’s it.

Playing Paper Beast for review, I came into the game with the wrong mindset. I’m reviewing a lot of games right now, and I was trying to get through Paper Beast quickly. This is a game that resists such ambitions. Push too hard, and you may find Paper Beast pushing back. Get frustrated at its barren environments, and you will find this open landscape sitting quietly, staring back at you blankly.

You must be patient. You must be deliberate. You must be observant. You must be experimental. Like a Jedi, you must not let anger cloud your efforts. You will be tempted to freak out. You will be tested. But that feeling you get when you finally figure something out, and are treated to a sudden turn in the game – a random flight of fancy that can only be described as magical? Glorious.

All Right, Dude. Get Down To Brass Tacks.

Okay, okay. I’ve waxed lyrical long enough. What do you do in Paper Beast? How does this game work?

I don’t want to spoil any of Paper Beast’s moments of discovery, so its difficult to dance around how the game is played. But basically, Paper Beast shuffles the player from environment to environment. In each decently sized area, there are a number of creatures and plants moving around on a dynamic landscape. It is up to the player to fool around with these creatures and plants (and the landscape) to uncover what is needed to move on.

There are puzzles at play here, but the rules are not apparent or explained. The player must use experimentation and intuition to figure out what the game is asking them to do, and then further, how to do that thing. And it isn’t always easy, friends.

For example, early in the game, the player enters a cave. Some wormy things are laying on the ground. Water is flowing into the cave. There is a dry area that looks as though it needs water, but the water isn’t flowing to that area. So, you pick up the wormy things and start messing with them. Throw them at the wall. Submerge them in water. Wrap them together to see if they make baby wormy things.

Fine, terraforming it is. You stick the shooting end of the wormy thing up on a hill of sand, and then slowly guide the gobbling head to form a trench. Bit by bit, a small river forms. After a few minutes, the water flows successfully to the dry area, the music swells, and a new pathway opens up to lead you to the next area.

Of course, this is just a basic example of the sort of mental gymnastics required to progress in Paper Beast. And it doesn’t take into consideration the game’s sudden shifts in tone, or moments of transcendent beauty. If Paper Beast were just the puzzles, it might be seeing a lower score. But no, this is a game that rewards the player for their hard work, with visual and audio treats that are as weird as they are beautiful.

Brass tacks: Paper Beast is a benchmark game. This is a game that moves VR forward, showing that the medium is good for more than just wave shooters and platformers. Put any paint brush in the hands of a master, and you will get a masterwork. Paper Beast feels like not just a game, but the end product of inspired artistic vision.

I would be remiss if I didn’t mention the sandbox mode included in the package. Players are plopped into a mid-sized arena, and allows to terraform the landscape, adding plants and animals as they go. Before long, you will have a small, but functional ecosystem. While this mode is meditative and interesting, it also feels somewhat limited after playing through the masterful campaign. Consider it a bonus, but it isn’t the main attraction.

Paper Beast Is A Benchmark

Paper Beast is an example to other VR games, a fanciful work of mood and tone that dazzles the player with amazing animation and wildly inventive environmental design, while asking them to take leaps of logic, reason, and intuition.

This is not a game for impatient players. Rather, Paper Beast asks players to revel in its strangeness. Relax and stay a while. Allow your intellect to be stimulated. Allow your feelings to be engaged. Join Paper Beast on its bizarre, transcendent parade. And if you rip a little of your hair out on the way, trust that you will be better for it.

Paper Beast is now available from the PlayStation Store.

Paper Beast is a jaw-dropping science fiction tale that immerses the player in a unique, visionary world. Though its puzzles can feel abstract at times, the rewards for completing them are great. Paper Beast is a benchmark in VR game design. This is a game that people will be talking about in thirty years.