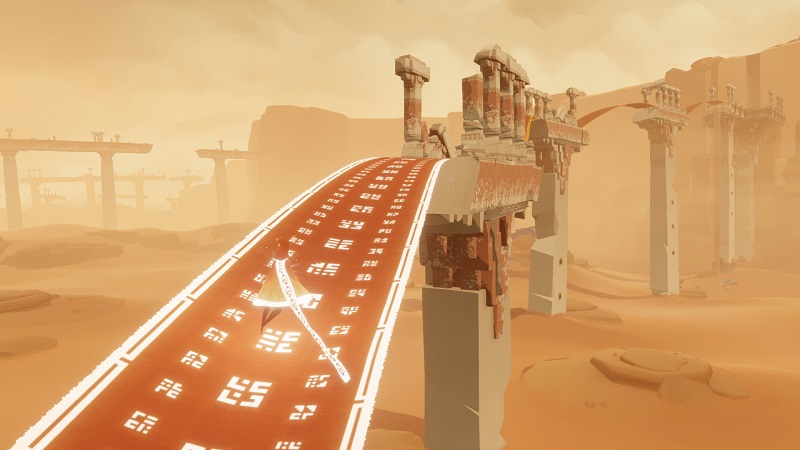 Journey on PS4 is divisive. Journey is overly artsy. Journey is an emotionally-charged masterpiece. Simply put, Journey is many things to many people. To me, Journey told a wonderful tale back in 2012. In the brief, yet perfectly paced, two hour playthrough it encapsulated its name perfectly, and despite having to go up against megahits like The Walking Dead and Borderlands 2 that year, it held its own as a truly outstanding member of the PlayStation family; to this day remains among my favourite games of the PS3 era and now we finally have Journey on PlayStation 4.

Now, in the hazy heat of midsummer’s gaming limbo, thatgamecompany’s magnum opus joins the PlayStation 4 ranks to try and captivate a new audience who were not fortunate enough to partake in it last generation. But what about those who have already experienced it? Granted, it is free to anyone who bought it on PS3, but can the game still have an impact after the initial glorious hit?

At the start of the game, where you traverse down the sand dune to begin your quest to reach the light-emitting mountain seen in the distance still holds the same magic, as Austin Wintory’s haunting theme plays out. It’s worth pointing out early on that the soundtrack is a huge player in conveying the emotional peaks and troughs of the otherwise near-silent narrative. It says things more eloquently than mere words could convey. Respect has to be paid to a game that can tell a captivating story without anybody uttering a single syllable.

Your adventure consists of the previously mentioned “journey” to the mountain, and the path there is filled with the task of your mysterious robed figure completing small, simple puzzles along the way.There is no combat, but there are dangers to contend with at certain points. All of which are there to seemingly prevent you from making that ascent.

The overarching theme of Journey is how you keep going in the face of adversity, pushing ever-onwards to that goal in a determined, single-minded fashion. It isn’t until you reach the game’s closing moments that you truly understand why this is. The short, non-spoilery version is to describe it as a pilgrimage, one that the game expects you to be joining in on beyond just pushing buttons on a controller. It’s hard to describe exactly why Journey’s narrative can be effective — even if you explain the themes in greater detail it remains something to be experienced hands on, not viewed from afar.

An aspect of it that can and should be discussed is Journey’s multiplayer. Another player can join your quest, and they simply appear without any notice being given during your playthrough (if you’re online of course). There is no matchmaking, no aggressiveness, no natural co-op structure and you only communicate through simple noises.

You won’t even know who you played with until you finish the game. It can often turn out the person you thought was your sole companion was in fact six or seven different people; as players fall behind or press on ahead they are subtly replaced. There are some genuine moments of bonding to be had, even with so little in the way of interaction. It’s a refreshingly different take on online multiplayer, one that fits Journey perfectly.

Even three years on, and on a more powerful console, Journey remains a technical treat. The simple yet elegant graphical style is timeless, looking as beautiful as it did in 2012. Towering, glowing structures and billowing fabric-like movement are constants in this world, being used in interesting ways throughout, while the way the sand shifts beneath your feet and the swirling winds above your head flapping your ever-growing scarf around are wonderfully crafted details.

The visuals are even more striking with the touch ups the PS4 provides. It’s like a series of paintings come to life, and any number of scenes would be fit to capture and stick on your wall. Journey also runs more smoothly now. It was fine before, but the difference in quality is a noticeable enough upgrade when compared to the original version.

Otherwise, there’s nothing new added to the PS4 edition of Journey, not that there would be much worth adding that could actually improve the game and, as I mentioned earlier, you aren’t paying any extra if you’ve already purchased it before. So while those like myself can treat this remaster as an excuse to revisit what made the game so memorable -and for many, a chance to join in at the start when there are plenty of other players active- this is still mainly for those that missed out entirely last time round. Journey will no doubt cause fresh debate and split opinions with those people, which is just fine, because it’s a magical game that still deserves to be discussed.

Journey is out now on PS4 and PS3.

Whether you played and enjoyed Journey before or are curious to see what the fuss is all about, the PS4 version provides a great excuse to experience one of PSN's greatest titles for a first or second time.