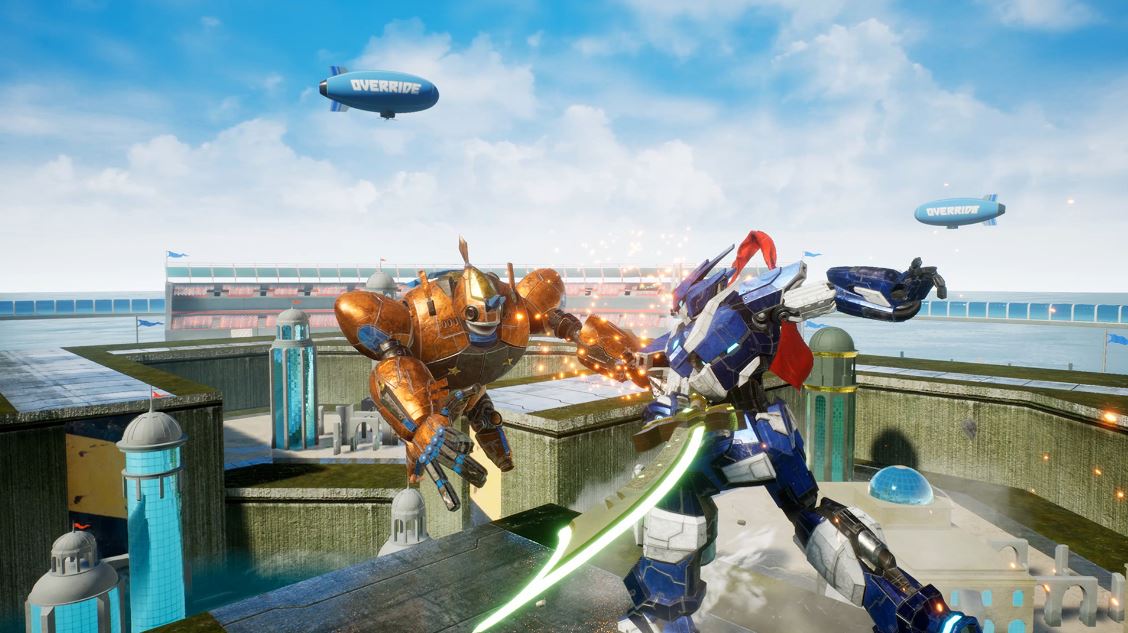 Unfortunately, Override 2 is seemingly quite shallow with a lack of interesting fighting mechanics or engaging content. And, on top of that, the PS4 version right now is an absolute technical disaster.

Combat is the name of the game in Override 2, with the game being an arena fighter. You face off against an opponent, or against two with a teammate, and battle it out in a variety of arenas to be the last robot standing. You play as a robot from a colorful cast of characters, ranging from a shiny golden, lanky construction to a smaller robot, more petite in size.

When in the arenas you have a number of standard attacks you can perform with the face buttons and some special attacks which are performed with a combination of pressing the triggers and shoulder buttons. These deal much more damage but have a long windup time.

Alongside that, you can jump and dash around the arena dodging attacks, alongside picking up weapons with the Square button which include traditional staffs and cybernetic swords to guns which can be fired from across the arena and are one of the only long-range attacks in the game. Finally, you of course have a super attack which is your simple attack faster and deal more damage.

The problem with all this combat and the moves you have is that there isn’t any skill or room to learn how to outsmart your opponents. Every single match I played during this beta devolved into me and my opponents spamming attack buttons to see who could stun-lock the other first and pull off a flurry of simple attacks or perform a special attack consistently.

Combat is chaotic to be conservative about it. There is so much attack spamming going on that it can be hard to even realise what is happening at times, especially in 2 v 2 matches, which is why every match just ends up in punches and kicks being thrown about every second, without any kind of strategy put into your actions. This is exacerbated by maps that feature exploding barrels, so when bumping into them or throwing an enemy across the arena, you have to deal with an explosion along with the group of attacks as well.

A Lack Of Evolution Or Customisation

Override 2 is also seemingly quite unsatisfying in more than just combat. From what I saw in the beta, there really wasn’t a whole lot of ways to customise your brawler or evolve them over time. The attacks on each character are seemingly what you will be left with as you play more and more hours of the game. Whilst cosmetics will be included and undoubtedly added as time goes on, the lack of variance in its gameplay is disappointing from what I saw in the beta.

Maps also became stale in the beta far quicker than I would have wanted. Whilst some shake things up with pools of lava or moving platforms, I was disappointed to find that they all have the standard circular arena form. Some do take place on multiple levels, with you having to fall down to reach your opponent or boost your way up a level, but I found these to be more annoying than interesting.

On top of that, the combination of the repetitive gameplay and simplistic combat means that there really isn’t a lot of reasons to continue playing from what I saw in the beta. And, with the lack of customisation or development needed to keep Override interesting, it seems like this sequel won’t hold your attention for long.

Originally I began by playing Override 2: Super Mech League on PS4, where I encountered some of the worst technical issues I have seen from a game in years. I will preface what I am about to say by highlighting that this was a beta build of the game and we are still a month away from its release in late December, so Modus Games has time to smooth out performance.

To put it quite simply, Override 2 ran like a mixture of diarrhoea and puke, mixed with some oil mixed in thanks to the motion blur and effects on show. I encountered more issues than you could list off on a pair of hands with the game continuously chugging and attacks being delayed as frames struggled to keep up with the amount of chaos happening on screen and the environmental explosions on the map.

Combine that with effects that blurred my vision, the aforementioned motion blur as I turned my camera, and a general discombobulating feeling as all the action on screen made it hard to see what was happening and you have a game that was unplayable on last-generation consoles.

Thankfully, the PS5 version ran smoothly and didn’t suffer from most of these issues. Motion Blur was even less obvious here. But, the game still suffers from all the gameplay issues and problems I mentioned above, so whilst it runs better, PS5 doesn’t do much to save the experience the beta offered.

Shaping Up To Be A Shallow And Disappointing Sequel

Override 2 is shaping up to be a shallow and disappointing sequel to the arena brawler, which was first used to show off PSVR and other virtual reality platforms. This was a beta, but the seemingly great lack of content and simplistic and repetitive gameplay, Override 2 is a game that doesn’t seem to be for anyone in particular, beyond children who just want to punch people, even if that someone is a CPU controlled robot.

I have some hope that the final release will fix the severe performance problems on PS4 and showcase more that the game has to offer, but with only a month till release, I am somewhat doubtful much can be done to save Override 2: Super Mech League’s launch.