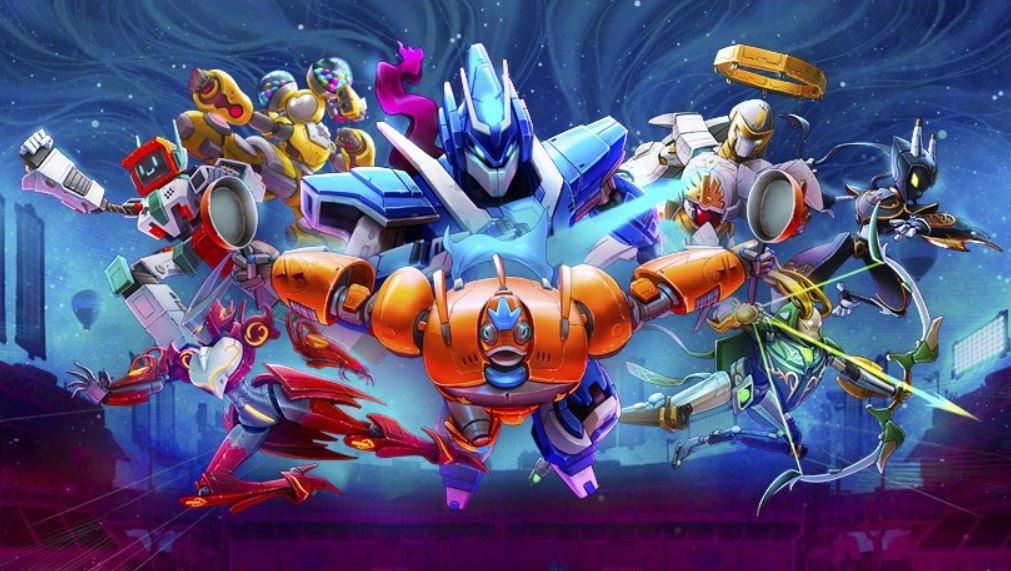 A lacklustre single-player offering, simplistic and uninspiring combat, and small technical issues are just some of the issues that hurt this brawler, ultimately making it a poor end to 2020’s year of video game releases.

The gameplay of Modus Studios Brazil’s sequel is ultimately quite simplistic and easy to get a grasp of. Each of the shoulder buttons corresponds to a different attack, split between light and heavy strikes for both kicks and punches.

You then can combo some of these attacks, such as three light strikes together to create a chain of attacks, which can pummel your enemy and send them flying to the other side of the map. Blocks can be activated by hitting Triangle and summoning a bubble shield, and you can also pick up enemies and throw them with Square.

Similarly, you can use weapons found around the map by picking them up with Square and that will then replace your standard light and heavy punches with whatever weapon you are holding, be it a shotgun, spear, or grenade launcher. 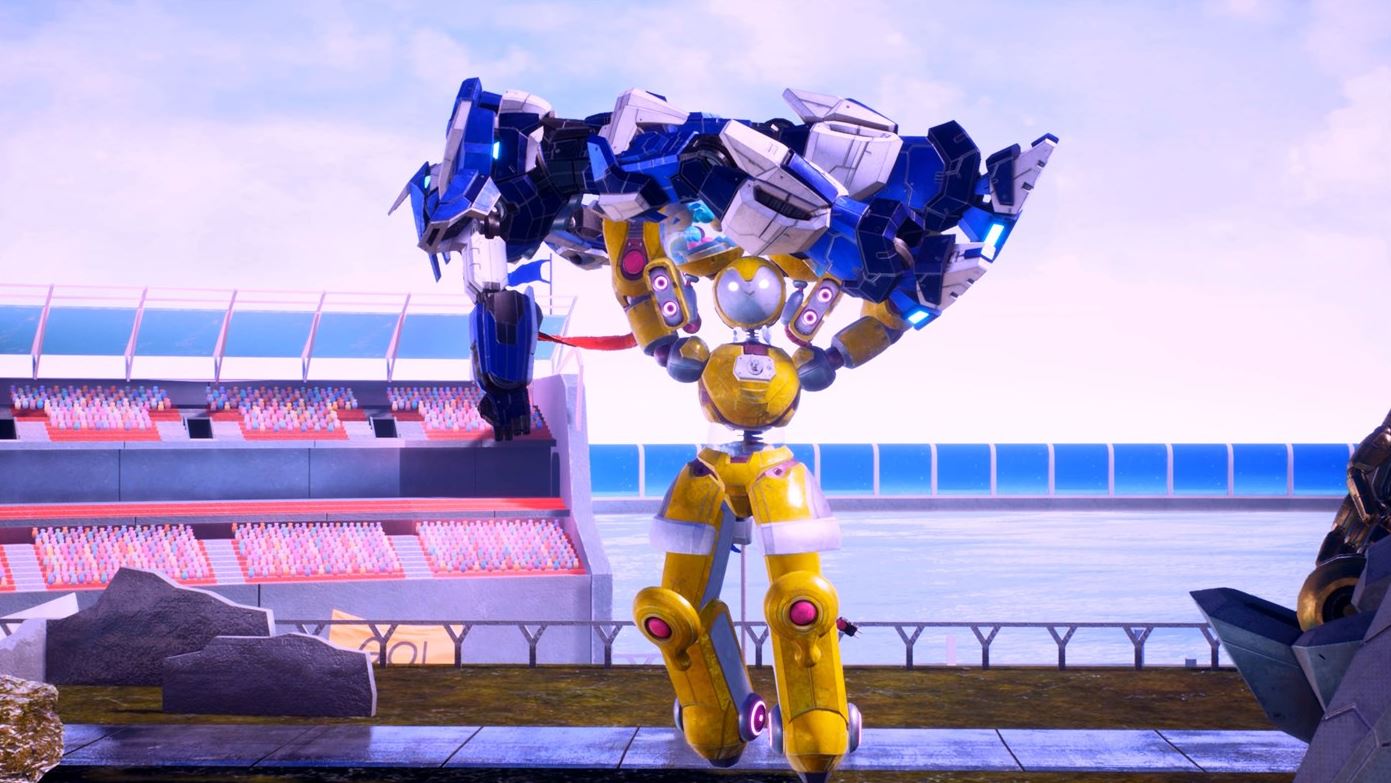 Finally, there is an ultimate attack which can be built up by standing in a glowing yellow circle that spawns around the map and becomes easier to earn the lower the health you have remaining becomes. These attacks are powerful, dealing strong amounts of damage with attacks that match the design and playstyle of each Mech.

One positive with Override 2 is that the number of Mechs on offer is extensive and each one usually has one or two attacks that help differentiate it from the rest of the pack and make each one feel like its own unique character. Their designs also add to the character of each one. Ultimately, switching between the different mechs and finding the one you like is the most fun you will have in Override 2.

The actual gameplay and brawling here are ultimately dull and lacking in a lot of areas. One-on-one fights are the most fun and feel the most balanced, but hits generally lack any kind of impact and don’t offer much on PS5 as DualSense implementation is limited and feels like the normal rumble you would have got on a last-generation system.

Free for all matches, which are made up of four players is an absolute disaster, with each person or bot spamming hits and getting to the point where if you get knocked down you will likely be pinned into an attack combo when you get back up. 2 v 2 fights are similarly chaotic and lead to the same issue, ultimately making any mode of this game a poor experience.

In general, it just feels like a combat system was thrown together and slapped onto a typical multiplayer experience, without any real thought put into whether it was fun or not, or even worked for that matter. 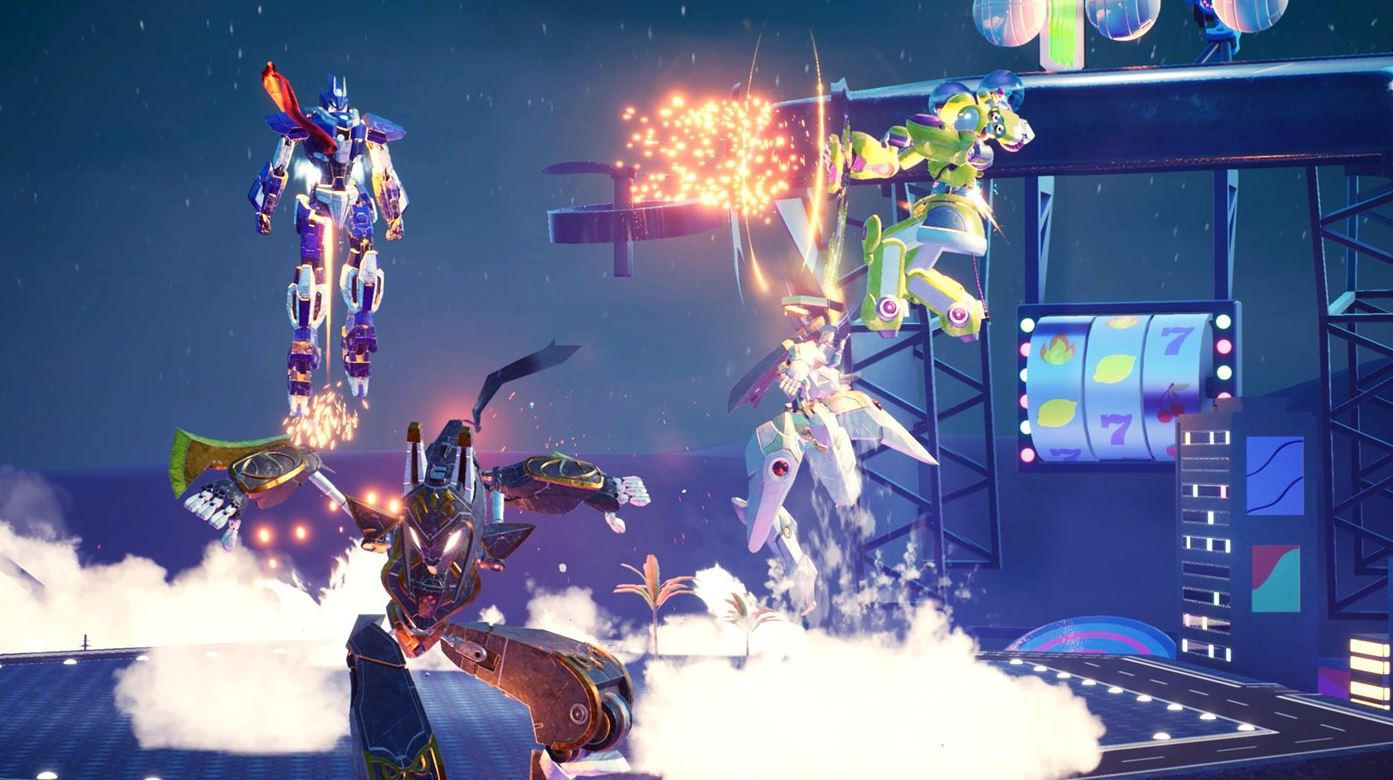 For all intents and purposes, Override 2: Super Mech league doesn’t really have any kind of story or background to why you are brawling. The one mode that offers a guided experience is called Leagues and boils down to you choosing from one of the game’s few game modes as they are randomly swapped in and out, with each mode taking the form of a different league.

You then work your way through dozens and dozens of matches, completing each of the leagues to eventually up your rank from F to E to D and so on.

In-between these matches you will be greeted by Zoe, the founder of the Ember Core agency, who talks you through how Leagues work initially and will pop in every now and again to tell you you have done a good job or if a new league appears. 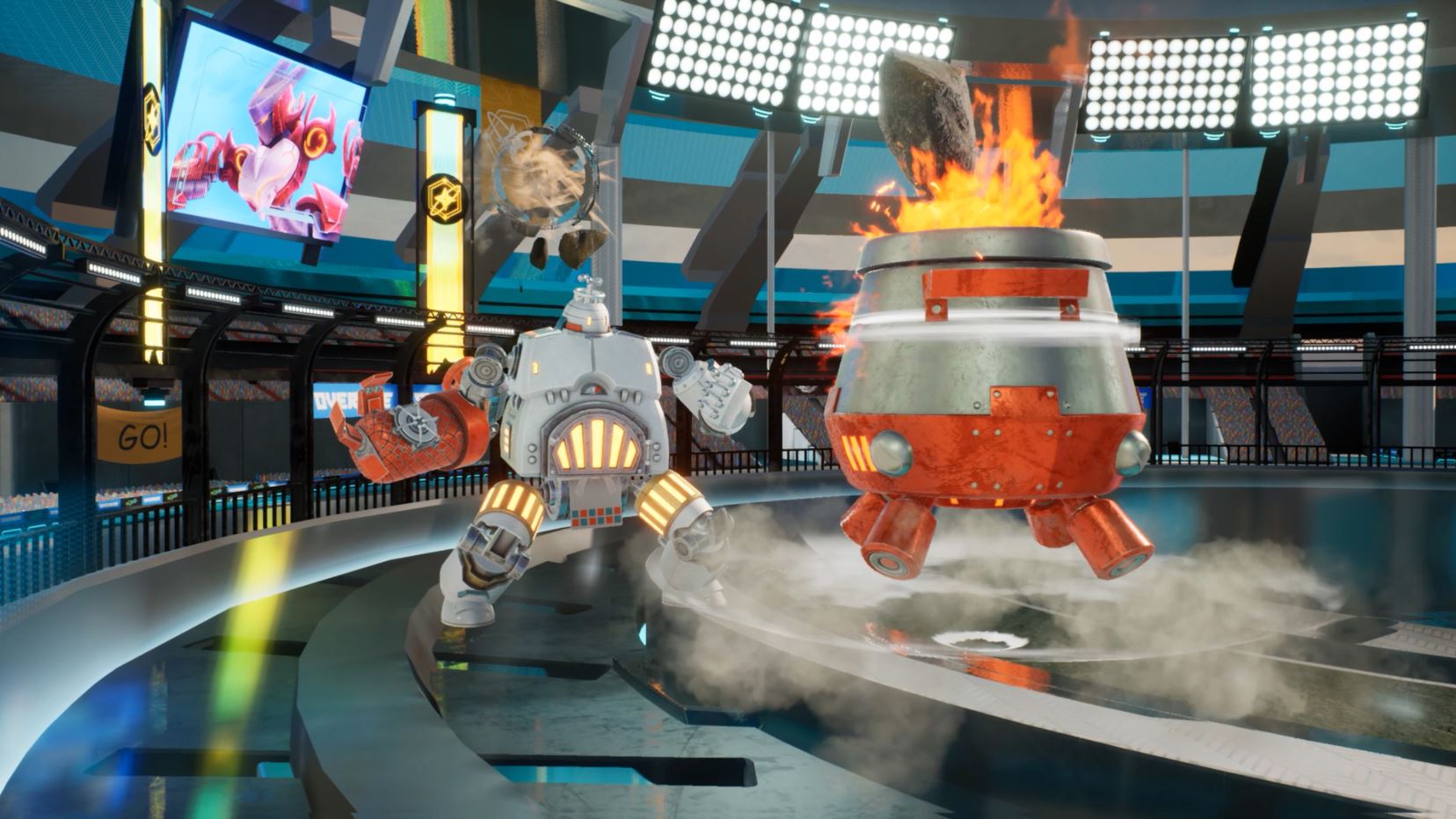 Ultimately, this experience isn’t engaging in the slightest and it effectively offers the same experience as if you were playing in online multiplayer, except this time you can play with bots, which make the games go quicker and is recommended.

Also, Zoe’s voice acting is not at all enjoyable to listen to. The writing is serviceable, but the actual audio comes through in a horrible drowned-out way, which makes listening to Zoe talk an earache, and I ended up mostly skipping a lot of it, just so I could get on to the next match.

Another baffling decision is that you will be assigned sponsors in-between matches who will offer up challenges for you like “throw 100 mechs” or “win 10 matches”. These challenges have a time limit anywhere between 15 to 90 minutes. However, that timer counts down in real-time, not time spent in games. So whilst playing Leagues you have to keep playing and rushing through matches to complete these.

Also, if you hop off in the middle of a challenge the timer will still tick down, so you will come back to the game with a failed challenge for your sponsor. Granted there doesn’t seem to be any negative for failing these challenges, but the decision is still bewildering to me.

As for how Override 2 runs, on PS5 it is certainly playable and enjoyable, but technical issues are still present. It is nowhere near as bad as what I experienced with the PS4 version in the beta and I will be giving my thoughts on that version later this week. Battles run fine, but when too much action is on screen, frames will drop and stutter. 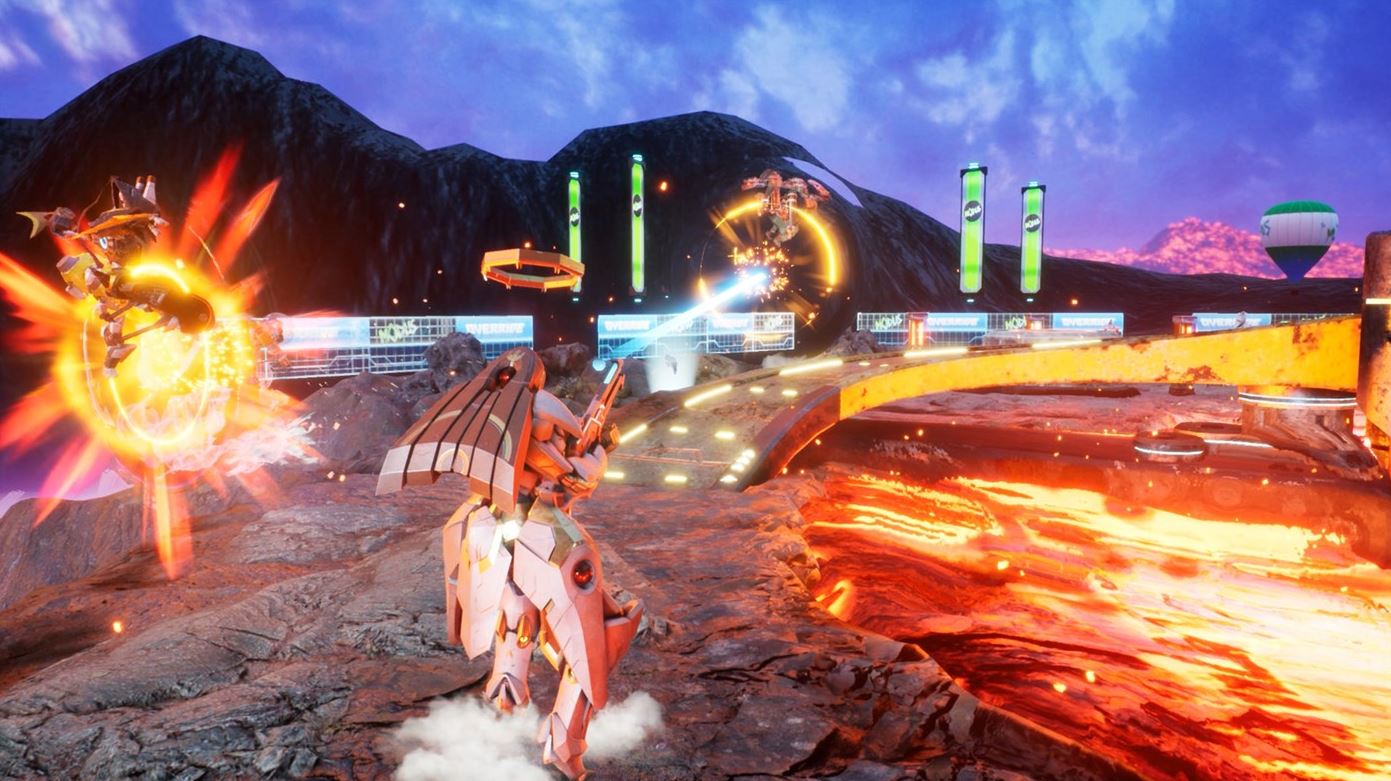 The real issues with the game though are the problems with the camera, which is wildly inconsistent and will spin around at different points to your character and it can make looking around a map incredibly difficult. If you decide to lock-on to another mech this is even worse as your camera will turn to look at them as you move around creating a fighting experience so incoherent you would think it was talking an alien language.

Exacerbating the issues during gameplay is the problem that if too much is happening on the screen, such as a lot of explosions, the visual experience is obstructed by poor looking fire effects and explosions. This creates a hazy effect and exacerbates the issues mentioned above with the camera. It doesn’t help that some maps are littered with explosive containers and obstacles, making finding your way impossible in the more frantic modes. As with the gameplay, Override 2’s systems, stages, and controls just don’t feel well thought out.

Another issue with Modus Games‘ latest title is that the playerbase just isn’t here to support an online game like this. I only ever managed to find a couple of matches with other players when playing online and that was after a 5-minute wait, which is the time you will be waiting if you want to play with others.

Luckily the game does have bots which you can choose to play against at any point, but there A.I. isn’t anything special and the game loses any snippet of a challenge it had when playing against them.

A Badly Thought-Out And Humdrum Package

As I have conveyed to you multiple times in this review, Override 2: Super Mech League feels like a game that was made up of several ideas written on a whiteboard in a meeting, that were all shoved in together in the end package, without any thought given to whether these features intermingle well, or would even work with the experience being offered with the budget the team had.

The gameplay is not enjoyable, Leagues are bland and monotonous tasks, and if you ever want to play a game you will be fighting bots the entire time. With almost no PS5 features utilised, Override 2 feels like the very definition of a product thrown out onto the street to fend for itself and forget about.

The game isn’t bad, but so much of it is mediocre that there is no discernible reason for you to even give it a try. Move on to a game from your backlog instead.

Override 2: Super Mech League is out now on PS5.

Override 2: Super Mech League is a playable game, but almost all of its parts feel poorly thought out or are lacklustre to play. The gameplay is repetitive and uninspired and the few technical issues and lack of players mean you will just be fighting bots the entire time. Ultimately, this experience really isn't worth a look.