The latest PS4 firmware update, (4.50) holds a particularly special mode hidden beneath the usual tweaks and additions that come with a standard firmware upgrade that improves your PS4 Pro games.

For PS4 Pro owners, the addition of ‘’Boost Mode’’ is a game changer. Simply put, the setting — dubbed ‘Beast Mode’ by some folks — is a blanket system solution that strives to utilize the added juice of PS4 Pro and put it to good, more general, use in games that haven’t had developer-mandated performance boosts via a patch. Basically, it makes a lot of older games run a whole lot better than before.

Bear in mind, some PS4 Pro games, like Deus Ex: Mankind Divided and The Last Guardian already have developer-created patches that hone the beneficial power of PS4 Pro so, as such, they won’t be affected by this new option.

It won’t work on all titles, mind, as it’s contingent on the architecture with which the game was originally created.

Assassin’s Creed Unity‘s surely one of the most notorious titles to ever appear on PS4. Perhaps emblematic of why annualized sequels are an issue, the game’s launch state was horrid — with a poor frame rate, glitches, bugs, and overall terrible performance throughout.

With the PS4 Boost Mode, however, the frame rate is now locked to 30fps and everything’s looking a whole lot better. It seems as though the Pro’s already working miracles.

A bit of a hidden gem in the racing stakes, Assetto Corsa’s performance is notably smoother with less frame dipping on PS4 Pro’s Boost Mode.

Omega Force’s take on the popular series, Attack on Titan, now looks buttery smooth, even in areas filled to the brim with Titans.

Probably the most common remediation you’ll see with the use of Boost Mode, Batman: Arkham Knight‘s notable screen tearing has been zapped out of existence. It still won’t rectify the over-reliance of the Batmobile, however.

Despite being a very old game in itself, Battlefield 4 Boost Mode actually benefits greatly from the improvements. 64-player Conquest online knows runs like a dream whereas before you’d see the frame rate tank once things got a little chaotic.

Sadly, Bloodborne Boost Mode isn’t going to give the fluid, 60fps feel that players have been pining for. However, it’s not all bad, as loading times and frame dipping have been considerably sewn up.

Given it’s a remaster you’d damn well expect it as standard, but BioShock Infinite Remastered now feels completely locked at 60 frames per second thanks to Boost Mode.

A game that’s had conspicuous performance issues despite the fact it’s not the most taxing of games, Broforce feels a great deal better with Boost Mode enabled on PS4 Pro. Still not perfect, mind.

Something that should’ve been rectified post-launch, some of the more hardware-intensive maps online in Call of Duty: Ghosts, Boost Mode now means it runs locked to 60fps as does the campaign which suffered slight dips beforehand.

Surprisingly, Contrast didn’t run at a completely locked 60fps upon launch. Thanks to PS4 Pro’s Boost Mode, it does now.

Like Broforce and Contrast before it, you’d expect Costume Quest to hit its stride at 60fps without making the base PS4 sweat. It didn’t, unfortunately, but now does thanks to PS4 Pro’s Boost Mode.

While it’s still locked to 30fps (a damn travesty for a remastered game) Darksiders 2’s visible screen tearing has now been wholly allayed thanks to the added power of PS4 Pro.

Praise the Sun, Dark Souls III’s frame rate has been increased a tad, which will make all the difference in those hair-splitting encounters. The frame pacing issues still exist, mind. 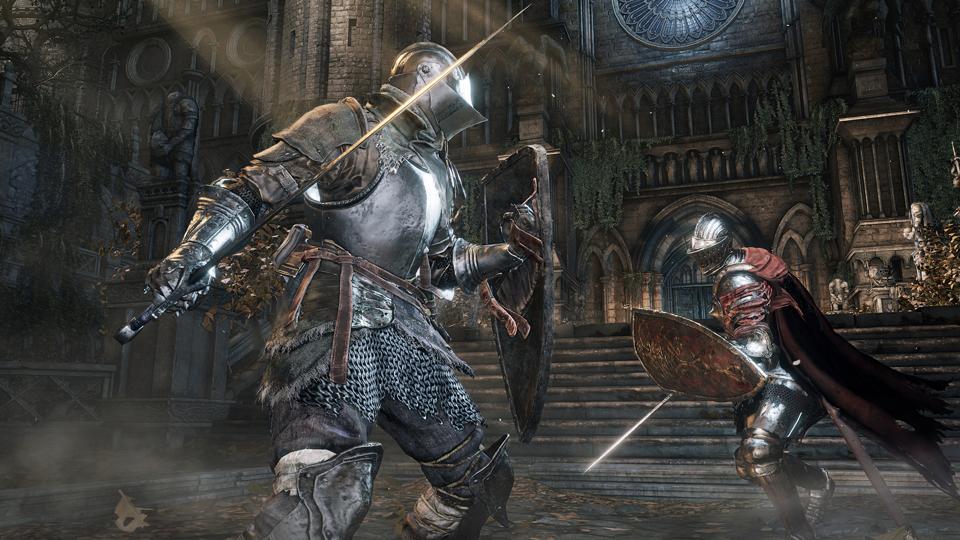 For reasoning beyond our comprehension, Daylight’s performance on the base PS4 had a lot of frame rate issues, and now, while still not perfect, Boost Mode does its best to smooth the experience.

Dead Nation’s remastered effort now runs completely locked to 60fps with PS4 Pro’s Boost Mode. Though, let’s face it, it should’ve before – even in the busier scenes.

Dead Rising 2: Off the Record

Again another case of a remaster failing to hit a certain technical milestone that one would expect, Dead Rising 2: Off the Record’s now hiccup free and running at a crisp 60 frames per second.

One of the more disappointing remasters in recent years, (from a technical standpoint) Bethesda’s stealth offering is now locked to 30fps all throughout.

Any slight dips below 60 frames per second are now a thing of the past – you can slay demons in the comforting knowledge that it’s all locked to 60fps even in the most taxing of areas.

We’re bundling these two together because Boost Mode universally smooths the frame rate of both titles. Delightful.

This is another such instance of some major improvements coming via the added power of Boost Mode; EDF’s frame rate is certainly better and load times have shortened, too.

Everybody’s Gone to the Rapture

The Chinese Room’s indie memory-based title is a little bit smoother with PS4 Pro’s Boost Mode enabled, but it’s not as pronounced a difference as we’d have hoped.

Probably the most pronounced of differences with the games tested thus far, The Evil Within was a bit of a technical mess when it was released in October of 2014. Now, thanks to Boost Mode, the game runs a hell of a lot smoother and ultimately makes it a more playable experience.

Ubisoft’s prehistoric open-world adventure title also utilizes the power of PS4 Pro’s Boost Mode to reduce that handful of frame drops that would sometimes happen on the base PS4. It’s not a massive difference, mind, as Far Cry titles are normally technically proficient.

Thanks to Boost Mode you’ll see frame rate improvements in scenes of particular engine stress, like rain and other weather effects.

For a game that relies solely on twitch-based fluid gameplay we’re happy to report that Furi has a lot less screen tearing when Boost Mode is enabled.

Those hoping for a Grand Theft Auto V Boost Mode masterclass are going to be disappointed, sadly, as there’s no real discernible difference for the most part. Though the frame rate now remains more solid during driving sections. Better than nothing, we guess.

Avalanche Studios’ Just Cause 3 takes Boost Mode’s extra power in its stride and now runs locked to 30fps — even in the more taxing (explosive) scenes. And let’s face it, that’s the majority of the game.

The Anniversary Edition of the 12-year-old Legend of Kay is now hitting its stride at a rock solid 60 fps whereas before we’d see the occasional dip or stutter.

Not even a Titan X Pascal could save this mobile port.

Screen tearing be gone, Lords of the Fallen now runs at a relatively solid 30 fps thanks to the work done by Boost Mode.

We’re beginning to see a trend of open-world games benefiting most from PS4 Pro’s Boost Mode. Mad Max is absolutely no exception — the frame rate’s now rock solid and there’s a lot less stuttering during some of more crazed moments.

Yes, Boost Mode does make the frame rate a touch better, but let’s face it, it’s not reason enough to suffer through the rest of what it has to offer.

One of our personal favourites, Abe is now locked at 60fps in the frankly beautiful Oddworld: New ‘n’ Tasty!.

Slightly Mad Studio’s pure racing simulator is certainly a looker, and thanks to PS4 Pro’s Boost Mode it’s taken another step up. Given its prowess, there’s still issues but the improvements are clear to see.

The ill-fated demo of P.T. also avails of the added power of PS4 Pro; now you can experience much smoother camera movement whilst lamented the fact that Hideo Kojima’s vision of Silent Hills will never come to fruition.

For all you Pool aficionados out there, VooFoo Studios’ Pure Pool is now locked at 60fps – and even little inconveniences like stuttering have now been rectified.

Lo Wang’s adventure is now a far more stable affair frame rate-wise on PS4 Pro. A far cry to the 30 fps average you’d get on a base PS4 during intense fight scenes.

Ubisoft’s brilliant tactical first-person shooter is now hard-locked to 60fps in Versus Mode; in Terrorist Hunt, however, things are a little more erratic with the frame rate jumping between 70 and 100 fps. You shouldn’t be able to notice that leap on standard 60Hz TVs, however.

Capcom’s third-person over-the-shoulder remaster also avails of the added benefit of Boost Mode, with the minor frame rate dips in the base PS4 version now a thing of the past.

Resident Evil’s first foray into an episodic structure also leverages the power of PS4 Pro’s Boost Mode by now running at a relatively solid 60fps. There have been reported crashes when it’s enabled, however, but chalk that up to the option still being in beta form.

Our indie darling, Rocket League, rarely ever troubled the base PS4 in the performance ranks but it’s now completely locked at 60fps whereas before we’d have slight dips here and there. Rocket League Boost Mode should now ensure PS4 players are on a more level playing field with their PC counterparts.

Oddly enough, having Boost Mode enabled in SOMA is now causing a multitude of issues, including crashes and awful performance. Best stay clear until it’s fixed. Or even just play the base version for now. It’s great.

No discernible difference with the frame rate this time around but loading times are noticeably better. Capcom still has more work to do, though.

Square Enix’s remaster of the Tomb Raider reboot also sees a frame rate boost as is now standard with most remastered titles using Boost Mode. It’s locked to 60fps and is looking lovely.

If you still haven’t gotten around to playing this PlayStation Plus free game now’s the time as the frame rate has been fixed for during traversal of highly-developed areas of the map.

Supermassive Games’ sumptuous-looking horror offering benefits a great deal from PS4 Pro’s Boost Mode, with the unlocked frame rate now ranging from 30 to 40 instead of the sub-30 we were used to on the base version.

The Vanishing of Ethan Cather

The famed ‘walking simulator’ is now locked to 60fps, even in areas where one would think there would be issues. Another title where the power of PS4 Pro’s Boost mode is evident.

For anyone still taking to the skies on a semi-regular basis, you’ll see frame rate improvements thanks to the added firepower of PS4 Pro.

CD Projekt RED’s breathtaking RPG now runs at a locked 30fps seemingly, whilst the base version struggled in certain areas of the game’s massive open-world. Loading times are noticeably improved, too.

Let’s face it, Yakuza 0 is a great game. And with Boost Mode enabled, the added power means that the minimal screen tearing and frame rate drops are now a thing of a past. You can enjoy its quirkiness unhindered.

Massive thanks to the folks over at NeoGAF and ThisGenGaming for their tireless work in compiling a lot of the list. Check back for updates as we’ll be adding more games to the PS4 Pro Boost Mode games compatibility list as we receive them.